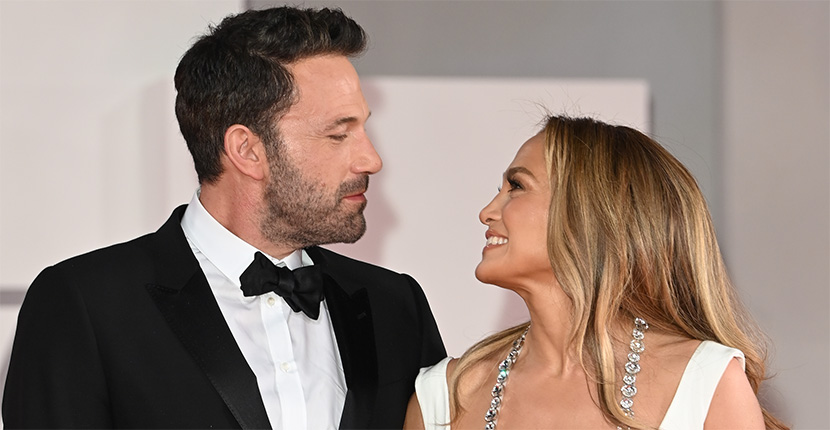 The actor proposed with a rare green diamond

April 9, 2022 (Updated April 13)—Two days ago when Jennifer Lopez was spotted wearing a giant diamond ring on the third finger of her left hand, innumerable stories were written wondering if in fact she was engaged to Ben Affleck. It was pretty clear the couple, who reportedly bought a $50-million mansion in Bel-Air, were heading in that direction.

I thought Jennifer Lopez is not the kind of celebrity—I’m thinking of you Adele—who gets engaged without telling the world the news. Well, last night J.Lo teased the announcement on her Instagram and made it official through her newsletter onthejlo.com.

The ring is something really special. When the news broke on Friday night, there were only blurry images grabbed on her newsletter and the Instagram stories of J.Lo’s sister, Lynda Lopez. The shots showed it was a green diamond flanked by two white diamond side stones.

Late Tuesday evening, J.Lo released a second newsletter about the ring with a grid of photos below. She explained:

Saturday night while at my favorite place on earth (in the bubble bath), my beautiful love got on one knee and proposed. I was taken totally off guard and just looked in his eyes smiling and crying at the same time trying hard to get my head around the fact that after 20 years this was happening all over again, I was quite literally speechless and he said, “is that a yes?’” I said YES of course that’s a YES.

I was smiling so big and tears were coming down my face, feeling so incredibly happy and whole. It was nothing fancy at all, but it was the most romantic thing I could’ve ever imagined…just a quiet Saturday night at home, two people promising to always be there for each other. Two very lucky people. Who got a second chance at true love.

Green has always been my lucky color and now, for sure, it always will be. 🍀💍💚 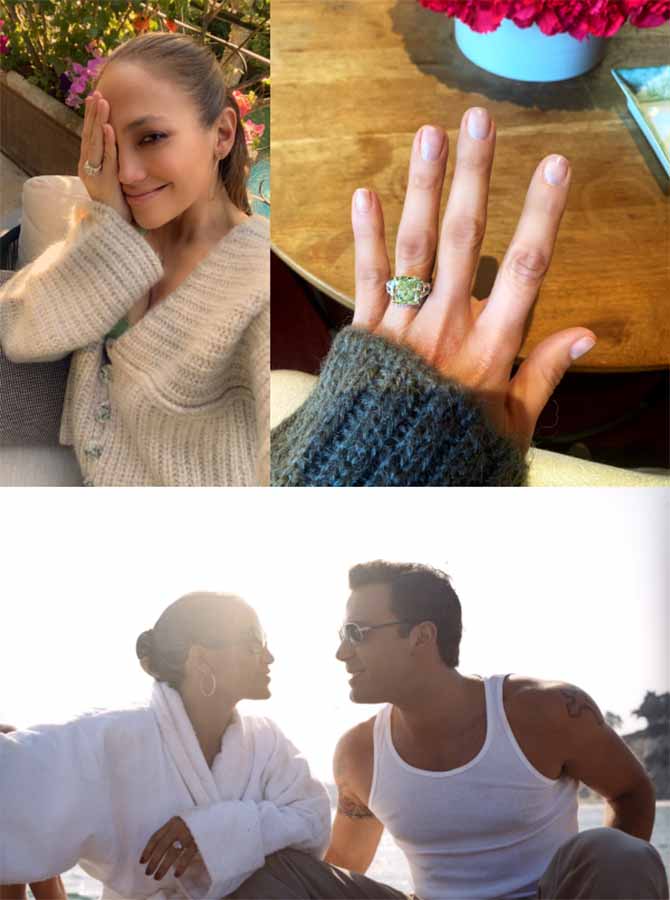 While pink, yellow and light brown diamonds have all been chosen by celebrities for engagement rings, this is the first time a celebrity has ever received a green diamond which falls into the very rare category.

It certainly draws parallels to the pink diamond engagement ring Ben gave Jen in 2002. At the time the public at large wasn’t generally aware of the fact that there was such a thing as pink diamonds. The couple’s ring literally changed that overnight. The impact was huge.

There is, however, a big difference between the pink diamond and this new green diamond. At the time Ben gave Jen the pink diamond, the fancy color was being mined as steadily as it ever had been in history through the Argyle mines in Australia. While the stone was still rare it did have some visibility.

Green diamonds are an entirely different story. You know how once a celebrity is engaged the news is followed by a raft of articles on how to get the look? That’s not going to happen with this ring because green diamonds are really rare. And they come in many different shades of green. The biggest green diamond I’ve seen recently was a mossy green 10-carat heart shape diamond ring in the collection of Nadine Ghosn.

Historically the most famous green diamond is the 41-carat Dresden Green diamond that came from the Golconda mine in India. The apple green gem was mounted in an elaborate white diamond hat ornament in 1768.

The Dresden Green made headline news in November 2019, because it wasn’t stolen. The jewel was on loan to the Metropolitan Museum of Art in New York when several important jewels were taken by brazen thieves from the Dresden Green Vault in Saxony where it is normally housed.

In search of a green diamond in the same color palette as J.Lo’s jewel I looked on the big auction house websites and only came up with one sold at Sotheby’s that feels somewhat similar. The stone in the picture above is described as a “a fancy intense green-yellow diamond.” It’s a bit more yellow than J.Lo’s green diamond.

In terms of record sale prices for green diamonds at Sotheby’s, it is hard to compare because of the different grades of green. A 2.52 carat fancy vivid green diamond sold for $3.1 million in Geneva during the November 2009 sale. It was a world auction record price per carat for a vivid green diamond at the time.

Last year, a pear-shaped fancy intense green diamond weighing 5.29 carats sold for $3 million at Sotheby’s in Hong Kong. The price was inclusive of pink diamonds in the setting. The two fancy shapes are often paired together in jewels. An exceptional 3-carat fancy vivid bluish green diamond in a pink diamond ring is going to be sold at Sotheby’s in Hong Kong on April 29. The estimate is also around $3 million.

I did a quick search on Harry Winston where Ben got the famous pink gem. They have zero green diamonds on the website.

De Beers Forevermark, the diamond jewelry company known for their rare colored gems has no green diamonds available, but they do have some information. The website explains only “a handful of green diamonds come to market each year” and goes on to add:

A natural green diamond’s color does not develop until the end of their journey to the earth’s surface. The color comes from natural irradiation, usually caused by alpha particles. Absorbing red and yellow light causes the diamond to reflect a green hue, however this is usually confined to a very thin layer at the surface of the original rough diamond so it’s very rare that the green color will be present throughout the diamond.

Call me romantic, but somehow this description of a diamond gaining its green color at the end of its journey to earth makes the stone feel just right for Ben and Jen who rekindled their love affair after over 20-years apart.

How J.Lo’s Pink Diamond Changed Everything

Let’s Talk About J.Lo’s Engagement Ring From A. Rod

J. Lo’s Diamond Jewelry In ‘Marry Me’ Is Major