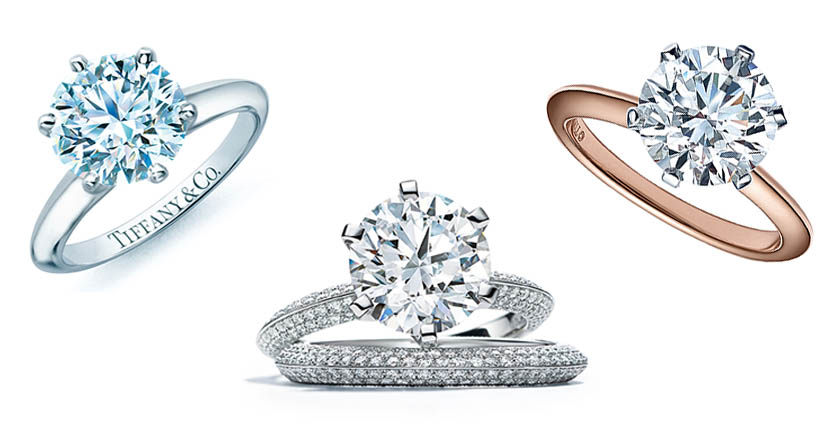 How the Tiffany Engagement Ring Became an Icon

A look at the history and new engagement ring styles

October 10, 2016—It is difficult to get your head around just how long ago Charles Lewis Tiffany invented the most iconic engagement ring of all time. The style dates back 130-years. To put the end of the nineteenth century period in context, ten years before the ring debuted, Alexander Graham Bell received a patent for his invention of the telephone. In 1886, the year the ring became available, the Statue of Liberty was open to the public and Coca-Cola appeared on grocery shelves for the first time. Like those other American icons from the era, the Tiffany Setting has endured.

Founder Charles Lewis Tiffany conceived the Setting to glorify a solitaire diamond as a symbol of everlasting love. The meticulous design had six-prongs lifting a round shaped diamond above a slender gold band. It put a diamond on a pedestal and let it shine.  Light could literally pass between the ring prongs and though the diamond, heightening its brilliance. This chic and beneficial engineering was a departure from other engagement rings that held a stone close to the band. The unadorned metal was another breakaway from the ornate engraving and embellishments that decorated engagement rings of the period. Mr. Tiffany didn’t want anything distracting from the diamond’s beauty.

With the completion of the design Tiffany became the first jeweler to create a signature engagement ring. Mr. Tiffany was so confident in the ring’s appeal he put his name on it. Then he presented it in his unique way. 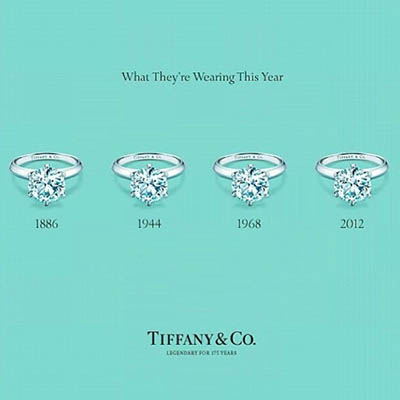 During the turn of the century, a vast majority of fine jewelers focused on masterpieces for elite clients. In contrast, Mr. Tiffany had an iconoclastic American approach. From the moment he established the company in 1837, he maintained a stunning variety of designs in a range of prices. When it came to the Tiffany Setting, there was an array of diamonds in different sizes to accommodate any number of budgets. No matter the price Mr. Tiffany ensured a special experience. Honoring the importance of purchasing an engagement ring, a diamond expert carefully explained the qualities of the stone and details of the Tiffany Setting.

An instant success, the Tiffany Setting has remained steadily in demand for 130 years. The expertise and warmth Tiffany adds to the most meaningful jewelry purchase in anyone’s life has been mythologized in movies, written about in books and made all kinds of popular culture appearances. Take a look at the engagement ring emoji on an Iphone. It’s a solitaire with six prongs. Tiffany’s is so closely associated with the bridal category because of the ring, countless grooms have obtained their bride’s ring from Tiffany and then proposed right in front of the Fifth Avenue flagship in New York City.  A modern tradition that’s captured in the high-spirited documentary Crazy About Tiffany’s.

In celebration of the 130th Anniversary of the Tiffany Setting, Tiffany has launched two new editions of the design. For the first time, a rendition of the Tiffany setting has been launched in rose gold. There is also limited edition of 130 Pavé Tiffany Settings. The deluxe design has pavé-set diamonds all over the signature knife-edge platinum band. It can be ordered with center stones ranging in size from 1.5 to 6-carats. A pavé-set diamond and platinum wedding band has also been created to make a stunning matching set.