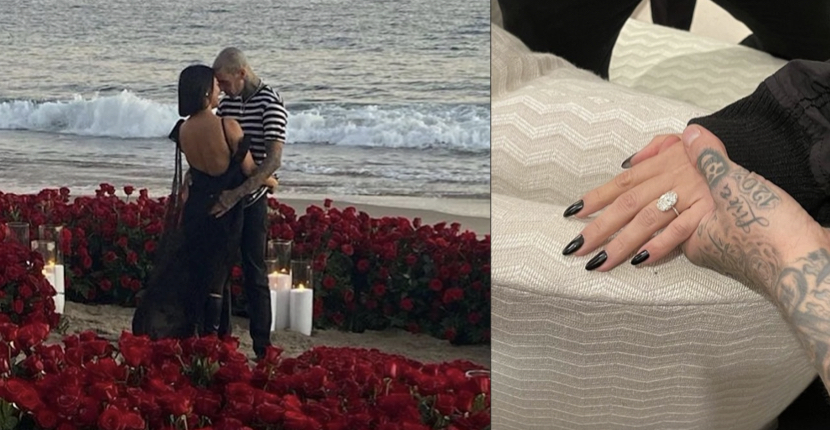 Kourtney Kardashian and Travis Barker on the beach after becoming engaged and detail of the engagement ring. Photo Instagram

The designer is a friend of the family

October 18, 2021—It was like the proposal heard around the world: Blink-182’s 45-year-old drummer, Travis Barker, proposed to the eldest 42-year-old Kardashian sister, Kourtney, last night. The PDA-loving-punk-styling duo, who have been officially an item since January but friends for much longer, are taking their romance to the next level.

The coverage of the proposal, the ring, who will be at the wedding, what the ex-spouses and lovers of the couple think of this turn of events and every possible angle have been all over the internet and covered by media outlets ranging from Vogue to the New York Post and everything in between.

I will give my thoughts on the jewel in a moment but first let’s analyze the overall situation.

I have never watched Keeping Up With the Kardashians, except that one episode when Kanye proposed to Kim at the AT&T baseball stadium in San Francisco. It was quite something to see the Kardashian’s favorite jeweler and family friend, Lorraine Schwartz in attendance with her sister Ofira. Her presence was a clue to the family that something was up. Of course, Lorraine made the amazing ring Kanye gave Kim, but I digress.

The photos Kourtney posted on Instagram to announce her engagement to Travis were not the standard fare. The couple stood in an embrace surrounded by a hedge of roses and candles on a beach in Montecito, California.

My first thought was it felt like a moment for a reality show. Then I thought, no. It couldn’t be because the Keeping Up With the Kardashians ended. Guess what? I did a little Google search and the Kardashians have a deal inked with Disney to do a new show on Hulu. It is quite likely we will learn more about this engagement evening when the show debuts.

One thing my jewelry-centric-self found surprising was that the engagement ring didn’t appear in either of the couple’s initial Instagram posts on the grid. The ring shot is usually the money shot. The confirmation of all that has transpired. Perhaps that slide it on the finger moment is something they wanted to save for the new show.

We did, however, see plenty of Instagram Stories featuring the ring from people who were present at the celebration dinner which seems like it took place immediately after the proposal. Kim Kardashian and Kendall Jenner were there. And so was Barker’s daughter Alabama Luella Barker and Atiana De La Hoya, Barker’s stepdaughter when he was married to Shanna Moakler.

From all these angles, so-called engagement ring “experts” are making calls on the carat weight and the price of the oval-shaped center stone all over the internet.

Most say it is over 10-carats. And I agree on that call.

Some have said the gem costs as much as $1-million. Sure, it is possible but that figure also makes a nice headline. It could be, and most likely is, significantly less.

The “experts” say it looks like a high-quality gemstone. That is a fact. Even in blurry images you can see this is a great looking diamond.

People believe the ring is pink gold. I think that could be right but it is hard to say.

The one missing question I have not come across is who designed the jewel.

Usually when I am looking at a celebrity’s engagement ring, I have a couple of guesses. In this case, I am going to go out on a limb and say I believe the ring is by Lorraine Schwartz.

The sophistication of the design with the perfect stone set on a delicate band is a signature of Lorraine’s glorious engagement rings. Lorraine is known for her great looking oval shape diamond engagement rings. Blake Lively has one from the jewelry designer.

Lorraine is also a very good friend of the Kardashian family. As I said she was responsible for Kim’s first ring from Kanye. While Lorraine didn’t appear on social media today covering the engagement ring. I would not be surprised at all if she showed up in the new Kardashian Hulu show.

Kourtney and Travis were in New York on Saturday for his appearance on Saturday Night Live. It is quite possible he picked up the ring while he was in the city from Lorraine.

*The evening of October 18, after this post went live, Lorraine Schwartz confirmed to People magazine she worked closely with Travis on the design of the ring. Jewelry mystery solved with a very happy ending.