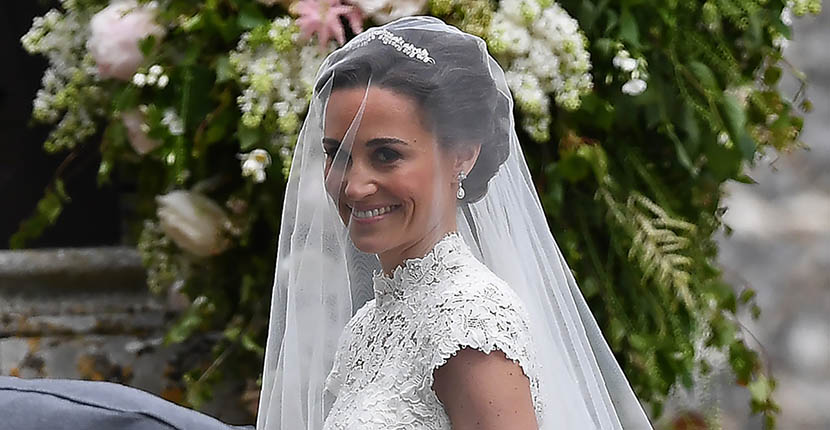 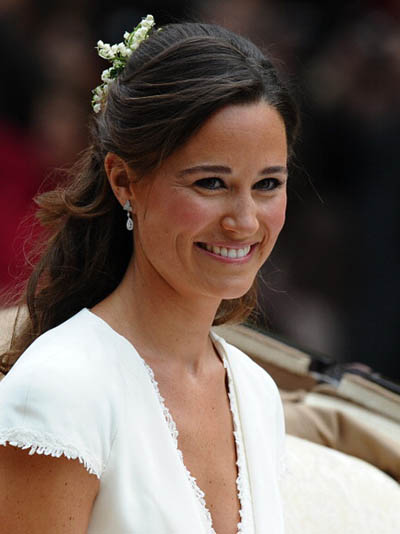 As the maid of honor at her sister’s royal wedding in 2011, Pippa Middleton wore the same Robinson Pelham earrings she chose for her wedding day, May 20, 2017. Photo Getty

Pippa Middleton’s wedding to James Matthews may not have had the grandeur of her sister’s nuptials at Westminster Abbey but it made up for it in charm.  The picturesque setting in the Berkshire countryside at St. Mark’s church looked like something out of a great English movie—think Four Weddings and A Funeral—or the happy ending of any Jane Austen production.  Flowers covered the doorway of the quaint location where Prince William, Duchess Kate, Prince Harry and tennis star Roger Federer were among the 300-guests for the May 20, 2017 ceremony.

The bride dazzled the crowds and press waiting for her appearance in a lace gown by Giles Deacon with a high neck and cap sleeves.  Her updo was accented by a Maidenhair Fern tiara from the London jeweler Robinson Pelham.  As the Middleton family’s favorite jeweler, the hair accessory could have been the bride’s ‘something borrowed.’  While her earrings, also by Robinson Pelham, might have played the role of ‘something old.’

The delicate jewels with a pear-shape diamond drop suspending a floral motif were commissioned by Pippa’s parents on the occasion of Kate Middleton’s wedding to Prince William in 2011 and clearly have sentimental value.  She wore them along with her famously well-cut Alexander McQueen gown when she was a bride’s maid to her sister.  Kate’s bridal earrings from the jeweler were a bit larger with an acorn and oak design, reflecting the motifs in the family’s crest. 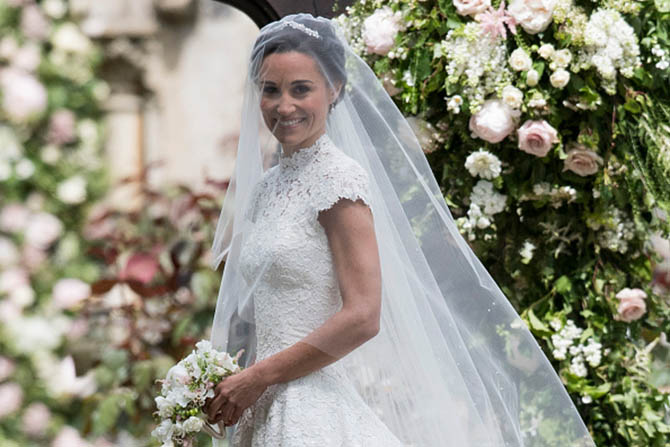 Pippa Middleton arrives to her wedding ceremony in a Giles Deacon dress, a delicate tiara and diamond earrings by Robinson Pelham. Photo Getty

While it has never been confirmed, it is believed Pippa’s art deco inspired engagement ring is also from Robinson Pelham.  It features an approximately 3-carat Asscher-cut diamond surrounding by a halo of round diamonds.  The metal is white.  It’s not know if it is platinum or white gold. 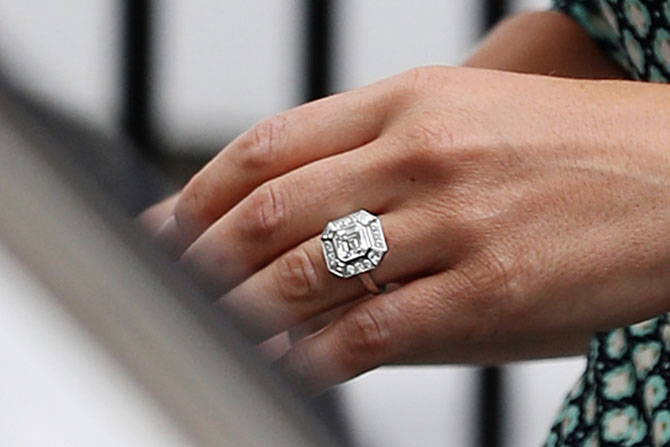 The Duchess of Cambridge, who doesn’t dip into the crown jewelry collection like Princess Diana once did, wore one of the many English jewelry designers in her collection.  She coordinated her peachy pink Alexander McQueen mid-length dress and Jane Taylor hat with pear-shape morganite pendant earrings by Kiki McDonough. 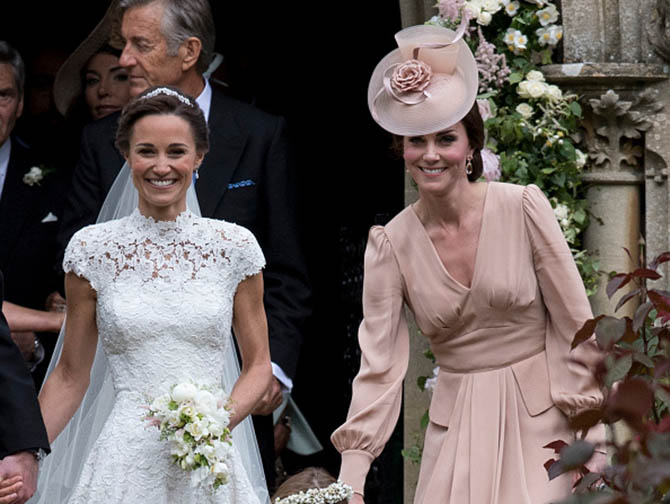 It was all picture perfect down to the adorable wedding party of children including Prince George and Princess Charlotte. 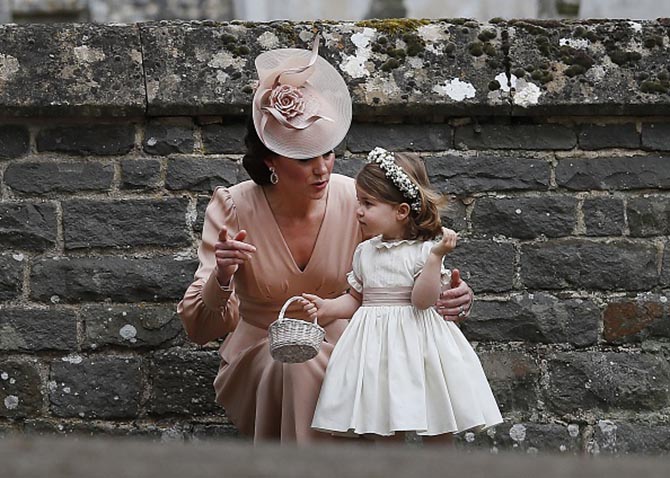 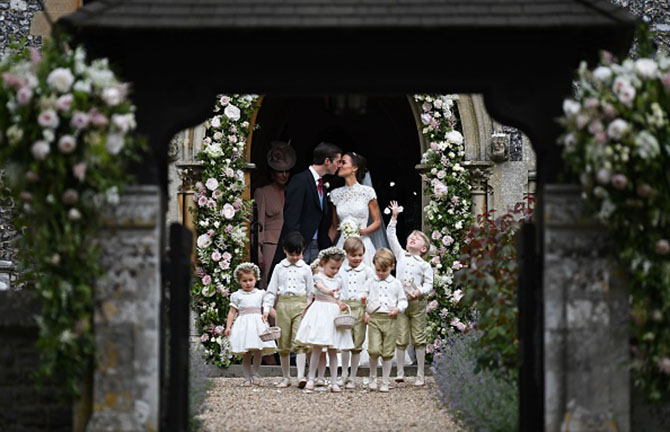 James Matthews and Pippa Middleton kiss after the ceremony. The children in their wedding party include Prince George and Princess Charlotte. Photo Getty 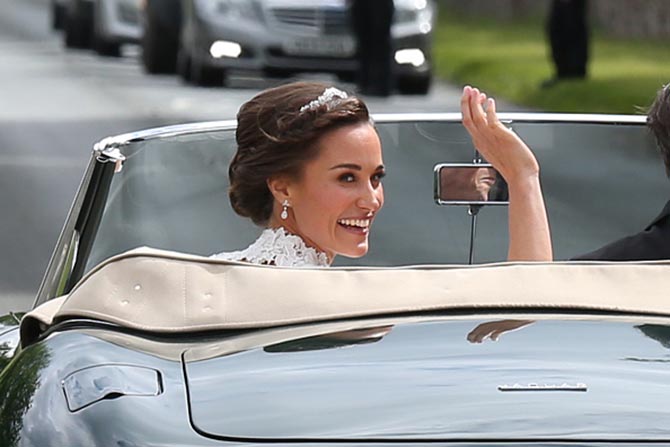 Pippa Middleton in a tiara and diamond earrings by Robinson Pelham driving away from the church with her new husband after her wedding ceremony. Photo Getty