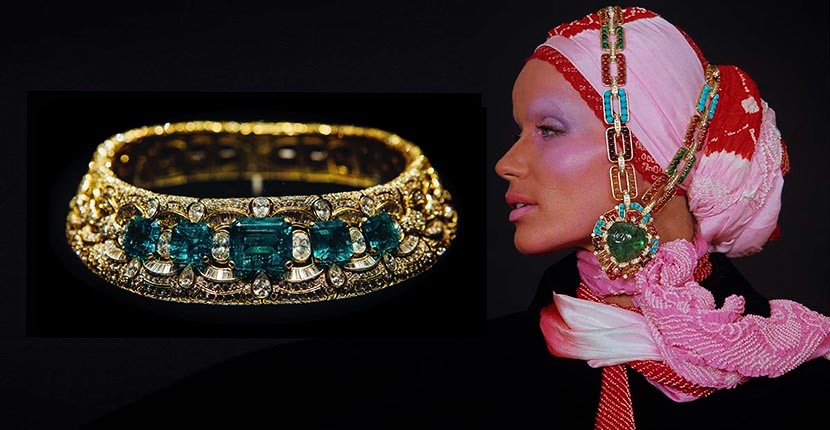 An emerald and diamond choker made by Bvlgari in 1989 and Veruschka wearing the gem-set Bvlgari sautoir on her heard in an iconic 1970 image by Franco Rubartelli. Photo Bvlgari and Franco Rubartelli, Conde Nast Archives, Getty

‘BVLGARI The Story, The Dream’

Is an epic exhibition staged in two museums in Rome

I vividly remember when the first book on the history of Bvlgari was published in 1996. In addition to being thrilled about the publication by Amanda Triossi and Daniella Mascetti, I was shocked by what Paolo and Nicola Bulgari wrote in the introduction. They said, “When the idea of publishing a book dedicated entirely to Bulgari was first mentioned, we were afraid that diving into the past to find our roots would have infringed a fundamental rule we have always tried to follow: to look ahead, to think of the future and to innovate, revolutionize and modernize.”

Back then, I didn’t fully understand the initial reluctance, but now I get it. The Bulgari brothers were still in the midst of creating history. They had been witnesses and participants to the most dynamic years at the firm. Bold forward motion had always been part of the formula for success.

Obviously, the Bulgari brothers saw the value of the book and did go on in the introduction to explain, “Further reflection led us to admit that despite everything, after over more than a hundred years of history, the moment had arrived to go in search of those roots for, perhaps, they are directly correlated to our present.” 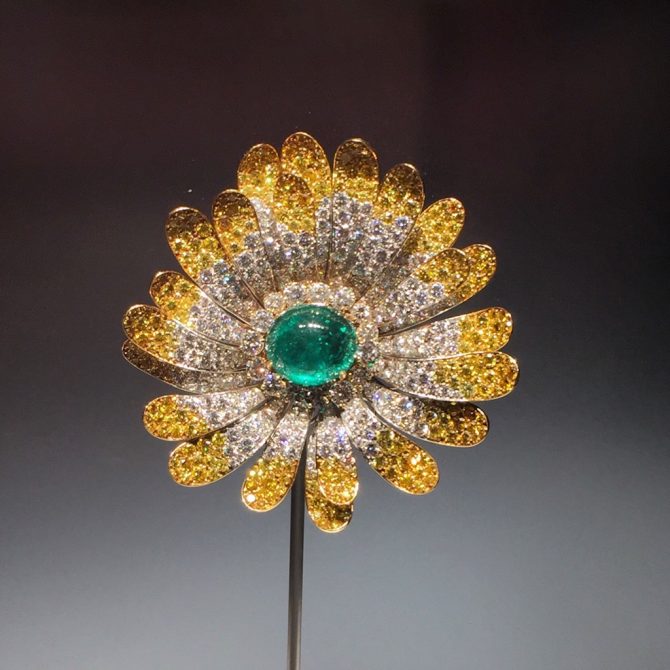 A big flower brooch made by Bvlgari in 1969, and set with an emerald, white and yellow diamonds in platinum, shown on display in ‘BVLGARI, The Story, the Dream.’ Photo Marion Fasel

After the great success of the first Bvlgari book, the firm went on to establish a Heritage Department. Slowly and steadily they bought back great jewels and built a stellar team of specialists. For the celebration of the 125th Anniversary of the firm in 2009, Bvlgari staged its first solo museum exhibition. Since that initial blockbuster presentation, the pace in the Heritage Department has picked up considerably with any number of museum exhibits around the world. There have also been quite a few publications including, Bvlgari: Treasures of Rome by Vincent Meylan, Bvlgari: The Joy of Gems by Vivienne Becker and the Bvlgari Collection Trilogy on the icons, Serpenti, Bvlgari-Bvlgari and Monete, by yours truly. Each publication has taken a look at a different aspect of Bvlgari’s history.

BVLGARI, The Story, The Dream is a homecoming of sorts. The epic exhibition, that will be open until November 3, 2019, spans two museums in Rome: the Castel Sant’Angelo and Palazzo Venezia. The storyline emphasizes how Italy itself has inspired Bvlgari and, in turn, how the jeweler spread the message of Italian design throughout the world. 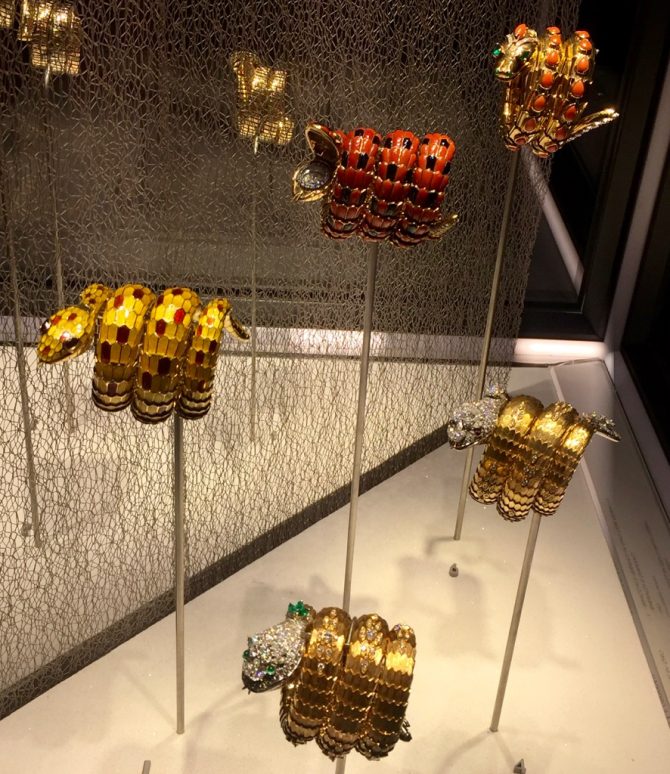 Serpenti watch bracelets made in the late 1960s on display in ‘BVLGARI, The Story, The Dream.’ Photo Marion Fasel

“This exhibition is a precious chance to reexamine, or better rediscover, the history of the company in a different light, like a visionary pathway that starts from Rome to then expand at the global level,” explained CEO of the Bulgari Group, Jean-Christophe Babin. “And I find that this is indeed the most interesting aspect of the whole Bvlgari saga, the strong bond with a city that is not only a marvelous scenario for any type of company, but also a muse of inspiration as well as being propitiatory for the fertile relations woven over the years with many protagonists of social, artistic, and cultural lift that have come to live or pass through the capital.”

The exhibition was worked on by a small army of experts from the Italian museum world including the lead curator Chiara Ottaviano who liaised with Bvlgari’s Heritage Department, led by Brand and Heritage Curator, Lucia Boscaini. There are over 800 jewels in Bvlgari, The Story, The Dream. The pieces span the company’s entire history, but emphasize the most glorious period from the 1950s to the 1990s when Bvlgari’s innovative designs were an international phenomenon. Pillars of the presentation show Bvlgari’s heroic sense of scale and daring blend of colorful precious and semiprecious stones. There are also its iconic collections of Serpenti watch-bracelets and Monete coin jewels. 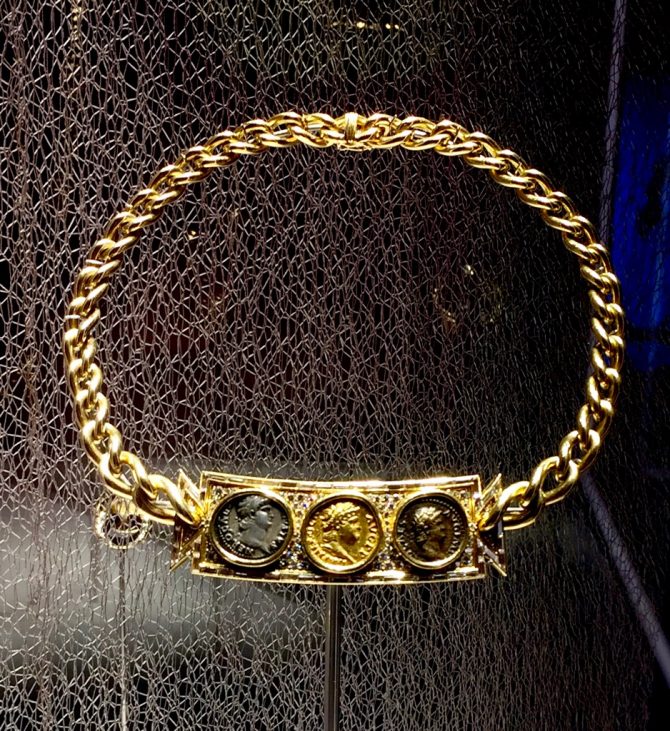 The sensational installation fills the grand spaces, which is no mean feat for jewelry that can be dwarfed in oversized locations. It achieves this goal with architectural vitrines and structures built within the exhibition rooms. Some of the structures are decorated with sophisticated light shows of Bvlgari jewels and videos outlining the history. Others show videos of Italian and American movie stars, mainly during the 1950s and 60s when Rome’s infamous paparazzi were on the scene capturing luminaries who were filming at the Cinecittà studios. Around 80 haute couture dresses from the private collection of Cecilia Matteucci Lavarini accenting Bvlgari, The Story, The Dream show Italian fashions in vogue during the period when the jewels were made. They help fill out the historical context and generally stand above the jewelry displays on the built out structures. 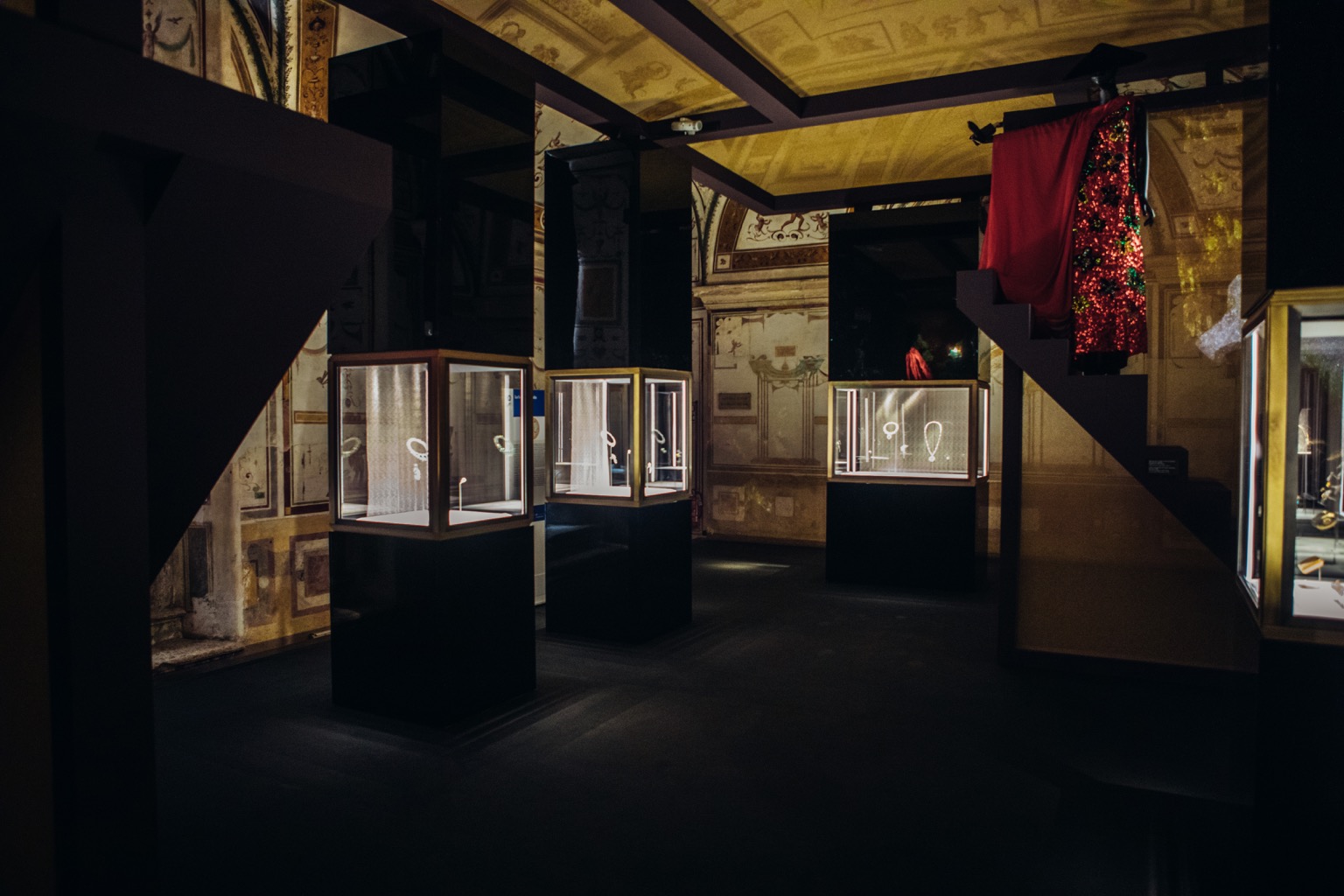 One of the galleries in the exhibit ‘BVLGARI, The Story, The Dream’ shows the jewelry vitrines and a gown on a mannequin on a set of stairs. Photo courtesy

One of the most amazing aspects of the exhibition is to see how the Bvlgari Heritage Collection has evolved with new acquisitions. Several of the Elizabeth Taylor jewels Bvlgari acquired in 2011 were on display. The newest sautoir star of the collection was also prominently featured. Made in 1969, the almost 34-inch long gemset necklace with a 127.35-carat carved cabochon in the center of the pendant was acquired by Bulgari in November. It had been famously photographed by Franco Rubartelli on his lover and muse Veruschka for American Vogue in 1970. Then it went into the private collection of an Italian woman. 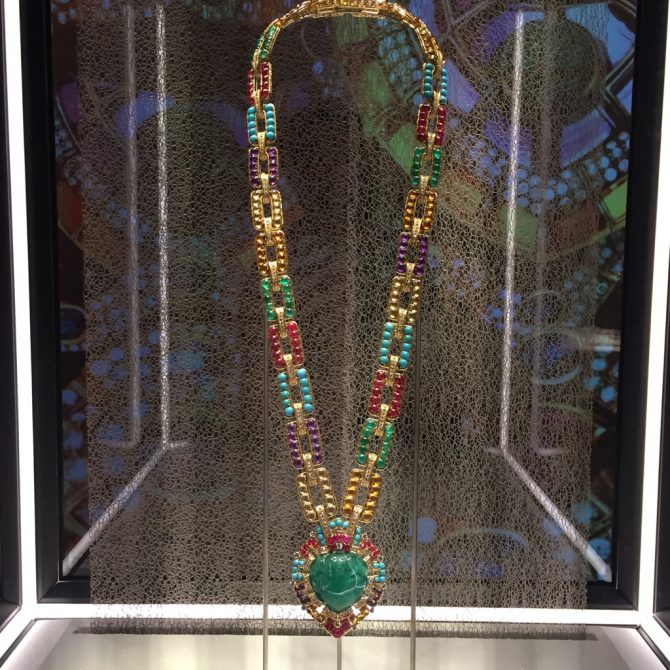 Sautoir made in 1969 set with a variety of gems and a 127.35-carat carved cabochon emerald in the center of the pendant. Photo Marion Fasel

The sautoir is the kind of piece that jewelry historians are overjoyed to see has survived the decades intact. It is the kind of jewel that truly belongs in a museum and is a thrill for the public to view up close. It is the kind of treasure that captures a moment in time when the gems could be sourced and the design gusto was in the studio to make it. There is no doubt the Bulgari brothers, who were once reluctant about looking at their own history, are proud it is on display as evidence of the firm’s innovative, revolutionary and modern ideas. It is also the kind of creation that proves the layered history of the great Italian jeweler is a subject that can be explored indefinitely. 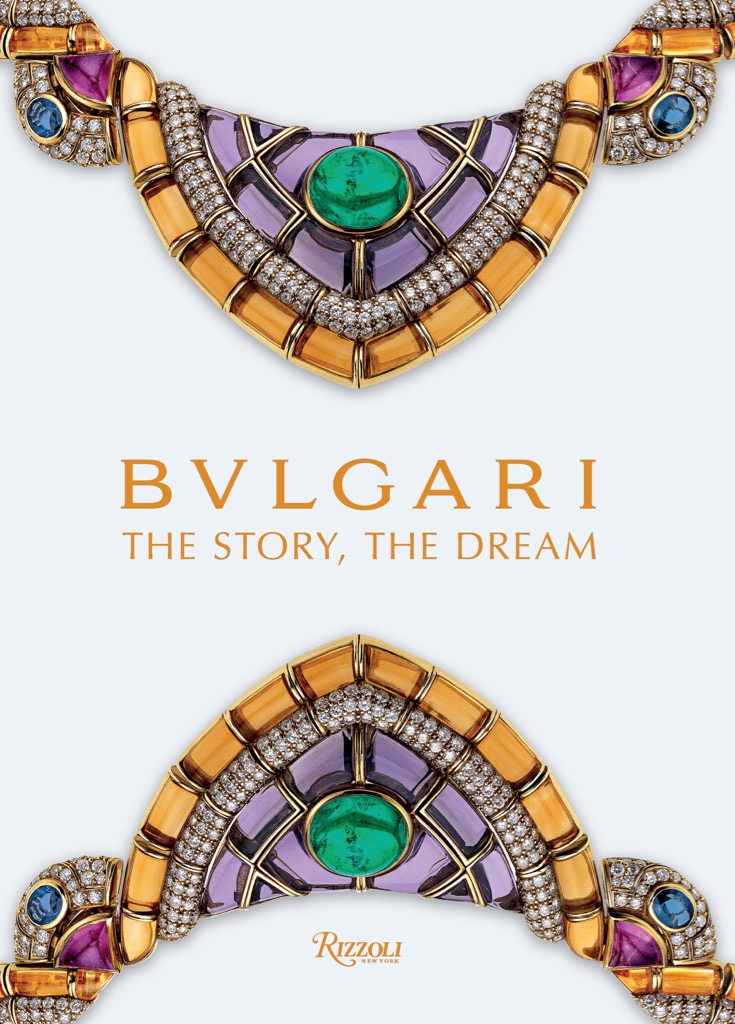 The cover of the exhibition catalogue BVLGARI, The Story, The Dream published by Rizzoli. Photo courtesy

Italians Made The Best Patriotic Jewels