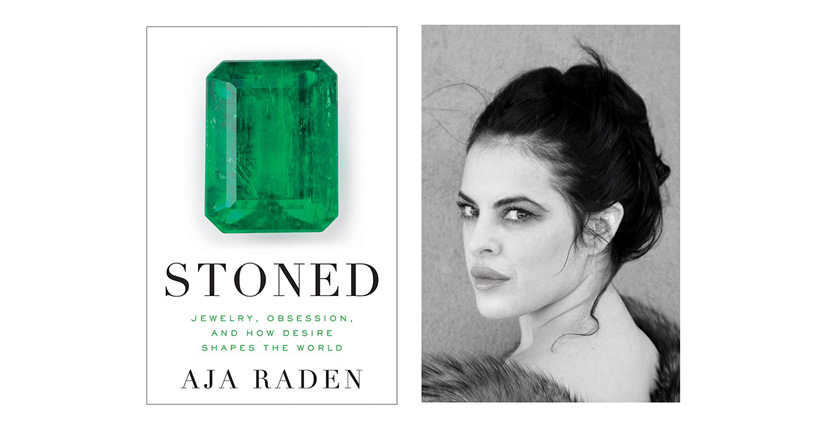 Interview with the Author of ‘Stoned’

Aja Raden explains why we are hardwired to love jewelry

All human history can be boiled down to these three verbs: want, take and have.  And what better illustration of this principle than the history of jewelry.
— Aja Raden

From the very first page of Stoned: Jewelry, Obsession, and How Desire Shapes the World I was hooked. Aja Raden’s unique voice is a seamless smash up of history, scientific facts, psychological analysis and, of course, jewelry. She is not only at ease with the vast array of material, her insights and observations are hysterical. The 35-year old first time author’s bio on the book jacket hints at her background. She studied ancient history and physics, worked at an auction house cataloguing jewelry and then was the senior designer at a big name jewelry brand. This hardly explains the full-on mental mix of David McCullough, Malcolm Gladwell and Jean-Baptiste Tavernier in the prose. I needed to know more about Raden and was thrilled when the native California girl who is as glamorous as a Kardashian agreed to meet me for drinks at Chateau Marmont and talk all things Stoned.

Who are you?  Please tell me about yourself.
What do you mean? I am myself.

Okay, well, you are an incredible historian but you also have a lot of science in the book. You are a jewelry designer and a writer.  These things don’t usually go together.  Could we break down your biography?
Well, I went to the Art Institute of Chicago for two years then I transferred to the University of Chicago to study physics and ancient history. I wanted to carry books and be on a quad and see what that was like. Plus, my older sister was there studying paleo osteology. Everybody in my family has done science so I did too.

It’s not an average transfer to go from art school to physics so clearly this is all part of your preternatural right and left brain. While you were in Chicago you gained some experience working with jewelry at the House of Kahn where you were head of the auction division. How did you get such a job while you were in college?
It’s a funny story. I started as an assistant then one-day shortly before an auction my boss quit. They needed someone to do the cataloging. I was, I don’t know moving chairs around or something, when I heard this and I said ‘I can do it.’ They interviewed me about cataloging questions for a couple of hours. I could answer everything on history and provenance. Eventually I quit school for a year for the job because well, it was taking a lot of time and I was already behind because I went to art school.

When you finally graduated and returned to California you went to work at Tacori.
I wanted to be a jewelry designer. I worked for Tacori for 7-years. I did old school designing for engagement rings. I used a pencil and a slide rule. For one of kind pieces I did the designs in gouache.

So you didn’t use CAD [Computer Aided Design]?
Oh fuck no, I can’t stand CAD.

When you turned the page on the next phase of your life you became a writer and delivered Stoned. I laughed when I read in the acknowledgements that you “didn’t really want to write a book” and that it “sounded like a lot of work.”  Yet you drilled down on topics and go far and wide from the jewelry touch points. How long did it take you to research and write?
They gave me a year so it took me a year. It all started when a friend of mine, Lauren Oliver who writes young adult fiction, had a birthday party in Paris. A girl sitting next to me at dinner had on a Tacori engagement ring I had designed. It ignited a conversation about jewelry history. They said you should write a book and I was like ‘it sounds like a lot of work.’ I had never written anything before except dirty text messages and status updates. I really didn’t want to do it, but Lauren stayed on me.

Things got rolling when I figured out a method which was dictating the stories in my head on to my phone. The concept came about when Lauren said write the stories like you would tell someone. I basically imagined a conversation where someone would ask me questions like say about Armand Hammer. Then I would think what does funding the Soviet Union have to do with Fabergé Eggs. I would talk into my phone. I did it in my car. I did it in the bathroom putting on makeup. Then I would email these things to myself and I would cut and paste into a word document and edit.

You cover such a massive amount of material. Did you have a research assistant?
No. I mean I don’t understand that. Half of it is intuitive. The facts just jump out at you.

You brilliantly formatted the book into Want, Take and Have. And chose 8-subjects to tell the story of ‘How Desire Shapes the World.’ How did you decide on the topics?
The diamond engagement ring the girl was wearing that I had designed started the whole conversation, so the history of engagement rings was a no brainer. The necklace that started the French revolution came up in that conversation. Then and I don’t remember why because the drinks were flowing, but we talked about the emerald parrot and the modern banking system. So those three were already there. Then I thought I have to include the Fabergé  eggs because I love them. Basically all eight stories in the book, were stories I knew. I looked at them and divided the into categories.

Were there any runner-up topics you were sorry to leave off?
There was one section in the final part that is about the upside of down, the good things that have come out of obscene, relentless, passion and desire. It was cut because the book would have been 450-pages. The story was about a Frenchman named Eugène Francois Vidocq who basically invented criminal science.

What happened was when Napoleon divorced Josephine suddenly an emerald parure he had given her was gone. Napoleon knew she had it. The perception she engineered was that he had stolen the emeralds and his political enemies would use this against him. God knows why people would think that but they were thinking that.

There were no police per se at the time, there were imperial guards, an army, but not a force for this type of crime. Napoleon did something unprecedented. He hired an infamous criminal to go find her jewels. Well actually, in all fairness it was the criminal’s idea. Vidocq said if you will pardon all of my petty and not so petty hilarious crimes—he was a huge character—he said I will find the emeralds for you. Everyone would have assumed he stole them but he was in the Bastille when he made this offer. He didn’t steal them but within two or three days he found the emeralds. Napoleon said ‘Oh my god, you are so fucking pardoned and anything you want—name it, it’s yours’. You know what this guy says? I want to be a policeman. He then invented Brigade de la Sureté. He basically instituted the foundations of what we think of as modern police work over the next twenty years. And it all started over the emerald jewels.

I love the way you used scientific reasoning throughout the book to explain a passion for jewelry.
The brain evolved to look for basically three things: light, sparkle and sheen. Long before we were mammals we were looking for water. It’s the only thing you can’t live very long without. Your brain doesn’t know that the sparkles coming off of water are any different than the sparkles coming off of a diamond. When you see sparkles or shine or glint, your brain lights up like a Christmas tree because sparkles equal life. It’s the reason people are so obsessed with jewelry. That was one bit of science I didn’t put in the book because I thought everybody knew it. Now after the fact I kind of wish I had.

You ended the book the “Past is only ever the prologue. But the future, as always, is wide open.” What’s next for you?
I am working on two books. One is named Rocked, it’s about minerals with subjects like conflict minerals from Afghanistan: wulfenite, cassiterite, coltan. These are the things that are in your cellphone. You have a conflict cellphone. Silver started the Opium wars. It’s about what fuels progress. The other book is called about Had. It is about the same line of questioning. Why do we value what we value? Why do we want what we want?

9 Gems You Have Probably Never Heard Of 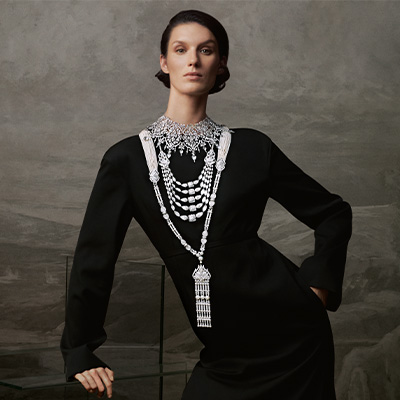