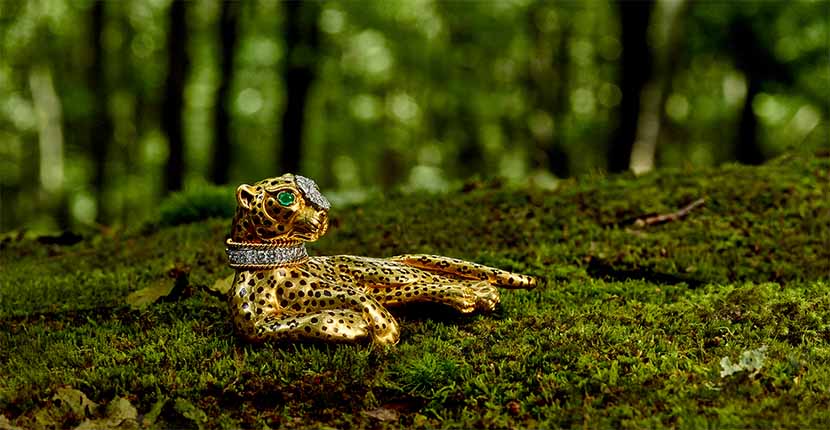 An emerald, diamond, gold and enamel leopard brooch featured in the exhibition A Walk in the Woods: David Webb's Artful Animals. Photo by Noah Kalina

September 18, 2022—Engaging and delightful, A Walk in the Woods: David Webb’s Artful Animals presents a slice of the American jewelry designer’s story in a way that at once goes deep and at the same time is easily digestible. The in-house exhibition curated by David Webb’s Head of Archives & Brand Heritage, Levi Higgs, explores the animal jewelry collection from several different angles.

A video presentation David Webb commissioned for the 1964 Coty Awards where he received the “Special Award for Jewelry Design” opens the exhibit. The short film of the animal jewels recorded in the woods involved some seriously talented creatives and shows just the type of circles David Webb ran in during the 1960s.

Photographer Milton Greene, who was famous for his 1950s sessions with Marilyn Monroe, worked with a cameraman to make the 16mm film. Illustrator Joe Eula, who would go on to become a fixture in Halston’s studio, drew pictures of the creatures which were interspersed in the film. Vogue editor, Babs Simpson who was always listed near the top of Diana Vreeland’s colorful staff memos was also on-set with David Webb during the August 1964 shoot.

The story of what happened next with the David Webb animals appears on the wall text in the exhibit and the 96-page Walk in the Woods exhibition catalogue by Levi and jewelry expert Dianne Batista. (The catalogue is not available for sale, but it is being given free of charge to all who attend the event.)

The publication covers the details of putting together the original video in 1964 and the Coty Awards held at the Metropolitan Museum of Art where Gloria Vanderbilt presented Webb with the accolade. It goes on to review delightful anecdotes about each of the animals. Zebras, frogs, leopards, giraffes, horses, snakes, monkeys and owls are the creatures featured in Webb’s animal kingdom.

Behind-the-scenes specifics are woven throughout A Walk in the Woods. Surprising tidbits include the Duchess of Windsor’s wrist size—6-1/8 inches—and the location where her frog bracelet was shipped.

Unexpected resource material from David Webb’s reference library is detailed. It wasn’t a safari or even a trip to the zoo that the designer used to create his giraffe bracelets. It’s believe the illustrated children’s publication The Big Book of Wild Animals (1954) was at his side.

Jewelry designs, some correspondence with luminaries, articles featuring the animals from the period and one divine picture of Gloria Vanderbilt taken by her husband Wyatt Cooper and on loan from her son Anderson Cooper are all part of the catalogue and exhibition.

A Walk in the Woods exhibit ends with a video by Noah Kalina that’s an homage to the original done for the Coty Awards in 1964. It was filmed in Lumberland, a town in Sullivan County, New York which isn’t far from where David Webb had a country house. A similar setup was staged outdoors and then it was elaborated on.

While the original production was silent, the new video has a score combining soothing music by cellist Patrick Belaga and sounds of nature. All of it brings the jewelry and memory of David Webb’s creative history beautifully to life.

A Walk in the Woods: David Webb’s Artful Animals will be on display at the New York boutique located at 942 Madison Avenue from September 19 to October 2. At the moment the event is sold out, but you can email events@davidwebb.com to join the waitlist.