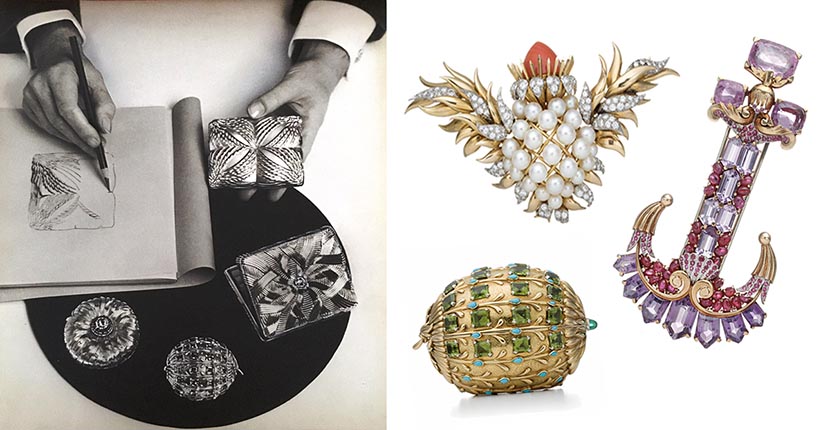 The Schlumberger Exhibit Goes Behind the Scenes

Drawn to Beauty: The Life and Atelier of Jean Schlumberger is the first exhibit to reveal the jewelry designer’s creative process through his drawings and show personal photographs of his jet-set life. Organized by the Museum of Fine Arts in St. Petersburg, Florida, the exhibit traces Schlumberger’s story from his early work in Paris where he created costume jewels for Elsa Schiaparelli to his glory days at Tiffany & Co. where he conceived treasures for the most glamorous women in the world including Jackie Kennedy, Diana Vreeland, Slim Hayward, Millicent Rogers, Daisy Fellowes and, of course, Bunny Mellon otherwise known as Rachel Lambert Mellon.

The exhibit that opened on December 15, 2018 and runs through March 31, 2019 is being shown alongside the Rachel Lambert Mellon Collection of Jean Schlumberger. Composed of over 135 jewels and objects, the collection made its public debut in an exhibit at the Virginia Museum of Fine Arts in 2017. The St. Petersburg presentation marks its second public appearance.

See highlights below of items featured in Drawn to Beauty: The Life and Atelier of Jean Schlumberger. Photo courtesy of the Lambert Foundation

“The Hands of an Artist” was the title of the New York Herald Tribune, September 26, 1958, story featuring this photo of Jean Schlumberger. The accompanying article announced that the designer, who joined Tiffany in 1956, was going to receive a special award at the Metropolitan Museum of Art from the American Fashion Critics Jury. He was the first jewelry designer to be given the prize. The story also stated that Schlumberger had added boxes to his collection the previous season. 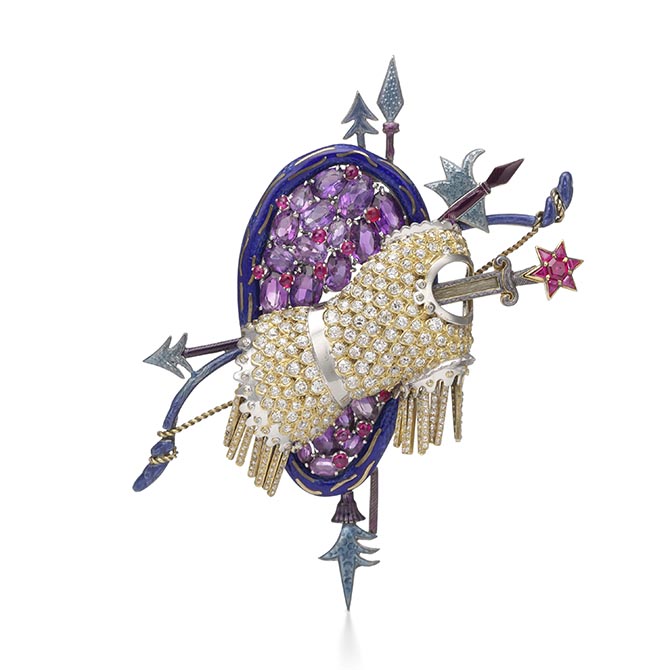 Legendary fashion editor Diana Vreeland reputedly kept her Trophée de Vaillance, designed by Schlumberger in 1941, on her night table. The diamond, enamel, amethyst, ruby, platinum and gold brooch, that has also been referred to as simply the Trophy or the Trophy of Love, has a fringed breastplate, shield and spears conjuring up a medieval code of dress and honor. “It’s not at all subtle,” Vreeland once said of the design. “A Schlumberger lights up a whole room!”

Diana Vreeland used her considerable influence to support Schlumberger in any number of ways over the years. Her most memorable act for the super talent was perhaps to write the introduction to his 1976 book Jean Schlumberger: Bijoux. In it she transformed the description of one of the designers most iconic creations, his Croisillon gold and enamel bracelets, to pure poetry. “He likes to stab enamel with nails of gold, as if to hold it from flying back to the world of nature from which he’s taken its color,” Vreeland wrote. “Like the direct eyes of a beast approaching you, the nails seem to say, ‘The world is tough—and wonderful.’” 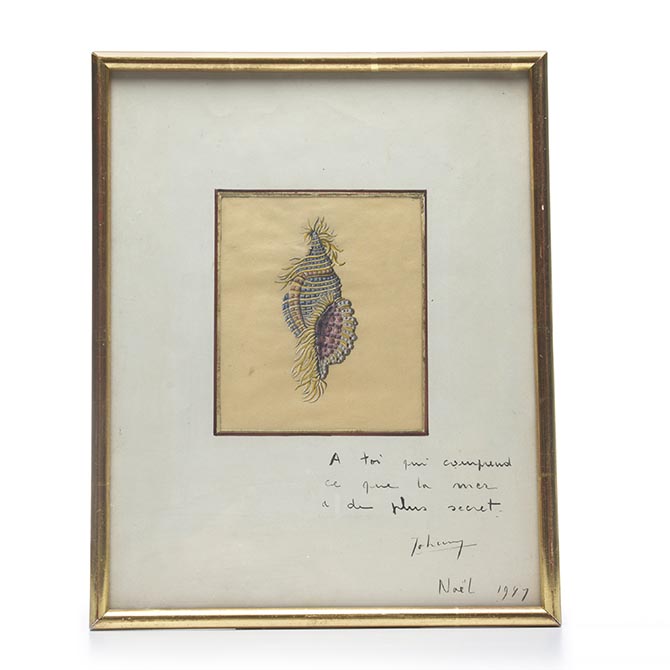 Jean Schlumberger’s drawing of a shell brooch made around 1947 is one of many of the designer’s renderings in the exhibit. The works on paper range from completed creations to pencil sketches that show Schlumberger testing variations of a theme. Note how the design above is signed “Johnny.” It was the nickname the designer’s nearest and dearest called him. The designer’s drafting table from his Paris apartment is also part of the exhibit as well as several pencils and a ruler. 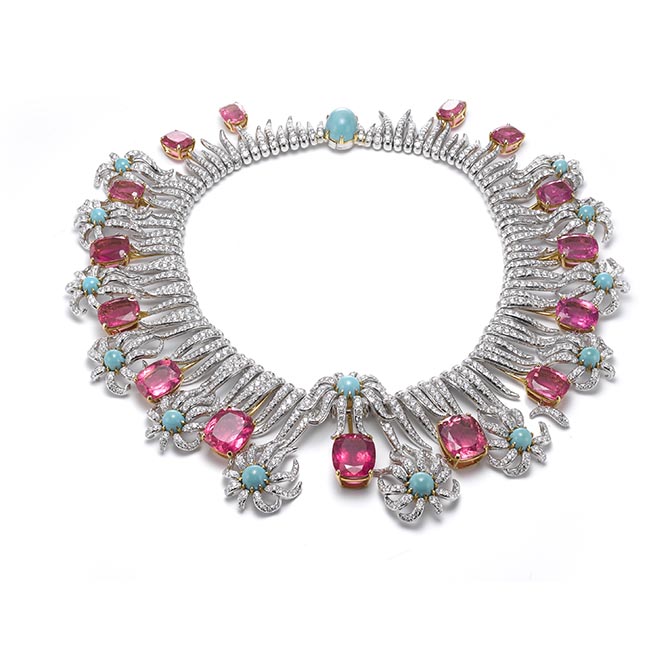 This Hedges and Rows necklace by Schlumberger for Tiffany & Co. comes from the collection of New York socialite and philanthropist Carroll Petrie. It is composed of diamonds, circular turquoise cabochons and cushion-cut rubellite tourmalines mounted in platinum and gold. Schlumberger created several renditions of Hedges and Rows necklaces. It is considered to be one of his greatest designs. 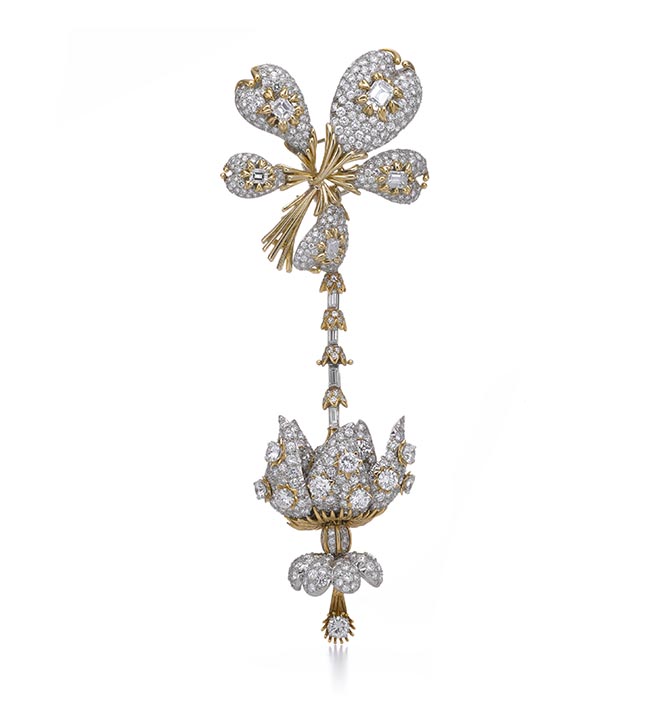 In a late 1950s article featuring this diamond, platinum and gold Five Leaves Brooch with Fuschia Pendant the journalist tired to pin down Schlumberger on his various sources of inspiration. “As for his library, it consists of illustrated works published in the 18th and 19th centuries on such subjects as natural history, medicinal plants, lace tropical leaves or tapestries. These books offer a riot of forms, designs, shapes and ornaments in loving detail. Schlumberger uses them as a starting point for his excursions into fantasy.” Style icon Slim Keith, who was married to director Howard Hawks, posed for Horst in 1949 wearing her Schlumberger cross brooch on the hip of a red bolero capelet by Trigere, over a black sheath dress with gold earrings and a bracelet and her glasses on her head. 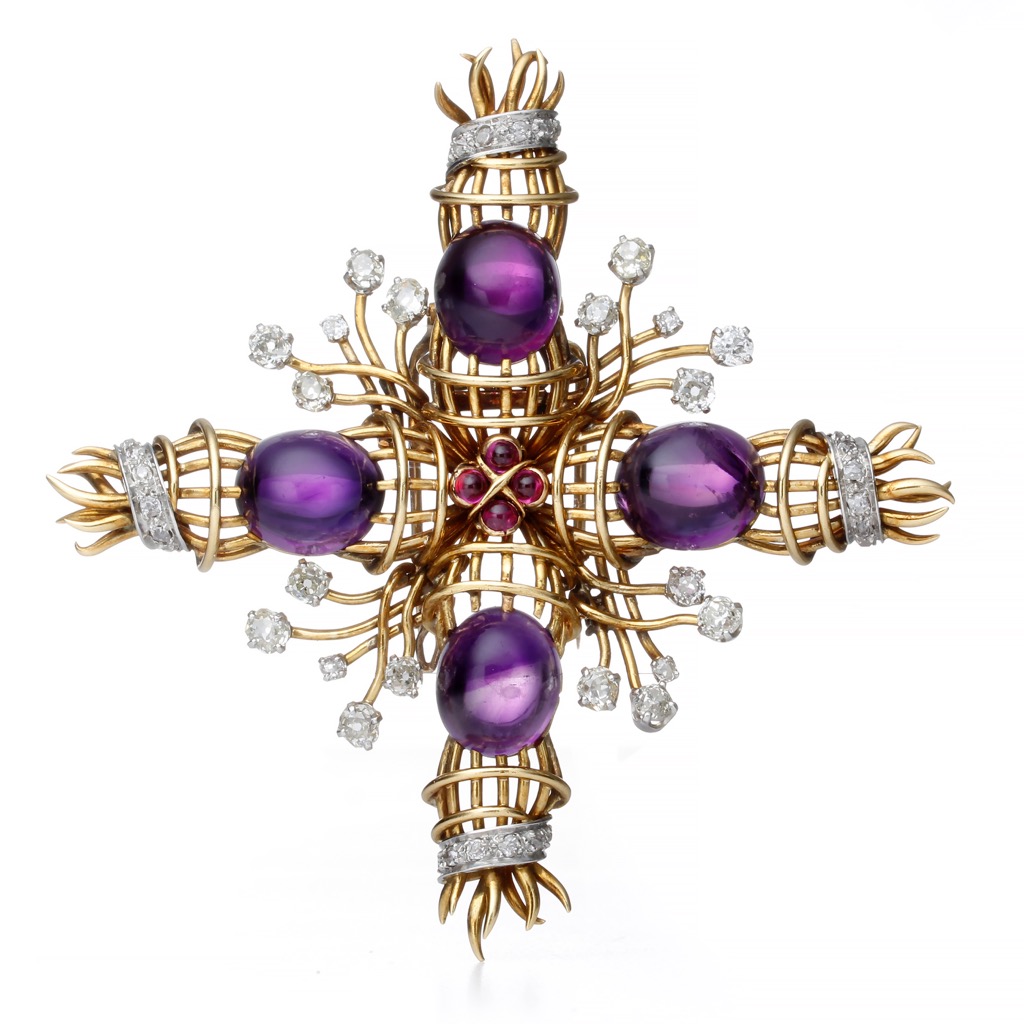 Slim Keith’s cross brooch is composed of amethysts, rubies, diamonds, gold and platinum. It was made around 1948. Life by the sea inspired many imaginative Jean Schlumberger jewels and objects. This gold, diamond and platinum evening bag with the initials “L R” on the top is literally modeled after a shrimp basket. It was made in 1973. 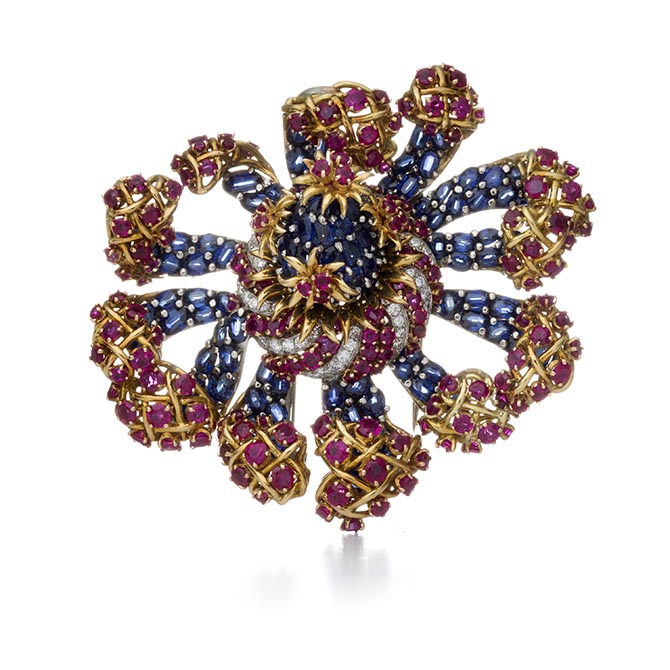 This Sea Anemone Clip Brooch was designed by Jean Schlumberger in 1952. The gold and platinum jewel is set with Burmese rubies, Ceylon sapphires and diamonds. 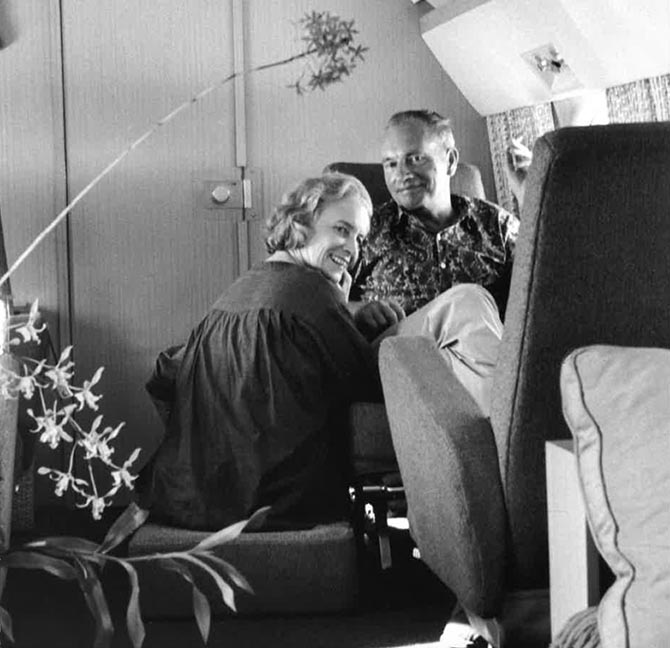 An orchid, Jean Schlumberger and Rachel “Bunny” Mellon on a private plane around 1960 in an image take by Luc Bouchage. Photo courtesy of a Private Collection

Drawn to Beauty includes a lot of photographs of the designer at work, play and home. There are a couple images showing how he traveled with his dear friend and patron Bunny Mellon. Photos of Jackie Kennedy and Jean Schlumberger dressed casually in Capri and formally at the Wildenstein Gallery for his 1961 show in New York are part of the exhibit. There is also an image of Jean Schlumberger with his partner Luc Bouchage at their Paris home at 15, Rue des Petit Champs in 1973 and a few images of Jean Schlumberger and Luc Bouchage’s home at 160 East 92nd Street in New York City. 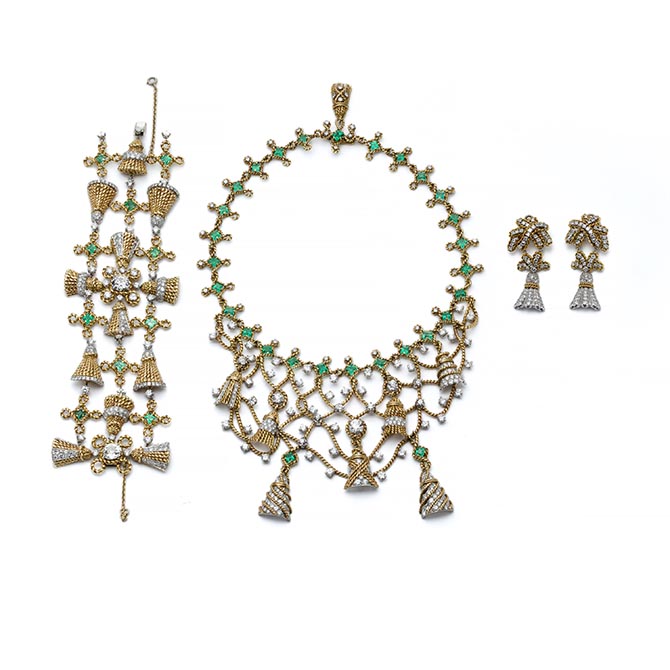 Jean Schlumberger emigrated to New York after serving in the French Army and de Gaulle’s Free French Forces during World War II. He opened a precious jewelry firm in a townhouse at 21 East Sixty-Third Street with a business partner, Nicolas Bongard who was the nephew of Jeanne Boivin and had experience working for his aunt. This Tassel Suite was made during the early years in New York, around 1948. It is composed of diamonds, emeralds, gold and platinum. 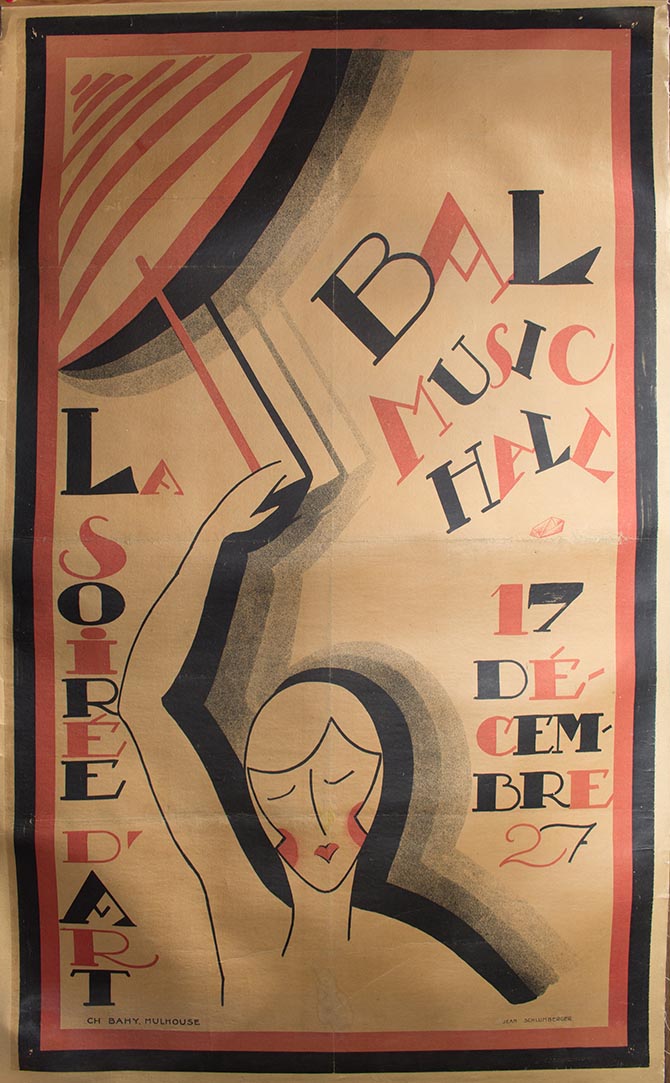 A self-taught designer, Schlumberger made a point of being honest with reporters, telling them upfront that he had no formal art training. “My mother had a saying, ‘If you have something it will come out someday,'” he said in a 1950s interview. “This may be true but it would have been easier with art training.” Born into a well-to-do French family of textile merchants, Schlumberger went through a series of jobs before he landed in jewelry. He designed textiles in the United States, posters for a book publisher in France and packaging for the famous French couterier Lelong. 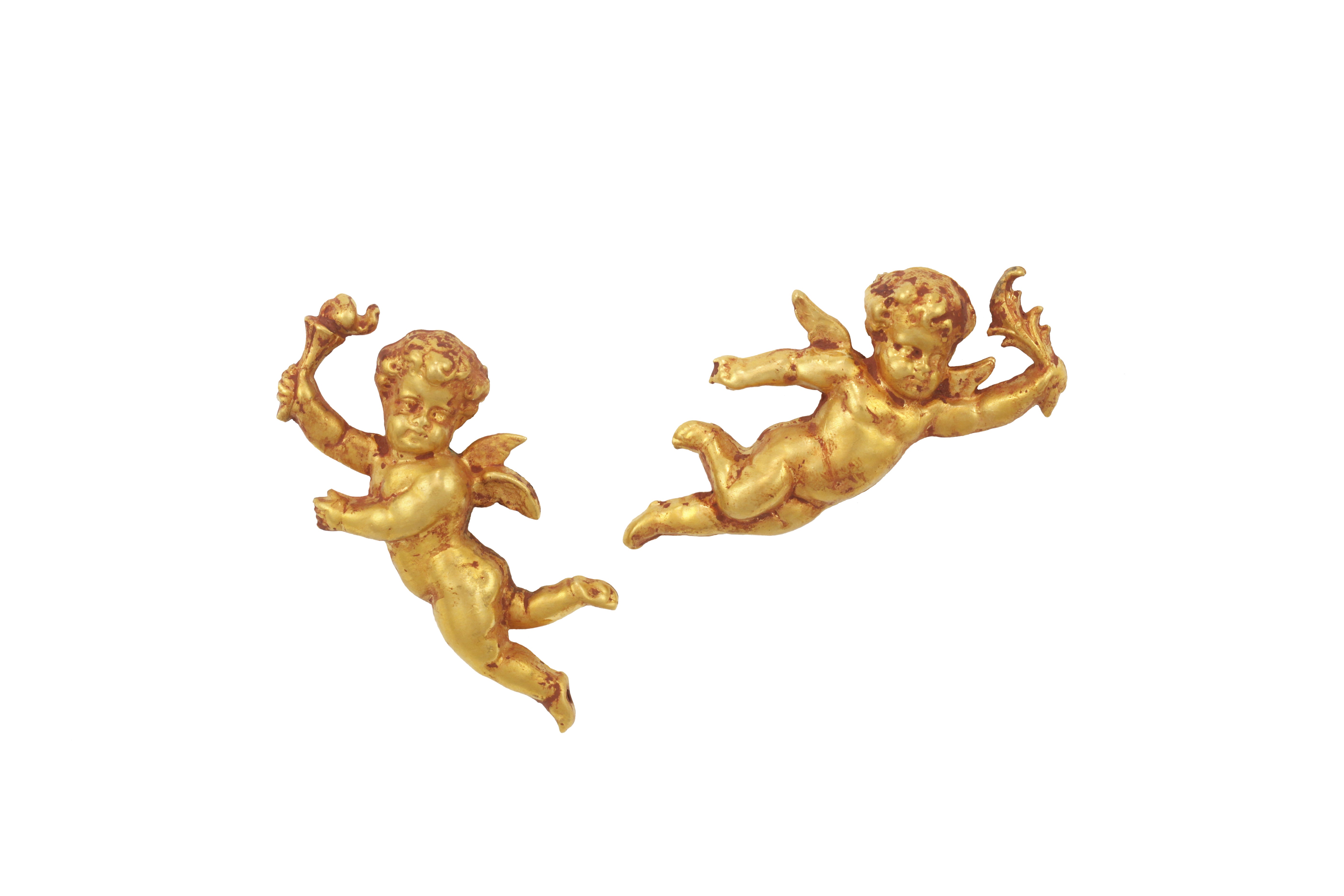 When Lelong fired Schlumberger on the grounds that he did not show any potential, legend has it that the depressed designer headed to the flea market for solace and found 120 porcelain Dresden flowers that he transformed into little brooches. The novelties caught the attention of the avant-garde fashion designer Elsa Schiaparelli who hired Schlumberger as a byline designer. The “Schlumberger for Schiaparelli” jewels featured in the exhibit include the Cherub Clips above as well as a Feather Necklace, Ostrich Clips, Harlequin Clips and the Royals and Republicans necklace featuring famous French historical figures.

At Auction: The Rockefeller Jewelry