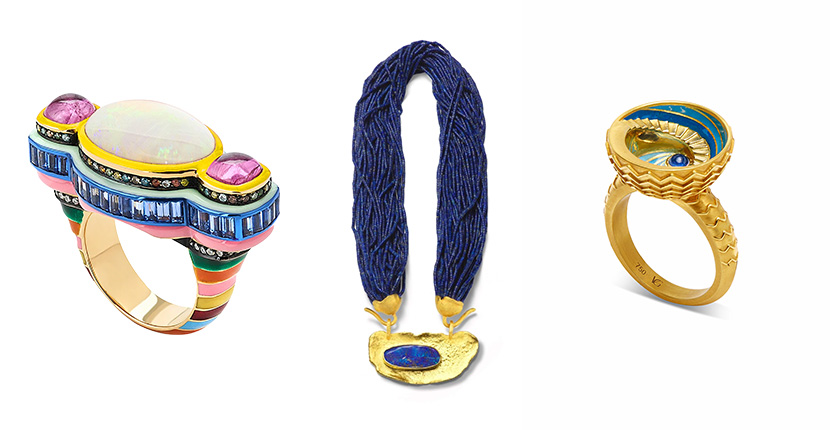 Is there a difference in how men and women design jewelry?

May 16, 2022—Do men write sex scenes differently than women? Almost every female author, and avid reader I know, believes they do. Generally, men describe mechanics not emotions. Women tend to delve deeper into the feelings connected to the act. There is in fact a Bad Sex in Fiction contest and 23 out of 26 past winners have been men (along with over 80% of the nominees since 2002).

And so it was that walking through the Women of Vision exhibit at the Mahnaz Gallery celebrating 70 years of iconoclastic female jewelry designers from 1950 to the present, I was struck time and again how few of the pieces could have been designed by a man.

It’s not that there aren’t men who are brilliant jewelry designers, of course there are. But there are significant and obvious differences in both the look, the feel and the inspiration of pieces designed by women for women. Sometimes it’s subtle but sometimes more overt as in the case of the Van Gelder jewelry Baoli’ Gold Ring in the exhibit.

In 18k gold, with 22k gold finish of alternating high and matte polish, the inside of the ring is decorated with spiraling enamel in shades of blue leading to a cabochon blue sapphire in round collet. Noelle Viguurs-van Gelder explained that the ring was inspired by the Stepwells of India.

Since 600 CE women have been visiting these wells to collect water for both drinking and use in ceremonies and rituals. Viguurs-van Gelder said; “descending down a Baoli is an almost spiritual sensation as sweltering heat turns to an enveloping cool, and the noise above ground becomes hushed.” To further explore the metaphor, in India, flowing water is considered a fertility symbol.

Tess Sholom’s opal necklace is a piece that suggests feminine secrets in both its amoebic design and color combination which seemed essentially graceful and feminine.

Vivianna Torun Bülow-Hübe, the first woman who designed for Georg Jensen to achieve international recognition, was quite aware of being a woman designing for women. She said she created jewelry to fit the contours of the female form, “it should enhance and move with the body to blend with you. . . it must be timeless.”

Solange Azagury-Partridge’s Hot Lips ring is yet another example of a woman’s vision, a powerful and audacious design that the women I spoke to all said they responded to viscerally.

Similarly, the surrealist Noma Copley used ordinary objects women employ in everyday life— a thread and a needle motif to decorate a gold cuff and scissors in a necklace. The Los Angeles Times once described Copley’s pieces as “beautifully wrought objects that reflect not only wit and sophistication but a highly individualistic spirit,” to which I would add, an inherently feminine spirit.

Elsa Peretti, is of course well known for her sensuous lines, but nowhere is that more obvious than in her elongated provocative tear drops. Just the fact that she used tear drops as inspiration is something that seems ultimately feminine. As Peretti once said, ” I was a baby when I began, but I knew exactly what I wanted to wear myself.”

And therein lies the essence of the exhibit—a woman designs knowing how the piece will feel to the touch, how it will feel on her, how it will enhance her lines, and what it will say about her.

“All these visionary women have had in common an innate understanding of the female body, the power of jewelry—intimate, talismanic, memorial, political—and of simply how beautiful the right jewel can make a woman feel,” said Mahnaz Ispahani Bartos, Founder of Mahnaz Collection.

It is what makes this show such an important one. The exhibit is open until May 19 and features 250 items by 25 jewelers: Solange Azagury-Partridge, Alice Cicolini, Melanie Eddy, Cora Sheibani, Tess Sholom, Van Gelder Jewellery, the sculptor, Sophia Vari and more.

How L’École Inspired My Novel

The New Edition of ‘Understanding Jewellery’