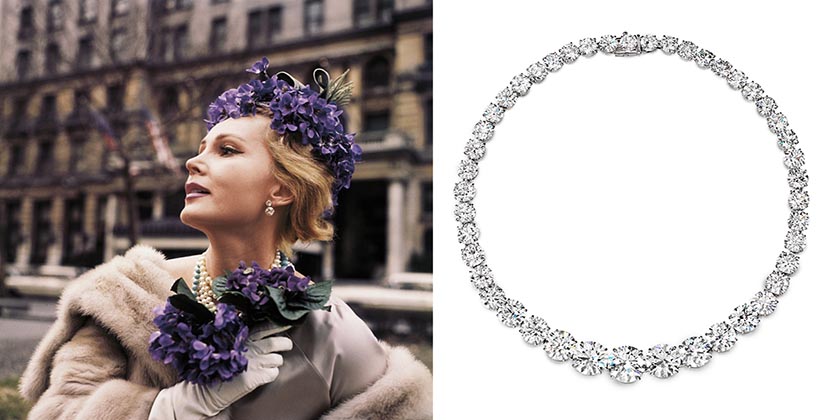 A 1959 portrait of Zsa Zsa Gabor in New York and the star’s Harry Winston diamond rivière going on the auction block at Bonhams. Photo by Shaw Family Archives/Getty Images and Bonhams

Bonhams is selling one of the star’s most amazing jewels

Zsa Zsa Gabor made movies and appeared on several different television programs during the heyday of her career, but really she was more of a personality than an actress. Her sharp wit and steady stream of bon mots made her a very popular guest on the talk-show circuit. The star once said, “What is really important for a woman, you know, even more than being beautiful or intelligent, is to be entertaining.” Married nine times her humor often revolved around her love life and spectacular jewelry. 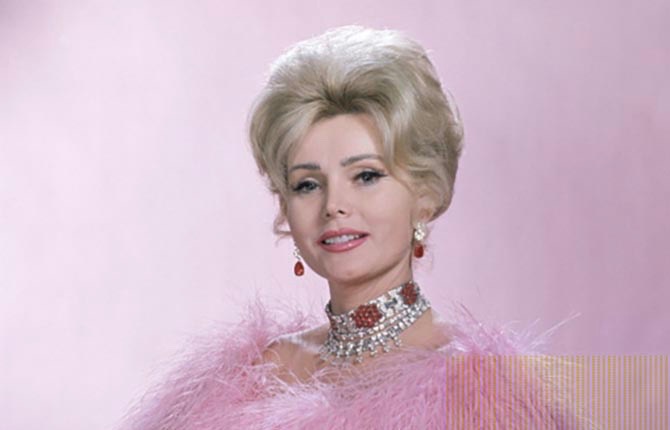 Zsa Zsa Gabor in a pink vulture feather coat and some of her jewels including a French ruby and diamond art deco wide bracelet styled as a necklace for a 1961 publicity image promoting her Dune’s Club appearance in Las Vegas. The jewel was featured in the 2017 Jazz Age exhibit at the Cooper Hewitt. Photo Getty

After Elizabeth Taylor, no one was funnier about jewelry than Zsa Zsa Gabor. Perhaps her most well know zinger is “I never hated a man enough to give him his diamonds back.” Another one of her quotes involving jewelry was “Diamonds are a girl’s best friend and dogs are a man’s best friend. Now you know which sex has more sense!” After one of her divorces when she was reputedly asked by a reporter if she should give her ring back to her ex, she saucily replied, “Of course dahlink, but first you take out all the diamonds.” 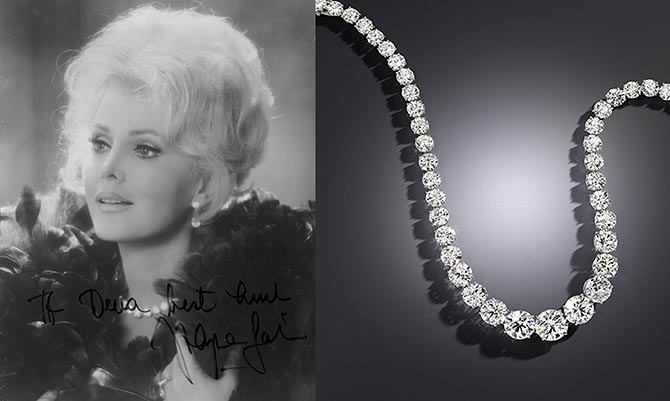 One of the star’s most incredible diamond jewels is going on the auction block at Bonhams in New York on December 4, 2017. A diamond rivière made by Harry Winston in 1964. The piece is set with 45 graduated round brilliant-cut diamonds weighing a total of 66-carats. Each of the gems in the necklace would make for an impressive engagement ring. The five largest diamonds in the center part of the rivière weigh 8.07, 6.34, 6.33, 5.35 and 4.88 carats.

Bonham’s estimate for the classic jewel is a cool $1,200,000 – $1,500,000. Now, that is a big figure and the fact is the provenance of the piece might push it even higher, but if you have got the money in the bank, I imagine Zsa Zsa herself might repeat another one of her more empowering lines and tell you, “There’s no better money to spend than your own.”

At Auction: Hundreds of Jewels Worn in Classic Films