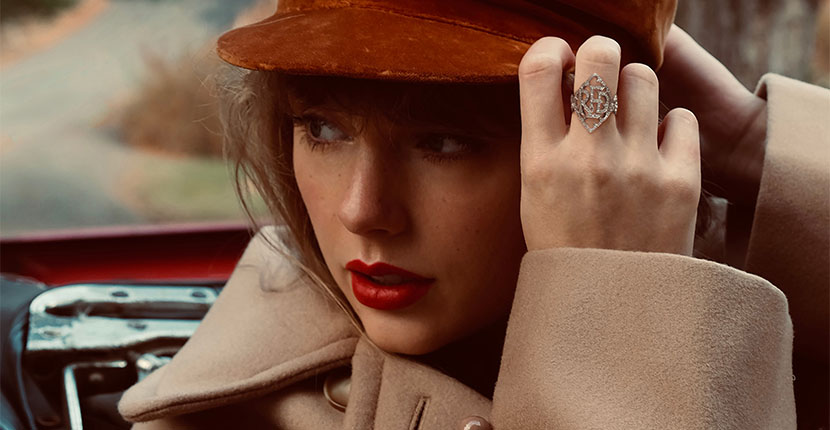 The jewel has a touching backstory

November 3, 2021—When Taylor Swift originally wrote and recorded her landmark Red album in 2012, she did it wearing a diamond and platinum “Love” ring by Cathy Waterman. The jewel was not a gift from a boyfriend or a self-purchase. It was a present from the designer and her daughter, Claire Winter Kislinger.

Over the years, Taylor had become very good friends with Claire and by extension her family. “Taylor would come over and make pies and play her guitar,” remembers Cathy. “She was really an honorary member of the family and the “Love” ring is one we give our family members.”

Flash forward almost ten years later, Taylor has re-recorded the album as Red (Taylor’s Version) (dropping November 12). It’s part of the empowered pop star’s move to, in essence, take back the catalog of her first six albums and master recordings sold to a third party by Scooter Braun. Revisiting her old works has inspired a fount of fresh new ideas. Taylor has added around 11 tracks to the album.

The new recording also clearly reminded Taylor how much the “Love” ring was part of her original process. For Red (Taylor’s Version) she thought a Cathy Waterman “Red” platinum and diamond ring would be apropos. “Taylor texted me one day,” explains Claire. “She said, ‘call me, I have an idea.’”

Cathy was delighted to design a “Red” ring for Taylor. She used the same silhouette of the “Love” ring and transitioned the word to “Red” in her fairy tale script with branches and thorns. “The style is meant to reflect the wonder of life as well as the prickly parts,” says Cathy. “It’s a bit of a metaphor for the challenges and the joys.”

Taylor’s “Red” ring was only the third rendition of the design Cathy has ever done in the last 20 years since she launched the first “Love.” Cathy has made a version that said “Pax” for peace. She uses words very sparingly in her collection. Others she has worked into designs include “Mom” and “Abracadabra.”

Taylor wears her Cathy Waterman “Red” ring on the album cover for Red (Taylor’s Version) in a fetching photo by Beth Garranbrant (in the image at top).

An excellent costume rendition of Cathy’s ring is part of the merchandise for the album and can be purchased on Taylor’s website for $45. Head there for the details on the design and to order immediately for yourself or the Swifties in your life.

‘Marie Antoinette’ 15th Anniversary: A Look Back at the Sparkle

All the Details of the Ducal Ring in ‘Dune’