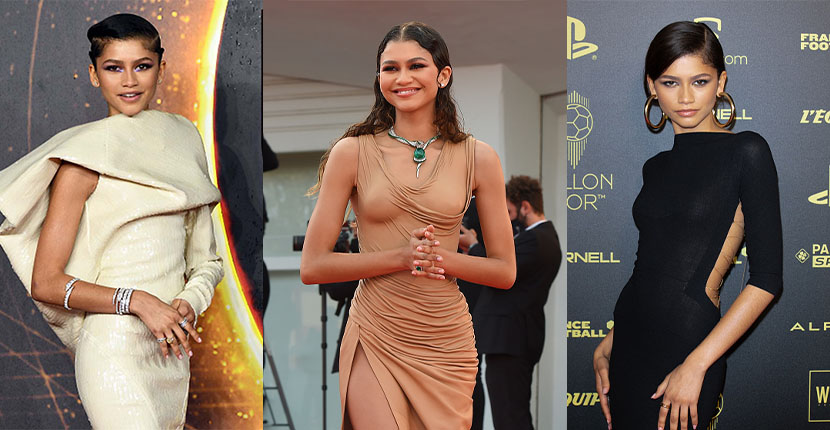 Zendaya wearing Bulgari jewels at the Dune premieres in London and Venice and Jennifer Fisher hoops at the he Ballon d'Or awards in Paris. Photo Getty

We have never seen an actress wear jewelry quite like this

December 7, 2021—From the moment Zendaya stepped on the Oscar red carpet in April there was a different air about her. She had that “it” quality of a movie star. There was something in her eyes and a new confidence. Perhaps part of it came from her Emmy win for her role in the dramatic series Euphoria late last year. A prize she was the youngest ever to receive. Perhaps it was the lineup of films she knew she had coming out this year that would make it her year.

Despite the fact that she is just 25-years old, Zendaya has been working for well over a decade. She began as a child model and backup dancer. So, she was ready for all that was about to happen: multiple film premieres, awards shows and countless other events.

Through it all, working closely with her stylist supreme Law Roach, Zendaya has shown how to have fun with High Jewelry, throw costume pieces in the mix, not to mention the dazzling yellow and white diamond Bulgari ring she bought for herself and wears all the time. In other words, she had as much versatility in her jewelry style as her acting.

Find out about all the jewels Zendaya wore that made her our Jewelry Star of the Year below in reverse chronological order.

There are better pictures of Zendaya at the Spider Man: No Way Home photocall in London that show off her Alexander McQueen costume spider web earrings more clearly, but I like this one for a couple of reasons. It shows how Zendaya really lights up around her boyfriend, Spider Man himself, Tom Holland.

And you can see her yellow and white diamond Bulgari right hand ring. The actress told British Vogue during an interview, after the journalist spotted it, that she bought it herself. Zendaya who is an ambassador for the Italian jeweler delightfully added, “I do get a little employee discount.”

Almost every actress in Hollywood has worn Jennifer Fisher hoops at one point or another. It’s pretty routine to see them looking great on stars, but when I saw Zendaya in the designer’s 2.5-inch Mamma Jamma style they stopped me mid-Instagram scroll.

It’s the supersize of the hoops combined with the sleek hair and the cutout Roberto Cavalli gown. Suddenly and immediately, I wanted these Jennifer Fisher hoops.

One of the accolades Zendaya took home this year was the CFDA Fashion Icon Award. She was the youngest recipient of the prize. To accept it she sparkled in diamond jewelry by Bulgari and a custom red Vera Wang bandeau top and bubble peplum skirt.

The detail image shows off Zendaya’s bracelet and band rings as well as her own yellow diamond ring from Bulgari. Zendaya wears it on various fingers and almost always has it on.

For the London premiere of the sci-fi epic Dune, Zendaya paired an out-of-this-world Rick Owens gown with diamond jewels from Bulgari including her yellow diamond ring.

Of course, this is a Vivienne Westwood top not a jewel at all. It feels, however, like a tribute to jewelry. It’s also a mini-trend in fashion to make tops out of jewelry parts. Elle Fanning wore the Balmain curb chain link top at the InStyle awards.

Actresses who are fashion and jewelry iconoclasts don’t play it safe with their style. I often feel like this reflects the work they do on screen. For the Women in Film Honors: Trailblazers of The New Normal, Zendaya wore a dress and costume earrings straight off the Loewe runway in Paris. At first, I wasn’t sure if I liked the look. Now I sort of love it.

This may not seem like a jewelry look and it’s not really, but the Azzedine Alaïa dress was another Zendaya break the internet moment so I thought I would toss it in for you to see the jewelry.

Part of Law and Zendaya’s talent is not just the dresses they choose but how they complete clothes with jewelry and beauty details. In this case the big hair plays against the small top. Zendaya is also wearing great hoops. And she has on her Bulgari diamond ring.

Zendaya made a jewelry moment for the history books at the Venice Film Festival. It was an epic red-carpet star turn when she stepped off the boat in the Grand Canal to the red carpet for the Dune screening in a “wet look” custom made Balmain leather gown and Bulgari’s Hypnotic Emerald Serpenti necklace centering on a 93.83-carat cabochon Colombian emerald.

The Bulgari jewel has over 26-carats of buff top emeralds and more than 50 carats of diamonds. It took over 1,800 hours to make.

At the Oscars, Zendaya breezily tossed on $6-million in Bulgari jewels and set the tone for how easily she would wear important jewels not to mention playful pieces throughout 2021. It’s been a joy to watch.

What Is Angelina Jolie Wearing on Her Chin? 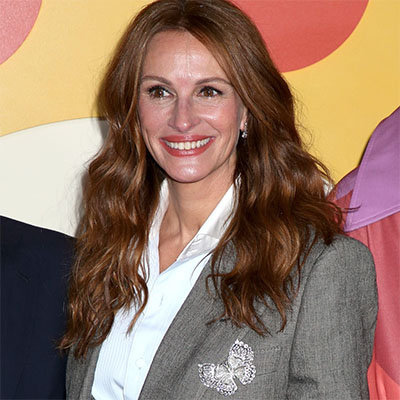 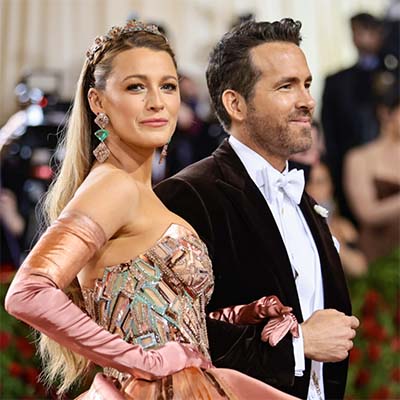