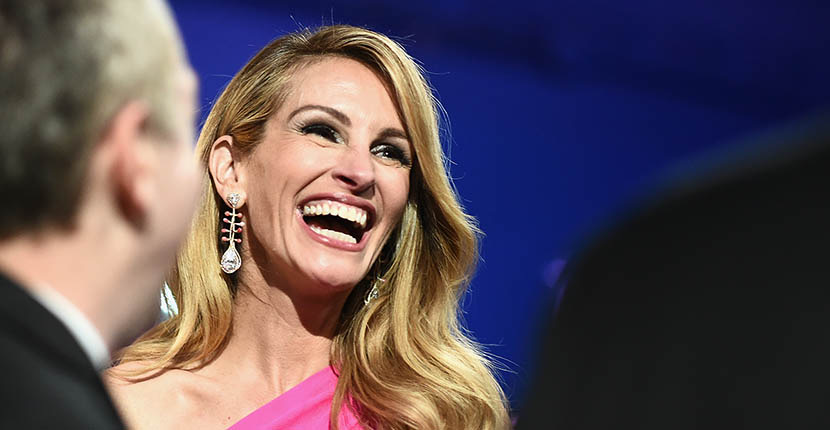 Jewelry Surprises at the 2019 Oscars

There were any number of unexpected moments

It was an Oscars for the record books. After weeks of concern that the show had no host, the lack of one actually seemed to energize the proceedings. In the jewelry arena there were lots of jolts of excitement too, above and beyond the glorious jewelry on the red carpet and Lady Gaga in the 128-carat Tiffany diamond. See all the surprising jewelry moments below. 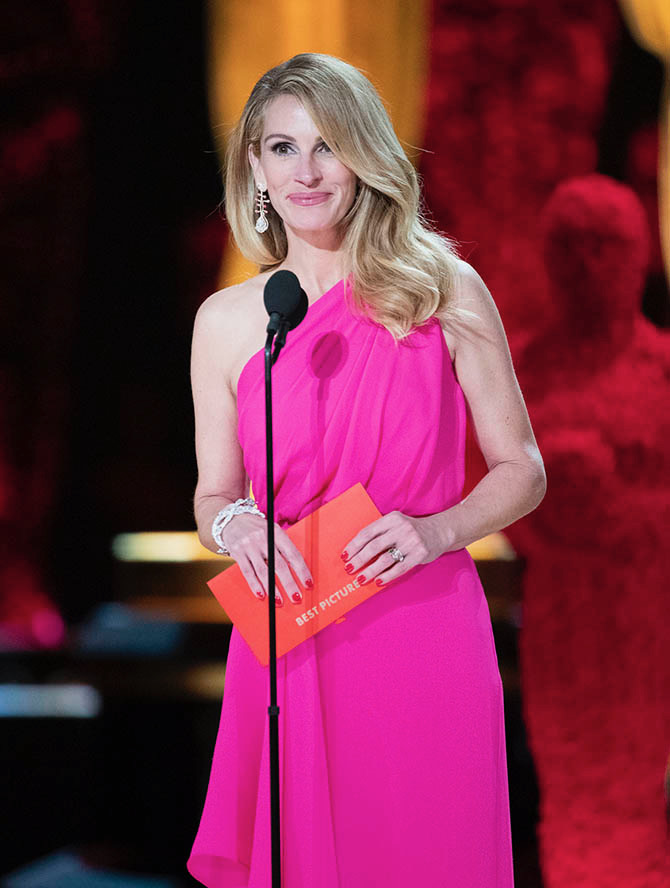 Julia Roberts did not walk the red carpet. She walked on the stage like a boss to present the final award of the night, Best Picture. As if confirmation was needed, Julia Roberts proved pink was the hottest color at the Oscars. The Pretty Woman looked sensational as she presented in a custom Elie Saab dress and High Jewelry by Cindy Chao. 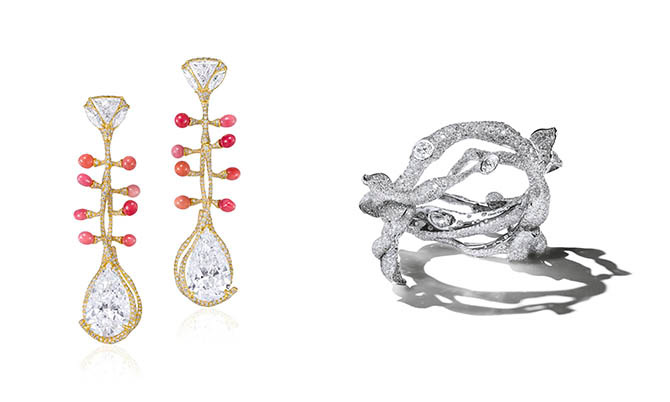 Julia wore Cindy Chao’s The Art of the Jewel Architectural Earrings set with 2 pear-shaped diamonds weighing a total of 20.28 carats, 16 Conch pearls and diamonds. She also had on the Branch Bangle from Cindy Chao’s Four Seasons collection set with around 58-carats of diamonds. 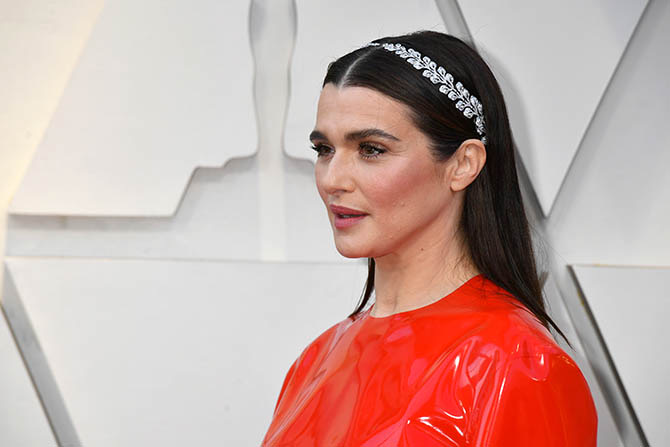 The diamond and platinum hair ornaments worn by Rachel Weisz were made by Cartier in Paris in 1903. They are part of the French jewelers Archive Collection. I have seen the jewels on exhibit several times and always wondered what they would look like worn. It was such a surprise for me to see them regally and coolly worked into Rachel’s hair. 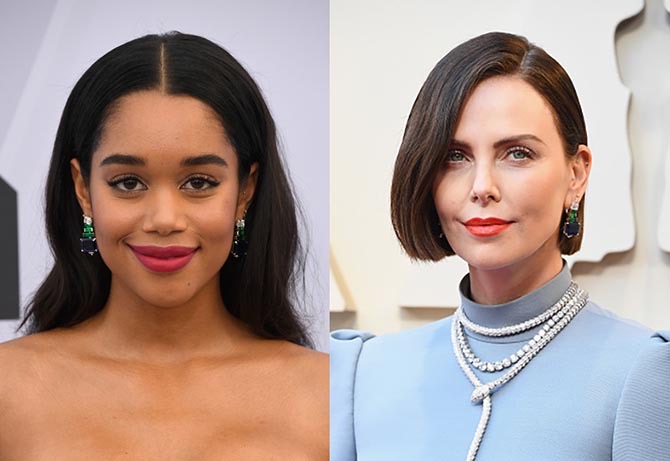 There once was a time when stars demanded exclusive jewels on the red carpet. You know what, some still do.  Others realize the treasures are treasures and are perfectly happy to wear something that has already had an outing or two. They just wear it in their own unique way.

Charlize Theron tossed on a Bulgari Serpenti necklace, a style that has become one of the greatest red-carpet favorites of all time, with her baby blue Dior Haute Couture. She also wore earrings from the Italian jeweler that had been worn by Laura Harrier at the SAG Awards. The jewels with 2 octagonal step sapphires weighing 25.58-carats, 6 baguette emeralds, 2 emerald cut diamonds and 2 oval brilliant cut diamonds. 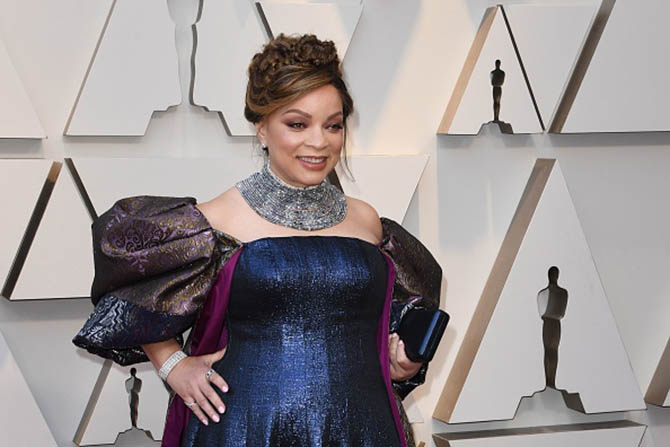 The stars of Black Panther have been unforgettable on the red carpet all season. Well, at the Oscars two women from behind-the-scenes, who won awards for Costume and Production design, proved that style runs deep in that film crew.

Costume designer, Ruth E. Carter had on an incredible necklace of gems in an ombre pattern that matched her regal gown as well as a diamond bracelet studs and rings. 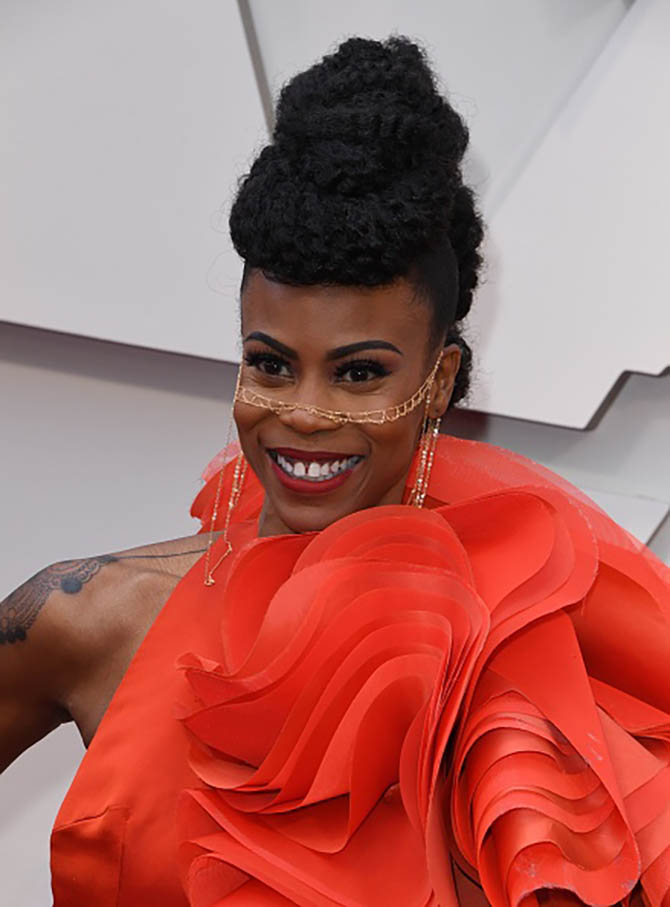 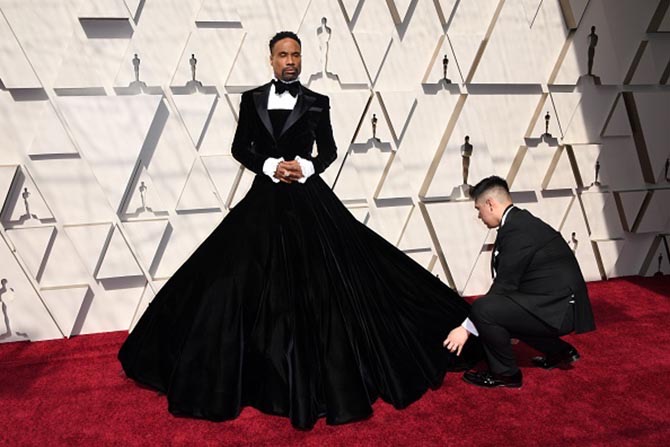 All season, men have been as interesting to watch for jewelry as the women and the Oscars was no exception.

Billy Porter left everyone in awe with his tuxedo dress by Christian Siriano. He paired the incredible gown with a huge gem-set ring from Oscar Heyman. At the Vanity Fair party, he took off the white shirt and tie and wore a diamond necklace in its place. 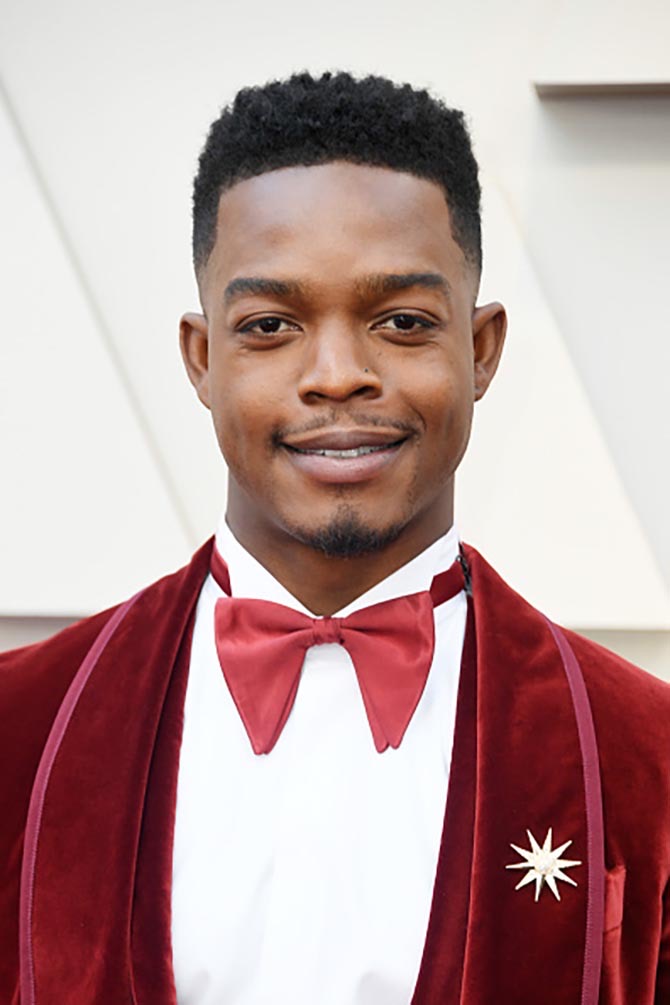 Stephan James wore a starburst brooch with his velvet tuxedo. 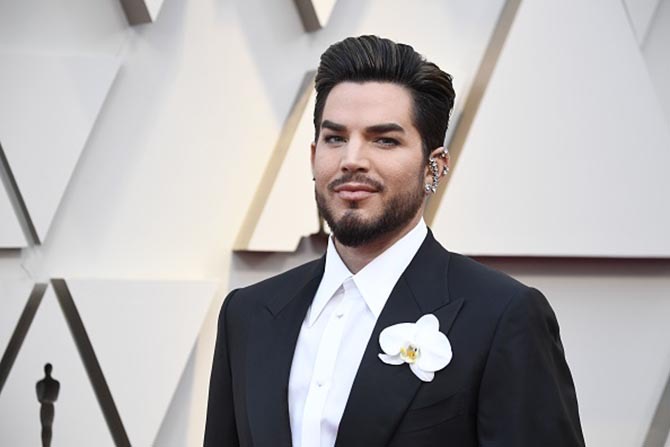 Adam Lambert wore one of the most elaborate ear decorations we have ever seen. 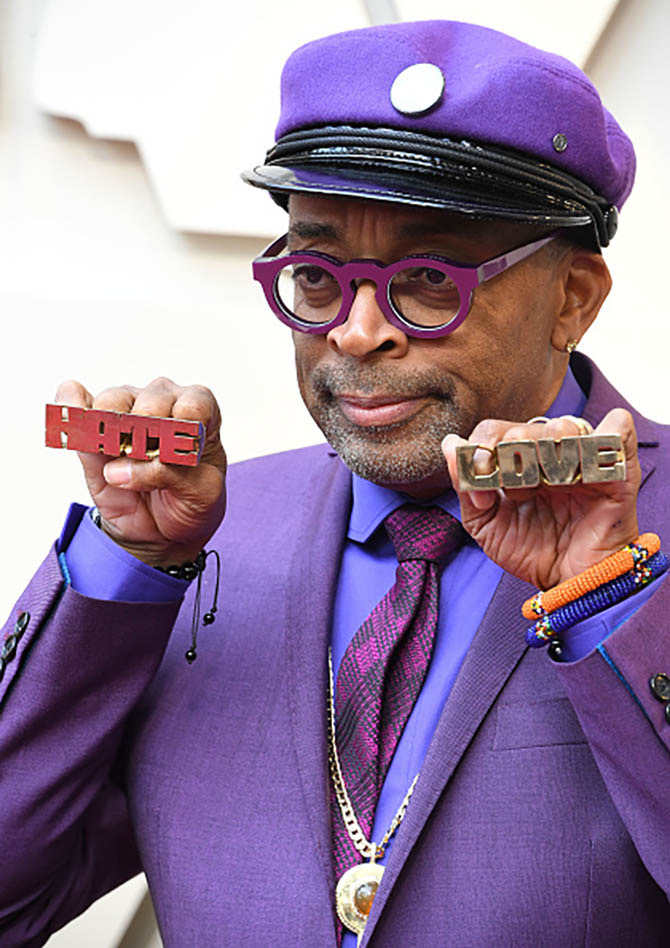 Spike Lee sported the Love and Hate rings he has worn all season promoting BlacKkKlansman on the Oscars red carpet. After he won the prize for Best Adapted Screenplay he removed the Hate ring at the Vanity Fair party. 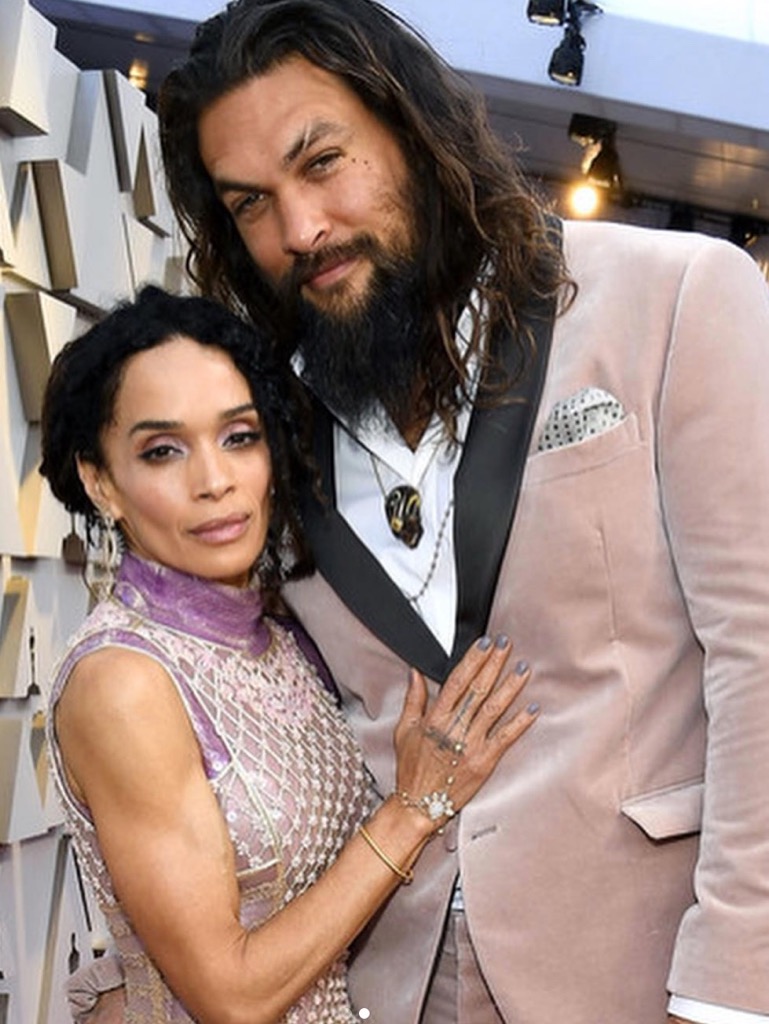 The great women and men’s bejeweling came together with certain couples. Jason Momoa and Lisa Bonet both are always layered in lots of jewels. Her selection included earrings from Fernando Jorge and a Jacquie Aiche hand piece with an opal motif. 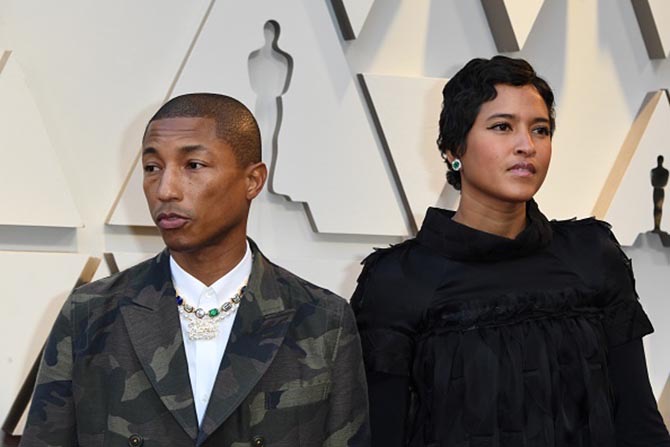 Pharrell Williams and Helen Lasichanh always carry out their styles in sync. At the Oscars their jewels also subtly echoed each with the hint of emeralds in her earrings bouncing off the green in his necklace. Pharrell’s diamond necklace was a custom design from Jacob & Co.

Lady Gaga Wears the 128-Carat Tiffany Diamond at the Oscars

The Best Jewelry at the 2019 Oscars