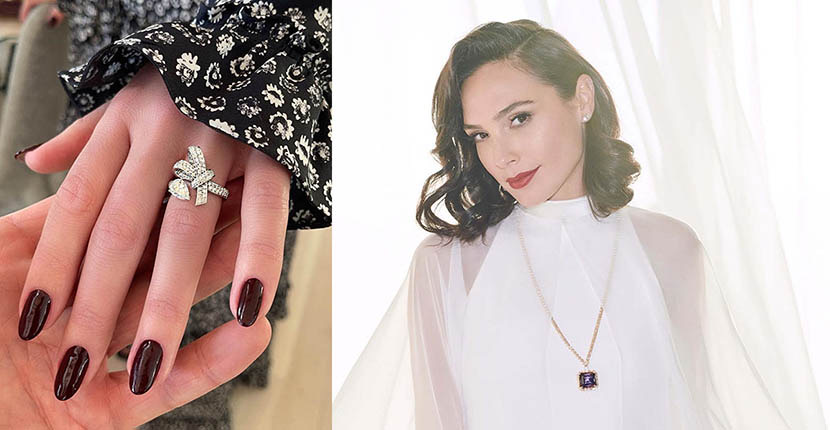 Without a major red carpet at the Golden Globes, finding photos of the jewels stars wore became a treasure hunt. I had to monitor social media and photo archives through the night and into this morning for the best images. It took a minute, but was definitely worth the extra time.

I found all kinds of sensational details in my search. Some stylists and jewelers posted the pieces worn. A few stars did full on photo shoots of their looks. There were also some charming at home scenes, not to mention a few general credits we overlooked in our initial coverage last night.

Catch up on all of it below. 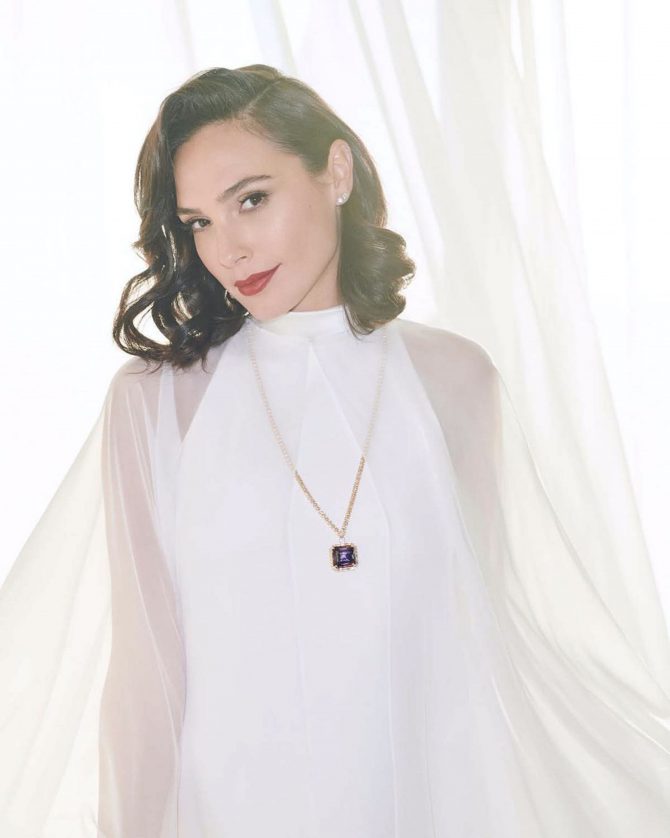 Gal Gadot was among the stars who shared several professional photos of their Globes ensemble. Her white gown provided an ethereal back drop to her colorful Tiffany jewels.

This tradition of having a posed picture taken for an awards show can be traced back to another time. In 1961 when Elizabeth Taylor won the Oscar for her role in Butterfield 8 she had lensman Mark Shaw take her picture in the ensemble she wore to the event. I suspect she did so because she wanted to mark the occasion and the red carpet left something to be desired in those days in terms of photography coverage. 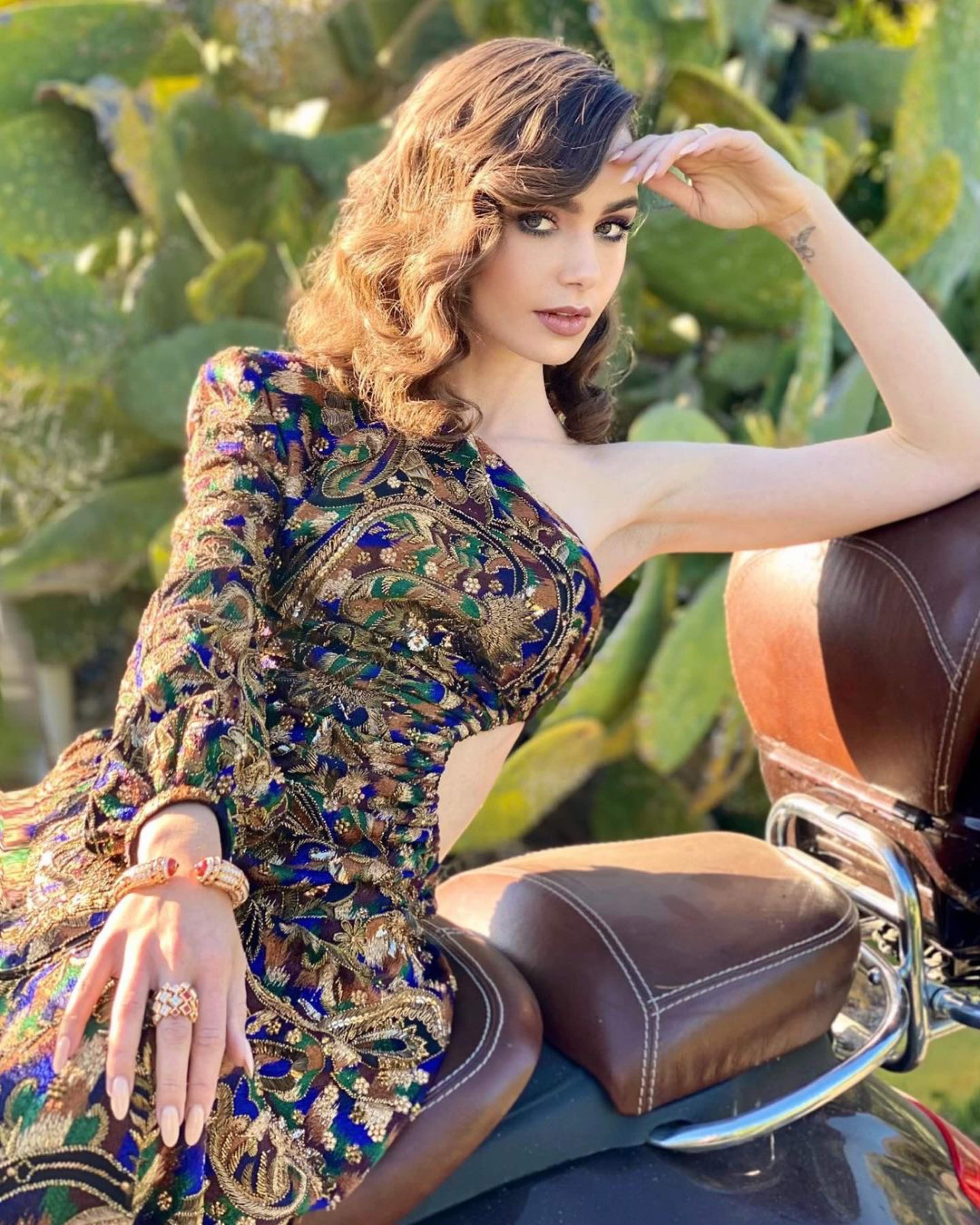 Pictures of Emily in Paris star Lily Collins consistently rolled in throughout the evening. The colorful closeup seated on the back of a Vespa gave a nice look at the star’s Cartier jewels. 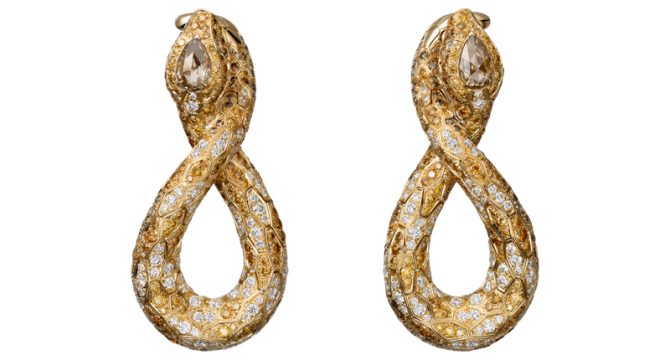 Cartier shared a detail image of the snake earrings Lily wore that could be seen in other shots of the star posing in an orange grove. 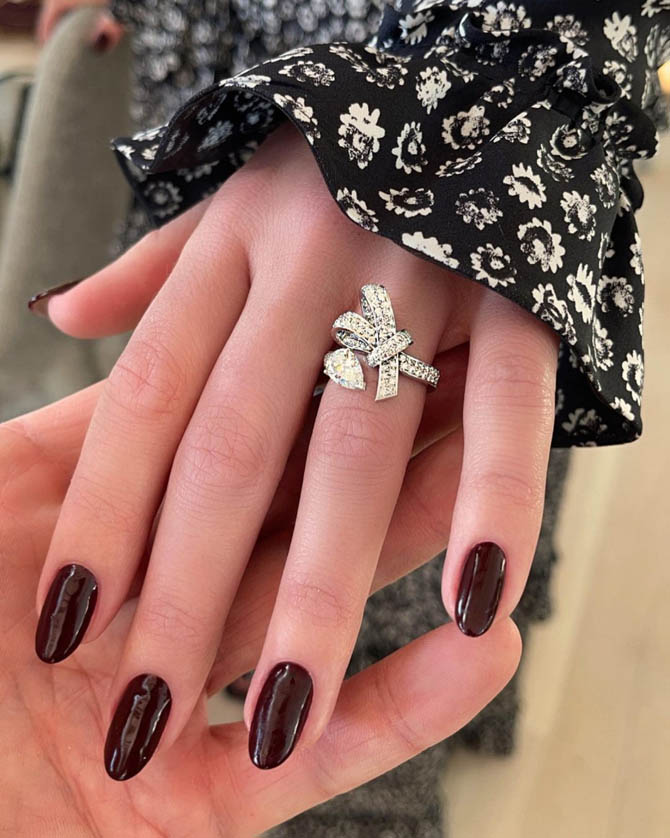 Margot Robbie wore all Chanel everything to the Globes. It was easy to see from the logo on her dress and bag. Her earrings are also a signature Chanel comet style. What could not be seen at a distance was the divine diamond Chanel ribbon ring the star was wearing. Her manicurist Tom Bachik showed it in his Instagram shot of her hands. If you hadn’t guessed, the star’s nail polish is also by Chanel. The color is Interdit. 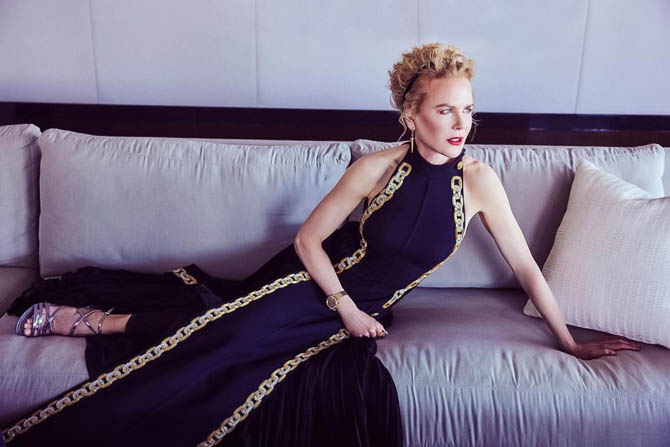 Nicole Kidman stretched out on a sofa for just one shot showing her full look. We would have loved more, but alas we will take it. The Undoing star paired Cathy Waterman gold sword earrings and Omega Moonshine Gold Trésor watch with a Louis Vuitton gown. 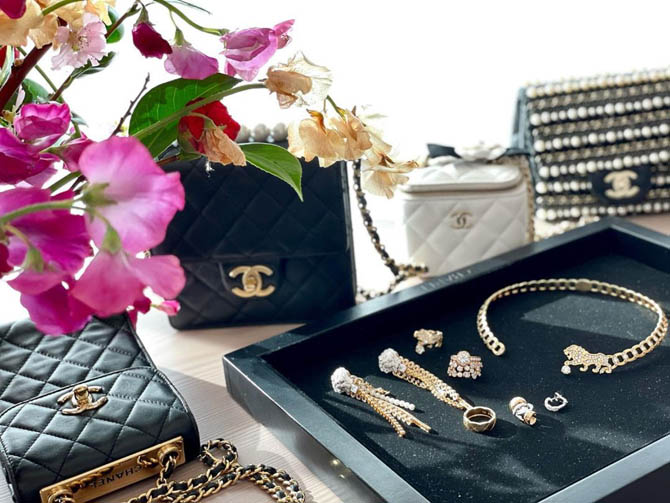 Shira Haas, the actress nominated for her role in Unorthodox, wore a Chanel gown and jewels for her moments on screen at the Globes. The star’s stylist Petra Flannery shared a detail shot of the accessories on her Instagram. 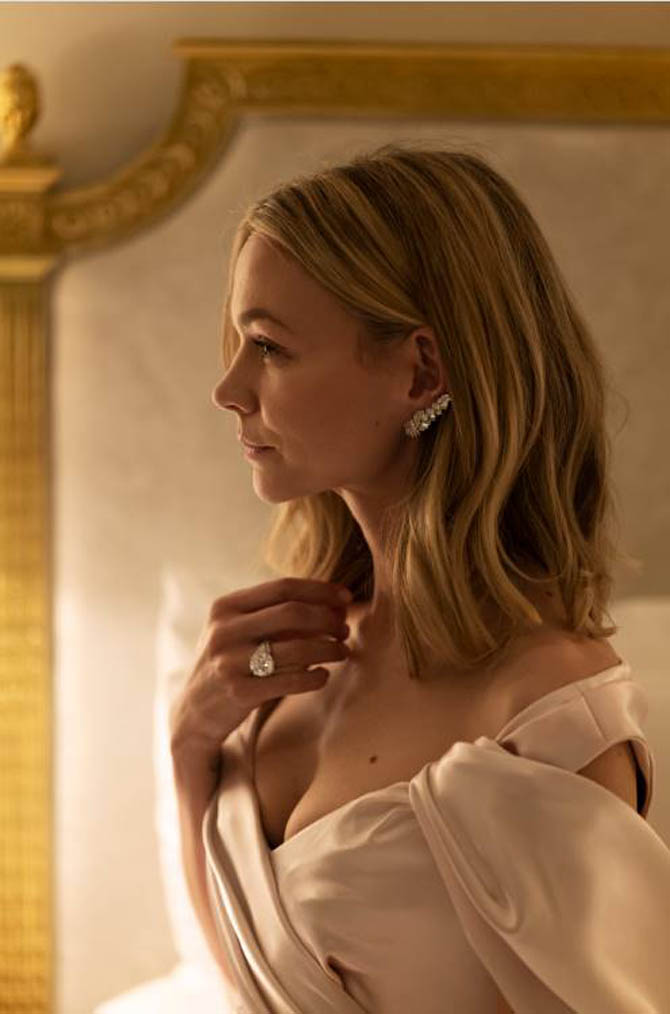 We got a nice look at Carey Mulligan’s gorgeous Cartier ear climber from her stylist’s Nicky Yates’s shot on Instagram. Another view showing the massive ring came later from Cartier. 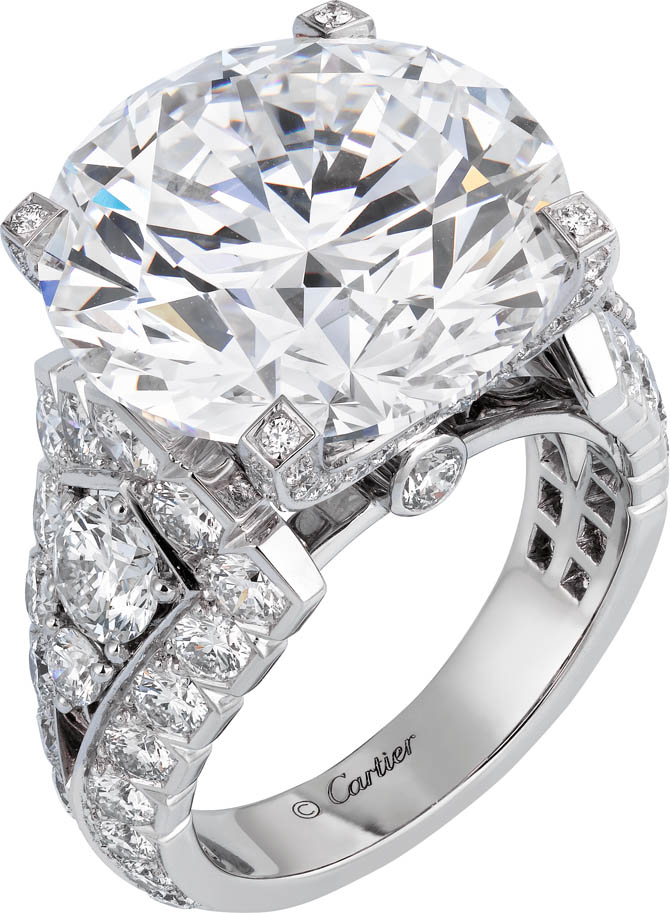 The Pluie de Cartier ring worn by Carey Mulligan has a a 15.28-carat center diamond. Renee Zellweger sported a single David Webb jewel to almost every major award show last year when she was nominated for her performance in Judy. The star picked up right where she left off for the Globes. 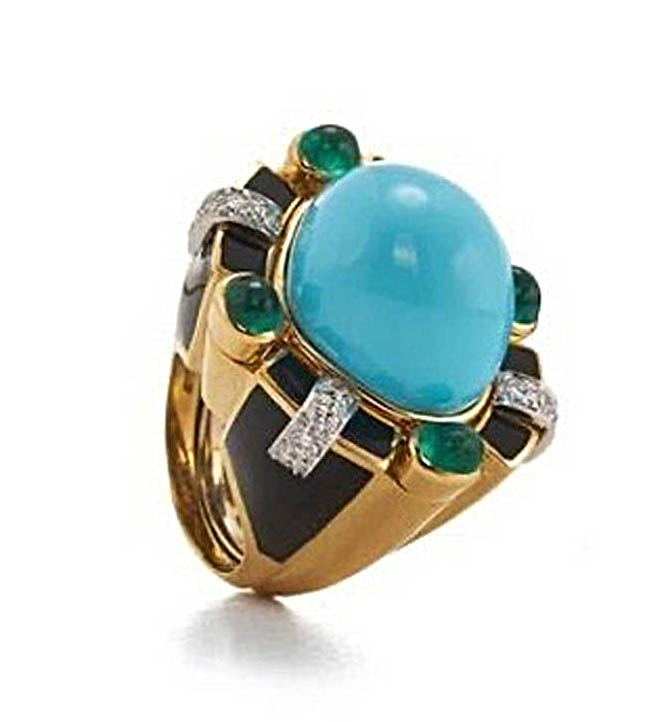 Every once in a while one of my jewelry predictions pans out. The Hanut Singh earrings from Fred Leighton proved to be one of those times. When I was thinking about the red carpet on the Friday before the show, I posted them on Instagram and mentioned the forthcoming red carpet. I had not heard anything about them being worn. I just had a hunch. Needles to say, I was thrilled to see Nixon, who was nominated for her role in Ratched wearing the jewels. It was hard to get a good look at Awkwafina’s Harry Winston jewels on the stage at the Globes. The detail images posted by her stylist Erica Cloud on Instagram showed how perfectly matched they were to the pink in her groovy gown. Jodie Foster may have been wearing pajamas when she won the Globe for role in The Mauritanian, but as they say, she made it fashion. The jammies were by Prada and she paired them with jewels from Neil Lane.

When The Jewelry At the Golden Globes Was Kind of Chill