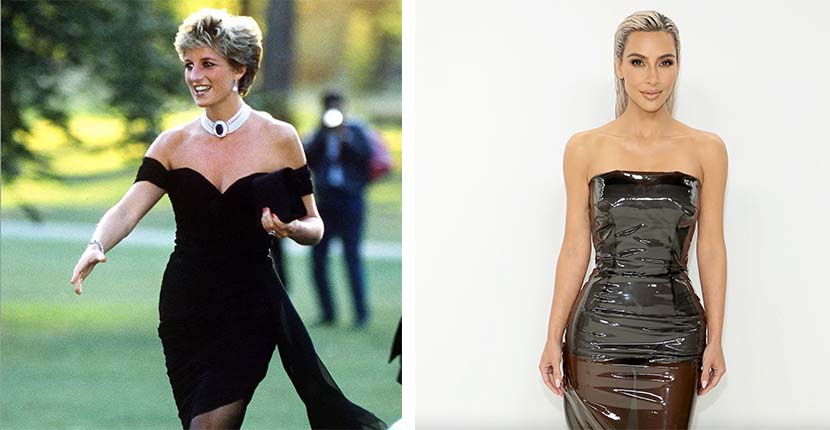 January 19, 2023—Kim Kardashian, or more accurately a representative for the reality tv superstar, swept in at the Sotheby’s London Royal and Noble auction last night and became the top bidder among the four people going after the giant Garrard cross Princess Diana wore publicly once in 1987. Kardashian paid $197,453 for the jewel. The price surged past the $147,000 high estimate.

The Fleurée cross which is set with approximately 4 to 5 carats of square-cut amethysts and circular-cut diamonds was among the few pieces Diana borrowed from a jeweler during her lifetime. (Find out about the royal’s short history of wearing jewelry loaned for an occasion here.)

The cross, made around 1920 which measures just over 5-inches long and about 4 inches wide, is the third jewel with an impressive provenance Kim Kardashian has acquired publicly at auction.

In a phone interview, the star told me at the time she had long wanted the Lorraine Schwartz jewels.

She felt a link to Elizabeth Taylor because she was the last person to interview her for a story published in Harper’s Bazaar.

In 2017, Kardashian beat out 12 other people in a heated flurry of bidding at Christie’s for Jackie Kennedy’s Cartier Tank watch. She paid a whopping $379,500 for the timepiece the former First Lady was photographed wearing on countless occasions. The high estimate for the watch was $120,000.

At the time, the general consensus was the classic watch didn’t exactly fit Kardashian’s style. Lo and behold, she seemed to agree and eventually sold the watch to the Cartier archives.

I don’t think Kardashian will have buyer’s remorse with the Garrard cross Diana enjoyed wearing. It is a giant statement jewel which completely matches the reality star’s larger than life personality.