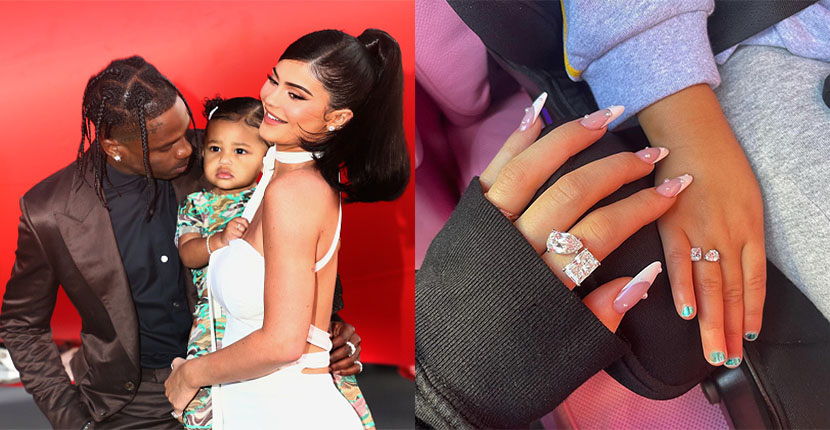 November 5, 2021—Few people on the planet have the talent for making headlines like the Kardashian-Jenner family. After the waves of press surrounding the massive Lorraine Schwartz diamond engagement ring Travis Barker gave Kourtney Kardashian a few weeks ago, another branch of the family has elbowed their way back into the headlines with jewelry.

I am not exactly new to the jewelry industry and in all my years I can say with absolute certainty, I’ve never heard of a diamond ring for a toddler. You think it might be fake? I think not. The Kardashian-Jenner women love the real deal or as we say in the business “natural diamonds.” And the gems on these rings look as real as can be.

Why did Travis give his women these rings?

No reason has been revealed. Kylie’s ring is not an engagement ring even though it looks like one. She isn’t wearing it on the third finger of her left hand.

In my opinion, it was a Keeping Up with The Kardashians maneuver. The Kravis relationship has become instantly iconic. I lost count of how many couples I saw on my Instagram feed dressed up as them for Halloween. I am guessing Travis, Kylie and Stormi were feeling a little left out of the news. And there is no way to get yourself back in the headlines faster than with some big-time baubles.

And about those baubles. They are right on trend. Two stone rings—historically referred to by the French term Moi et Toi for me and you—have been popular ever since Emily Ratajkowski received one in 2018. There is no denying Kylie and Stormi’s rings look almost exactly like Emily’s design. The differences are, in fact, quite subtle.

First, the diamonds in Kylie and Stormi’s rings are a pear-shape and a radiant cut as opposed to Emily’s pear and princess shape diamonds. The radiant is a similar style to the princess with lots of facets on the pavilion of the gem. Both shapes were invented in the late 1970s and have a disco ball vibe. The outline of Kylie’s radiant is not a square like Emily’s princess. It is closer to a rectangle or emerald cut diamond silhouette.

Second, Kylie and Stormi’s rings have a little gap between them whereas Emily’s are really jammed together.

Thirdly, there are the prongs on the two styles of rings. Emily’s ring has a v-shaped prong on the top of the pear shape. It is there to protect the tip from being broken. Kylie and Stormie’s rings have little subtler claw prongs holding the pear shape which are just a shade chicer.

Finally, I don’t know who made the ring and I don’t know the carat weights. They are big stones.  If I find out, this post will be updated.

All in all, the twinning mother-daughter jewels are seriously jaw dropping. Or as Khloe Kardashian articulately stated in the comments of Kylie’s Instagram post, “Daaaaammmmnnnnnnnnn.”

Who Made Emily Ratajkowski’s Engagement Ring?