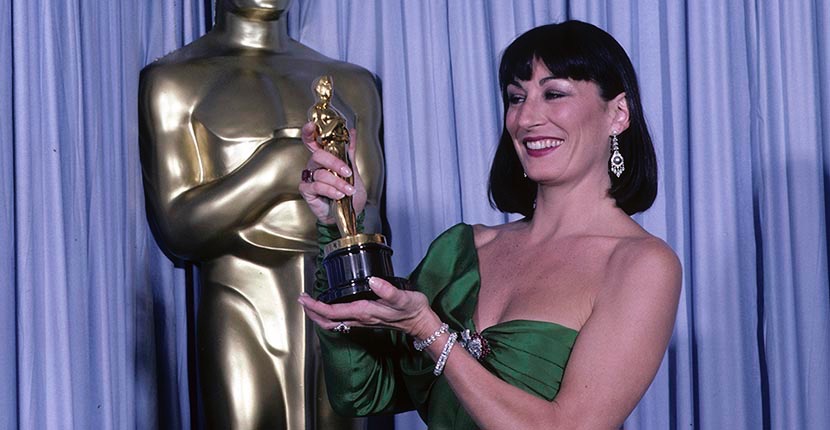 Angelica Houston wore vintage Art Deco jewels when she the Best Supporting Actress Oscar in 1986 for her role in 'Prizzi's Honor.' Photo Getty

Oscar Jewelry Highlights Over the Decades

There have been a few treasures and lots of personal pieces

Around Oscar time every year, I inevitably hear people who long for some glorious bygone era when, they believe, stars wore fabulous jewels from their own collections on the red carpet. They imagine the glamour that appeared on the silver screen took place in real life at the legendary Academy Awards ceremony. Or they might think jewels on a par with what appears today on the red carpet occurred in the past.

Well, I have done the research and there is very little in terms of big-time jewelry. Elizabeth Taylor is the main exception to this rule. She invented the idea of wearing priceless pieces to the Oscars. And yes, all the jewelry was hers. Other iconic actresses—Sofia Loren, Gloria Swanson and Ginger Rogers—also wore beautiful jewels of their own. But the list of Oscar winners and presenters who appeared in super glam jewels is not too long. For the most part, what women wore and owned were not the type of treasures that wow fashion and jewelry critics today. In other words, the same people that long for yesteryear might be disappointed. Then again they might prefer it.

I like what the red carpet brings today, the best and brightest baubles having a night on the town in Hollywood. I am also nostalgic for the way women wore jewels in the past. I enjoy how they reflect fine jewelry styles of the era as opposed to the fantasy experience of contemporary times.

Take a look at some of the jewelry highlights from the 1920s to the 1990s below. I stopped in the mid-nineties because that is when the red carpet began to change with the introduction of stylists coordinating couture clothes and High Jewelry loans. Oh, and if you are wondering why some of the pictures are not necessarily the best angles or clearest shots, that’s because there wasn’t the same kind of red-carpet coverage and step-and-repeat to get the shot that there is today. More than the jewelry has changed at the Oscars. 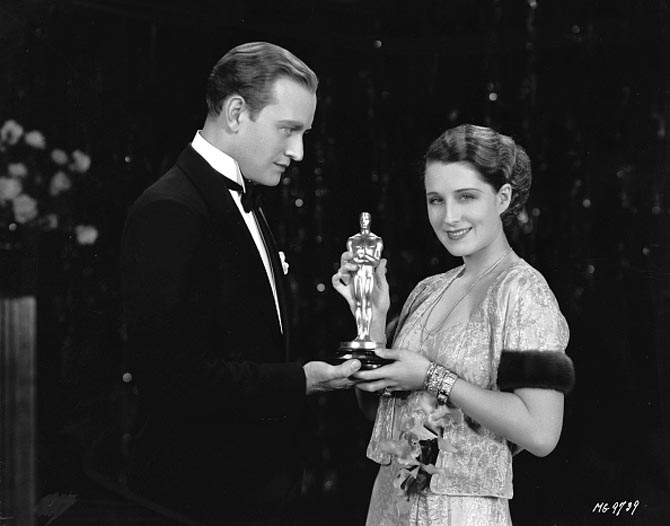 In 1931, Norma Shearer turned up in an armful of Art Deco bracelets to receive the Best Actress Oscar from Conrad Nagel for her role in The Divorcee. The actress was married to MGM’s head of production Irving Thalberg. The union inspired Joan Crawford to famously quip, “How am I supposed to get ahead when Norma’s sleeping with the boss?” 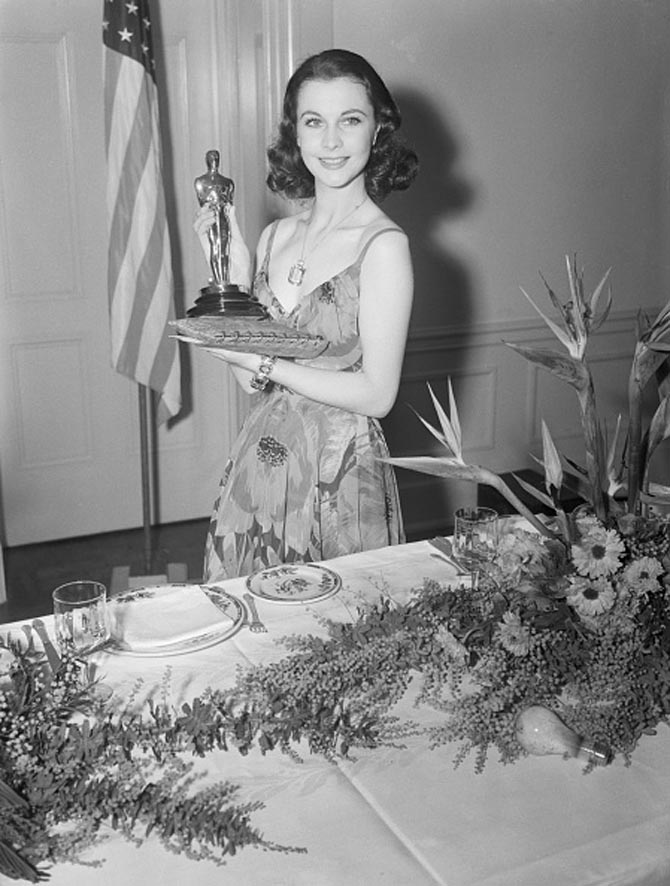 Vivien Leigh posed behind a dinner table after she won her Best Actress Oscar on March 2, 1940 for her portrayal of Scarlett O’Hara in Gone With the Wind. She wore a printed floral gown and large aquamarine pendant and matching bracelet. America had not entered World War II yet, but the conflict was underway in Europe and styles were respectfully low-key. In the jewelry business wartime shortages included a cut off of the supply of precious stones and restricted use of platinum which was used as a catalyst for fuel by the military. These changes lead to the rise of large semiprecious stones and yellow gold coming into style. The pieces Leigh wore were likely purchased around the time of the event. 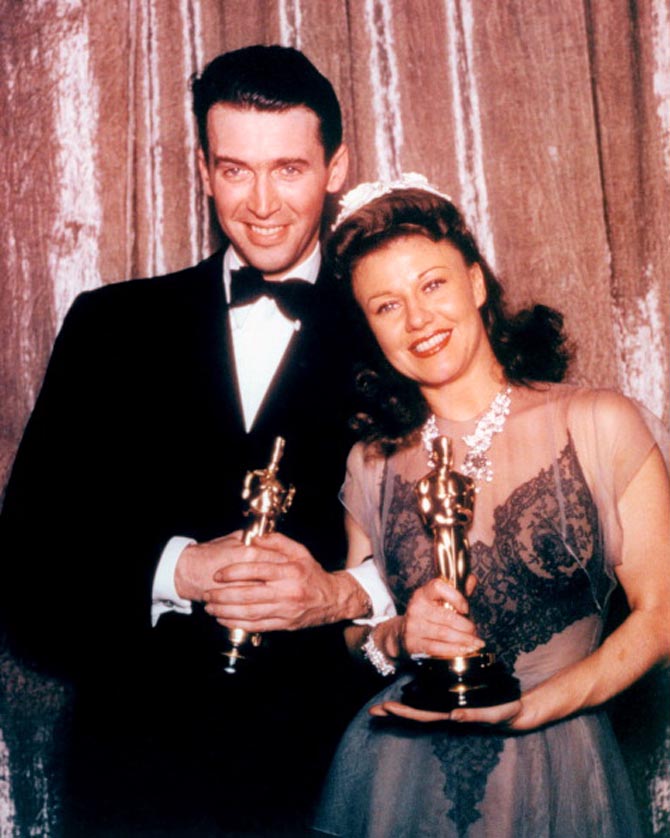 In 1941, James Stewart posed with his Best Actor Oscar for Philadelphia Story and Ginger Rogers who won Best Actress for her role in Kitty Foyle. She appears to be wearing a open diamond necklace with a floral pattern by one of Hollywood’s favorite jewelers, Paul Flato. It is very similar in style to the necklace seen here that sold at Christie’s in 2018 for almost half a million dollars. Rogers had several jewels from Paul Flato in her collection dating from the 1930s. 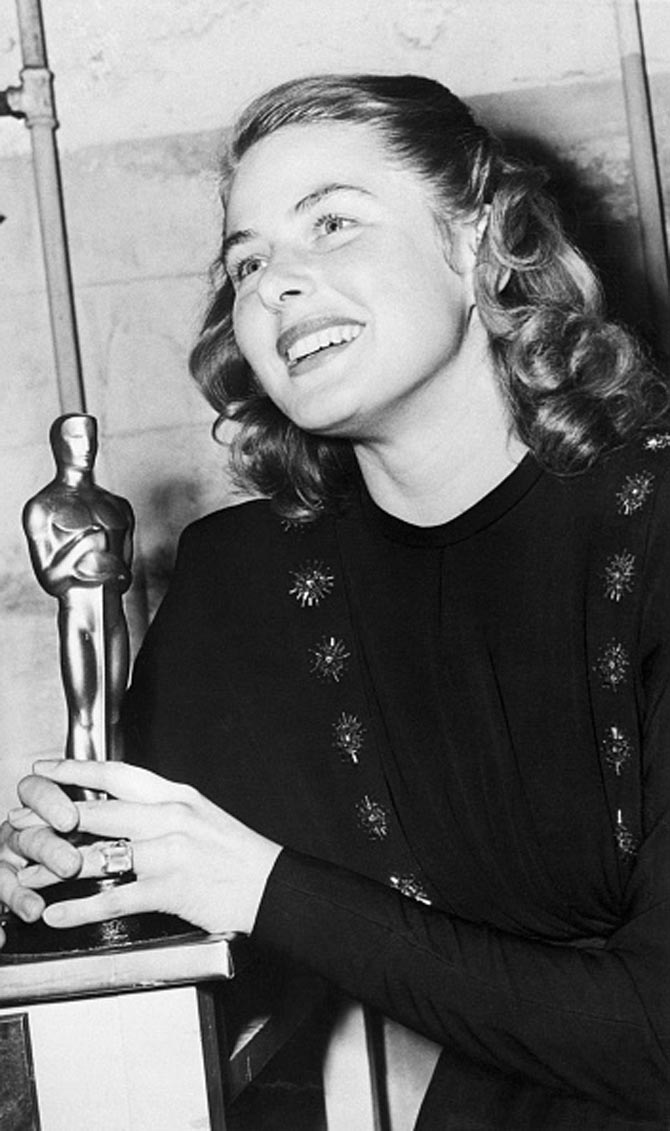 Ingrid Bergman in 1945 with the Oscar she received for her performance in Gaslight, in which she costarred with Charles Boyer.

When Ingrid Bergman won the Best Actress Oscar in 1945 for her performance in Gaslight fashions were restrained and somewhat sober as World War II had been underway for years. Bergman’s only jewel for the evening was her impressive emerald-cut diamond ring. 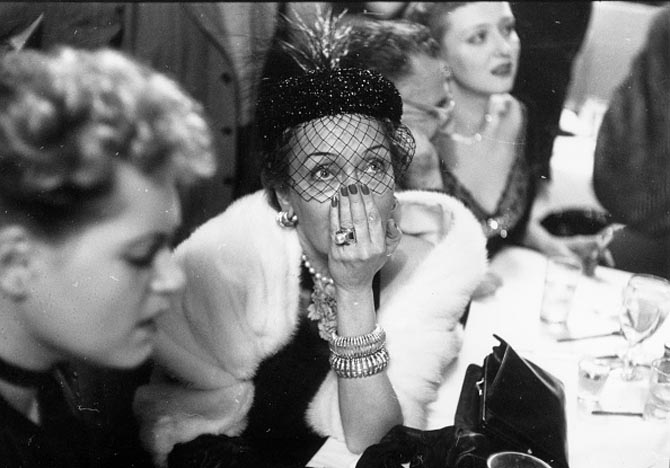 In 1951, Gloria Swanson—who was nominated for the first Academy Award ever given—anxiously awaited the results of the Best Actress award for her legendary performance as Norma Desmond in Sunset Boulevard at the La Zambra nightclub in New York City, during a live radio link with the Oscars ceremony in Los Angeles. On her left is her fellow nominee, Judy Holliday who ended up winning the prize for her comedic turn in Born Yesterday. For the ceremony, Swanson wore jewels that had been in her collection since the 1930s. On her wrist is two crystal and diamond cuffs made by Cartier. Her triple hoop diamond earrings are by Paul Flato. 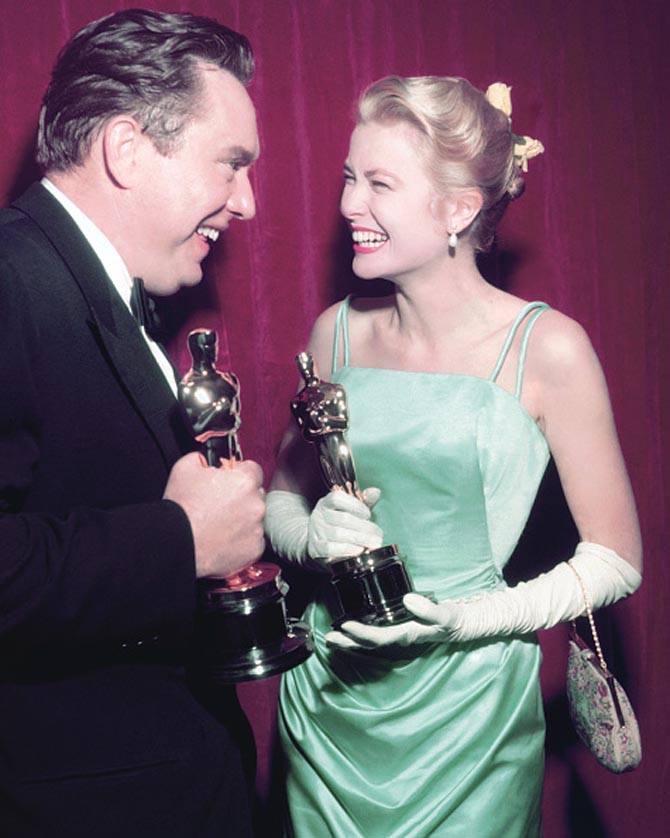 In 1955, Edmond O’Brien who won Best Supporting Actor for his role in The Barefoot Contessa posed with Grace Kelly who won Best Actress for her role in The Country Girl. The mid-20th century was an age of serious dress etiquette. Women wore white gloves regularly for formal occasions. It was viewed as improper for young unmarried women to wear important diamond jewelry. Seriously. Kelly was 25 when she won the Oscar and her small pearls were the “appropriate” jewels to wear for someone her age. 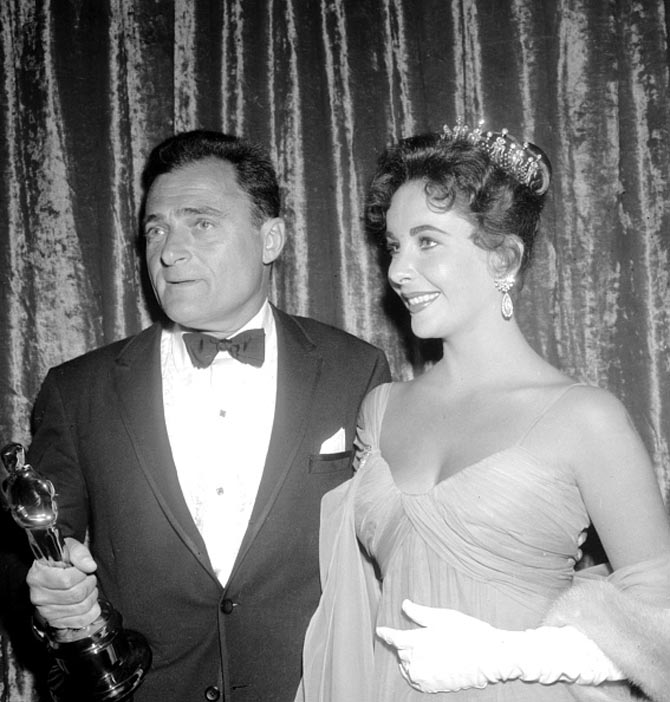 In 1957 Elizabeth Taylor wore a antique diamond tiara to the Academy Awards ceremony she attended with her second husband producer Mike Todd, who won the Oscar for Best Picture for his film Around The World In 80 Days. In her book, My Love Affair With Jewelry, Taylor said “When Mike gave me this tiara, he said, ‘You’re my queen, and I think you should have a tiara.’” The tiara wearing of the 1950s was inspired by the marriage of Queen Elizabeth II of England in 1947 and her subsequent coronation in 1953. After the big royal events, the tiara remained a popular style for Americans to wear at galas.

Mike Todd delivered a bit of his own signature wit and ironic humor when the infamous gossip columnist Hedda Hopper asked him about the jewel in the press room after he won the Best Picture Oscar. He looked Hopper in the eye and said simply, “Doesn’t every girl have one?” 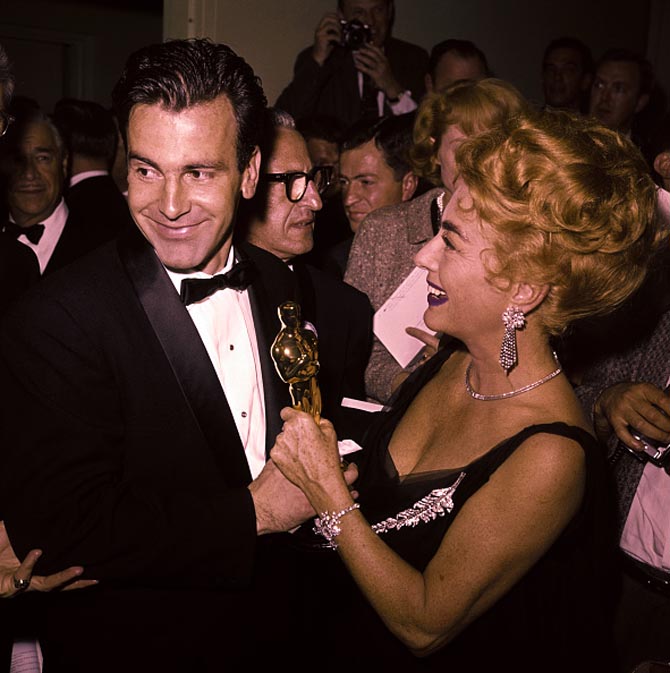 In 1962, Best Actor winner Maximilian Schell was captured by the photographers holding the statuette he won for his role in Judgement at Nuremberg with actress Joan Crawford who was decked out in diamonds from her collection. The large feather brooch and diamond rivière came from the Los Angeles jeweler Ruser. Those two pieces are featured in the book I co-authored with Penny Proddow, Hollywood Jewels: Movies, Jewelry Stars. I suspect Crawford’s other diamond jewels were from Ruser as well. A mid-century favorite, Ruser was located on Rodeo Drive in the same building Van Cleef & Arpels occupies today. William Ruser, a jewelry veteran, was a beloved local figure. People of a certain age in LA who knew the man all refer to him as “Billy Ruser.” 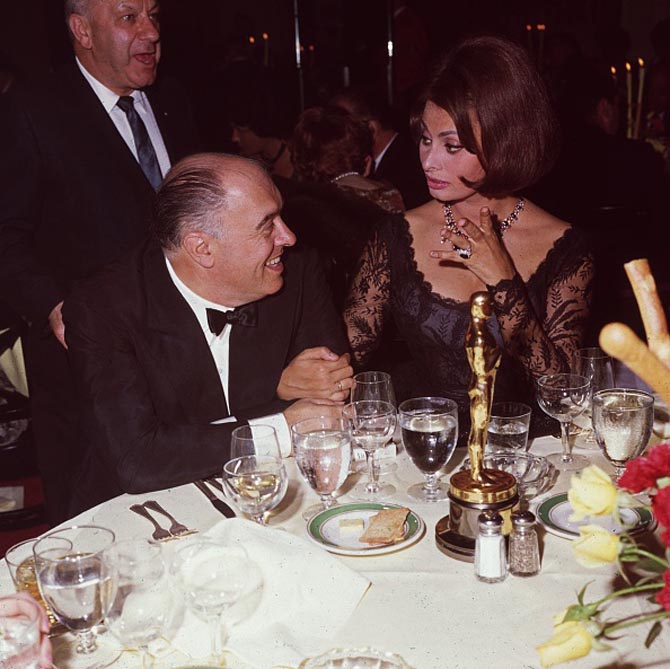 In 1962 Sophia Loren was photographed wearing her Bulgari necklace with her film producer husband Carlo Ponti at dinner after winning the Academy Award for her emotional performance in La Ciociare (Two Women). The Italian actress put on her spectacular bib of diamond, cabochon sapphires and rubies for several occasions during the 1960s. It epitomized the type of colorful and bold jewelry that Bulgari would continue to create throughout the decade and on into the 1970s. 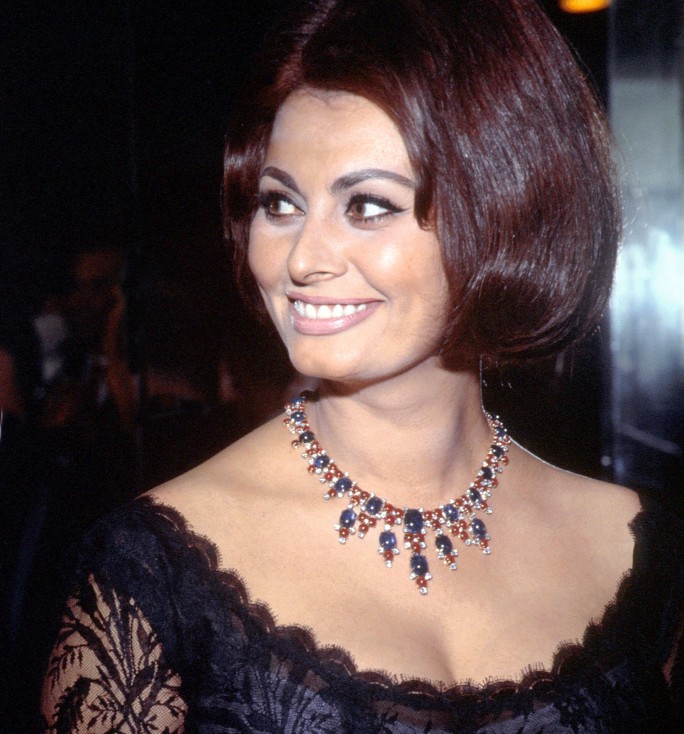 Sofia Loren wearing her Bulgari necklace at the Oscars in 1962. 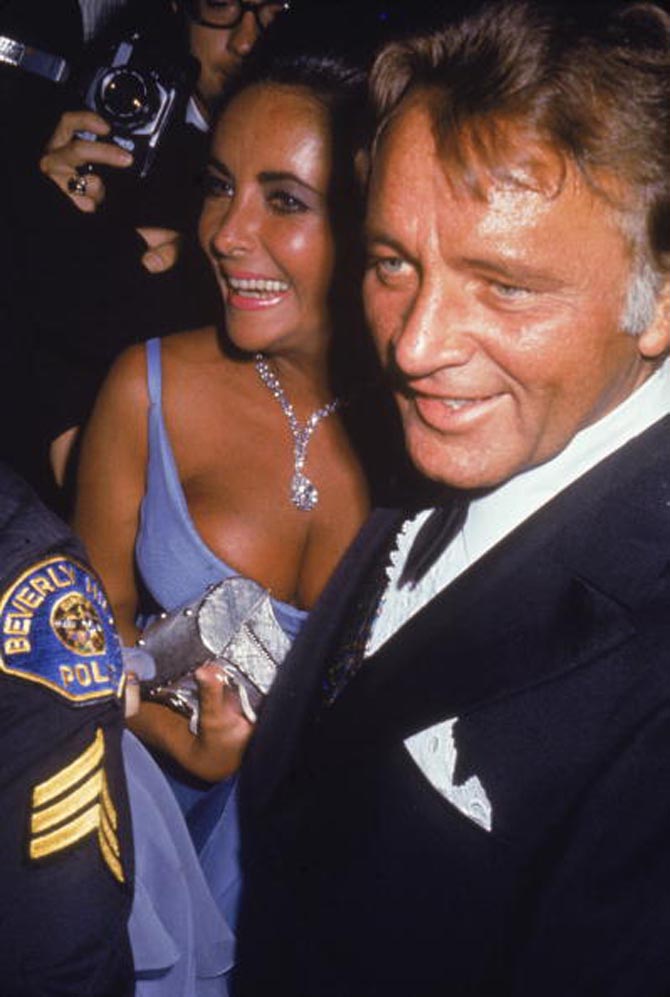 As I said in the introduction to this story, there once was a time when there was no step and repeat red carpet at the Oscars and Elizabeth Taylor invented the idea of wearing priceless pieces to the ceremony. In 1970 the actress wore the 69.42-carat pear-shape Taylor-Burton diamond on pear-shape diamond necklace by Cartier. There are no pictures of her posing in the necklace that night. She was snapped seated at her dinner table talking, eating, drinking and smoking. There are also a few images like this one of Taylor in a crush of the crowd with her fourth husband, Richard Burton. Find out about the complete history of the storied stone that is also known as the Cartier Diamond here. 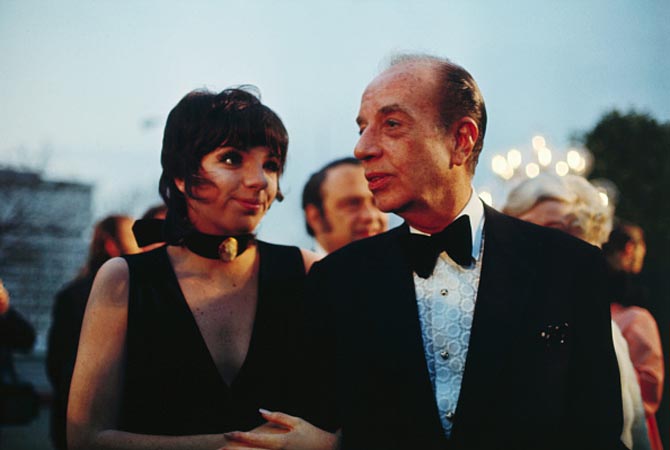 In 1969 Liza Minnelli, who was nominated for her role in The Sterile Cuckoo, attended the ceremony with her father, famed director Vincent Minelli. For the occasion she wore a vintage cameo on a wide neck scarf. It was an accessory that foreshadowed the interest of young Hollywood in vintage jewelry during the 1970s. 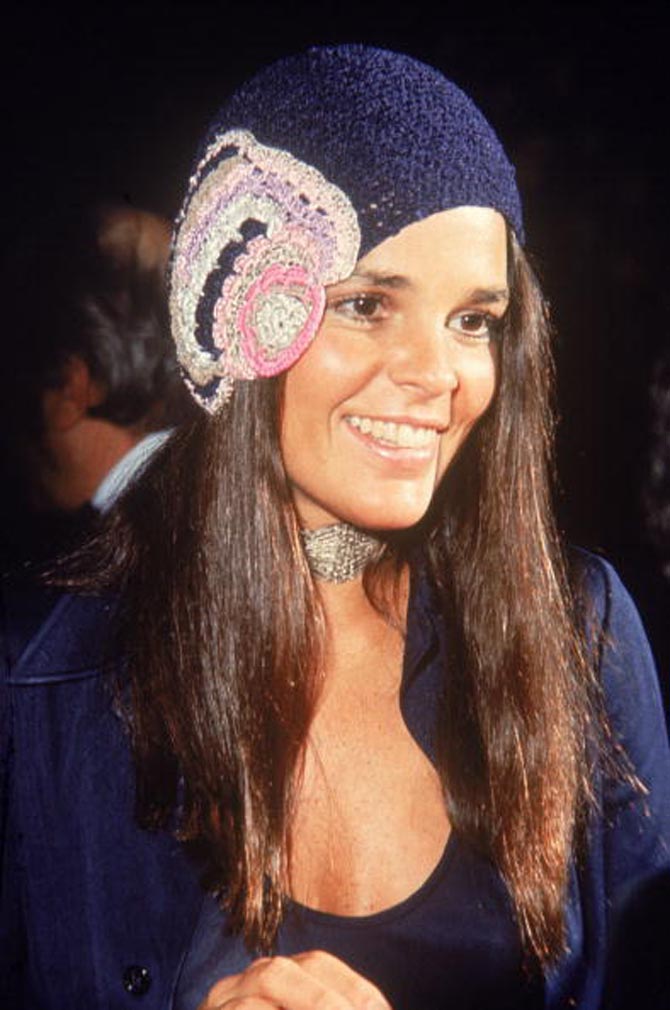 In 1971, Ali MacGraw wore a crocheted cap and a wide vintage choker to the Academy Awards that she attended with her husband Robert Evans who was head of production at Paramount Pictures. MacGraw wore the jewel, that could be taken apart and styled as two bracelets, perpetually during the 1970s with jeans and at formal occasions. See more about her 1970s style here. 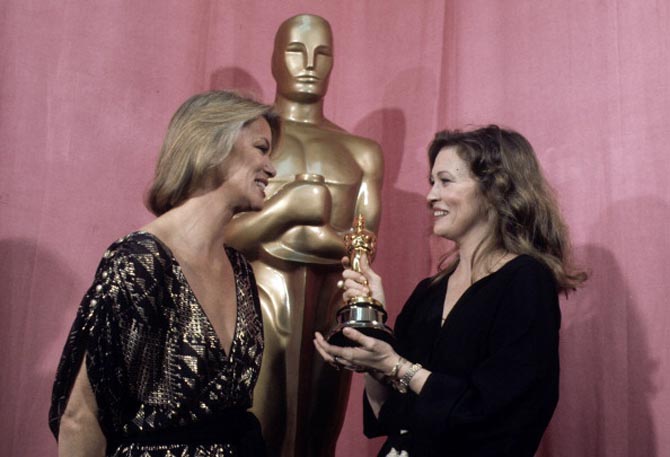 Louise Fletcher, who won the Academy Award for her 1976 role in One Flew Over the Cuckoo’s Nest, was photographed with Faye Dunaway holding her Best Actress Oscar in 1977 for her role in Network. As you can see in the image Dunaway seems to have just tossed on her everyday watch and a couple of bracelets for the ceremony. Generally speaking, it was in line with how women were bejeweled at the Oscars in the seventies. The glamour of Dunaway’s win was captured later in the iconic image of the star by the pool at the Beverly Hills Hotel in a silk robe taken by her future husband, British photographer Terry O’Neill. 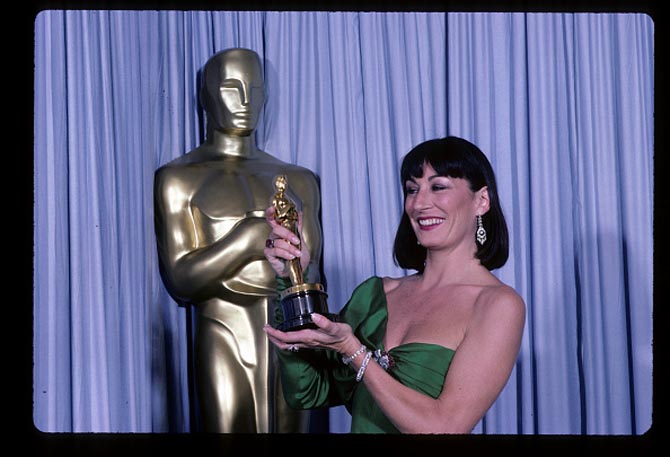 During the 1980s the diamond wattage did begin to turn up again a bit on some actresses at the Oscars. No one, however, during the go-go decade was quite as chic as Anjelica Huston in 1986. When she won the Best Supporting Actress prize for her role in Prizzi’s Honor, a film directed by her father John Houston, she wore vintage Art Deco jewels. Vintage was not a trend at the time. I suspect the pieces were her own or perhaps they were loaned by a friend. The look foreshadowed where jewelry would go in the 1990s. 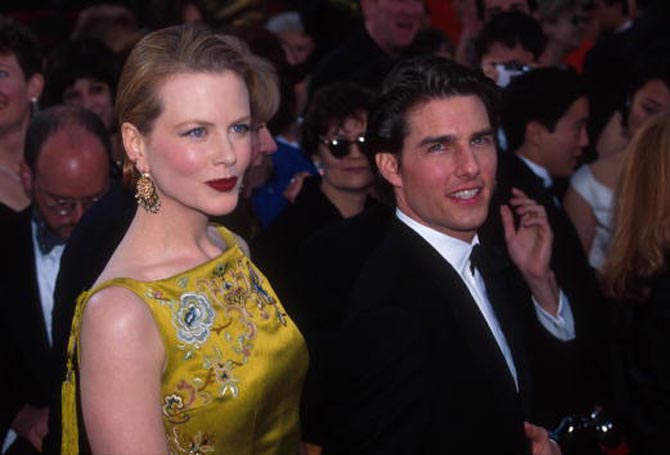 In 1997 Nicole Kidman attended the Oscars with her husband Tom Cruise who was nominated for his role in Jerry Maguire. She wore a couture gown designed by John Galliano for Dior and vintage Mughal style Indian pendants transformed into earrings with diamond studs from Martin Katz. The impact of the look was epic. It marked the beginning of the modern era on the red carpet. The biggest names in fashion began to dress the stars for the event. It would take years, however, for the largest jewelry labels to get in on the action. During the 1990s, designers based in Los Angeles ruled the red carpet. Find out more about the period here.

A Look Back At Ali MacGraw’s Cool Jewelry Style