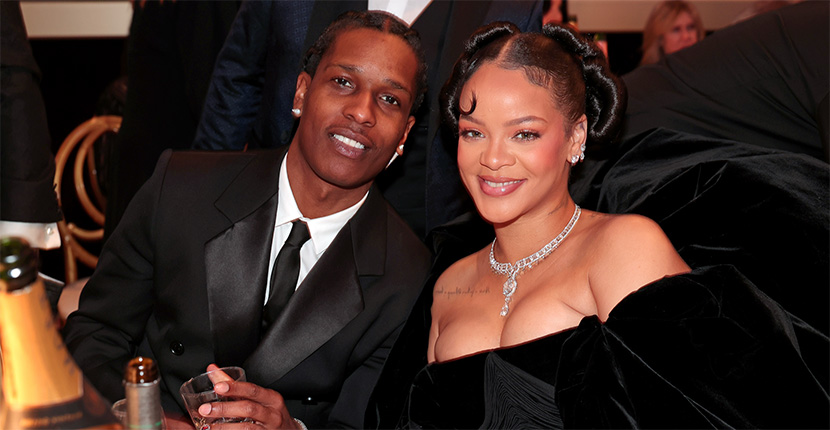 At the 2023 Golden Globes, A$AP Rocky with Rihanna who is wearing a Cartier diamond necklace and Reza diamond stud among other jewels. Photo Getty

She went big while others chose understated styles by Hollywood standards

January 11, 2023—If you had forgotten why the Golden Globes weren’t on TV last year, host Jerrod Carmichael made it pretty clear in his opening monologue. It had been exposed the Hollywood Foreign Press Association didn’t have any Black members. There were other issues too like a pay-to-play mentality of some journalists in the organization and questionable credentials of others. Now, the story is that the group behind the Golden Globes is getting its act together.

So, NBC decided to air the event. Nevertheless, a handful of big stars skipped it. Most who attended kept their looks relatively low-key by Hollywood standards. Lots of ladies pushed all their sparkle down to their wrists or fingers making their treasures pretty hard to see on TV or in photos. It was understandably understated for a Globes red carpet considering people were a little queasy about the show that was once a big glamour event.

And then there was Rihanna.

Nominated in the Best Original Song category for “Lift Me UP” from Black Panther: Wakanda Forever, the new mother elevated the entire sartorial experience at the Golden Globes.

She paired her voluminous black Schiaparelli gown with grand diamond jewels from Cartier and a few other designs in the mix.

Cartier didn’t release carat weights of the design at press time, but the total is obviously up there. And all of it is capped off with a center element that is a symphony of stones suspending a half-moon diamond and ginormous pear-shape diamond pendant.

On just about anyone else the necklace might wear them, but Rihanna wore it as breezily as the Savage x Fenty jerseys, sweatpants and beanies from the Game Day collection she dropped in celebration of her February 12 halftime performance at the Super Bowl.

Rihanna always styles jewelry in a way that makes it her own. While others may have stopped their styling at the Cartier statement necklace, Rihanna added several earrings to the look.

She put on one of a pair of Cartier High jewelry pendant earrings with multiple shapes of fancy cut diamonds set in platinum.

She didn’t wear the jewel in her first ear piercing. She put the piece in a top hole or helix position so it dangled down her lobe.

Rihanna also tossed on a pear shape diamond stud from Reza as an accent on her ear. She sported a pair of round studs from Jacob & Co.

My RiRi experts in the field think she might have a Maria Tash earring on the tragus. She is a fan of the ear piercing experts. She also had on a Maria Tash diamond drop.

The eagle eyed also spotted a pear-shape diamond “she always wears” among the other jewels.

I could go on-and-on about Rihanna’s look, analyzing the psychology of bejeweling for a big event and the lift of jewelry joy, but I have already written over 500 words.

I will just add this. Rihanna is clearly revving up for the season. Let’s hope she is nominated for an Oscar. She is obviously ready for the Super Bowl.

Rihanna’s Jewelry Glow Was All Vintage