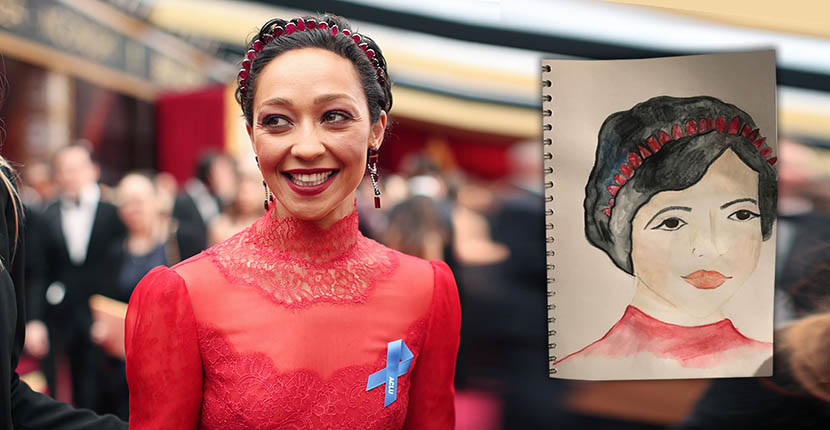 Ruth Negga in the Gemfields x Irene Neuwirth tiara and earrings at the 2017 Oscars; (Inset) Irene's design of Ruth in the jewel Photo by Christopher Polk/Getty Images; Drawing courtesy of Irene Neuwirth 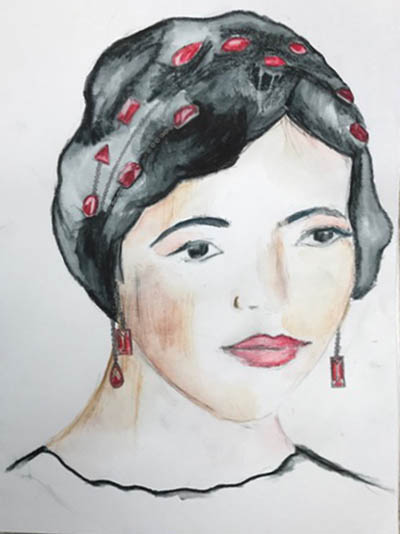 It all started the day after the Oscar nominations were announced on January 25, 2017.  Just twenty-four hours after Ruth Negga’s stylist, Karla Welch received the news that her client was nominated for an Academy Award, she called Irene Neuwirth.  The imaginative stylist, who had been dressing Negga in creative jewels featuring Gemfields rubies and emeralds all Awards Season, had something extra special in mind for the Oscars and she knew Irene was just the designer to create it.

“Karla told me she envisioned rubies throughout Ruth’s hair,” remembers Irene.  “I started doing sketches and exploring the idea right away.  I was thinking something medieval, then I started to consider how the piece would be seen on the red carpet.”

The Los Angeles based designer who usually creates around the concept of  gems and colors like an abstract painter, began to study historical tiaras during her extended stays in London, visiting her boyfriend director Phil Lord who is there filming the next Star Wars movie about young Han Solo.  “I went to see the Crown Jewels at the Tower of London,” remembers Irene.  “And I bought every book on tiaras I could find.”

Staying in constant communication with Karla, the twosome decided to move away from the gems in the hair idea to a tiara.  While there isn’t really an exact historical reference to Irene’s design, the silhouette is vaguely reminiscent of the 1930s Cartier Halo Scroll tiara from the royal collection Kate Middleton wore on her wedding day.  One of the greatest points of difference between Irene’s creation and vintage work is the sole focus on rubies.

The Mozambique Gemfields rubies laid out in two design patterns by Irene Neuwirth for Ruth Negga’s Oscar tiara. The numbers next to the gems on the left are carat weights. Photo courtesy

Irene carefully chose every Mozambique ruby for the jewel.  Each one is a unique shape and size.  Next, she laid the stones out in her signature collage style along a simple gold band.  Before putting the piece featuring 146-carats of rubies into production Irene, who was working from London, had her team in Los Angeles, where the stones were located, create a mock-up.  They carefully cut out the shape of each gem in paper, placed it on a headband and essentially did some selfies.  “I wanted Karla to know exactly what it was going to look like so there were no surprises,” says Irene.  “The one thing Karla requested was blackened metal which is not something I usually do, but it totally worked.”

Irene rounded out a coordinated suite of jewelry with designs from her collection revamped in Gemfields rubies, diamonds and blackened 18K gold.  There was a 14.89-carat Gemfields ruby and diamond ring and earrings set with 27.18-carats of Gemfields rubies and 3.26-carats of diamonds. 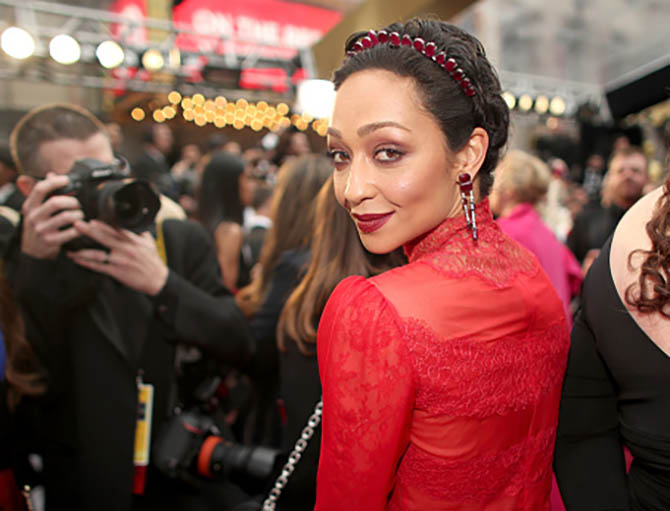 When the Loving star hit the red carpet in the jewels with her custom-made Valentino gown and blue ACLU ribbon, it instantly became an iconic Oscar moment.  The styling of pendant earrings with the tiara was a throwback to the way royals paired their jewels in the early twentieth century.  Yet overall the look was completely twenty-first century.  It’s also worth noting, the set of jewels marks another major appearance of a suite on the red carpet, making it safe to now officially say, matchy-matchy is back in a major new way.