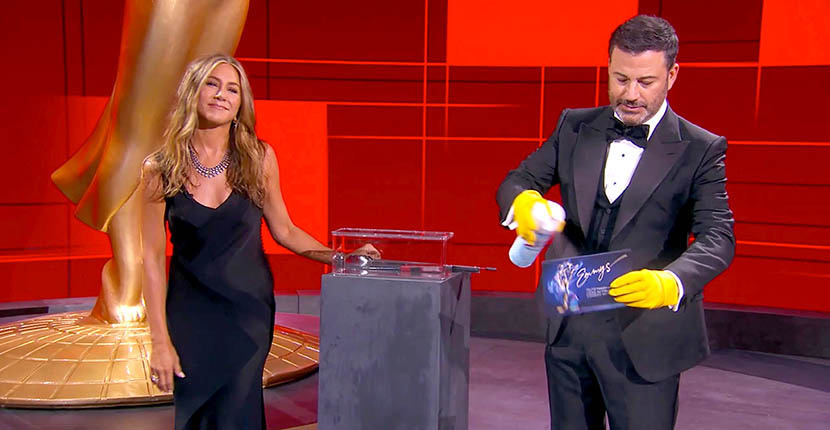 The Best Jewelry at the 2020 Emmys

Yes, there was jewelry…even though there wasn’t a red carpet

Usually for an award show we get our red-carpet coverage of the jewelry live the night of the event. Well, there was no red carpet for the Emmys this year. And the photos of the jewels were not in one place. They came in via screen grab, Instagram, Instagram Stories as well as the traditional Getty photo archives.

Long story short, it took us a minute to get our coverage together.

All in all, major necklaces definitely had a few nice appearances which was kind of a surprise

See what else caught our eye in the details of the looks below. 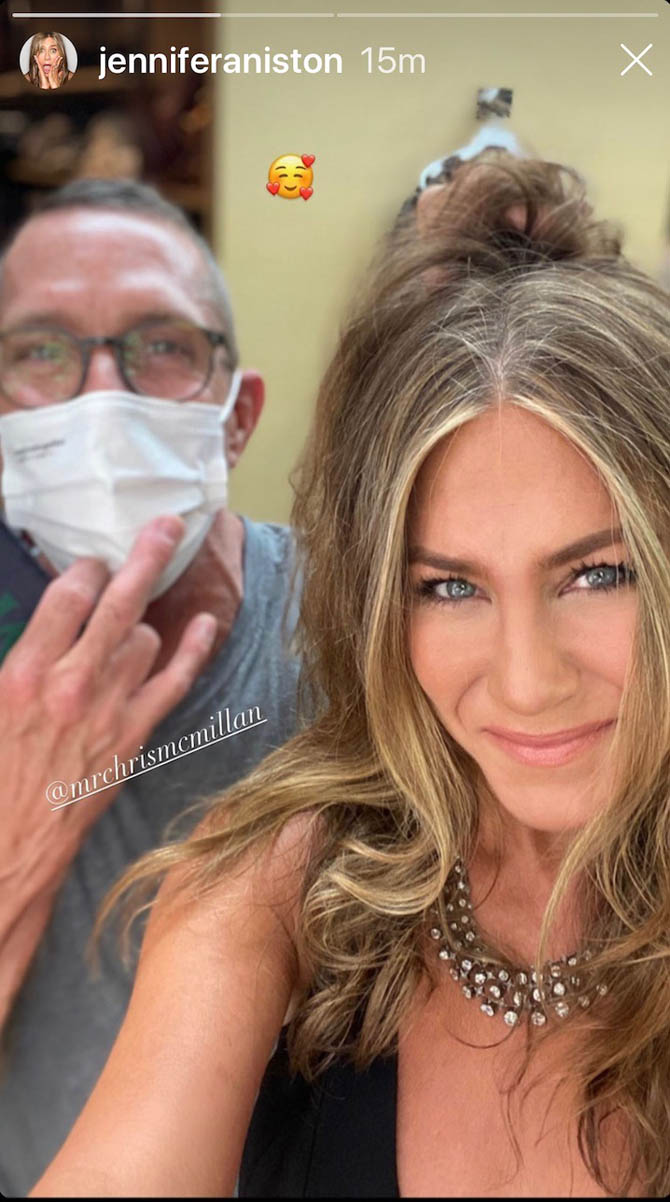 Jennifer Anniston was the first female star to appear on the show. I have to admit it was a thrill to see her wearing such a big diamond jewel. She shared the detail shot above on her Instagram Stories. Eager to find out immediately where it came from, I reached out to Neil Lane thinking the jewel might be his and I was right. The piece came from his vintage couture collection. He said the 19th century jewel was set with over 50-carats of diamonds. 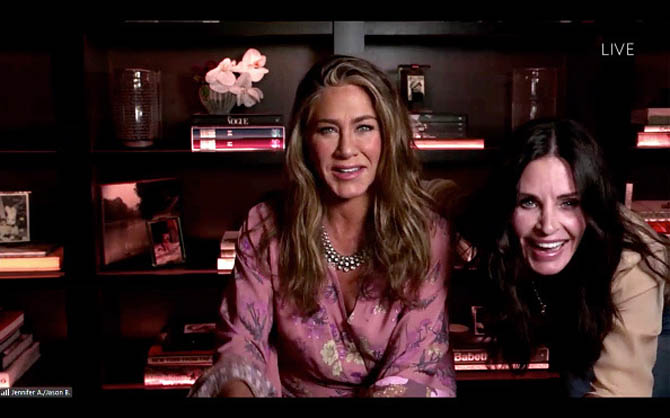 Aniston kept on the jewel when she appeared again wearing it with a fancy bathroom. It was for an at home skit with her friends from Friends, Courtney Cox and Lisa Kudrow. 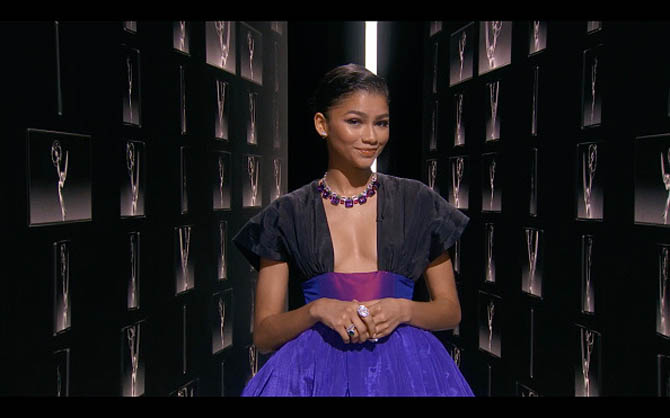 Zendaya made the most glamorous appearances of any star with two sensational looks. Her first debuted on her stylist Law Roach’s Instagram and then on the set at the Staples Center in Los Angeles.  It included a Christopher John Rogers Gown and Bulgari jewels. 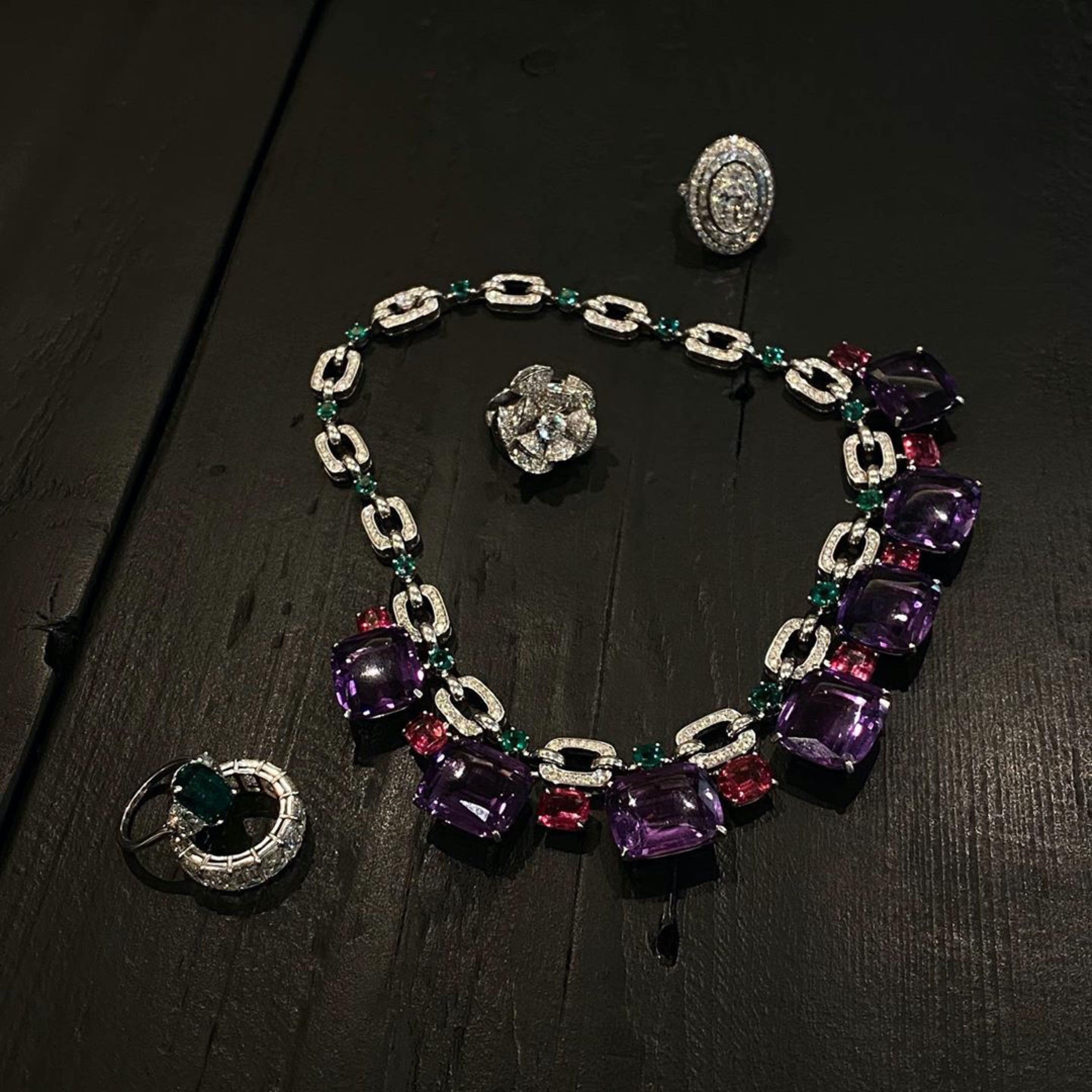 In this moment when do-it-yourself is done by all, Zendaya took the picture of the jewels Roach posted on Instagram. The jewels include a 132-carat amethyst necklace, accented with rubellites, emeralds and diamonds, diamond studs, three diamond rings and an emerald ring. 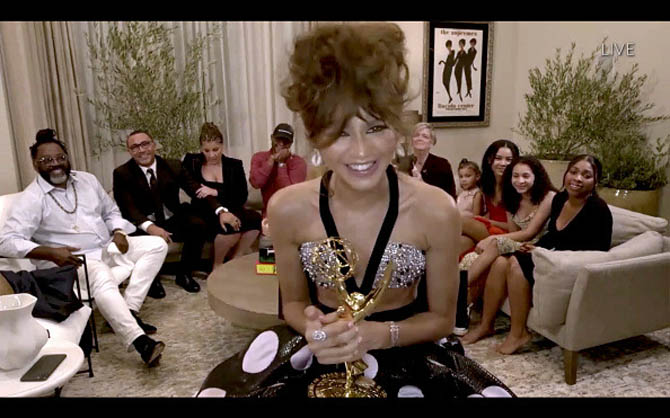 Zendaya changed into a dress by Giorgio Armani Privé and different Bulgari jewels for the moment when she won the Emmy for Best Actress. Her selection of jewels included a diamond, mother-of-pearl and pink gold Serpenti high jewelry bracelet, pavé-set diamond, opal and pink gold earrings and a ring set with almost 7-carats of diamonds. 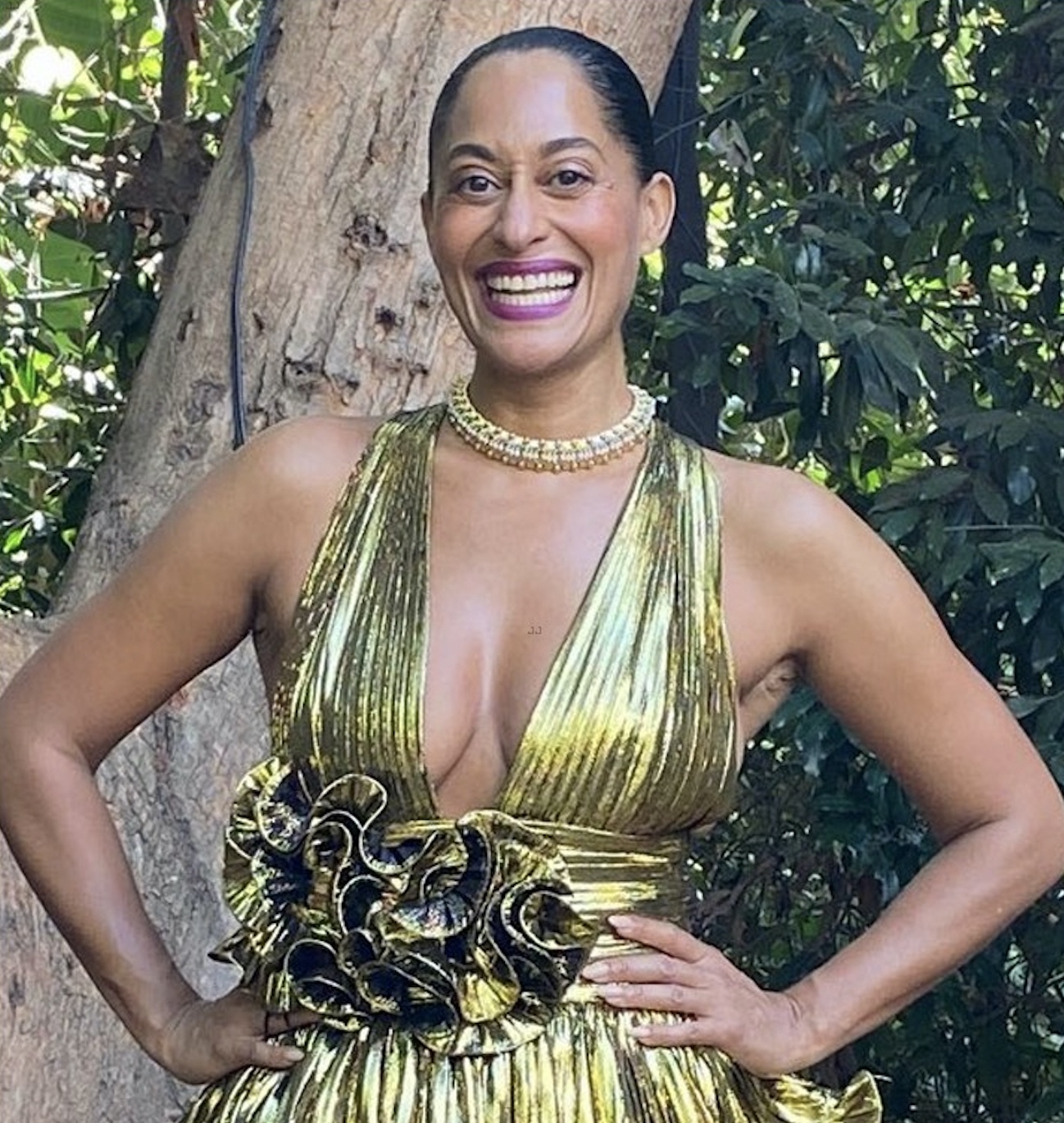 Tracee Ellis Ross joyfully made a red carpet moment in her yard with an actual slice of red carpet and posted a series of images on Instagram. She also appeared on the program to present wearing the Alexandre Vauthier gold dress and vintage gold and diamond Jean Schlumberger for Tiffany Hands choker. Cynthia Erivo has such an iconic ear even with her head down and face covered in a black and white shot on her stylist Jason Bolden’s Instagram Stories you know it is her. For the Emmys, she appeared on stage wearing a Versace mini-dress and all kinds of diamond jewels.  Several of the pieces were from Tiffany. 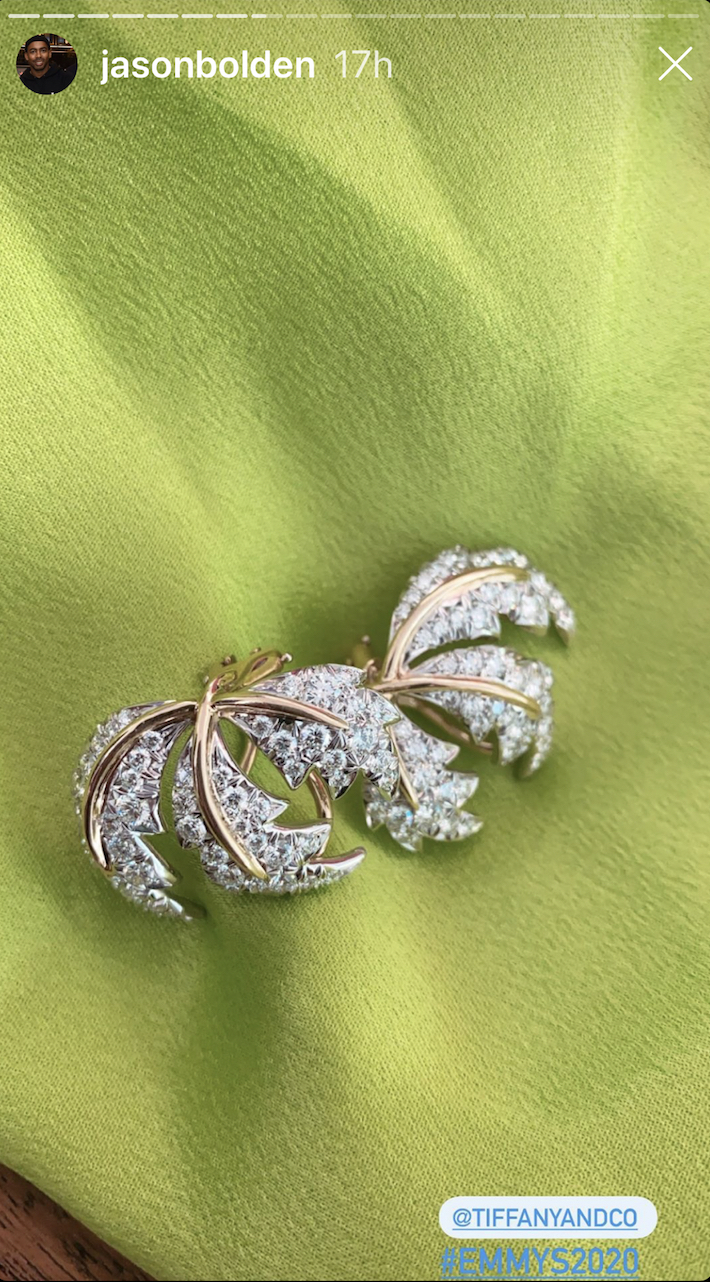 A second shot from her stylist Jason Bolden gave a detail look at the diamond Three-Leaf earrings by Tiffany designer Jean Schlumberger that were among her assortment. 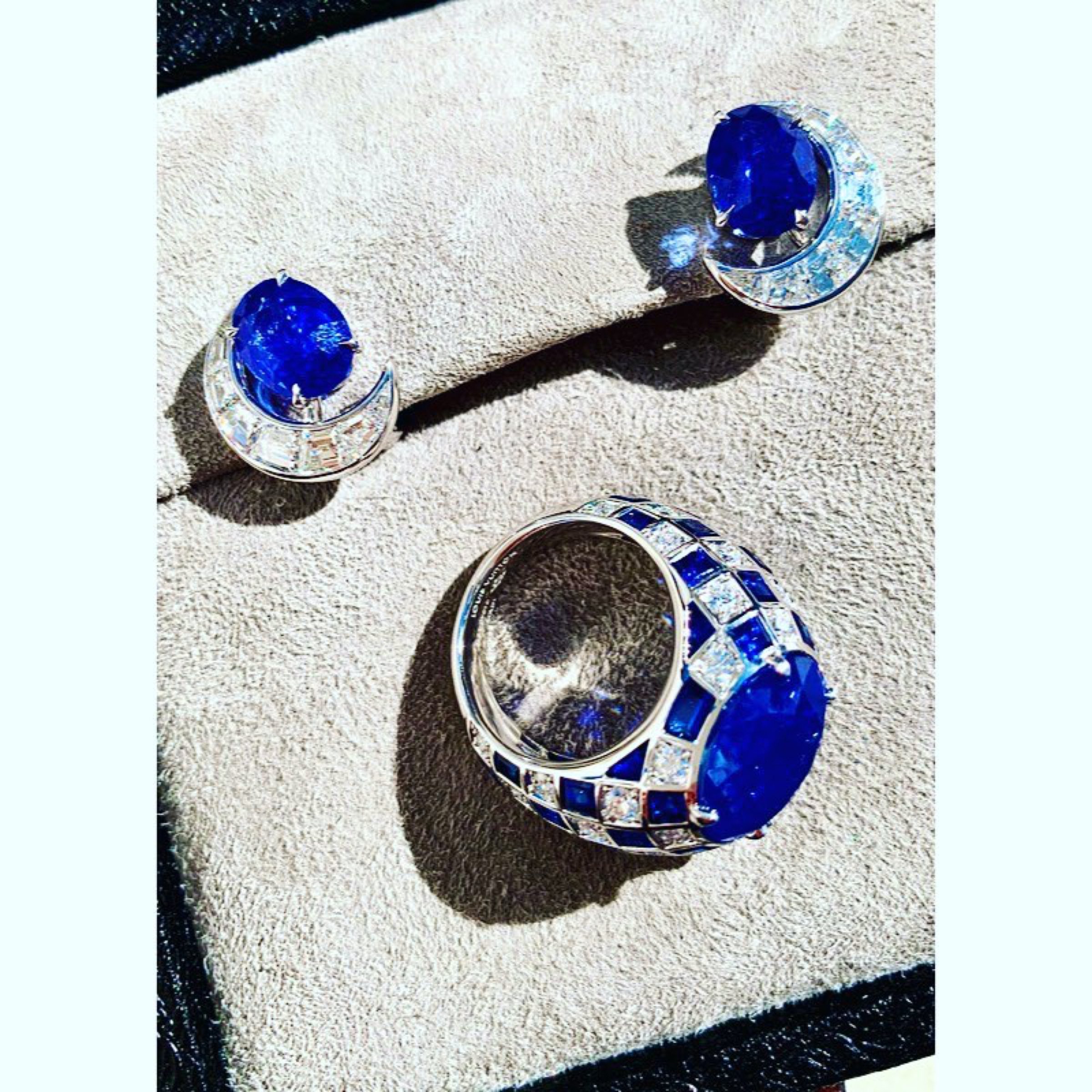 The star’s stylist Petra Flannery posted a detail shot of Reese’s Louis Vuitton jewels that showed all the specially cut gems in the design. Billy Porter made a striking fashion statement from his home in a custom off-white Ashi Studio pantsuit paired with several diamond jewels from Lorraine Schwartz. Sandra Oh wore a couple of jewels from W.Rosado’s new Pearl ID collection including the Love pendant and pearl and diamond earrings. Ozark star Julia Garner who won the Best Supporting Actress prize paired a cream Chanel dress with ropes of pearls and a diamond ribbon clip from Chanel as well as a hair clip from the fashion house.