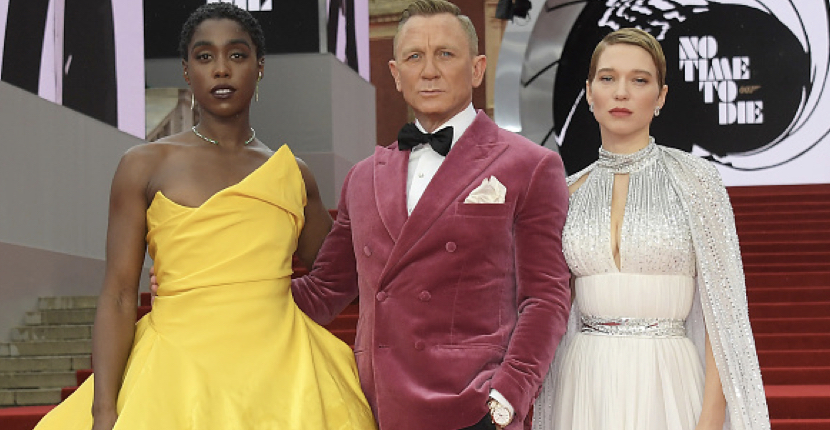 The stars of 'No Time to Die' Lashana Lynch in Ara Vartanian jewels, Daniel Craig and Lea Seydoux in jewels by Chopard Photo Getty

The Best Jewelry at the No Time to Die Premiere

Statement rings and royalty were all on the red carpet

September 28, 2021—We don’t usually cover movie premieres, but this is Bond, James Bond. Seriously, the No Time to Die red carpet just looked so super charged glamorous we couldn’t resist taking a closer look at the jewelry.

The overall trend interestingly was statement rings. I say it is interesting because the last few red carpets have been all about necklaces, if not big earrings. There were also a few other unexpected jewels.

First up naturally has to be the future Queen of England, aka Kate Middleton. I don’t think she has ever looked more glamorous at any event. Her Jenny Packham gown with the cape is regal.

But her earrings, well, what can I say? They are not exactly majestic. They coordinate with the gown and are costume. According to the Daily Mail, the earrings are by O’nitaa and cost around $393.

Considering her extensive jewelry box and access to some of the greatest jewels on the planet…well, the film might claim there Is No Time To Die, but it feels like she is trying to kill me.

It would have been amazing if she chose some diamonds, because you know “they are forever.” Lucky for us there were a lot of diamonds on the carpet and other gems.

Naomie Harris, who is always divine as the quick witted Miss Moneypenny, wore a stunning diamond and emerald headpiece by Ana Khouri.

Lashana Lynch, who is the first female 007 in the movie franchise’s history, wore an Ara Vartanian emerald and diamond choker and emerald Whip earring. She also had on a Shaun Leane Quill earring.

Detail of the Ara Vartanian Emerald and Black Diamond Double-Finger ring worn by Lashana Lynch. Note how her manicure is coordinated with the emerald.

French actress Lea Seydoux, who plays a Bond girl named Madeline Swann, wore delicate Chopard diamond Nuage earrings set with diamonds totaling 3.77-carats. The Swiss jeweler is an official partner of No Time To Die and featured in the film.

This detail photo of Léa Seydoux’s hand shows the Chopard butterfly ring she wore for the premiere. It is set with 14.5-carats of pear shaped diamonds in 18 karat white gold.

Ben Whishaw, who always steals every scene he appears in as the gadget guru Q, had on a couple of rings for the premiere.

Billie Eilish, who wrote theme song for the Bond movie, wore a delicate necklace and earrings to the premiere. I don’t know for sure but suspect they are by Gucci like her ensemble. They look like they are costume pieces.

Phoebe Waller-Bridge, who was one of the script writers for the film, wore diamond bands and small studs from Jessica McCormack.

British tennis player Emma Raducanu, who met with Kate Middleton recently, joined the stars on the red carpet and wore more diamonds than the Duchess. Her jewels are by Tiffany.

A detail of Emma Raducanu’s hands showing her Tiffany diamonds.

Daniel Craig, who is ending his long run as Bond with this film, proved he has learned a thing or two about posing in a partner’s accessories on the red carpet. In this case what I am referring to is his ability to show his Omega watch while wearing a suit. I can’t say I have ever seen a man do it so subtly. They are usually hidden underneath the sleeve. Well played Mr. Bond.

The Stylish Jewels Worn During Week 2 in Cannes