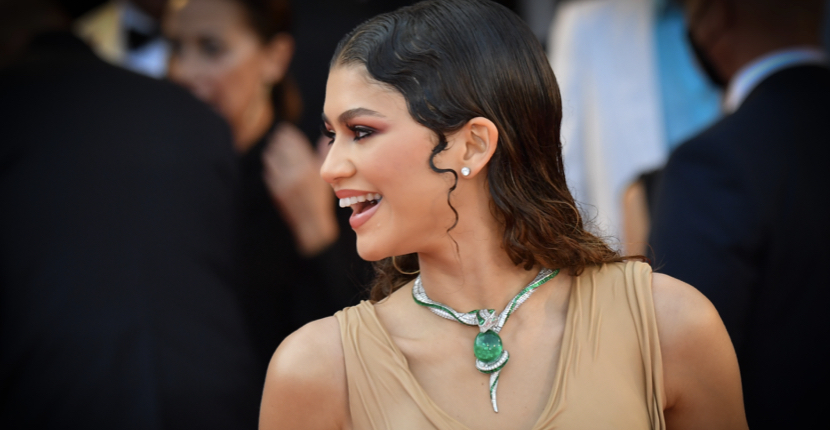 The Best Jewels in Venice So Far

September 4, 2021—The cool factor that covered the red carpet in Cannes is continuing to a certain degree with the best dressed at the Venice Film Festival. While we haven’t seen the radical styling of ear cuffs and two High Jewelry earrings hanging down from one lobe, which happened in Cannes repeatedly, there have been some jaw dropping moments and surprises in the form of vintage and independent labels.

There have also been bold designs from the big houses featuring signature motifs. Bulgari Serpentis slithered down the carpet a few times. And there was also a sighting of Cartier’s big cats. Naturally, I was delighted to see these creatures out in the wilds of the red carpet in Venice.

The best from the red carpet so far are in the round up below.

It would not be an exaggeration to say Zendaya broke the internet when she stepped out of her boat on the Grand Canal to the red carpet for the Dune screening in a “wet look” custom made Balmain leather gown and Bulgari’s Hypnotic Emerald Serpenti necklace centering on a 93.83-carat cabochon Colombian emerald.

The Bulgari jewel Zendaya wore also has over 26-carats of buff top emeralds and more than 50 carats of diamonds. It took over 1,800 hours to make.

Tiffany Haddish arrived on the red carpet for the screening of The Card Counter wearing a Christian Siriano gown and diamond encrusted and coordinated chain earrings, necklace and ring by Pomellato.

Kirsten Dunst, who has worn vintage jewels from Fred Leighton on the red carpet for many years, continued the tradition at the screening of The Power Of The Dog.

The 19th century citrine and gold earrings from Fred Leighton worn by Kirsten Dunst in Venice.

Kristen Stewart wore a Chanel diamond camellia necklace with a gown from the French label at the screening of Spencer.

Isabelle Huppert wore a Cartier panther choker and coordinated cuffs (not seen in the photo) at the screening of Madres Paralelas.

Mariacarla Boscono wore a Cartier necklace at the screening of Madres Paralelas.

Anna Cleveland wore a Bulgari Serpenti necklace at the screening for Dune.

At the Power of the Dog screening, Benedict Cumberbatch was joined by his wife Sophie Hunter who is wearing stunning earrings. We don’t know who the designer is but we would like to.

Jury member Sarah Gadon wore layers of Pomellato’s Nudo collection bracelets and rings at the screening for The Power Of The Dog.

The Best Jewels Worn at Cannes So Far

The Stylish Jewels Worn During Week 2 of Cannes