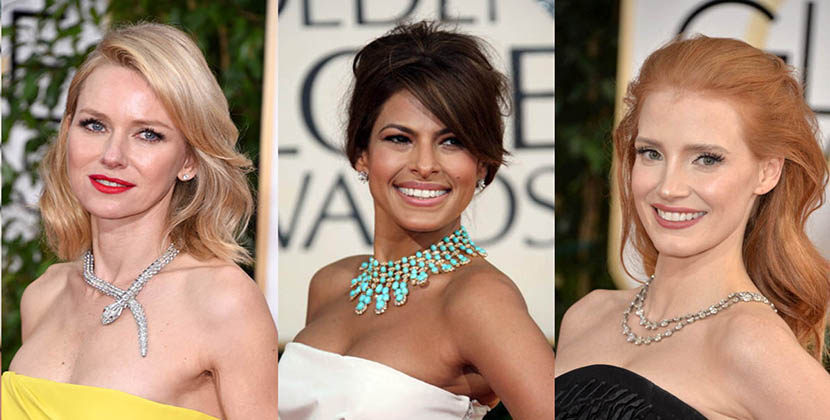 A look back at the empowering pieces worn over the years

The red carpet at the 75th Annual Golden Globes on Sunday night promises to be an empowering statement of glamour. All the women attending are wearing black to show solidarity with sexual misconduct victims. The fashion statement is being substantiated with the connection to the Times Up movement, a legal defense organization funded by over 300 women in Hollywood to help underrepresented women everywhere fight for legal rights, equal pay and to stop sexual harassment. Of course, the women in attendance will be talking about the issues which should bring some gravitas to the evening. I also strongly believe in the visual statement they are making. It will send a message and spread the word in an elegant and compelling way.

In advance of the historic red carpet, I have assembled a list of some of the most powerful statement necklaces worn at the Golden Globes ever. Follow me on Twitter @theadventurine on Sunday, January 7, 2018 for full red carpet coverage of the evening and the jewels. 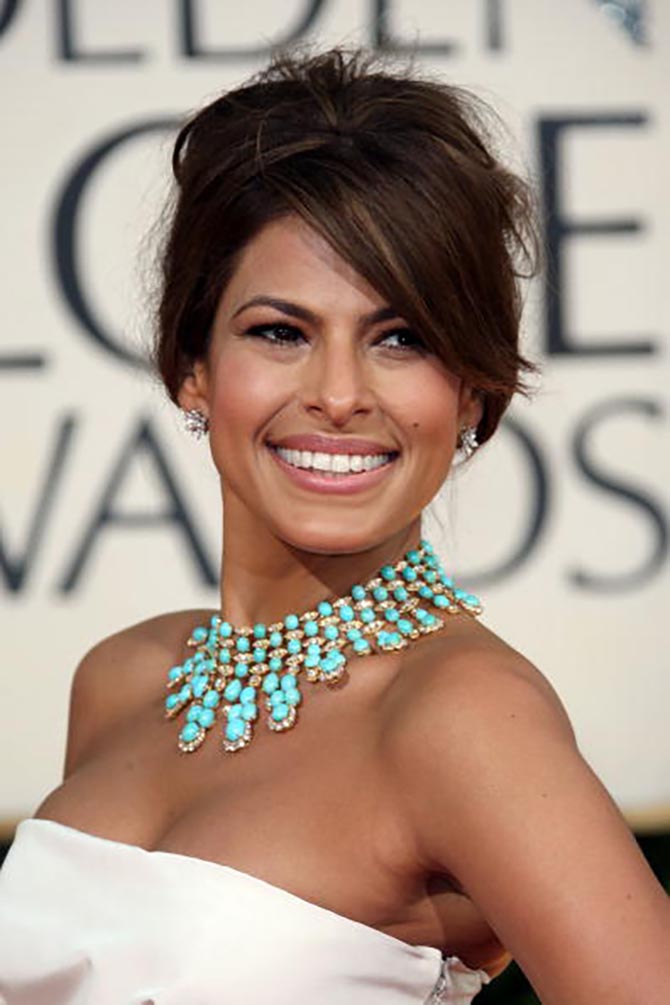 In 2009, Eva Mendes wore a Van Cleef & Arpels bib necklace from the French jeweler’s collection of historic pieces. It added a burst of color to her Dior white strapless dress. For some people, I am looking at you Stellene Volandes, this is as good as it has ever gotten at the Globes in terms of statement jewels. I certainly can’t disagree. The master jewelry stroke was put together by stylist Rachel Zoe in her heyday. 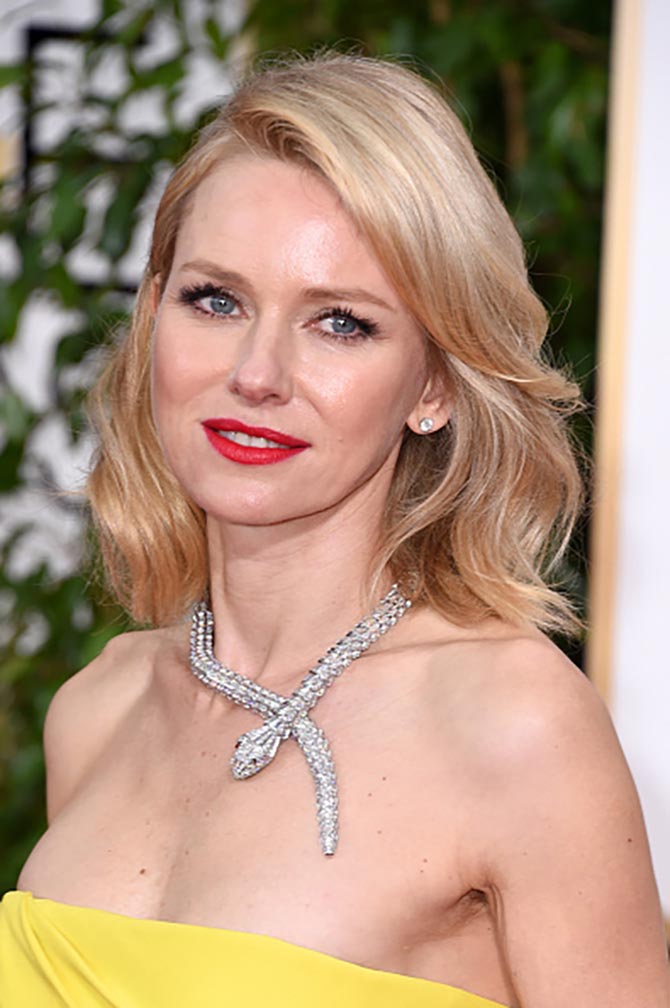 In 2015, much was made of the fact that Naomi Watts wore a Bulgari diamond Serpenti necklace she had donned several times before the Globes. I thought the repeat appearances made Watts look like she owned it. Owned in the sense that she tossed on the treasure featuring more than 77 carats of diamonds as easily as a pair of jeans. Her easy-breezy attitude with the masterwork paired with a sunshine yellow Gucci dress was the picture of modern Hollywood glamour. 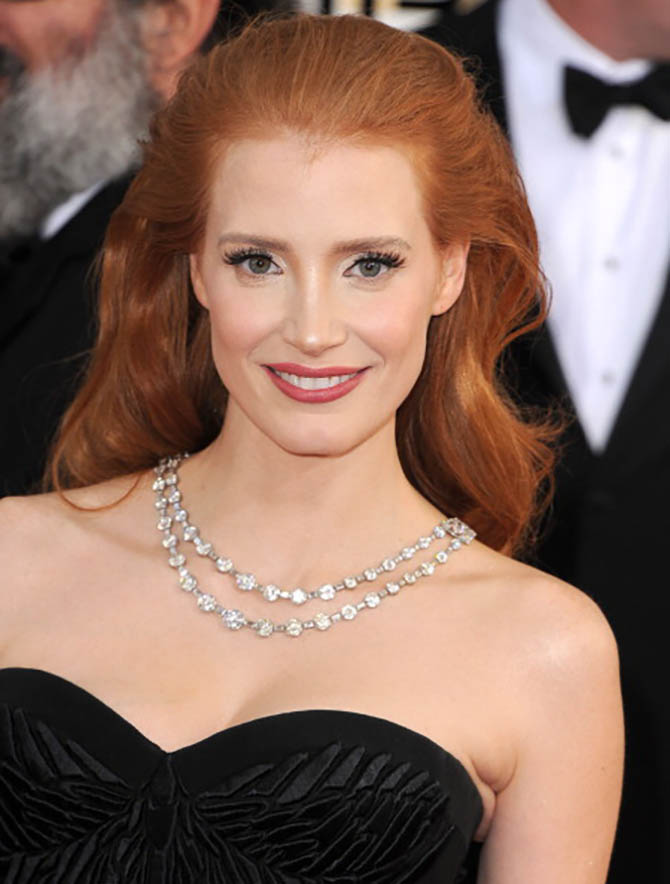 In 2014, Jessica Chastain wore a vintage platinum and diamond Bulgari necklace to the Globes with a strapless Givenchy gown. The piece is from the Italian jeweler’s archive collection. It is the 1930s jewel set with 137-carats of gems that Jennifer Aniston wore to the Oscars in 2006. The difference is how it was styled. Chastain turned around the necklace so it draped halfway down her back. 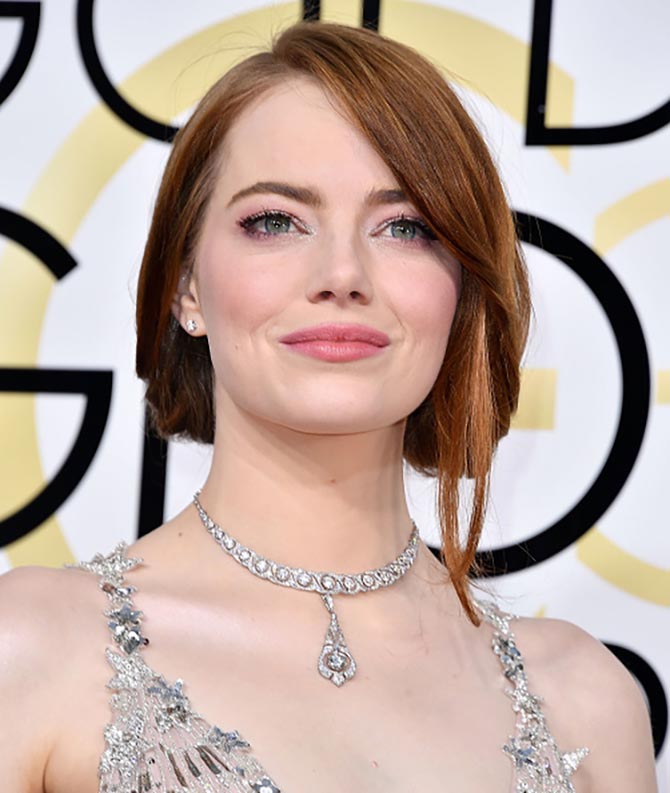 In 2017, Emma Stone sparkled in a vintage diamond and platinum necklace from Tiffany, made around 1909. She paired the piece with a dress covered in stars by Valentino that referenced the song “City of Stars” and one of the sweetest scenes in the her film La La Land. 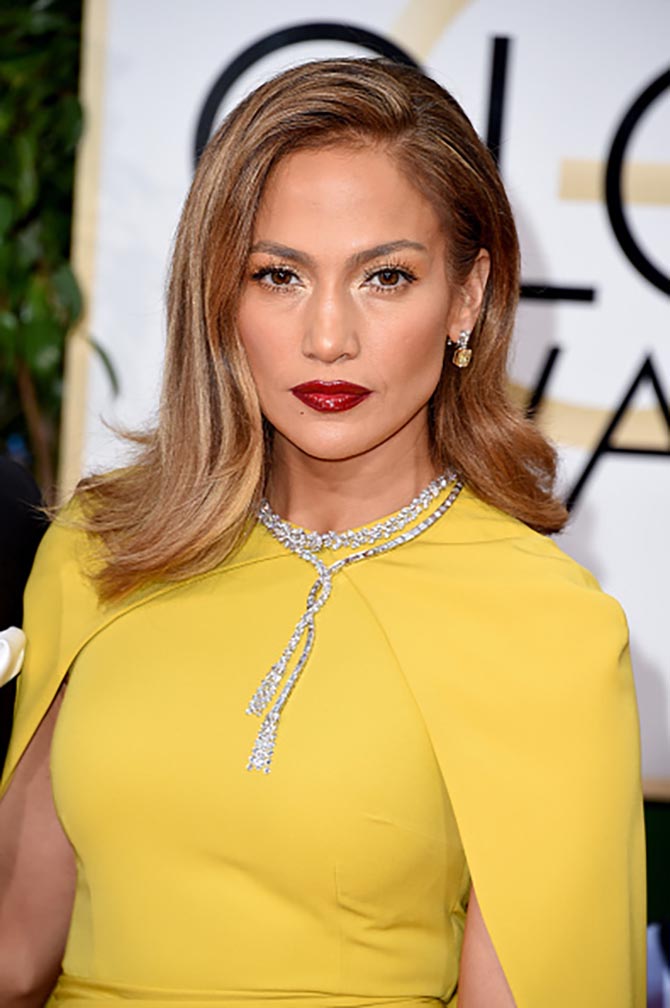 In 2016, Jennifer Lopez layered two incredible necklaces from Harry Winston. One was a cascading drop diamond necklace. The other was a classic holly wreath design. With the bracelet and earrings the star was wearing, it all added up to about 200-carats of diamonds. She paired the pieces with a caped Giambattista Valli yellow gown. 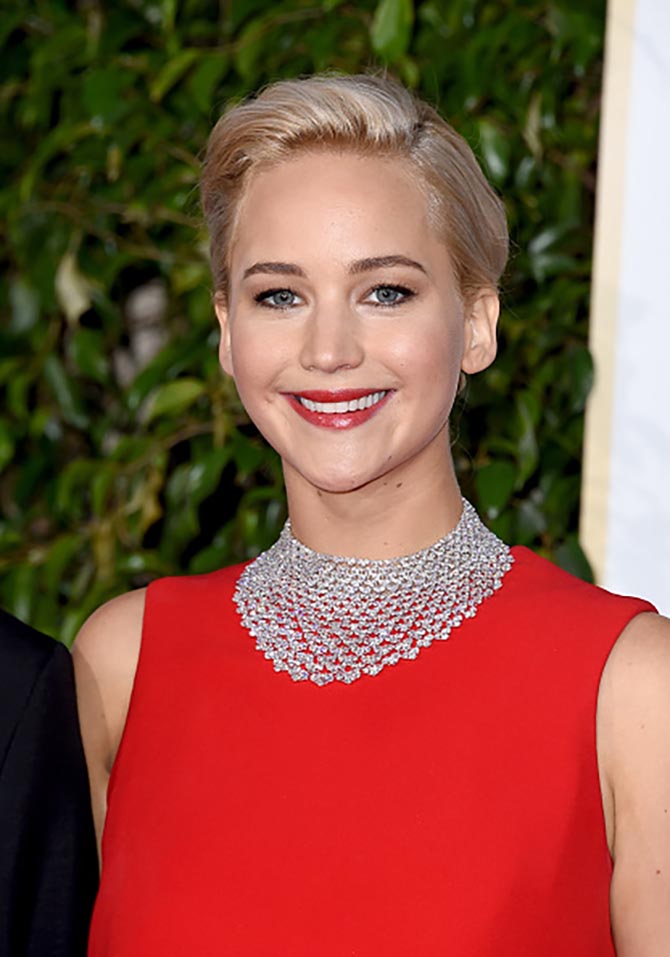 In 2016, Jennifer Lawrence wore one of Chopard’s signature mesh bib designs that have gone down the red carpet on any number of models and movies stars. She made the 156.77-carat jewel modern by mixing it with sleek Dior dress. 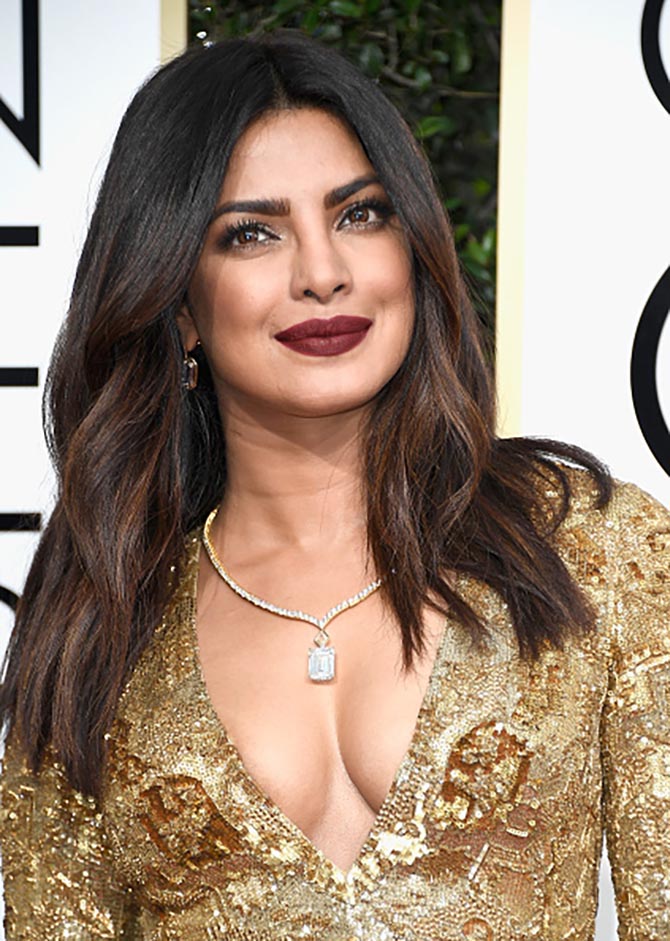 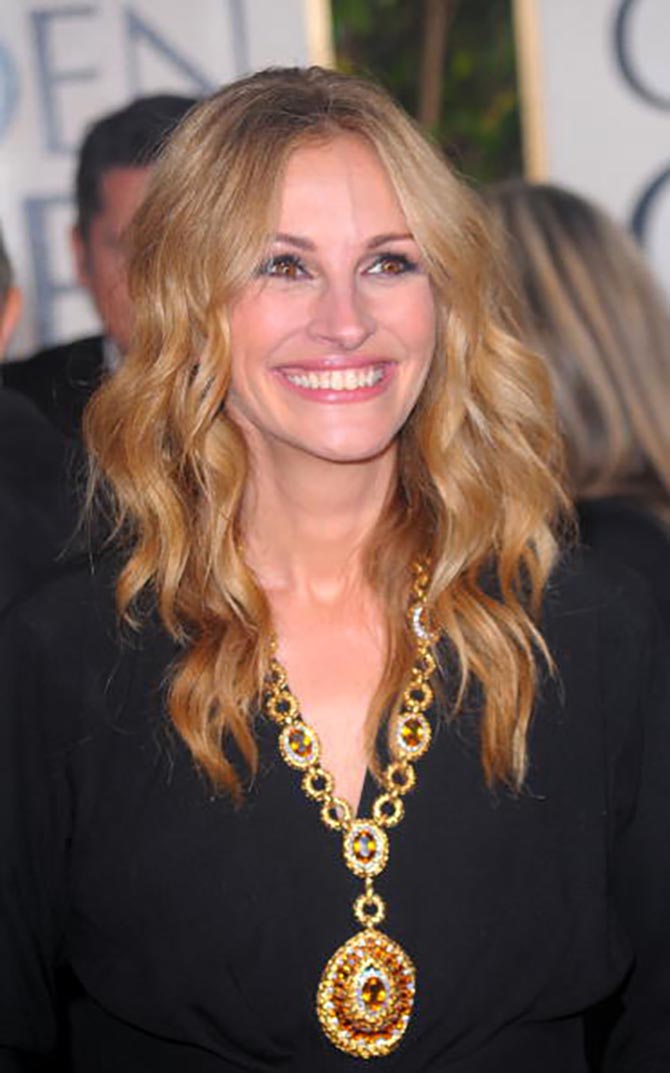 Julia Roberts is not known for wearing bold jewelry, but when she does it can be pretty great. In 2010, she lit up a black YSL dress with an epic vintage citrine and diamond necklace from Van Cleef & Arpels. 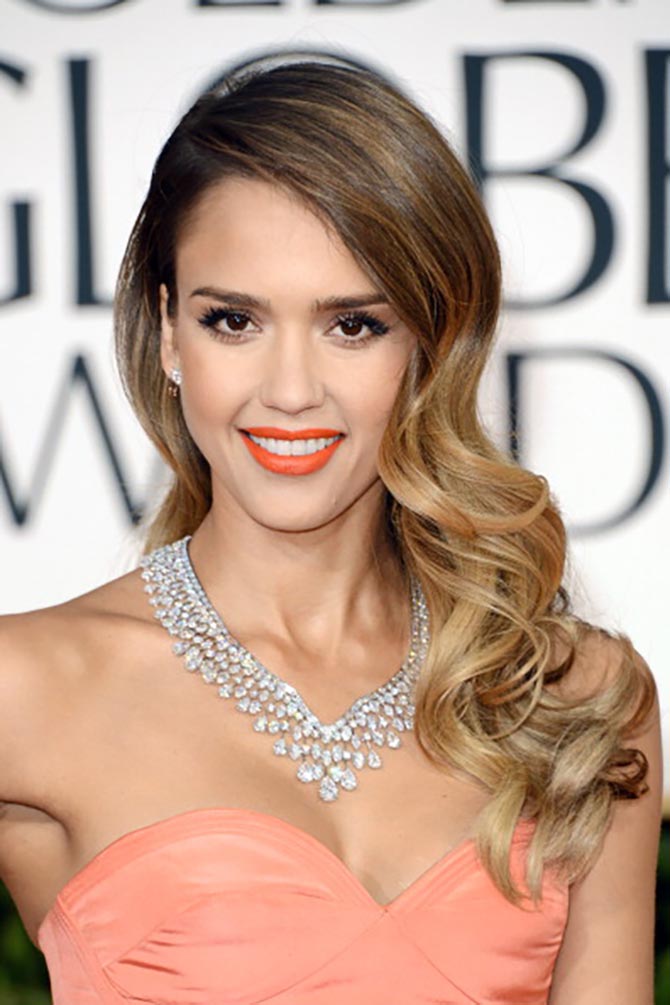 In 2013, Jessica Alba conjured up old-Hollywood glamour in a diamond and platinum necklace and a strapless peach Oscar de la Renta gown. The $5.8-million Harry Winston jewel was the type of treasure you would normally see at the Oscars or at very least on someone nominated at the Globes. Alba just chose to wear it. At the time, the coverage said the light reflecting from the stones almost blinded the photographers. 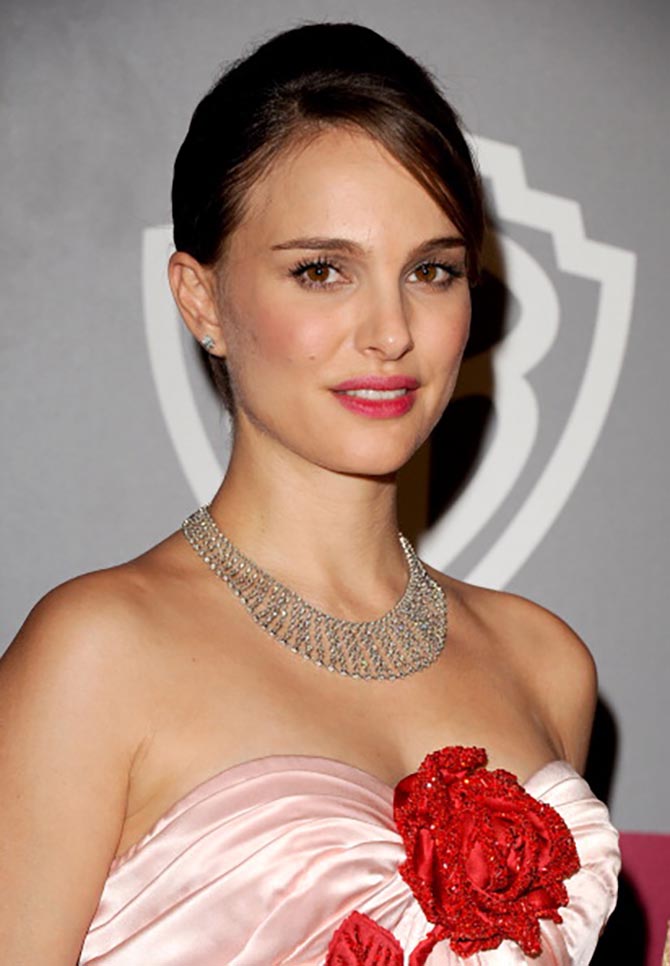 In 2011, a pregnant Natalie Portman paired a geometric diamond necklace from Tiffany with a pink and red dress by Victor & Rolf. The jewel added a touch of edge to the romantic gown. 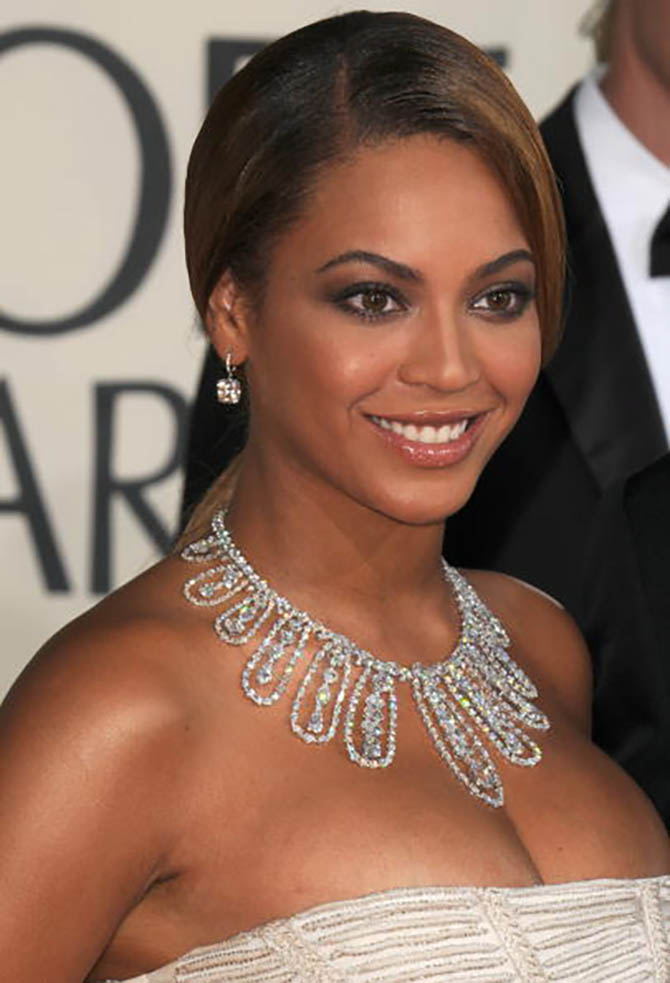 In 2009, Beyoncé chose a lyrical necklace by Lorraine Schwartz to highlight her Elie Saab gown. The loops on the diamond jewel were set with over 200-carats of diamonds. 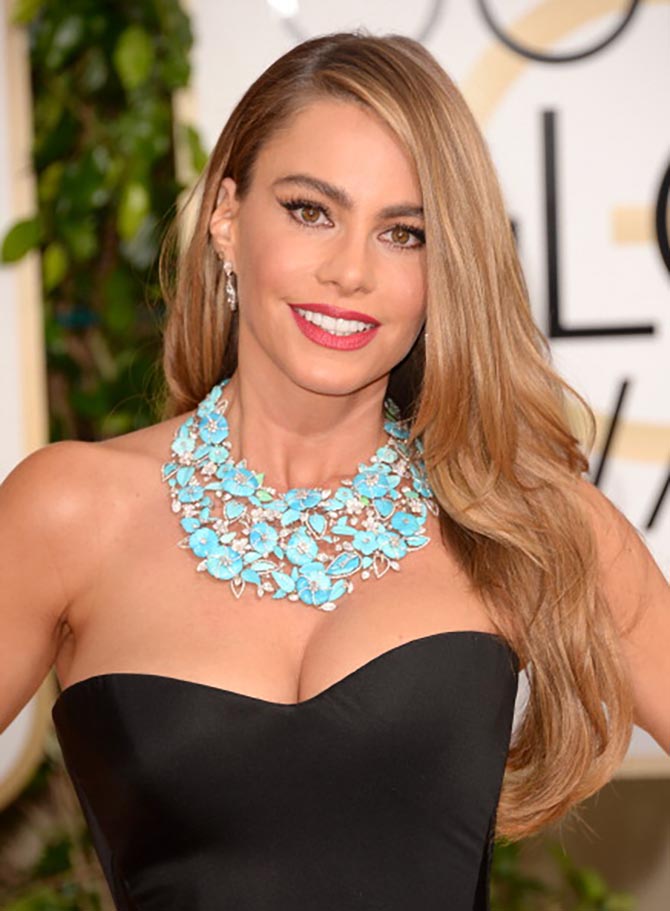 In 2014, Sofia Vergara wore an unforgettable necklace by Lorraine Schwartz set with a bouquet of carved turquoise flowers. The blue gems were highlighted with diamond petals in an openwork pattern. A classic black Zac Posen dress formed the perfect backdrop for the statement piece. 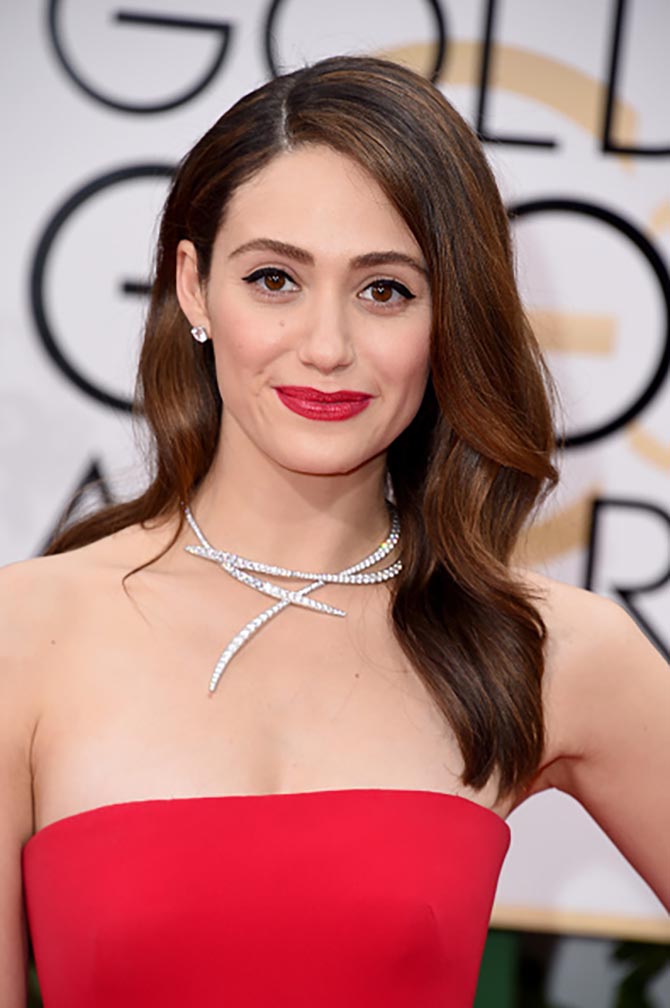 In 2016, Olivia Palermo stood out in a mid-length color block dress by Delpozo and a gold leaf necklace from David Webb. In 2009, Marisa Tomei paired a gorgeous blouse, belt and skirt from Oscar de la Renta with layers of long necklaces by Neil Lane. The sensational combination looked as vintage as it did modern. Michelle Williams in a velvet ribbon at the 2017 Golden Globe Awards. Photo by Steve Granitz/WireImage

In 2016, Michelle Williams proved, while priceless jewels are wonderful to see on the red carpet, a little imagination can also make a stylish statement. She accessorized her Louis Vuitton dress with an on-trend velvet choker tied in a simple bow. Her accessory choice could easily be had for just a few of dollars.