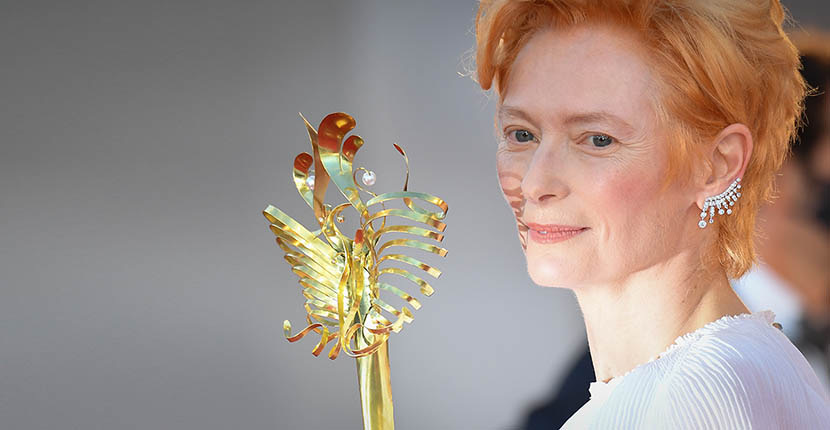 There were golden festival masks, elegant and edgy diamonds and emeralds

Tilda Swinton swept into the Venice Film Festival and immediately made a statement without speaking a word. She posed a few times for the press giving the Wakanda salute. It was a tribute to The Black Panther star Chadwick Boseman who passed away on Friday, August 28 after a four-year long battle with cancer. (It was apropos because Swinton was part of the Marvel Universe. She portrayed Doctor Strange in Avengers Endgame.)

Of course, we are here to cover the jewelry and when she made the gesture we couldn’t help but notice the emerald rings on her fingers. At least we believe they are emeralds. They could also be tourmalines. What is clear about the jewels is they are green gems, one is a pear-shape stone and one is an emerald-cut. Both are horizontally bezel set and totally divine. The stylish movie star coordinated the jewels with a citrus lemon color suit and a Kelly green suit from one of her favorite designers, Haider Ackermann. 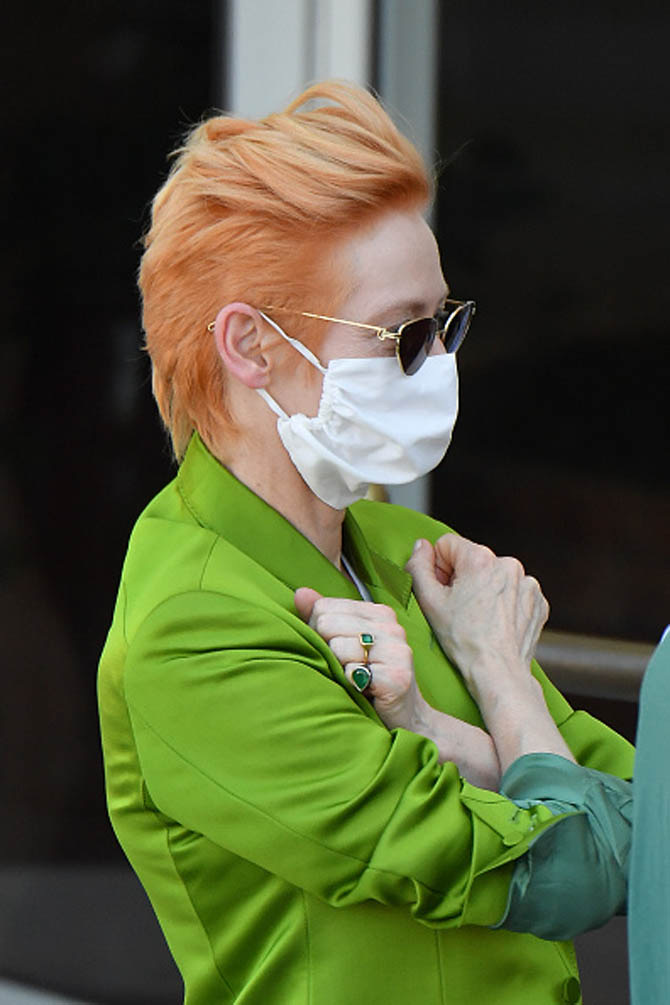 For the Opening Ceremony where she received the Golden Lion for Career Achievement, Swinton wore Chanel, another one of her go-to design Houses. She paired the black tiered skirt and white blouse with one diamond earring from Chanel’s new Tweed collection.

The pattern of the diamonds is intended to look like the fashion House’s signature fabric. It is part of a mismatched pair which might be avant garde enough for most people, but Swinton is an iconoclast and she only wore one. Swinton also wore a Plume ring from Chanel.

For her walk down the red carpet, the star took off her white face mask in exchange for a Venice Festival style of mask. The custom designed piece by James Merry was inspired by the artist’s “favorite fish sculptures on the columns of the Rialto Fish Market in Venice.” 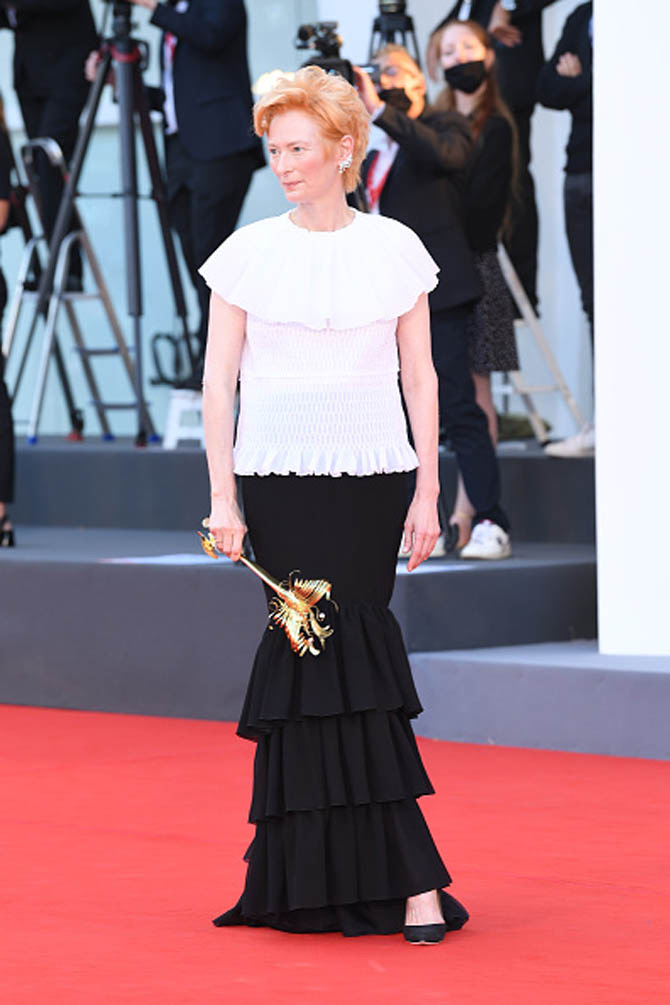 The mask, practically speaking, allowed Swinton to pose for photographers and make a symbolic statement about the importance of face coverings during the pandemic. It is also a fundraising item. The object is being donated to the to the RAD at Venice Auction taking place from September 23 to October 2 on the Chic Relief website. The proceeds benefit Facing History and UN Women, the UN entity for gender equality and women’s empowerment.

For the premiere of her short film The Human Voice, the Oscar winning actress wore a white Chanel coat dress and a Chanel Sous le Signe du Lion ring. We are not sure where the jewel comes from. She paired it with a second mask from James Merry that is also being donated to the cause. The artist said on his Instagram simply, “It was summoned from the lagoon for her.” 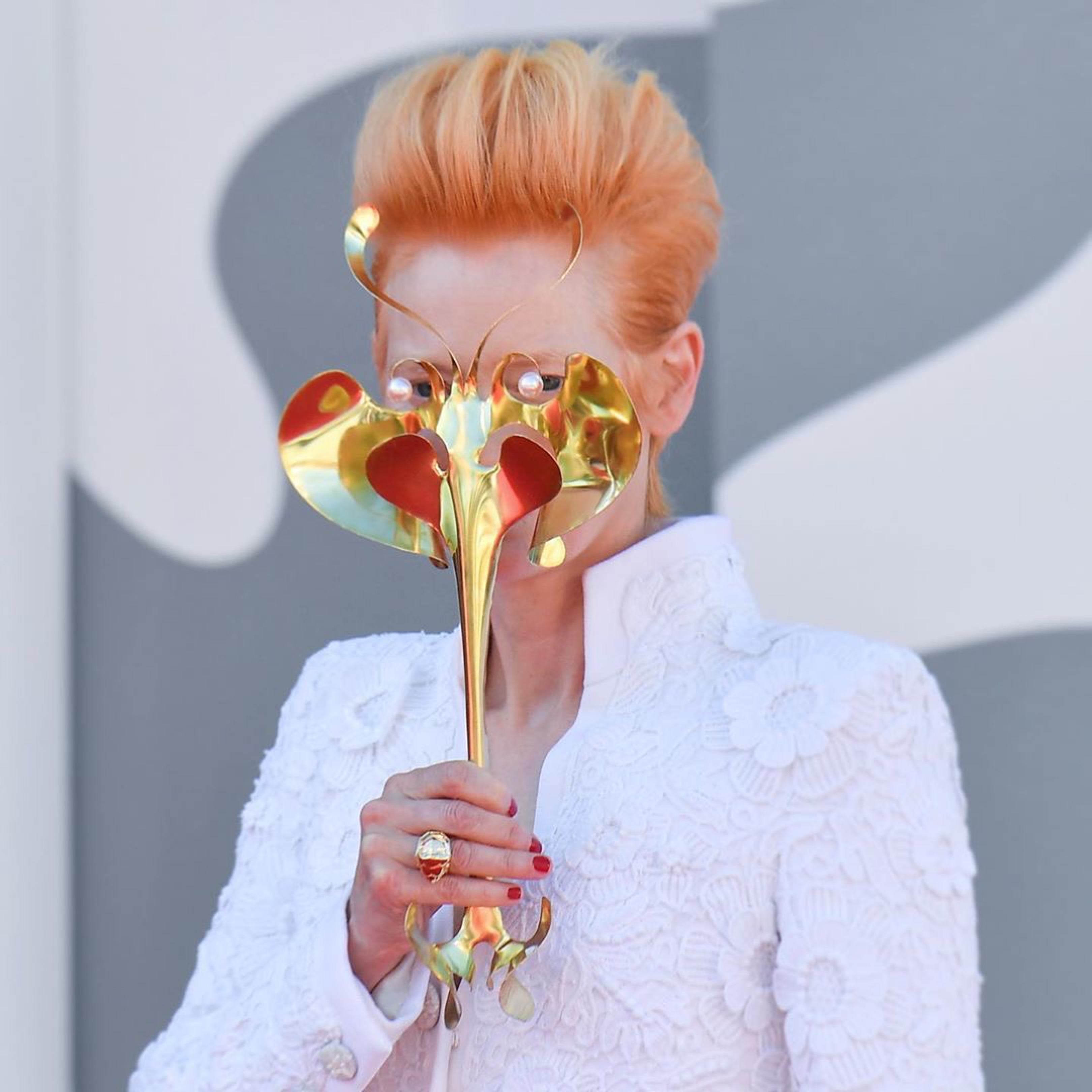 Swinton is always unforgettable in her appearances, but this turn at Venice was particularly memorable. When she accepted the Golden Lion for Career Achievement she acknowledged the entire film community. She said,

Cinema is my happy place, my true motherland. Its fellowship is my heart’s family tree. The names on the list of those awarded this honor, meanwhile, they are the names of my masters. They’re the elders of my tribe. The poets of the language I love above others.

She added at the end of her speech, “Viva Venezia. Cinema cinema cinema. Wakanda Forever. Nothing but love.”