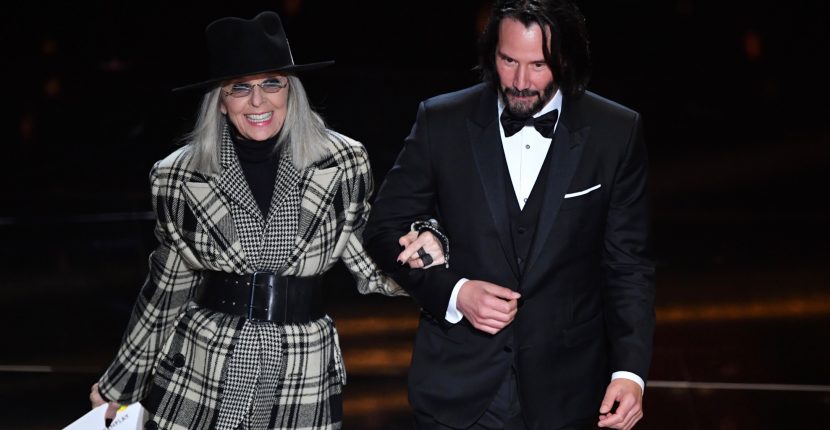 There were any number of unexpected moments

While there were no surprises in the acting categories at the Oscars this year, there were unexpected wins when the extraordinary film Parasite took home so many awards. In jewelry there were some wonderful baubles that seem to come from out of the blue and other things you might have missed. Check them out below. 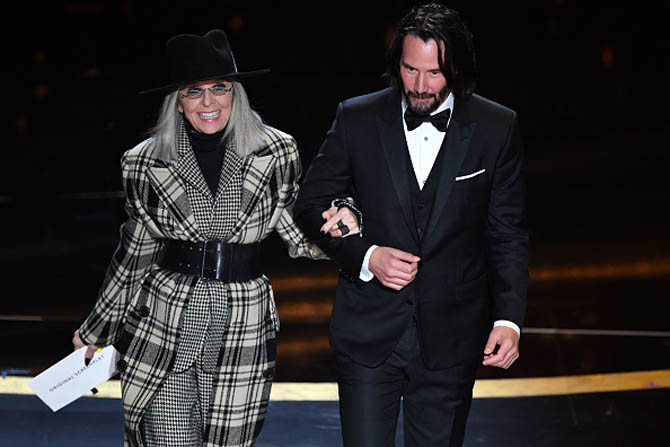 Diane Keaton is known and loved for her signature fashions not her jewelry. So it was jewelry joy to see her hand loaded up with rings by Los Angeles based jewelry designer Nancy Newberg when she walked on stage with Keanu Reeves. The jewels she had on her fingers include Nancy’s Oxidized Silver Thick and Thin Rope Bands, Black Ruthenium Daisy Bands and Black Ruthenium Bands. They coordinated perfectly with her ensemble and manicure not to mention the sparkle of Keanu’s vintage onyx, diamond and platinum dress set from Cartier. 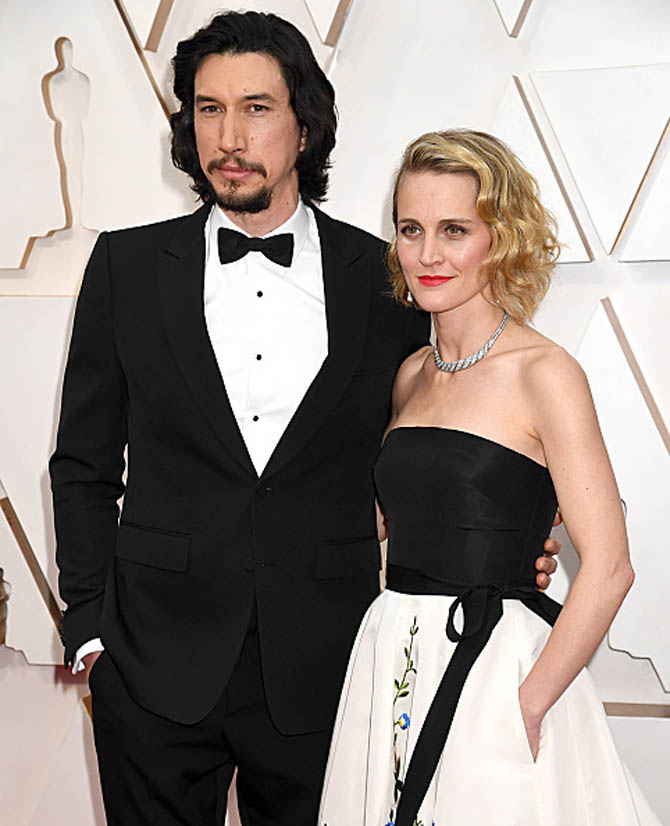 Joanne Tucker had on vintage Cartier from FD Gallery

Adam Driver’s incredibly chic wife, Joanne Tucker, became a jewelry one to watch when she walked the red carpet at the BAFTAs wearing earrings by SABBA from FD Gallery in New York City. For the Oscars, the actress returned to the chic boutique and borrowed a sensational Cartier Art Deco diamond and platinum necklace. 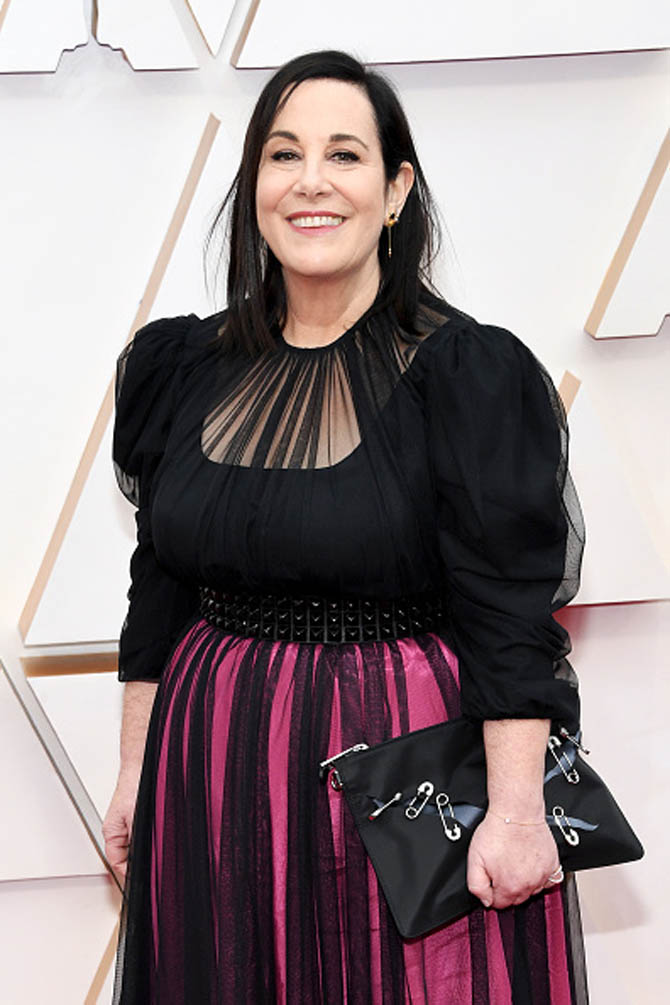 Arianne Phillips, the Oscar nominated costume designer for Once Upon A Time…in Hollywood, worked with Moschino’s Jeremy Scott to repurpose the dress she had worn in 2012 when she won the Academy Award for her work on Madonna’s film W.E. For her jewelry Arianne went to Los Angeles based designer Sarah Hendler. 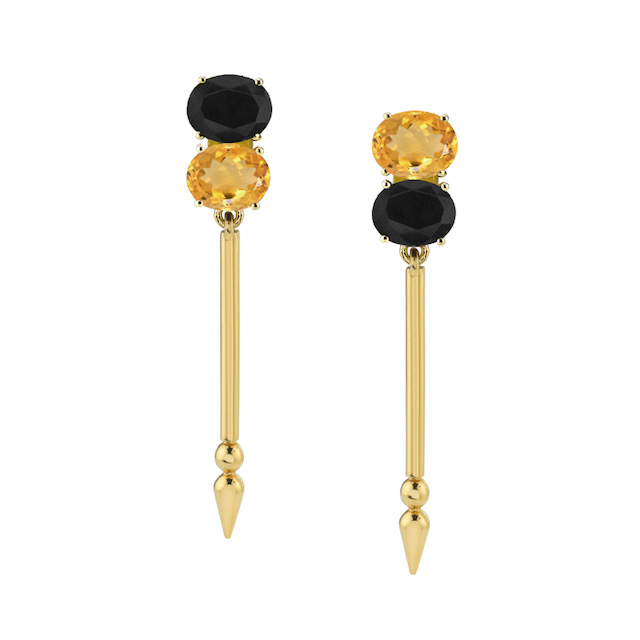 “Following Arianne’s theme of sustainability, I repurposed a style from my collection that she loves, Double Gemstone Shirley Spear,” explained Sarah. “I took existing pieces and made the stone combination she wanted with a simple chic all gold spear design.” The earrings were made in Downtown Los Angeles and are set with 11.10-carats of black spinels and citrines in gold. 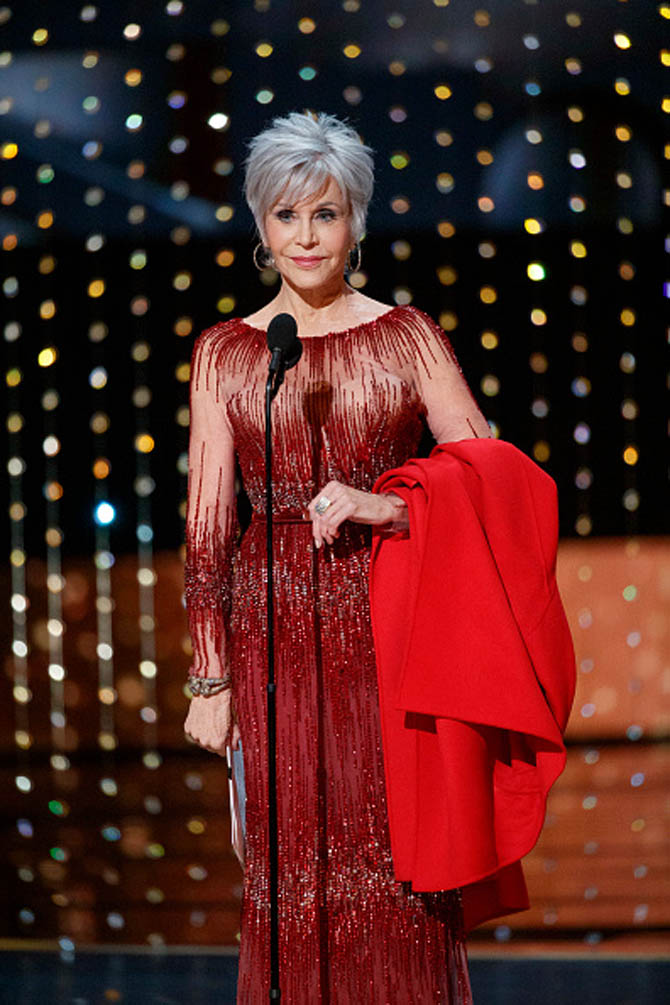 Jane Fonda, who presented the Best Picture Oscar to Parasite at the end of the night, made an activist statement with everything she wore. She carried her now famous red coat, that she said would be the last piece of clothing she ever buys as a symbol of the waste and damage to the environment fashion is causing. She re-wore an Elie Saab gown she debuted at the Cannes Film Festival in 2014. And she accessorized the look with jewelry from Pomellato. In an Instagram post the star explained she was wearing jewelry from the Italian firm because it, “only uses responsible, ethically harvested gold and sustainable diamonds.” 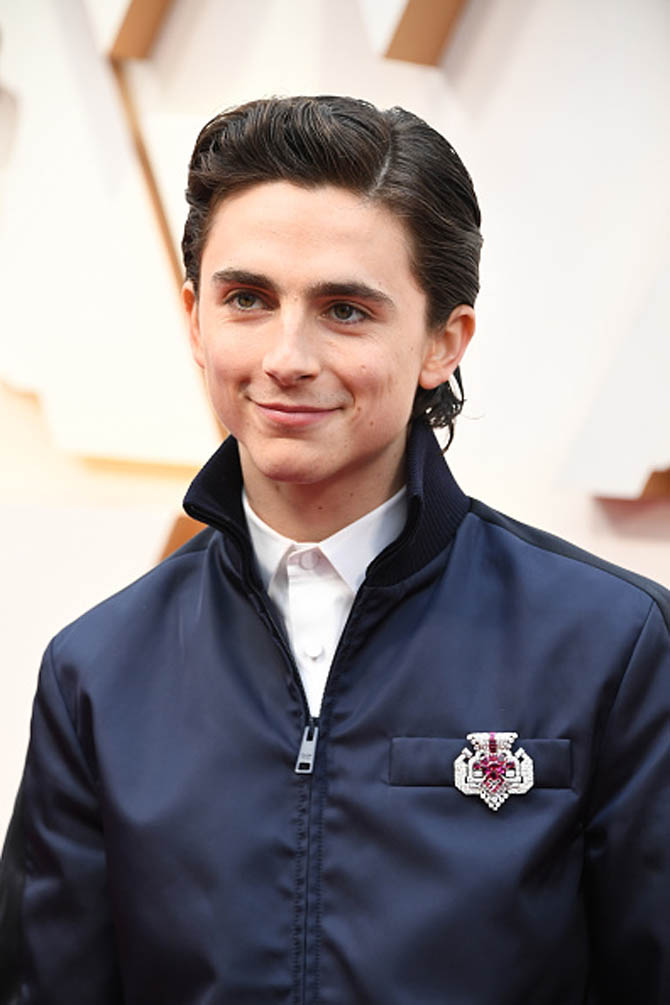 The fashion people may have been divided about the casual quality of Timothée Chalamet’s Prada ensemble (composed of a sustainable fabric) but the jewelry crowd absolutely loved his vintage Cartier brooch. The bold diamond and ruby jewel, that was made around 1955, came from the French jeweler’s Tradition Collection. 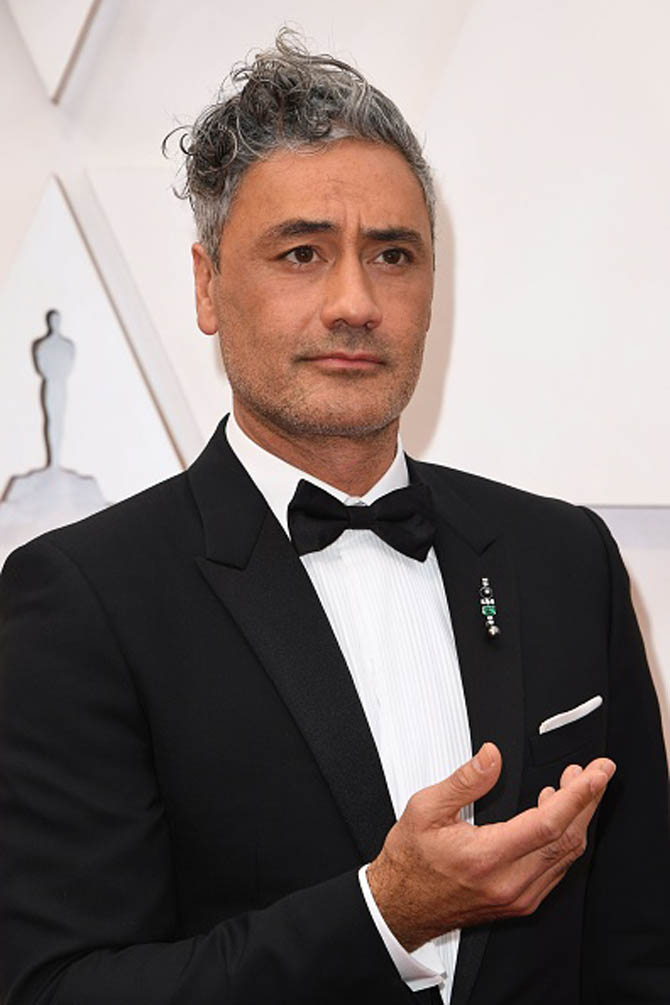 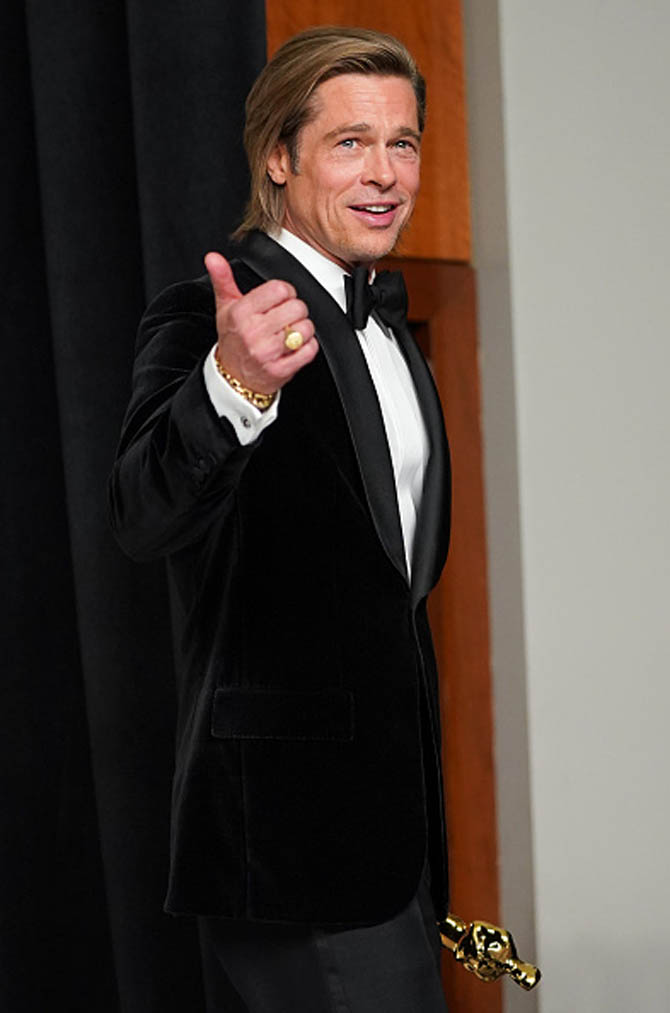 Brad Pitt loves jewelry and usually has a few layers of it tucked under his collar and shirt sleeves. One piece that has been more or less front and center all year is his David Yurman Petrvs Bee Signet 18K Gold Ring. He included the ring with his tuxedo and gold bracelet when he won the Best Actor prize for his role in Once Upon A Time…In Hollywood. 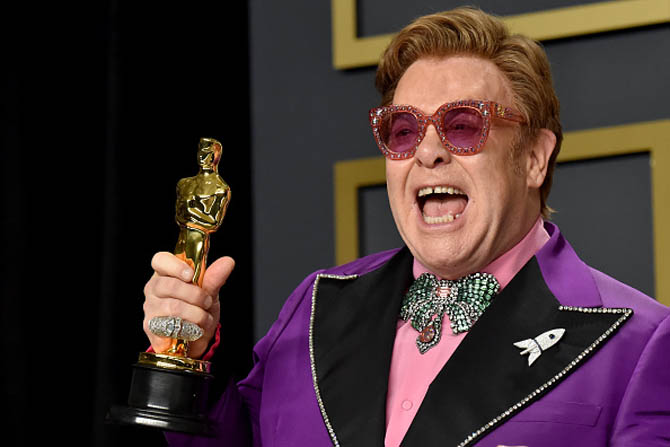 While other men are new to the jewelry game, Elton practically invented it in the modern era. He has long loved all kinds of jewelry. For the Oscars he wore a Gucci ensemble with a bejeweled bow, which I am pretty certain is a costume piece and part of the outfit. The brooch on his lapel, however,  is real gems. The bespoke jewel by London based designer Theo Fennell is composed of diamonds, sapphires and 18K gold. His ring looks like it might be from Loree Rodkin. 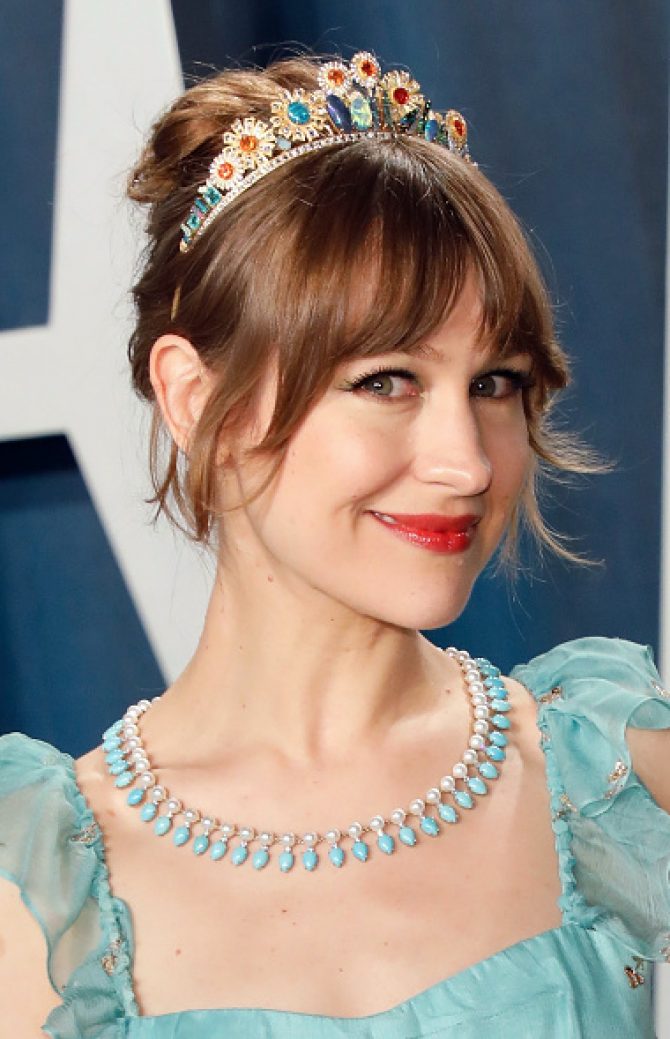 At the Vanity Fair Oscar party, among the sea of jewelry Joanna Newsom stood out in her Irene Neuwirth tiara. The Los Angeles based designer made the piece for Joanna to wear to her wedding to Andy Samberg in 2015. It is composed of black opals, fire opals and gold. For the event Joanna paired it with a turquoise and pearl necklace. For the Vanity Fair party, Emily Ratajkowski wore a bracelet by Ana Khouri

The Best Jewelry At The 2020 Oscars