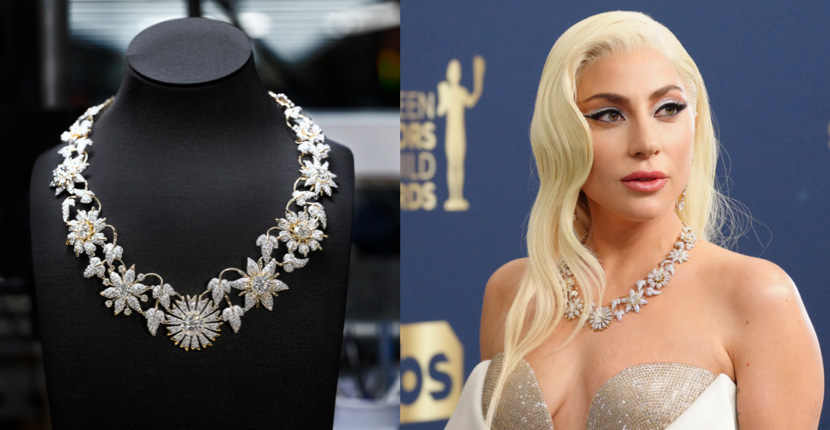 The Schlumberger for Tiffany Flowers and Leaves necklace worn by Lady Gaga at the 2022 SAG Awards. Photo courtesy and Getty

March 1, 2022—It’s unlikely Lady Gaga will ever top her jewelry high bar when she wore the 128.54-carat Tiffany Diamond to the 2019 Oscars. How could she? The gem is a national treasure. The Tiffany necklace she wore on Sunday night at the SAG Awards, however, is a solid number two on my list of Gaga’s best jewelry moments.

The Flowers and Leaves necklace comes from Tiffany’s 2022 Blue Book collection. It was originally designed by Jean Schlumberger in 1958. Tiffany has continuously made Schlumberger designs from his vast archive of drawings since he retired from the firm in the late 1970s. (Schlumberger died in 1987.)

Who is Jean Schlumberger?

A French designer from an illustrious family of textile merchants, he formally began his jewelry career in 1936 when Elsa Schiaparelli hired him to make costume pieces in the themes of her surrealist fashion collections. During this time, Schlumberger began to dabble in fine jewelry, creating things for his circle of society friends. After serving with the Free French Forces during World War II, he relocated from Paris to New York and opened a fine jewelry boutique to sell his collection of nature and Renaissance inspired designs on the Upper Eastside.

When Tiffany hired Schlumberger in 1956 as a byline designer, his collection caused a sensation on a grand scale. Jackie Kennedy and Elizabeth Taylor were among his most high-profile fans. The legendary fashion editor Diana Vreeland frequently sung Schlumberger’s praises. She once wrote, “It’s not at all subtle. A Schlumberger lights up a whole room!”

The Flowers and Leaves necklace Lady Gaga wore did just that. It has many of the designer’s signature qualities.

“I want to capture the irregularity of the universe,” Schlumberger once said. For Flowers and Leaves, he did this by making each bloom on the necklace unique.

Like all of Schlumberger’s jewels the necklace is very sculptural. It was the opposite of the comparatively flat and conventional gemstone necklaces so many designers made during the mid-20th century.

While most designer’s working during Schlumberger’s heyday used platinum exclusively in High Jewelry, he combined platinum and gold with the dexterity of an artist. Gold tendrils often weave through a design adding movement and the organic quality he sought.

Schlumberger usually used an array of colorful gems in his jewels, but on occasion he did work exclusively with diamonds like in the Flowers and Leaves necklace.

It is composed of 14 round primary or larger stones weighing a total of 32.45-carats. There are 1,045 smaller round brilliants in the jewel adding up to 30.98-carats.

Schlumberger’s Flowers and Leaves is a lyrical statement in the art of jewelry. It was the perfect piece for Lady Gaga to wear to the SAG Awards to celebrate her Best Actress nomination for House of Gucci.

The Schlumberger Exhibit Goes Behind The Scenes