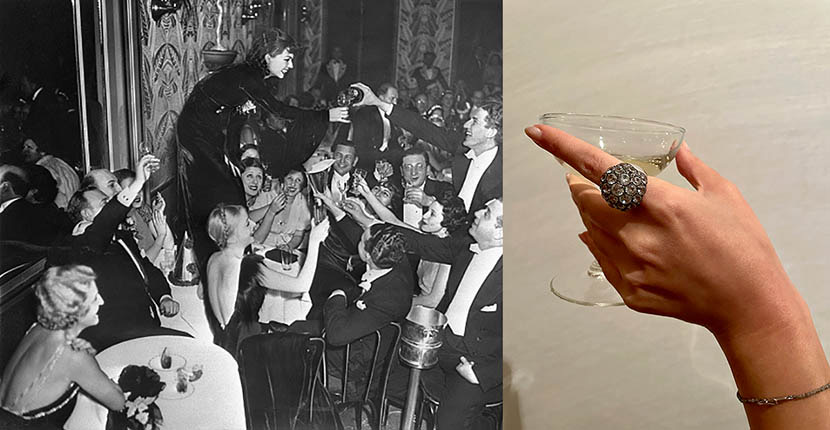 December 31, 2020—I spend a lot of time studying vintage jewelry and indulging in flights of fancy about who owned a certain piece or where it was worn. Once in a while a piece inspires a story so quickly that I don’t think I’ve made it but rather channeled it.

That’s what happened when I stumbled on this Boivin ring on Instagram. I suddenly felt certain that the piece had been worn by a forty-something fashion columnist or maybe a singer at a New Year’s Eve fête that had started in a penthouse apartment on Sutton Place and ended at Times Square where the owner watched the 1935 Ball drop and got a little drunk on too much champagne.

Maybe my fantasy was born out of my impatience to watch this New Year’s Eve Ball drop and usher in a new year. This old one has really worn out its welcome! And even though most of us will be home and not partying with any or many friends or loved ones, I think it’s never been more important to buy the best bubbly you can afford, dress up and ring in the new year like you’ve never rung one in before. 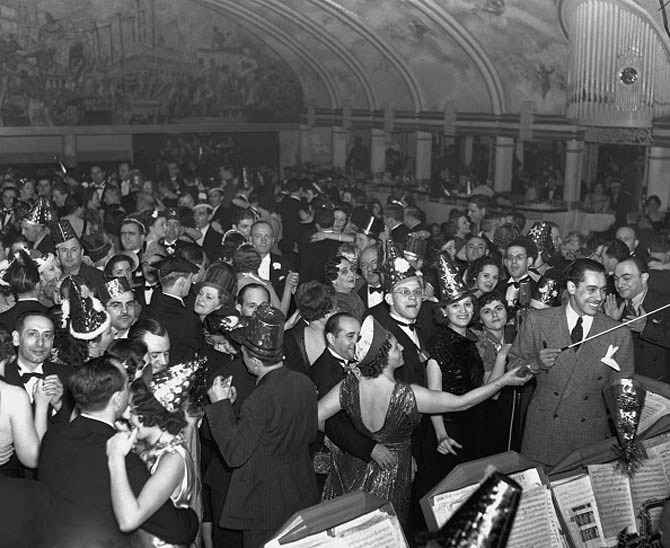 Bandleader and singer Cab Calloway leads an orchestra during a New Year’s Ball at the Cotton Club in New York, 1937 Photo Getty

I can’t imagine a more perfect piece of jewelry to do that with than this zircon ball designed by René Boivin currently at Simon Teakle’s gallery in Greenwich Connecticut. I asked Teakle, who is a gemologist, and ran the jewelry department at Christie’s for almost twenty years, about this particular piece.

“Along with Suzanne Belperron and Juliette Moutard, Madame Boivin was unapologetic in an unconventional approach and strived for an independent and feminine style,” he explained. “This very chic ring made circa 1935 is the perfect example, using zircons and mounted in silver, the honeycomb design is a fabulous departure from the traditional pavé technique. Boivin repeated this style with different metals and stones. The combination in this ring allows the collector to own a classic Boivin jewel without breaking the bank.” 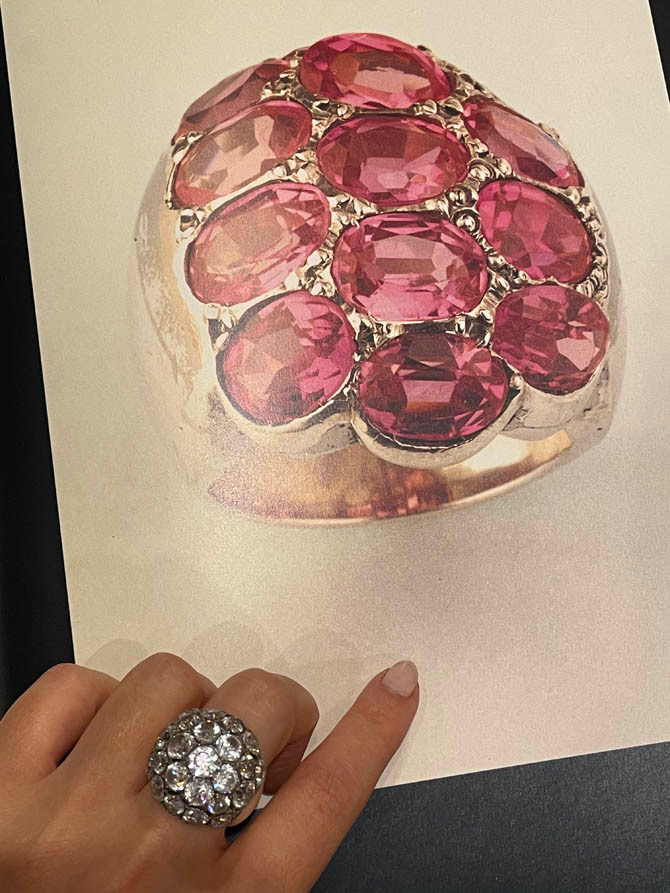 Detail of the Boivin ring and image of a similar gem-set style. Photo Christine Cheng of Simon Teakle

From a jewelry perspective there’s something especially apt to me in choosing a vintage ball ring to honor the Ball that is going to drop-in Times Square at midnight. The tradition goes back to 1907 when the first Ball descended from a flagpole at One Times Square much to the delight of revelers gathered below in the cold night.

Unlike today’s 12 foot, 11,875-pound Ball made of 2,688 Waterford Crystal triangles and 32,256 Philips Luxeon LEDs, the first was only 5-feet in diameter, weighed 700 pounds and was electrified by a mere one hundred 25-watt light bulbs.

It was built of wood and iron by an immigrant metalworker, appropriately named Jacob Starr whose company Artkraft Strauss, continued lowering a ball each New Year for most of the 20th century. The Ball dropped was paused during the war years of 1942 and 1943 because of “dim-outs” of lights in New York City. At midnight those two years, celebrants listened to bells chiming, ringing out the old year, and ringing in a new one in a most literal way. 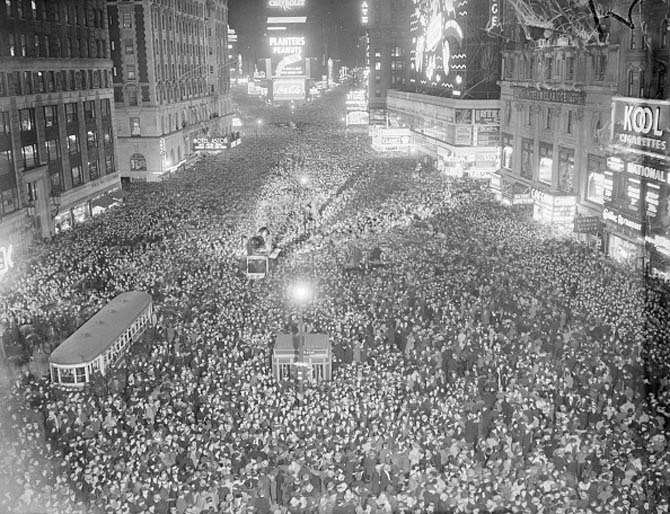 The original caption from this 1937 photo reads, “As the clocks were tolling the hour of twelve on New Year’s Eve, this scene was snapped in Times Square, New York. It seemed as if everybody in New York flocked to the neighborhood, with horns, cowbells and all manner of noise makers.” Photo Getty

The New Year’s Eve Times Square Ball continued to be updated over the decades. The 1955 version was made of aluminum and weighed only 150 pounds. The 1980 iteration was lit up with red bulbs and a green stem and became an “I Love New York” apple for the next eight years.  The current Ball was created in 2007 on the 100th anniversary of the Ball Drop tradition.

The custom of dropping a ball to signal the passage of time dates back to 1833 when a “time-ball” was installed atop England’s Royal Observatory at Greenwich. This one dropped at one o’clock every afternoon to help captains of nearby ships keep their chronometers set precisely. Today there is a drop just like that one at the United States Naval Observatory in Washington, D.C.

But no Ball drop is more famous than New York’s Times Square extravaganza which is watched by over 1 billion people worldwide. And this year, one celebrant might just be lucky enough to wear this Boivin to help ring in what will be a most welcome New Year, I wish it could be me.

M.J. Rose is a New York Times bestselling author; her most recent novel, Cartier’s Hope, (Jan 28th, 2020) has been called “A bold, satisfying tapestry. Smart, fierce, lovely, and intricate,” Kirkus (Starred Review). Her next novel, The Last Tiara will be released February 2, 2021.