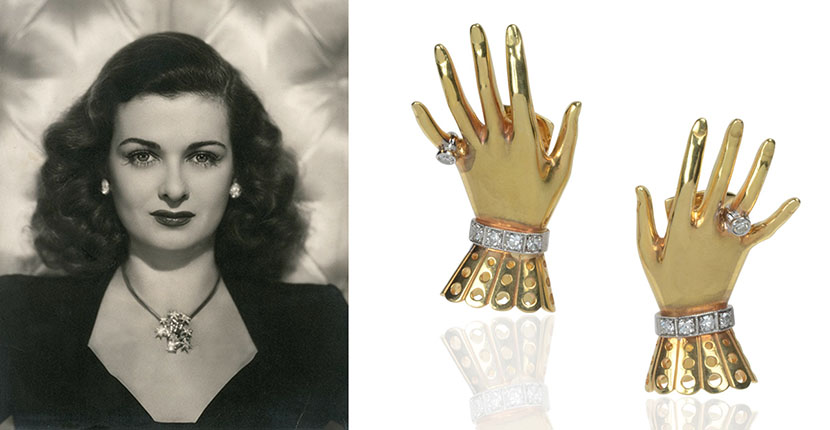 The gestures in these jewels signify glamour, astrology, eternality and more 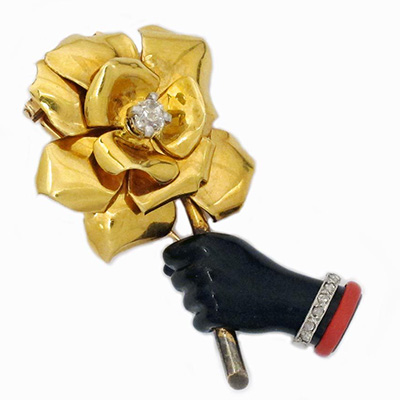 For the last several years the hamsa has had a stronghold on the hand trend in jewelry. Before the hamsa renaissance, however, different types of hand jewels were popular—ones that had no use as amulets, but were just purely elegant. When I took a tour of the Hancock’s boutique in London and saw a pair of glam vintage Paul Flato hand earclips, I got very interested in the history of the expressive style.

Jewelry in the shape of hands first became fashionable during the 1830s and 1840s, when they appeared as gloved hands on clasps of gold necklaces. Unlike the ancient hamsa charms worn as defense against the evil eye, these jewels did not depict the palm and didn’t symbolize anything specific. Instead, they were modeled after elegantly posed hands, decorated with bejeweled cuffs, and topped with gemstone rings. They were often attached to long gold chains, adding a playful touch to a basic jewel.

During the Victorian era, hand jewels were carved from delicate materials like ivory and coral, decorated with cuffs and accented with gold and gemstones. These hands, could carry as much symbolic significance as the hamsa.  They often held allegorical objects such as wreaths, which would have indicated memorialization, or snakes which stood for eternality. 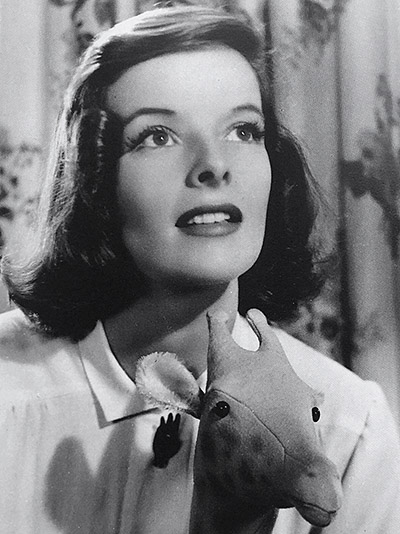 During the 20th century, Cartier and American jeweler Paul Flato were among those who grabbed on to the hand concept inspired by Surrealist hand motifs among other cultural cues. Cartier created a series of brooches around the late 1930s with either coral or onyx hands clutching a gold or oynx rose.  Diamond and gold bracelets decorated the wrist. The exact meaning of the motif is slightly mysterious. Author Nadine Coleno in her book Amazing Cartier (2009) cites everything from the rose in the castle in the novel Beauty and the Beast to the flower in the hand of Mogul emperors alluding to their legendary gardens.

Paul Flato first introduced his hand-shaped jewelry designs in the 1930s and he quickly became renowned for them. He created sign language initial clips in every single letter of the alphabet. Clients purchased custom pairs to represent their initials (or whoever else’s initials they wanted to wear).  Katherine Hepburn sported a W sign language initial clip brooch from Flato in the 1938 screwball comedy Holiday. The letter was the first initial of her mother’s maiden name in the film. Anita Loos, author of the novel and screenplay for Gentlemen Prefer Blondes, had A and L Sign Language Clips by Flato in her jewelry collection. 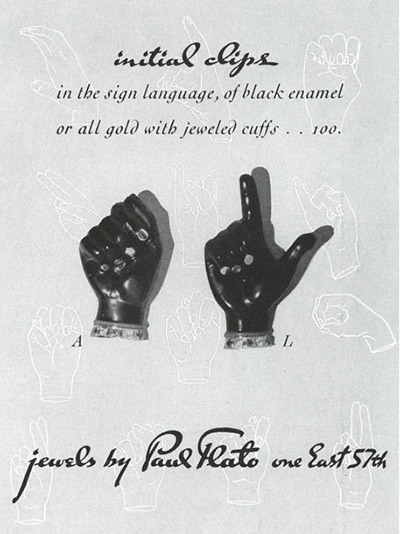 The A and L sign gestures, illustrated in a 1938 Paul Flato advertisement were created for Anita Loos

Inspired by astrology, Flato designed a ‘Hand of God’ brooch which depicted a gold palm surrounded by stars pavéd with diamonds. It is the hand design he made that is closest in relation to the ancient hamsa symbol, though it still possesses the elegant, longer fingers. Actress Joan Bennett loved her Flato ‘Hand of God’ brooch so much, she wore it as a pendant on a necklace in several publicity photos (see one at top on the left).

Another one of Flato’s play on the hand jewels did not represent specific letters of sign language and were not symbolic in any way, but they still said plenty through the way in which they were posed. The elegant pair of hand ear clips like the ones I spotted at Hancock’s (seen in the photo at top on right), for example, is topped with long fingernails, cuffs trimmed with diamonds, and large single-cut diamond ‘rings.’ The hands of each clip are spread in a graceful gesture, and they look like the type of manicured fingers that would naturally grasp a bejeweled cigarette holder in one hand while reaching for a champagne coupe with the other. 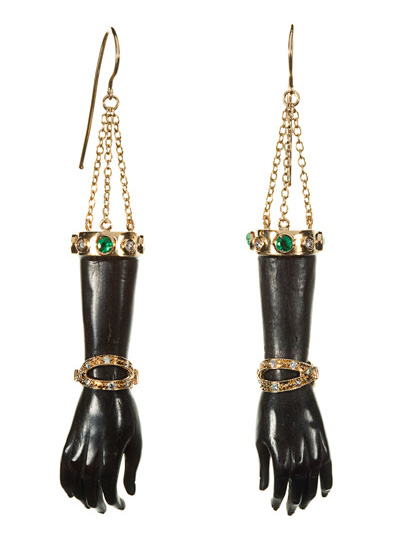 The designer, however, was inspired by a motif rich in history and symbolism. Majestic blackamoors were the muse behind Rosado’s Urban Prince collection. In researching the jewels Wilfredo noticed that very few blackamoors are depicted with arms or hands, so he chose to create pieces depicting only those body parts.

Wilfredo doesn’t attach particular symbolism to hand jewelry, as was done during the Victorian era, but he is fascinated by people’s hands. He explained, “I think hands can convey so much. I always make it a point to observe people’s hands. It’s become sort of an obsession. I remember taking notice of Andy Warhol’s hands when I worked with him. I loved to watch him draw. His hands were very strong in appearance but soft in how he executed his work. Hands can be very communicative, sometimes they are elegant and delicate, other times hard and strong. Hands are such an important part of our body language and I find it interesting to have them ‘freeze-framed’ in a piece of jewelry, where a message can be left to interpretation.”

While the hamsa, Flato’s sign languge clips and ‘Hand of God’ clearly come with sources of inspiration the elegance of most hands in jewelry over time seem to be inspired by the same type of elegance Wilfredo describes, the beauty of a gesture.  Pure glamour.