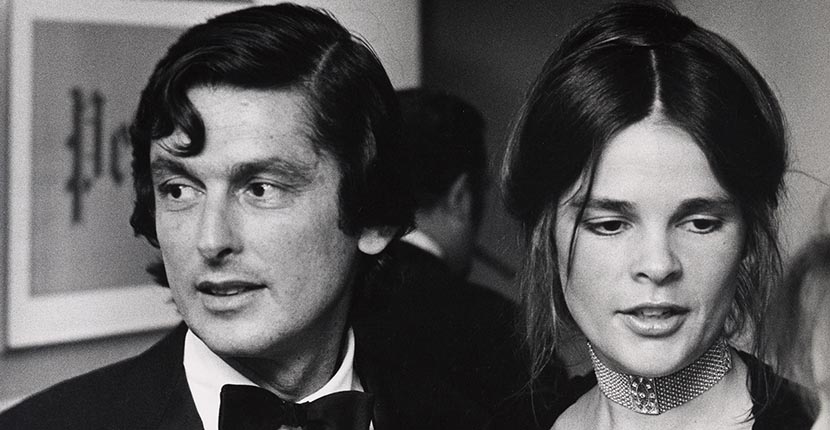 Robert Evans with Ali MacGraw who is wearing a pearl and diamond choker at the 1970 New York premiere of 'Ryan's Daughter.' Photo Ron Galella/Ron Galella Collection via Getty Images

There was a way of dressing up but looking laid back in 1969 that Once Upon A Time…In Hollywood captured to perfection with the costumes and jewelry Margot Robbie wore for her role as actress Sharon Tate. In real life a star who perfectly embodied the style of the period was Ali MacGraw. Her extraordinarily cool look was a blend of knit caps, capes and dresses accented with Edwardian style pins, chokers, beads and silver accessories. A look back at the photos of the era show how she wore her jewels again and again in all kinds of imaginative ways.

The perfection of the ensembles might make you think MacGraw had a stylist, but no. It was long before the current period we live in now when stars are styled for everything from the red carpet to a walk down the street. MacGraw did, however, have a background in fashion. She began her career at Harper’s Bazaar working under the direction of the legendary fashion editor Diana Vreeland. She was also a model and fashion editor at Vogue for several years. Style lessons were clearly absorbed by MacGraw and taken to Hollywood when she decided to become an actress. 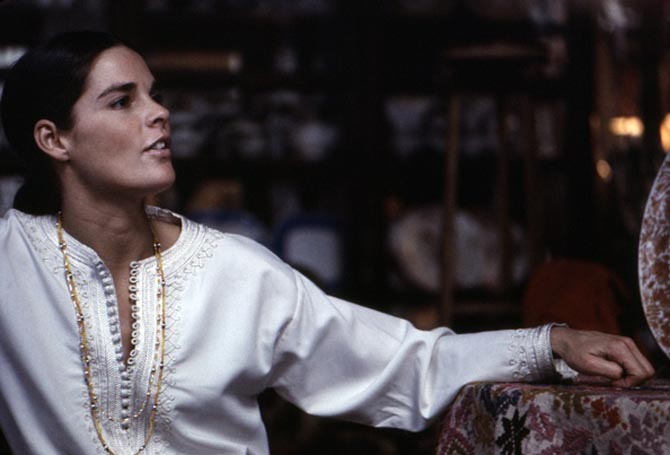 Ali MacGraw wore long beaded necklaces in 1969 similar in style to jewels seen in ‘Once Upon A Time…In Hollywood.’ Photo Getty

In 1969 the 30-year-old married the hottest film producer of the era, Paramount’s Robert Evans and her new career took off when she starred in the hit Goodbye, Columbus. The next year she made her most iconic film Love Story, one of the highest grossing productions in history.

Today, most stories about MacGraw’s personal life focus on the moment when she fell in love with Steve McQueen on the set of the 1972 film The Getaway. The fact is her style was at a peak of chic during the years she was married to Robert Evans. It was a period when her life was filled with film premieres, parties and world travel with her husband who was producer of several iconic movies of the era including Rosemary’s Baby, Harold and Maude and The Godfather.

See some of our favorite looks from Ali MacGraw dating from 1969 to 1972 below. 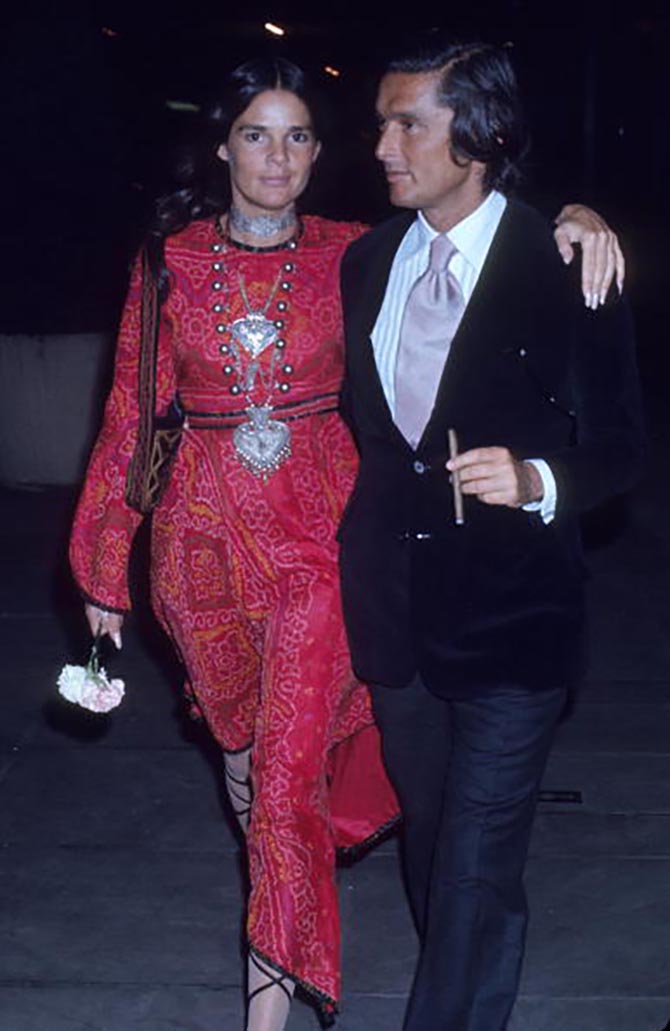 Outside the 21 Club in New York in June of 1970, Robert Evans was captured by the paparazzi smoking a cigar with Ali MacGraw who is holding a flower and wearing a bohemian red maxi dress, gladiator sandals, an Edwardian style choker necklace and several silver jewels that look Indian. 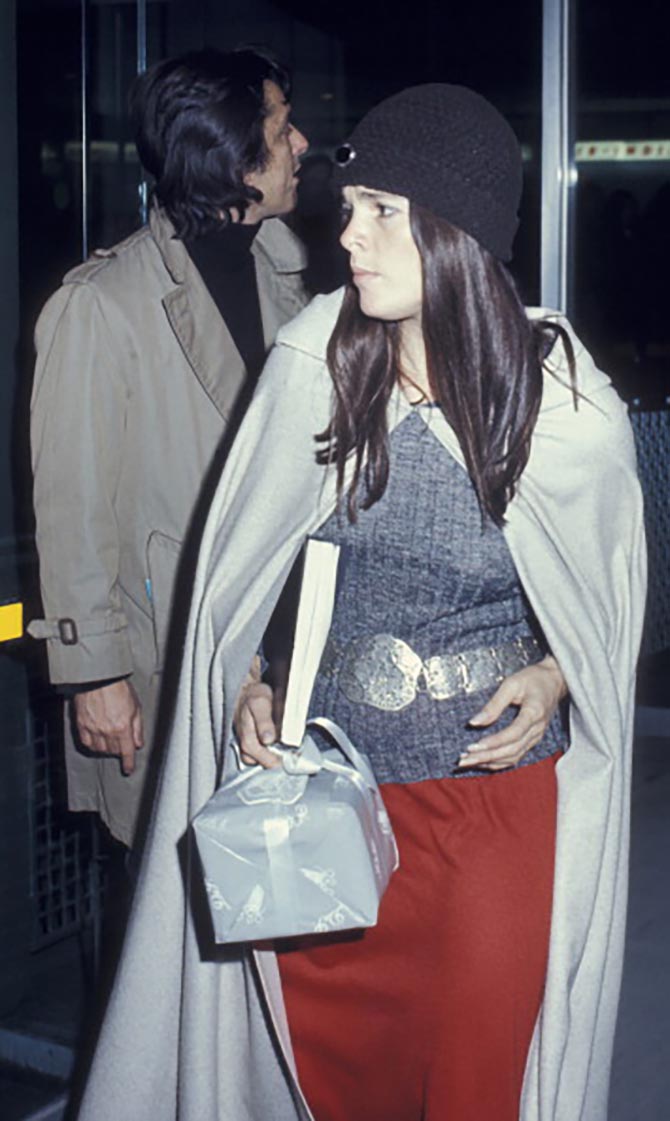 Evans and MacGraw were photographed at JFK airport on March 4, 1971 by the famous paparazzo Ron Galella. MacGraw’s airport style included a beige cape and black knit cap accented with a silver and onyx pin. She cinched the waist of her grey sweater and red skirt with a big silver belt. 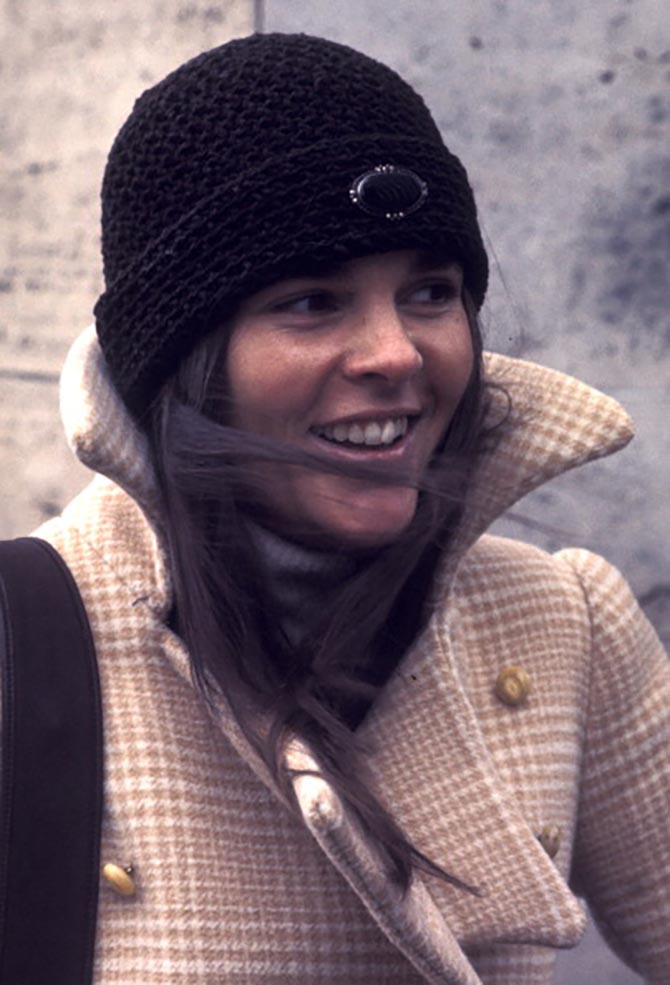 A closer look at Ali MacGraw’s pin on her knit cap can be seen clearly when she was snapped by Gallela on March 8, 1971 outside the Sherry Netherlands Hotel in New York City. 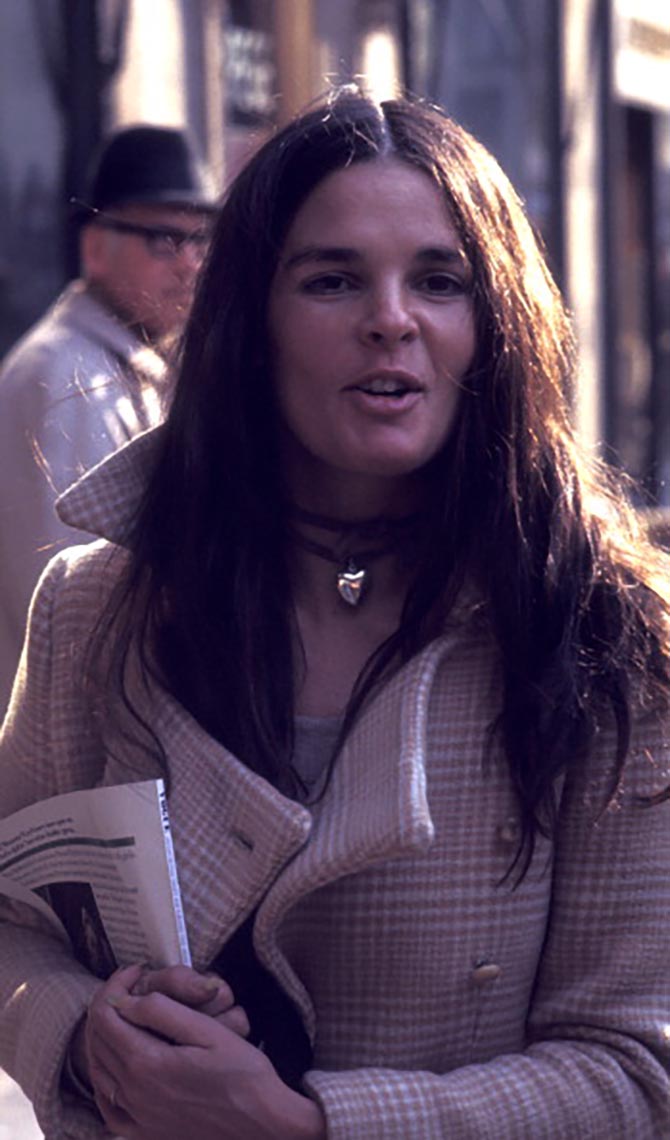 During the same 1971 trip to New York another Galella shot shows MacGraw wearing a silver heart on a black cord tied around her neck. 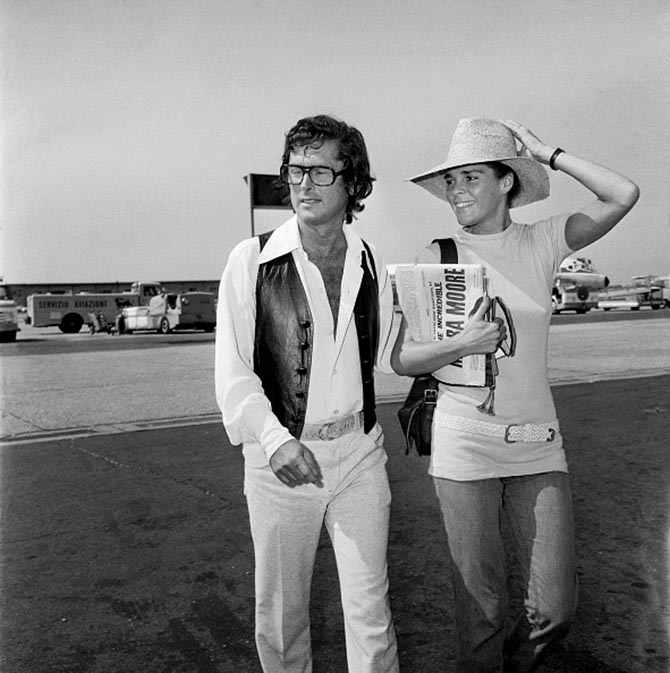 In July 1971, Robert Evans was photographed at the airport in Rome with Ali MacGraw who wore a t-shirt and jeans as well as a Cartier Tank watch. Cartier experienced a resurgence in popularity after the launch of the Love bracelet in 1969. Many luminaries including Warren Beatty, Julie Andrews, Lee Radziwill and Andy Warhol wore the firm’s Tank watch during the era. 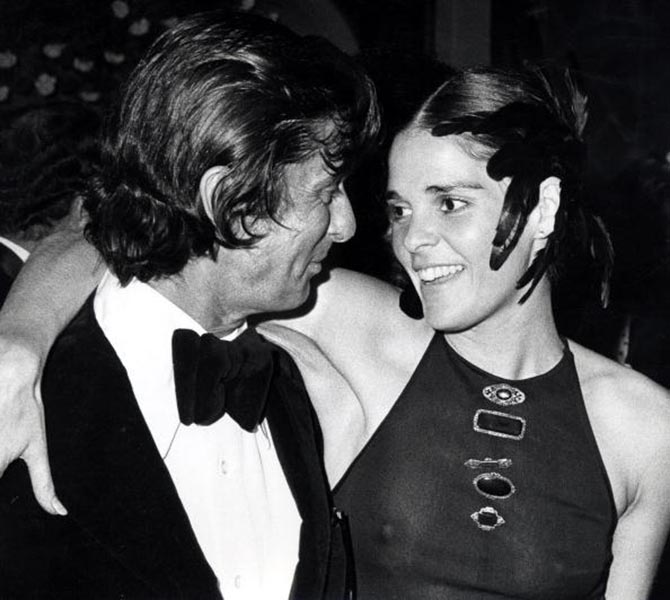 At the 1972 premiere of The Godfather, Robert Evans with Ali MacGraw who wore her collection of antique style brooches pinned to the front of her dress as well as feathers in her hair. 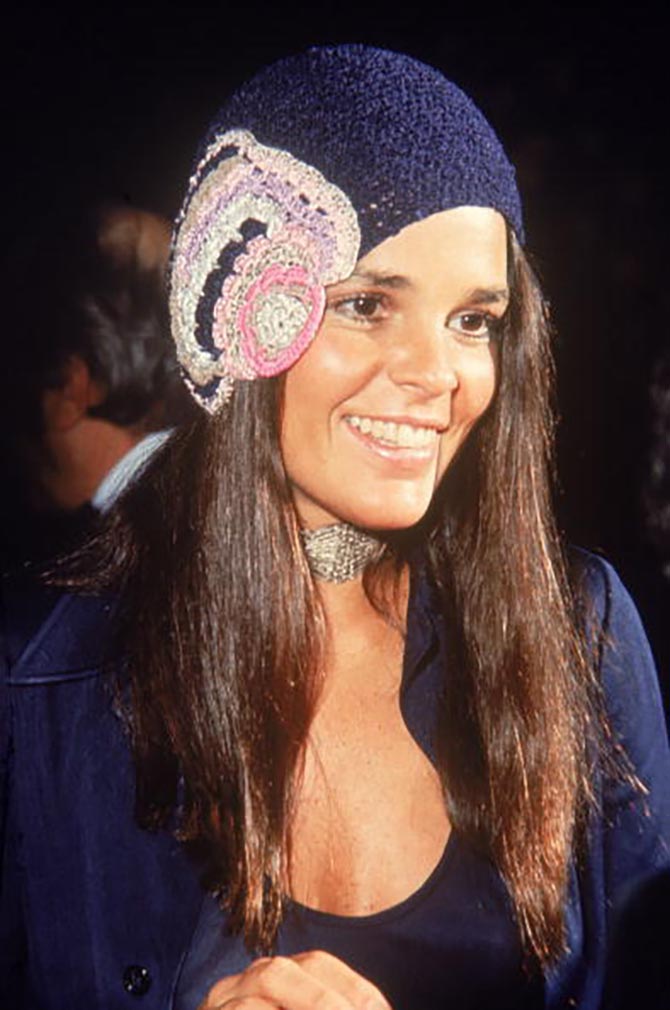 For the 1971 Academy Awards in Los Angeles, Ali McGraw wore an Edwardian style choker and a crocheted cap with her navy blue dress. 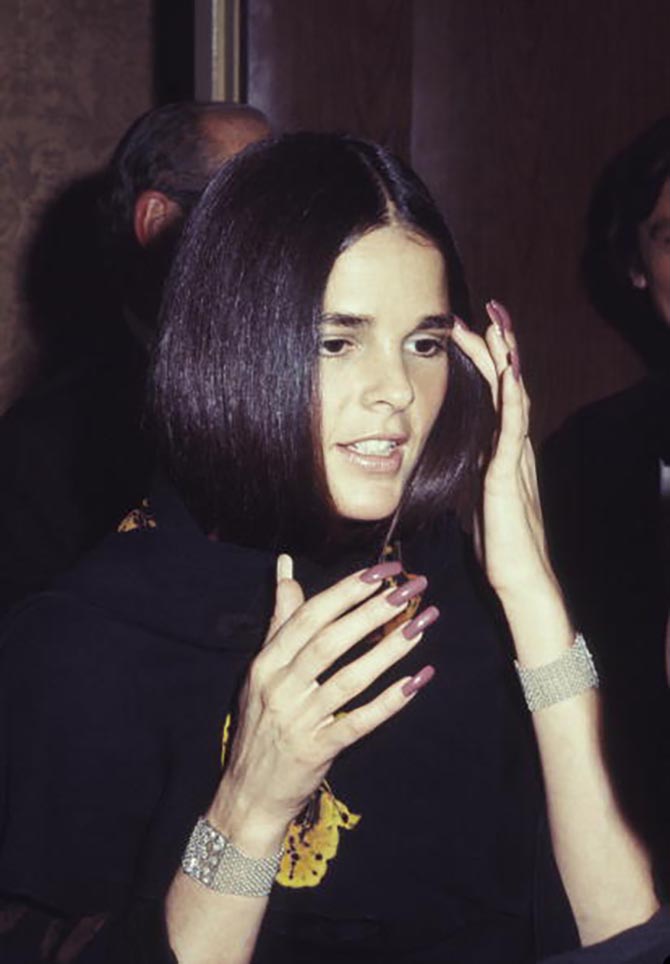 At a 1971 event for Theater Owners in New York, Ali MacGraw sported a pair of Edwardian pearl and diamond bracelets. The pieces seem to show that her choker necklace was convertible and could be transformed into two bracelets.

The Jewelry in ‘Once Upon A Time…In Hollywood’