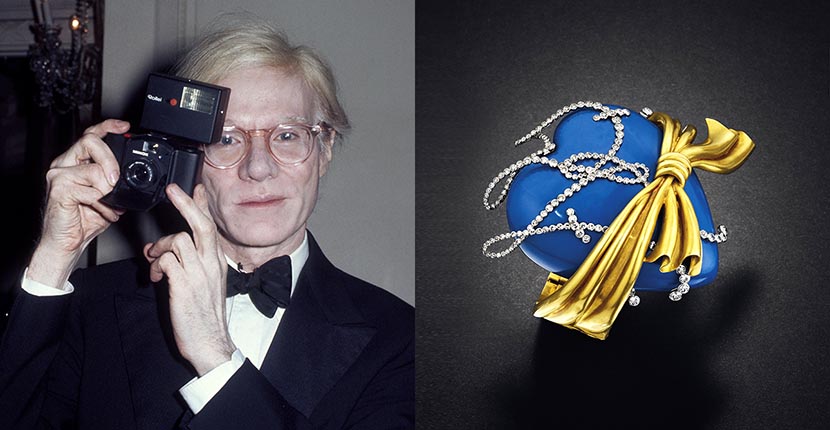 December 4, 2018—At the Whitney Museum of American Art in the Meatpacking District of Manhattan, the critically acclaimed and wildly popular Andy Warhol: From A to B and Back Again examines the pop artist’s work in his first full retrospective in 30-years. The New York Times review of the show by art critic Holland Carter called Warhol “the most important American artist of the second half of the 20th century.” Meanwhile in Midtown at Christie’s and on the Upper East Side at Sotheby’s, another part of Warhol’s character has come back to light. Two pieces from Warhol’s massive personal jewelry collection are going on the auction block this week.

No one knew until after Warhol died in 1987 how extensive his personal collection had become. He never wore the jewels. Oh, sure he mused on jewelry in his singular way a few times. “When I am in Rome I always visit Bulgari, because it is the most important museum of contemporary art,” Warhol once said. Another time he proclaimed, “It would be very glamorous to be reincarnated as a big ring on Elizabeth Taylor’s finger.” Andy recorded a few thoughts on jewelry in his infamous Diaries and in conversations published in Interview magazine, but there wasn’t much evidence of how serious his obsession became. 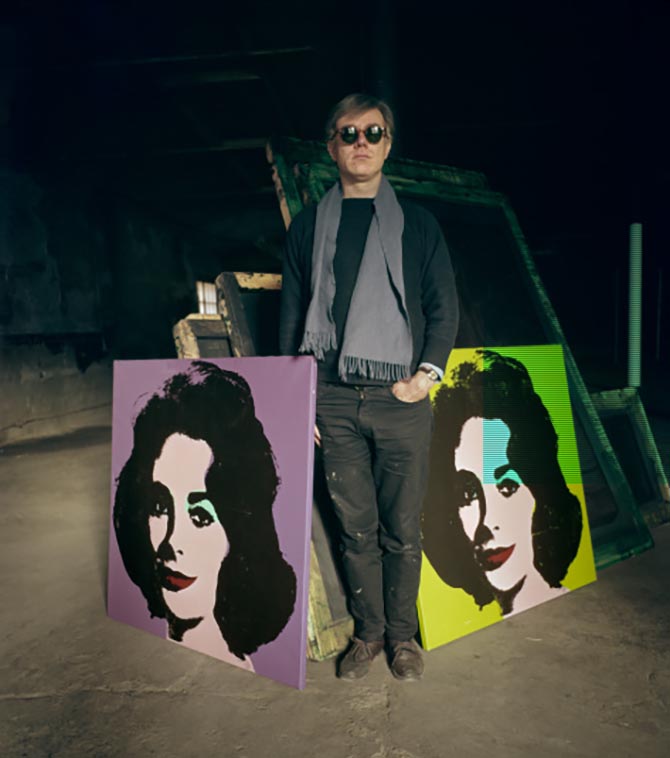 The first part of the jewelry collection came to light when Warhol’s estate was sold at Sotheby’s during a 10-day long auction in 1988. There were several categories and multiple volumes to the sale that included everything from important Art Deco Ruhlmann furniture to a collection of cookie jars. In the jewelry catalogue, there was Art Deco, Retro and mid-century pieces from Cartier, Tiffany, Elsa Peretti, Bulgari and Seaman Schepps among many others.

The designer of a blue enamel heart covered in a scribble of diamonds and wrapped up in a gold ribbon cuff was not identified in the original jewelry catalogue. Well, the eagle-eyed team at Christie’s in New York where the piece is being sold on December 5, 2018, saw the maker’s mark of Charles Profilet for René Boivin. They shared the details with Madame Françoise Cailles who authenticates the jeweler’s creations from the archives. The esteemed expert not only confirmed the design was Boivin, she added a provenance to the piece. 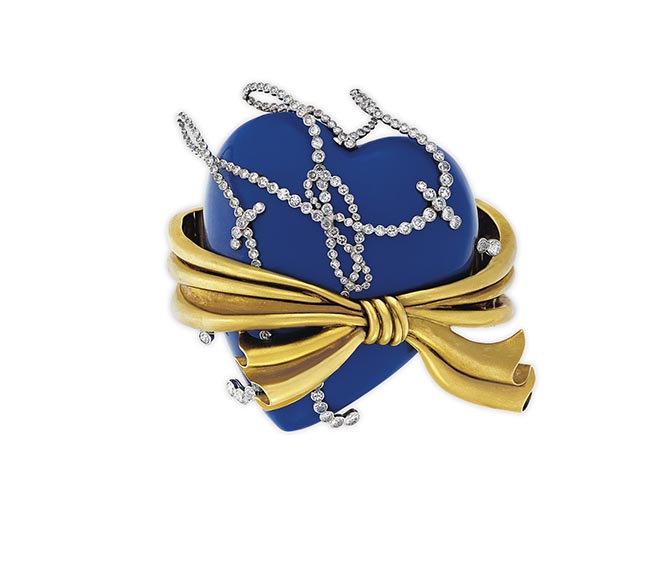 It was originally owned by one of the great jewelry collectors of the twentieth century, Millicent Rogers. The diamond scribble on the front of the jewel is in fact her initials. Boivin’s designer Juliette Moutard is most likely the person behind the creation that was commissioned for Rogers by her third husband Ronald Balcom in 1939. While there are no extant pictures of the socialite wearing the jewel, much has been made about the fact that it reflects the Standard Oil Heiress’s taste for big heart designs. She had a famous big ruby heart brooch from Paul Flato emblazoned with the Latin phrase Verbum Carro and she designed “puffy hearts” for Flato’s collection. 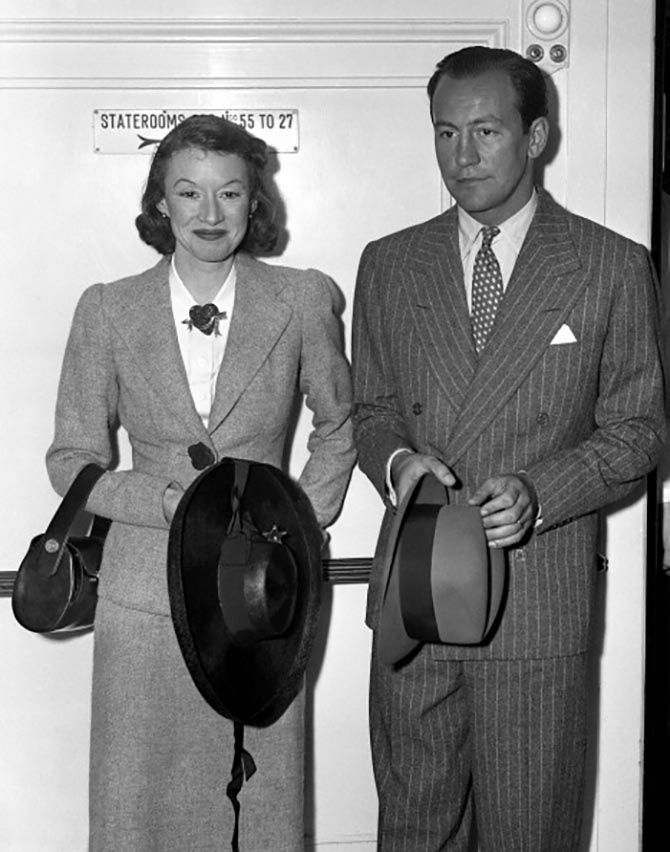 Ronald Balcom with his wife Millicent Rogers who is wearing her ruby heart brooch by Flato. Photo Getty

When and where Andy acquired Millicent Rogers’s Boivin heart is as much of a mystery as the vast majority of his collection. After the contents of his townhouse located at 57 E. 66th Street was sold at auction in 1988, two curators were working though Andy’s archival material when they discovered a secret space between two filing cabinets with more jewelry, lots more jewelry. There was so much it filled another complete sale at Sotheby’s on December 4, 1988 that was titled, The Andy Warhol Collection, Jewelry and Watches Part II.

One Seaman Schepps piece from the second sale is going on the auction block at Sotheby’s in The Magnificent Jewels auction on December 4, 2018.  The bold gold, diamond and ruby hinged crossover bangle made by Schepps around 1940 is composed of polished and fluted gold, round and old European-cut diamonds within star settings. The hinges on the design are accented with ruby cabochons. 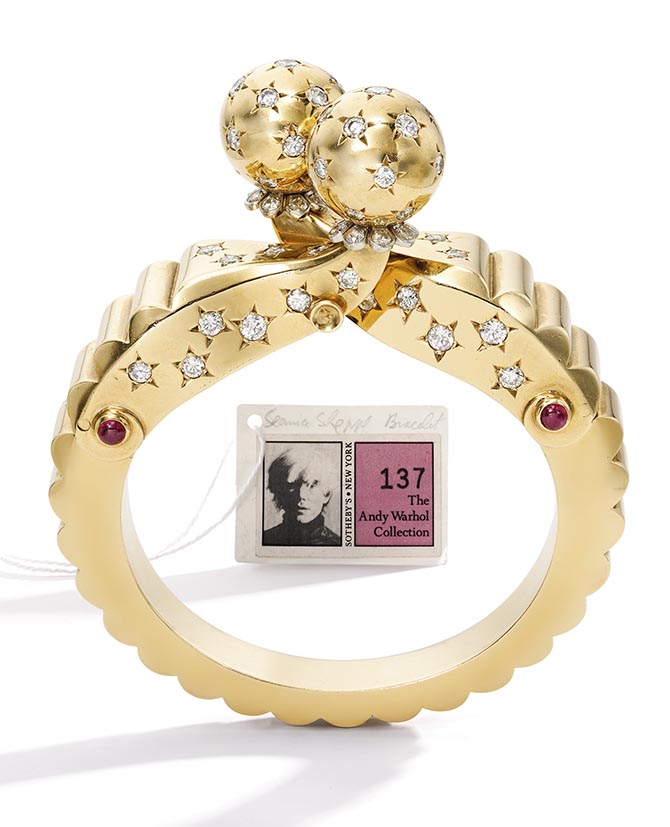 In the introduction to the Jewelry Part II catalogue, there was an essay by Fred Hughes who was Andy Warhol’s manager and the sole executor of his estate. In it he ponders the artist’s secret collection and reason for loving and hoarding jewels.

Why did Andy prefer to hid this jewelry in his house and not keep it in a bank vault? Possibly because he felt reassured by assets he could see and which were easily within reach. Possibly because of the tactile and aesthetic pleasure which he derived from his watches and jewelry, as with everything else in his collection. Possibly because he had inherited an old-world distrust of banks from his mother, and while he had kept some of the jewelry sold in [the May Sotheby’s 1988 auctions] in safe deposit boxes, and some in a safe in his house, he still felt the need for a hidden treasure. Possibly because he loved to have secrets, and this particular secret, to my knowledge, he shared with no one. Of course, this is all speculation, as Andy’s behavior was highly idiosyncratic and unpredictable. He and his legacy continue to amaze and delight me.

This unexpected discovery of wonderful pieces of jewelry that Andy had acquired over the years includes unmounted diamonds–tiny to large–sapphires, emeralds, Art Deco jewelry by Cartier and Van Cleef & Arpels; Peretti and Schlumberger designs for Tiffany; contemporary pieces by David Webb and Seaman Schepps; almost 100 watches from Patek Philippe, Rolex, Cartier, and other distinguished watchmakers. They all show that same fascination and obsession with design, color, shape, and texture that enhanced Andy’s life, inspired him in his collecting, and were so essential to his own aesthetic.”

Jewelry By Artists: The Good, Bad and Ugly