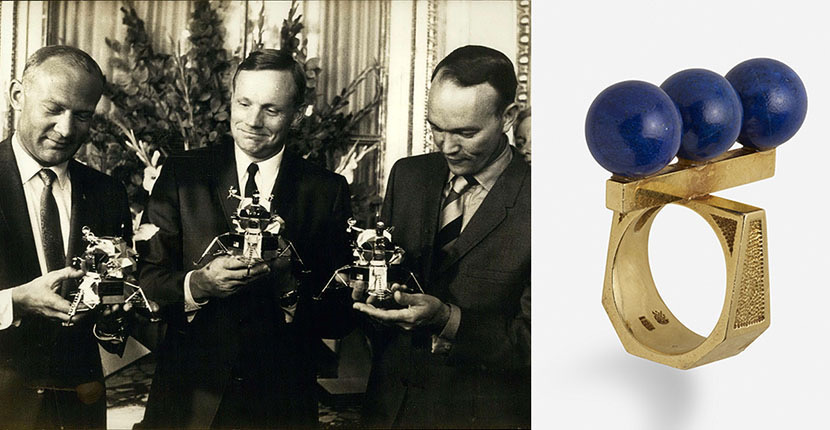 The Tri-Sphere ring Roger Lucas designed for Cartier in 1969 and the Apollo 11 astronauts holding 18 karat gold replicas of the Lunar Module that were made by Cartier in Paris. Photo Alamy and Rago

At Auction: A Cool 1969 Moon Ring by Cartier

The year 1969 was huge for Cartier in New York. The legendary Love Bracelet launched. It was also the year Cartier shattered the world record price paid for a diamond at auction when it acquired a 69.42-carat pear shape for just over $1,000,000. The next day, the jeweler sold the stone to Richard Burton for Elizabeth Taylor. Part of the deal was that it would go on display at the Cartier Mansion for a week before it was shipped to the couple. Over 6,000 people a day lined up on to see it.

While the exhibit might sound extraordinary, and the numbers were indeed huge, it was also very much in the tradition of Cartier in New York to stage special displays of jewelry. Just a few weeks before the somewhat spontaneous Taylor Burton Diamond presentation, there had been the Astrological, Underwater and Geometric exhibit of 200 one-of-a-kind modernist jewels by Roger Lucas, a Canadian wunderkind Cartier invited to show his work.

The Tri-Sphere ring from the exhibit is being offered by the Rago auction house in New York on May 28, 2020. It was inspired by the July 24, 1969 moon landing of the Apollo 11 astronauts, Neil Armstrong, Buzz Aldrin and Michael Collins.

“The landing of the astronauts was very inspirational to me,” explained Lucas to a journalist at the time. “With my love of adventure, I re-lived each moment of their journey and felt compelled to translate it into my world of jewels.”

The three lapis beads on top of an angular gold ring Lucas designed represent, the moon, earth and sun. Like all of the jewels in the collection displayed at Cartier, it is signed: Cartier and MADE IN CANADA. It also had the Lucas maker’s mark. 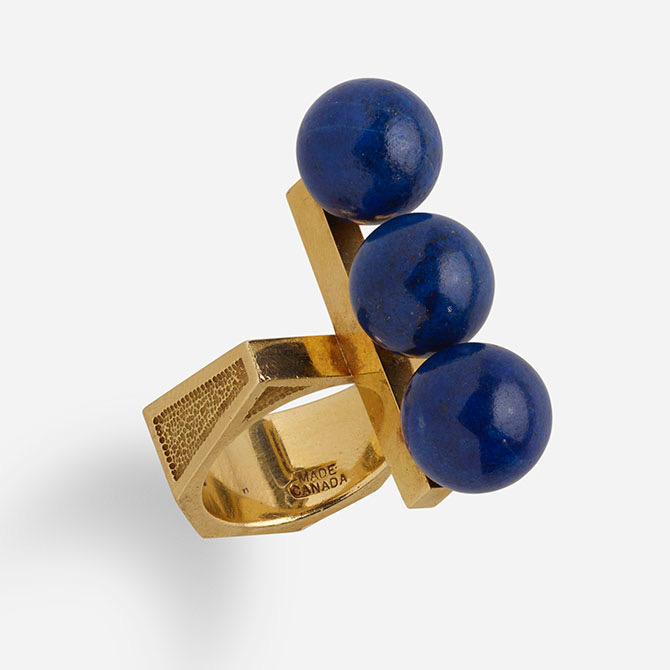 The innovative designer, who studied at École des Arts Décoratifs in Paris and managed a Cartier boutique in Monte Carlo, become well-known when he began working at his father’s Montreal based jewelry firm named, Lucas. The designer not only had conceptual ideas for jewelry, he also felt the pieces should be treated like mini-sculptures “Wear your rings by day, and let them watch over you from your table at night,” Lucas once explained.

If you are thinking it was unusual for a designer to be invited by Cartier to show his work. It was. Although things were considerably looser in attitude at Cartier and, well, everywhere in the late-1960s, the firm also recognized that the cool jewelry style of Roger Lucas could offer their clientele something special.

The opening cocktail party at Cartier attracted lots of press and local luminaries. Hair stylist Vidal Sasson, socialite Gloria Vanderbilt and her husband Wyatt Cooper were among the guests who enjoyed the unique exhibition of the Canadian jeweler at Cartier. This Tri-Sphere ring at Rago is one of the few extant examples of jewelry from the special evening in 1969.