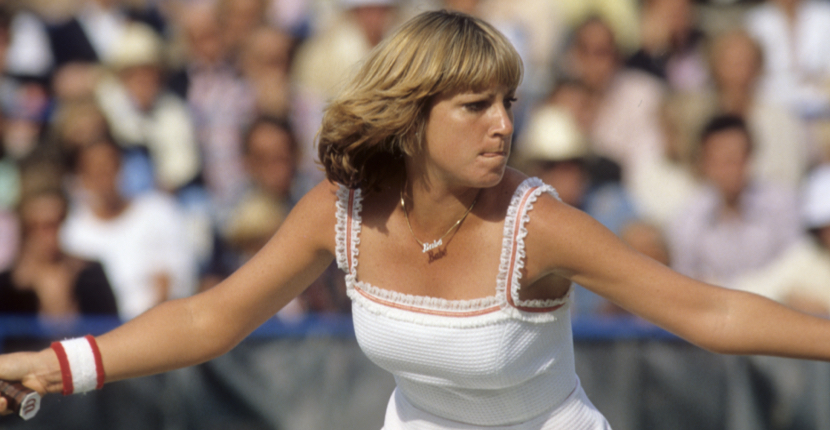 At the 1978 US Open Chris Evert wore her diamond Babe nameplate necklace during a match against Pam Shriver. Photo Sports Illustrated via Getty

September 7, 2021—What makes a trend hit big? I could write a manifesto about the whys and wherefores of the subject but I will keep it brief. Usually, trends catch on because they are in contrast to what’s been happening. There is a touch of surprise to the subject matter. Icing on the proverbial trend cake is if the style has a good name. A name people can easily remember and realize they need immediately.

In 1978, Chris Evert accidently ignited one of the biggest contemporary diamond jewelry trends ever. When she was playing in an early round of the US Open and dropped her delicate diamond bracelet, people thought it was kind of extravagant for her to be wearing such a jewel while she was in competition. The jewel was cheekily dubbed a tennis bracelet by no one knows who. I actually did write a manifesto about the history of the tennis bracelet, because it had been inaccurately told all over the internet.

Anyway, why am I telling you all this? Well, the fact is any time there is a Grand Slam tennis event the story pops back into the top 10 most popular articles on The Adventurine. Tennis bracelets are more popular than ever and people want the backstory.

The interest, and seeing Evert daily during this year’s US Open tennis tournament, made me wonder what other jewelry she wore back in the day. When you see her on television now, it’s clear she is an accessories lover like so many tennis players. In the last week alone, she has worn a Chanel costume pearl necklace as well as a Jennifer Fisher charm necklace among other jewels.

A scan through the Getty photo archives of her days on the court resulted in a real gem. Evert often wore a nameplate necklace with the word “Babe” spelled out in diamonds in 1977 and 1978, the same year her bracelet was dubbed a tennis bracelet

A little research on the old internet turned up jewelry history gold. According to a 1982 story on the Sports Illustrated archive, the jewel was a gift from her then boyfriend, actor Burt Reynolds. “Babe” was the movie star’s nickname for Evert. She clearly loved it, because she wore it all the time.

It’s quite possible, but just conjecture on my part, that Reynolds got the idea to have the necklace made after Evert met him on set of his 1978 film Semi Tough wearing a shirt that said “Babe.”

She also has had fond memories of the relationship with Reynolds. Evert described it to People in 1978, “A girl goes through a time in her life when an older, wiser man is very appealing, very good for her. If Burt likes you, he really takes good care of you. Successful women aren’t a threat to him, and I think that’s what attracted me to him.”

The nameplate necklace also proves that Evert’s 1970s jewelry style is back in more ways than just her tennis bracelet. Nameplate jewels have been popular ever since Carrie Bradshaw made it her signature style on Sex and the City. A laundry list of celebrities have worn them. Fans of Ted Lasso can spot Keeley Jones (Juno Temple) in a “Keeley” nameplate necklace bringing the trend right up to the present.

Oh, and if you are wondering what the dog tag says on Evert’s Jennifer Fisher charm necklace she wore during the US Open the other night, I was too. I reached out to the designer who said it is engraved with the word “Mama.” When I told Jennifer about the necklace Evert wore in the 1970s, she said, “Mama is the new ‘Babe.’”

The Most Memorable Jewels on Sex and the City