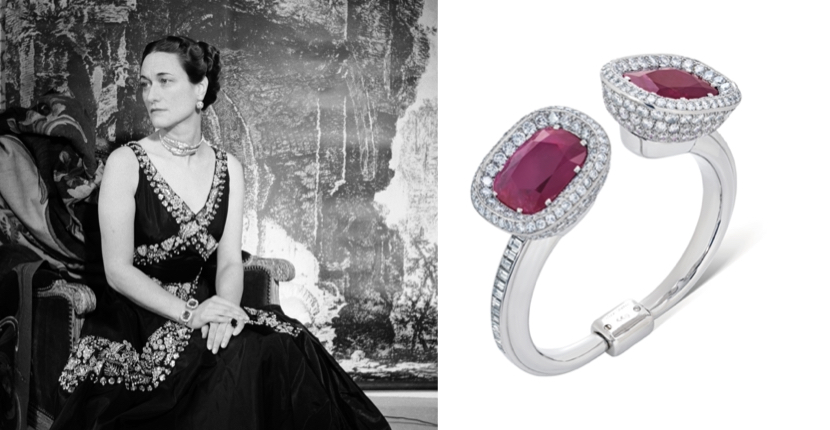 The Duchess of Windsor in a 1939 portrait by Cecil Beaton wearing her Cartier anniversary bracelet at right. Photo courtesy of Christie's

The Cartier jewel is being sold at Christie’s in Geneva

October 1, 2021—We all know now the Duke and Duchess of Windsor were not all they seemed. Of course, that’s an understatement. They were pretty bad characters. But the fact remains, they played a major role in the history of 20th century jewelry. The couple had spectacular taste, second to none, and they pushed the best jewelers in the world forward with their purchases and commissions.

A few moments in their bejeweled lives include popularizing the panther at Cartier. The Duchess had the first really important big cat. Hers was made in 1949 and sat on top of a cabochon sapphire weighing over 152 carats. The Duchess gave Van Cleef & Arpels the idea of making a zipper necklace. She championed independent designers like Suzanne Belperron. When she worked in concert with Cartier’s Creative Director, Jeanne Toussaint, they made magical jewels together.

All of this is a long way around the lake of saying, when a piece that belonged to the Duchess of Windsor hits the auction block it must be given its due.

The Cartier ruby and diamond bracelet the Duke gave the Duchess as a first anniversary present in 1938 is being sold at Christie’s in Geneva on November 9. (The owner purchased it from the Duchess’s estate sale in 1987.) The estimate for the jewel is 1 to 2 million Swiss Francs which is around $1,075,038.

This piece is not as iconic as the Duchess’s Cartier flamingo or her big panther. It ranks closer to her Cartier engagement ring.

The bracelet has the distinction of being featured on the cover of The Jewels of The Duchess of Windsor, a book co-published by Vendome and Sotheby’s a year after the sale of her estate in 1987. [Pro tip: If you want to see all the jewels from the Duchess of Windsor’s sale buy this book. It can be had for anywhere from $26 to $50 and has all the jewels in the original Sotheby’s catalogue that commands prices around $699 if you can even find it.]

The ruby and diamond Cartier bracelet being sold at Christie’s is inscribed, “For our first anniversary of June third.” The design is what you might call second wave art deco. It’s all clean lines with a smattering of geometric shaped gems but larger in scale than 1920s designs.

Cushion-shape rubies weighing around 36 carats highlight the terminals of the penannular form. Approximately 23-carats of pavé-set brilliant cut diamonds encircle the rubies which are lower in the setting to create depth and protect the gems from damage. Thirty baguettes, weighing approximately 2.62-carats, accent the sides.

The jewel is made of platinum and hollow so it is light in weight. It opens with a north west twist rather than an east-west direction.

According to historical records, the couple spent their first anniversary at La Cröe, a villa in Cap D’Antibes they leased in addition to their Parisian mansion.

Harold Nicolson, a British politician who stayed with the Windsors in 1938 wrote to his wife Lady Nicolson (Vita Sackville-West), The Duke and Duchess who were sill dazed by recent months of crisis, ‘have a villa here and a yacht, and go round and round. He digs in the garden.’

The Duchess of Windsor’s Flamingo Brooch