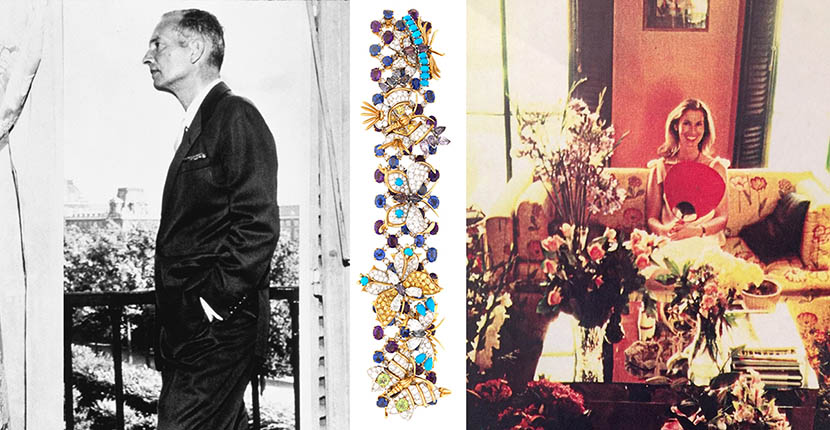 The designer shares her story and vintage photos

Jewelry designer Elizabeth Locke is the Presenting Sponsor of The Rachel Lambert Mellon Collection of Jean Schlumberger on view at the Virginian Museum of Fine Arts until June 18, 2017. Elizabeth not only chose to support the exhibition because the VMFA is her local museum and she is passionate about the art of jewelry, she also has a personal connection to Schlumberger and his greatest patron Bunny Mellon. She graciously shared her story and vintage photos with The Adventurine. 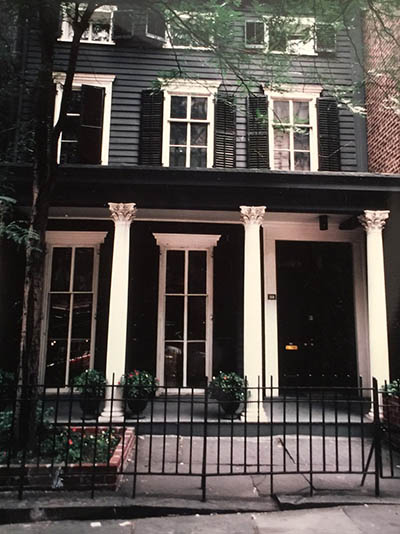 Although I never had the privilege of meeting Jean Schlumberger his existence touched my life in a way that I could never have imagined!

Many years ago I moved from a small town in Virginia to Manhattan to work for an Italian publishing company. As I remember, all of my worldly possessions easily fit into the family station wagon along with my two Great Danes, Franz and FrouFrou, who had accompanied me back from a stint in Italy. The three of us were bound for a sight unseen “garden studio” apartment on 90th Street. The garden, of course, turned out to be a tiny patch of broken glass. But soon, as has happened so many times in my life, fate smiled on me.

I met a Milanese gentleman who had just become the owner of one of the four remaining wooden Federal townhouses in Manhattan. This beautiful house was located at 92nd Street and had been Jean Schlumberger’s home for many years until his recent move back to Paris. The Milanese gentleman had only owned the Schlumberger house for a few days but it was being broken into virtually every night. 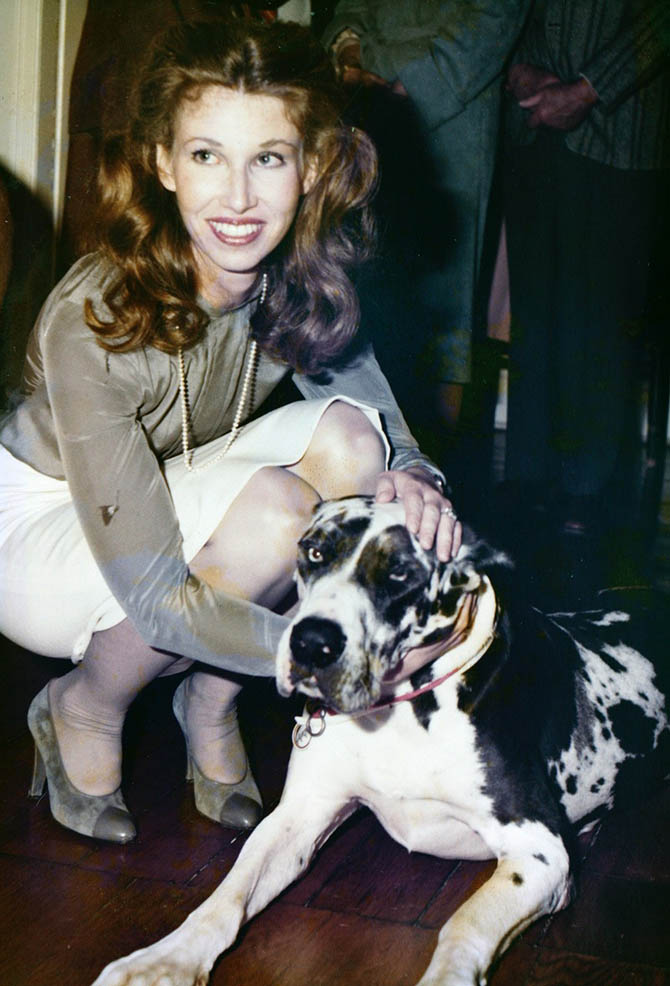 Elizabeth Locke with FrouFrou, one of her two Great Danes. Photo courtesy

When I mentioned Franz and FrouFrou the owner’s face lit up and he proposed that the dogs and I move into the empty Schlumberger house as caretakers. We vacated the “garden studio” the next morning and moved into the 14-room townhouse where the dogs had a large true garden to patrol and I had vast rooms with beautiful woodwork and 12-foot ceilings all to myself!

On my first night alone in the big house twilight approached and an intruders leg appeared over the back wall of the garden. As he began to lower himself into the garden Franz and FrouFrou raced over the back and barked furiously at the intruder who was threatening their new paradise. The leg quickly disappeared back over the wall and for the next three years that I lived on 92nd Street there were no more security breaches.

I was told to help myself to anything that Mr. Schlumberger had left in the house and so I slowly began to get to know the famous Tiffany jewelry designer through his abandoned belongings. There were a few beautiful Indian papier-mâché birds, drawers full of colored pencils and sketch pads, a handful of unfinished designs, some exotic seashells, lots of soufflé dishes, and several shelves of French books all having to do with flowers, birds, India, seashells, and gardens. I could absolutely feel his presence in this wonderful house, especially in the kitchen and it’s adjacent dining room where Schlumberger had frequently entertained his close friends and patrons Jackie Onassis, Babe Paley, and Mrs. Mellon. 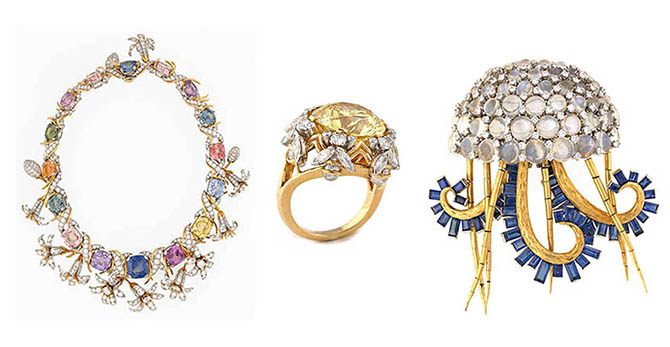 A few of Bunny Mellon’s Schlumberger jewels in the exhibit at the VMFA that show the influence of nature on his work, reflecting some of the books Elizabeth Locke found among the belongings the designer left in his home. Photo Travis Fullerton © Virginia Museum of Fine Arts 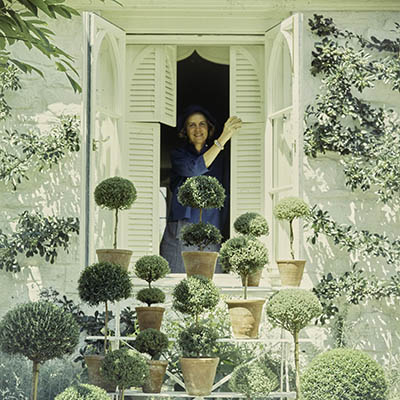 A few years past and I left 92nd Street, married my husband, and moved to a farm in Virginia. I started writing for Town & Country magazine and one day I was summoned to the office of Frank Zachary, the legendary editor-in-chief of Town & Country. He waved a blank Hearst check in front of me and told me that I was now living in close proximity to the farm of Mr. and Mrs. Paul Mellon near Upperville. “Elizabeth,” he said in his forceful voice. “If you can get an interview for T & C with Mrs. Mellon or, better yet, Mr. and Mrs. Mellon, you can fill out this check for any figure you want!” Slim Aaron’s, the photographer, chuckled in a corner.

Naïve and never one to back away from a challenge, I began attempting to contact the Mellons. I tried every approach and tactic that I could think of and all, naturally, to no avail. I received a series of polite, but firm, refusals penned by Mrs. Mellon’s social secretary on various exquisite writing papers. Eventually, I gave up but I saved the notes on the pretty paper.

In the meantime, I was assigned to write a story about Bangkok and became fascinated by gemstones and the goldsmith’s art. I retrieved Mr. Schlumberger’s colored pencils and started designing jewelry. 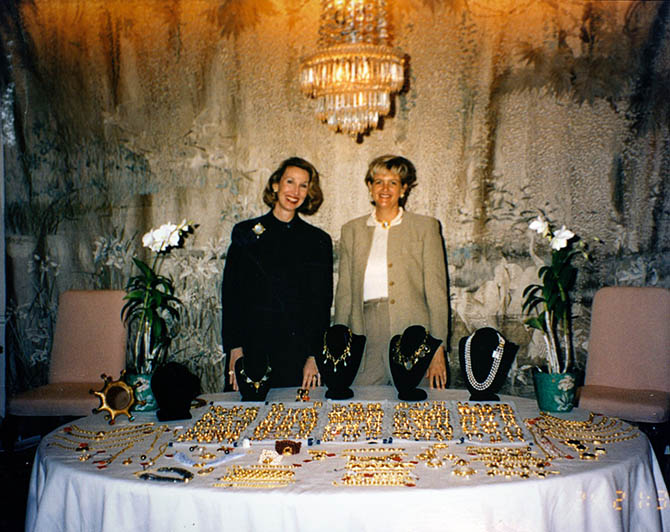 I have now been designing jewelry for nearly 30 years. Had it not been for my years in Mr. Schlumberger’s house surrounded by his spirit I would never have dreamed of becoming a jewelry designer.

Mrs. Mellon’s gift of her Schlumberger pieces to the Virginia Museum of Fine Arts was a generous one indeed. I am happy to be able to facilitate in a small way this exhibition so that everyone can see the remarkable art that Mr. Schlumberger and Mrs. Mellon, friends and collaborators, created together.

The Schlumberger Exhibit Goes Behind The Scenes

Me and Crazy About Tiffany’s