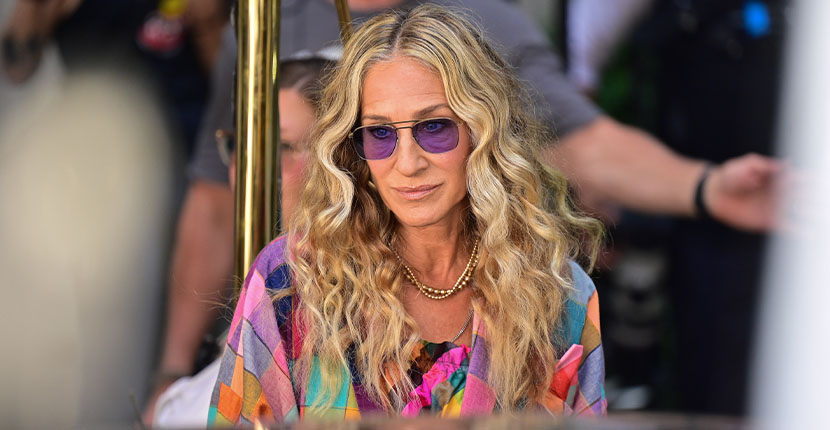 Sarah Jessica Parker in "And Just Like That..." wearing a Marlo Laz necklace among other jewels. Photo Getty

Updated January 21, 2021—Back in the day when Sex and the City was in its prime, jewels Sarah Jessica Parker wore on the show launched a countless number of emerging designers and major trends.

Of course, things were different in the late 1990s and early aughts. People’s attention was less diffuse on social media and streaming channels and what not. As an InStyle jewelry editor, I remember the period well. The clothes and, of course, plotline were always the first thing discussed on Monday after the show aired on HBO Sunday night.

Can the Sex and the City reboot And Just Like That…, recreate the same magic in the jewelry department? In short, the answer seems to be “yes.”

The costumes have already inspired a couple of Instagrams. There is the official one, @andjustlikethatcostumes, from the costume designers Molly Rogers and Danny Santiago. There is also a fan page devoted to the looks @justlikethatcloset.

Even The New York Times got in on the very early pre-gaming of trying to guess if there would be a new Carrie necklace on the show, meaning a signature piece, and if the styles would take off. The August story was so premature the costume designers were not even allowed to conduct an interview with the Times yet.

A jewelry designer who did speak to the Times journalist, Allison Fry from Fry Power, had a $595 turquoise and malachite necklace in one of the initially released stills from the production that sold out on Matches.com over the summer. (It is currently available on the designer’s website.)

With the series out today, we know a lot more about the jewelry in Carrie’s costumes. One consistent look is necklaces and they are usually layered. Something she didn’t do much of in the past.

Find out more about them below.

Carrie wears a couple of cool chokers from Nakard, a collection by Nak Armstrong, repeatedly on the series. In the photo above she has on the designer’s Baguette Tile Riviere Necklace with a Fred Leighton opal choker, her New York State Helen Ficalora charm necklace and cluster earrings.

I don’t think Carrie ever repeated an outfit in Sex and the City and I doubt she will in And Just Like That…, but I have always loved the fact that she wore jewels repeatedly like women do in real life.

The trailer for And Just Like That… revealed the Carrie necklace makes an appearance. The style or a custom version with your name are available from Pat Field, the original costume designer of Sex and the City, for $330.

In the photo above, you can see how SJP wears the Carrie necklace with pearls, a signature jewel from the past, and a Narkard Small Green Onyx Dot Necklace.

In the “Some of My Best Friends Episode,” Sarah Jessica Parker has lunch with the girls and wears a Larkspur & Hawk rivière “Sadie” large rivière with a vintage top. Similar necklace styles can be found on the designer Emily Satloff’s website. They range in price from $3,600 to $6,000.

Pearl necklaces have been a constant in Carrie Bradshaw’s jewelry box over the years. In And Just Like That… Sarah Jessica Parker continues to wear one. Her style now is a classic 16-inch long strand of Akoya pearls from Mikimoto in the episodes “Little Black Dress” and “When In Rome…”

From the beginning, the main theme of Sex and the City has been love, so it makes sense Carrie would have a heart necklace, but a cool heart necklace. The jewel she wears above is the Marlo Laz Spiked Heart Necklace.

Made in Manhattan—where the designer Jesse Marlo Lazowski has a boutique, essentially around the corner from the location used for Carrie’s apartment in the West Village—the Marlo Laz Spiked Heart Necklace is composed of gold and diamonds.

Jesse says the spikes represent strength and perseverance, two other constant themes in Sex and the City.

Another Marlo Laz jewel in Carrie’s collection of necklaces is the Mini Gold Squash Blossom Bead Necklace. In the image above she is wearing it with her vintage New York State charm necklace, pearl studs and bracelets.

The Marlo Laz Mini Gold Squash Blossom Bead Necklace is composed of handcrafted gold beads. The design is a tribute to strong women who shared a love of the Southwest including Georgia O’Keeffe and Millicent Rogers.

Among all the jewels Carrie is seen wearing in the images for And Just Like That…, it appears her Helen Ficalora New York State charm necklace is, to answer the New York Times question, her new Carrie necklace.

She wears the jewel all the time and any fan of the show knows, when Sarah Jessica Parker talked about the original Sex and the City series and received accolades for the show, she always thanked New York City and said how it was an important leading character in the program. It would make sense that she wants to wear New York near her heart now more than ever.

The Just Like That Closet Instagram identified the charm as coming from New York based jewelry designer Helen Ficalora. The price for the piece is $375.