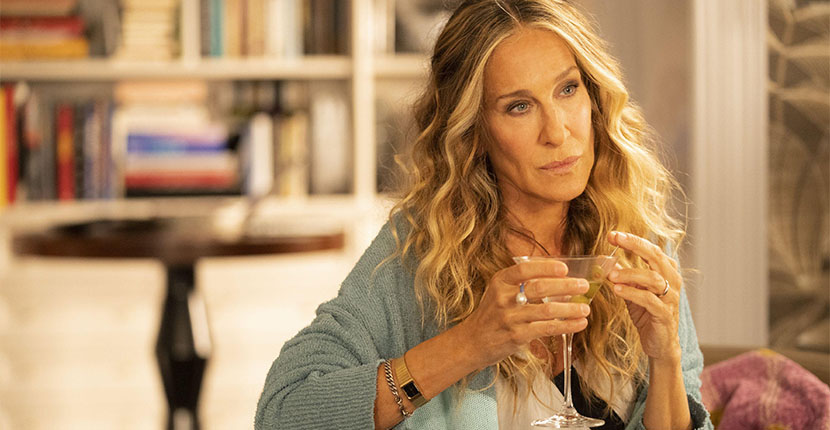 The pearl ring, the gift from her neighbor and the wedding bands

February 11, 2021—Sex and the City fans have had strong opinions about And Just Like That… but most people agreed the last episode finally felt more like the series we all loved so much. We want to know what happens with the podcast guy! In other words, the show is ripe for another season.

Plus, it gives the AJLT creators a chance to right some of the wrongs people had a fit over. And if the wrongs linger on, people seem to love hate-watching the show anyway. Few have garnered the same amount of ink as And Just Like That… on so many subjects and in outlets ranging from The Atlantic and The New York Times (by my count 18 stories) to, oh you name it, Pop Sugar (too many stories to count).

I know people adore the jewelry details on what Carrie Bradshaw (Sarah Jessica Parker) wears. The same audience still looks back for jewelry credits on the original series. They are obsessed with the many necklaces Carrie wore throughout And Just Like That…

There were also a few rings on SJP’s fingers that caught my attention or worked into the storyline. Get the details below and keep your fingers crossed we get another season.

The band is composed of silver and decorated in violet enamel. Several other colors are available on the designer’s website. It costs $355.

The Ring From The Jewelry Designer Neighbor

After lots of bad neighbor behavior, Lisette (Katerina Tannenbaum) knocks on Carrie’s door and says, “I’m sorry for the home invasion but just real quick, I’m a jewelry designer and I wanted to give you this” Carrie says she thinks the ring is pretty and, “I love a home invasion with what I’m assuming is free jewelry.”

Well, it wasn’t exactly free, Lisette was hoping for a little social media attention from Carrie for the ring. And she obliged.

In real life, the Clustered Floret gold-plated ring with freshwater pearls was created by Pacharee. It costs $444.

The first few episodes of AJLT were rough for Carrie after losing Big (Chris Noth). She didn’t want to take off her wedding band and put on Big’s ring at certain moments as well.

The matching jewels received several extreme closeups. Clearly with the detail shots in mind costume designer’s chose well-made classics that could stand up to that kind of scrutiny by the camera.

Let ‘Emily in Paris’ Be Your Valentine’s Guide