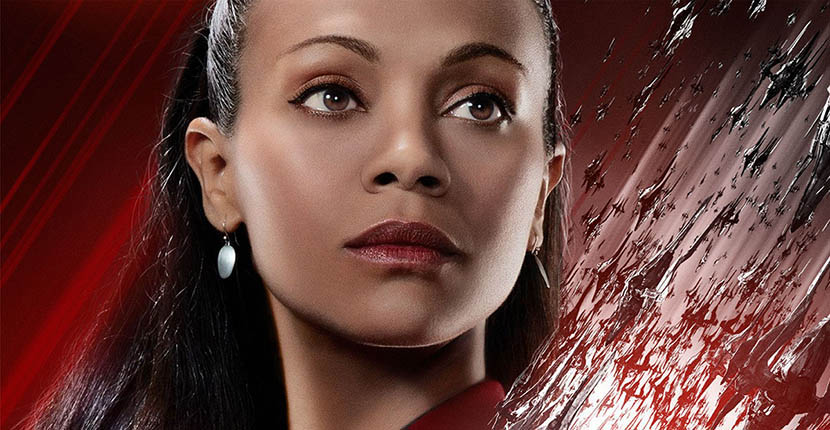 Exclusive: The Jewelry In ‘Star Trek Beyond’

Uhura’s Vulcan Necklace turns the plot while her earrings shine

If you are surprised to see Star Trek Beyond in this column about jewelry and movies, you have not seen the film yet. Obviously, it is not all diamonds and pearls like the array of treasure in the jewelry blockbuster hit of the summer. The jewelry is much more, however, than just the statement earrings worn by Lieutenant Uhura in every Star Trek ever made. The Vulcan Amulet Necklace is a vehicle for the romance between Uhura (Zoe Saldana) and Commander Spock (Zachary Quinto). It plays a part in the action—yes, I said action.  And it also inspires some great banter. 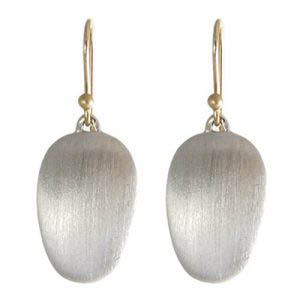 Before getting into the creation of the one-of-a-kind necklace lets look at the earrings for Uhura. Art jewelry classics by Ted Muehling, the Small Silver Chips were sourced at the Los Angeles jewelry boutique August by Elena Balshem from costume designer Sanja Milkovic Hays’ team. Smaller in scale than the earrings worn by Uhura in previous productions, they were appropriate for the intensity of Star Trek Beyond that mainly takes place on the planet Altamid. The beautifully shaped silver and perfectly sculpted gold French wires in the earrings translated magnificently on the big screen.  While the inspiration for the design was certainly organic, like most of Muehling’s work, they look futuristic in the sci-fi context.

The key jewel in the movie, Uhura’s Vulcan amulet necklace, was created by the props department. 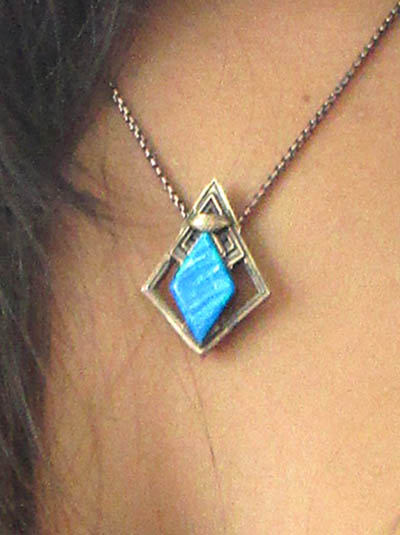 “I can make a space gun almost without thinking about it, but if you want to do jewelry you have to pay attention,” explained Andy Siegal, the prop master on the production, who was reached by phone in Los Angeles. The first thing Andy did was enlist illustrator John Eaves, a Trek veteran with experience dating back to the 1989 film Star Trek V: The Final Frontier. “John understands the importance of the Trek visual language,” said Andy.

In the script written by Simon Pegg and Doug Jung, the necklace had belonged to Spock’s mother so Eaves generated a few designs with a retro Star Trek vibe. The concepts were 3d printed in various sizes, shown to the director Justin Lin for approval and tried on Saldana for the fit. Next wax models were made for the pendant by a jeweler and transformed into metal that was aged. A box chain necklace was sourced and added to the amulet.

Meanwhile Andy went on the hunt for the right blue gem to set in the jewel. “We found a beautiful opal but it was too expensive plus we needed to make three,” said Andy. “One for Zoe, one for her double and one in case something happened to one of the other two.”  The resolution to the situation was to find someone who could make a synthetic opal. “We went crazy into the details of this thing. We wanted the entire piece to look cool and real. We had the synthetic stones cut three times to get the striations right and make sure the stone was the perfect width, because, well, you never know how close a close-up is going to be.”

The first time the necklace appears on screen there is only a glimpse of the blue stone in Saldana’s hand.  (See the clip above.)  It enters the film plot when the action gets heavy and shines in all its glory at the end.

The Powers of Jyn’s Kyber Crystal in ‘Rogue One’

A Look Back at Princess Leia’s Jewelry in ‘Star Wars: A New Hope’

There Is Lots of Jewelry In ‘The Last Jedi’