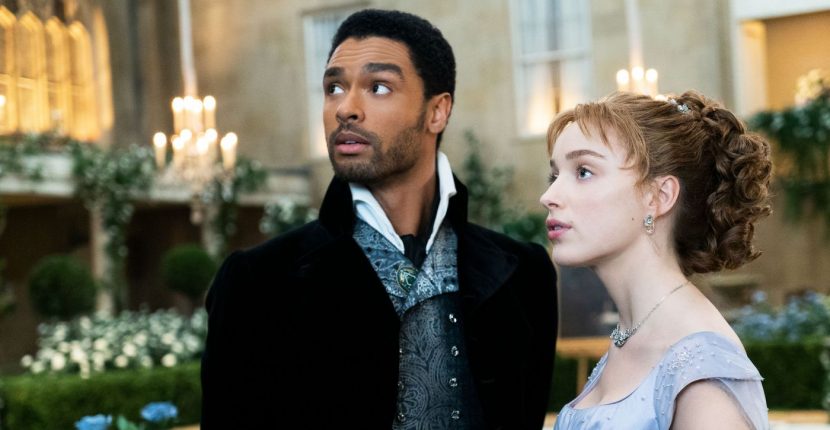 Jewels That Should Have Been In ‘Bridgerton’

The Regency romance series has everything, but good jewelry

January 12, 2020—Passions are running deep for Netflix’s Bridgerton. The eight-episode Regency romance, produced by Shonda Rhymes and based on Julia Quinn’s best-selling novels, has inspired countless stories every day since it dropped on Christmas.

There are profile pieces on the emerging talent in the diverse cast. Gossip items have delved into the real-life relationship status of stars, Regé-Jean Page and Phoebe Dynevor. The playlist of songs in the production has been reviewed. And the on-set intimacy expert has even done interviews.

Top of mind for fans is the question of the future of the series. Will there be another season? The answer is a resounding “yes.” In fact, there could be several more seasons.

At this point I must confess I could not watch more than 15-minutes of the first episode. I had to stop watching because of all the bad jewelry. It was patently costume, but that’s not the main issue. Almost nothing looked like it was Georgian jewelry from the Regency era. It was badly fitted, some necklaces looked painful to wear. It was all a bit much for this jewelry historian.

But bowing to the pressure of the popularity of Bridgerton and realizing it is going to be around for a while, I thought let’s walk positively into the future and shine on the jewelry possibilities of the period and the main characters.

After all Georgian jewelry, the styles made during the Regency period that was mainly defined by the final years of the reign of King George III, is one of the most popular areas of vintage collecting. The colorful romantic looks have been so hot the out-of-print book on the topic Georgian Jewellery 1714-1830, originally published in 2007, escalated in price to over four figures. It was recently reissued and is now back to its original price.

In order to bejewel Bridgerton’s characters properly, I reached out to the Gallery Director at Simon Teakle, Christine Cheng, to find out if she had watched the show. She did. See her stylish suggestions culled from the Simon Teakle collection below. If these pieces had been worn, I would have been glued to every second of the series. 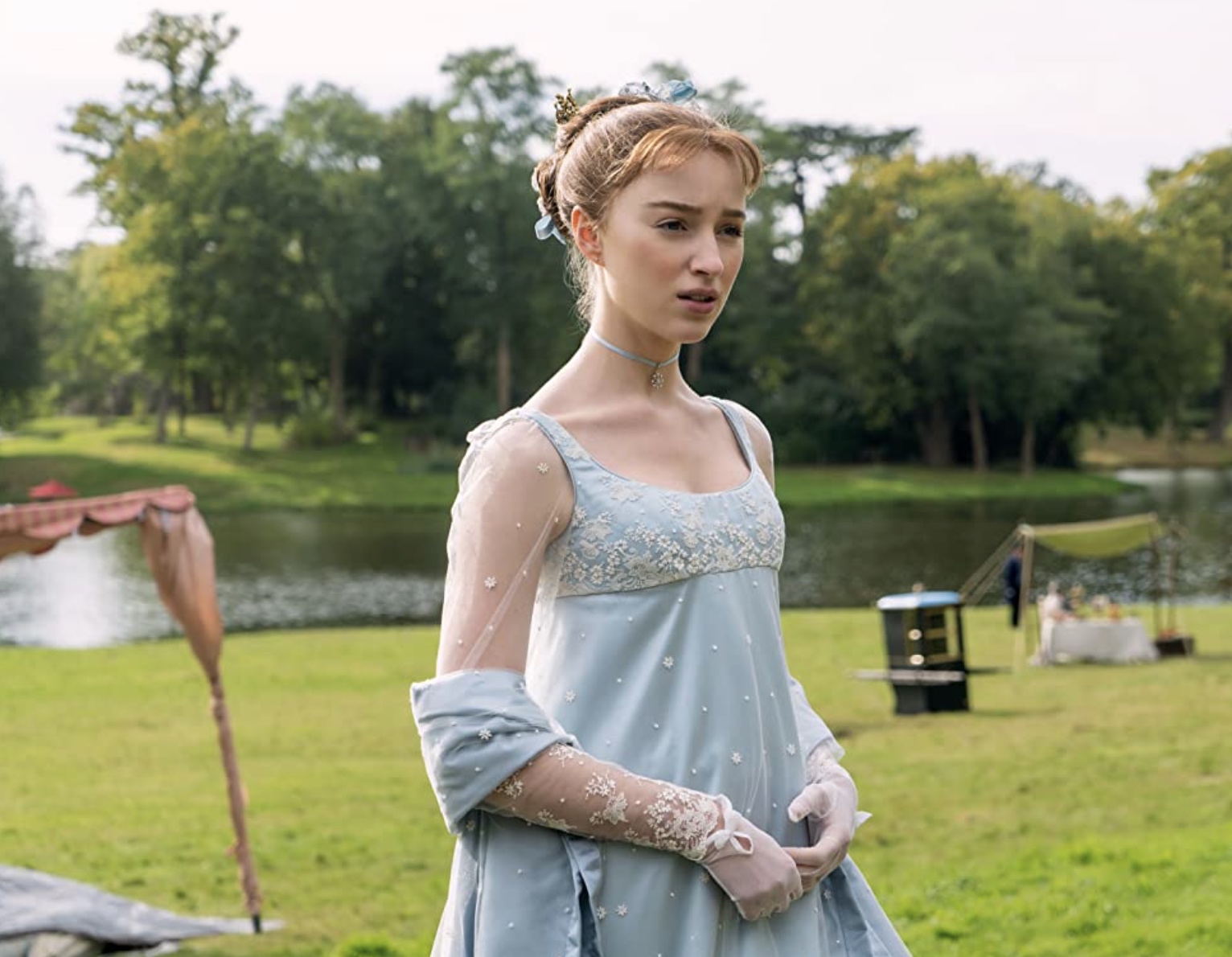 “When you see Daphne and other members of the Bridgerton family they are usually wearing blue,” explains Christine. “I think our diamond and natural pearl Wedgwood cameo pendant would be perfect for her. 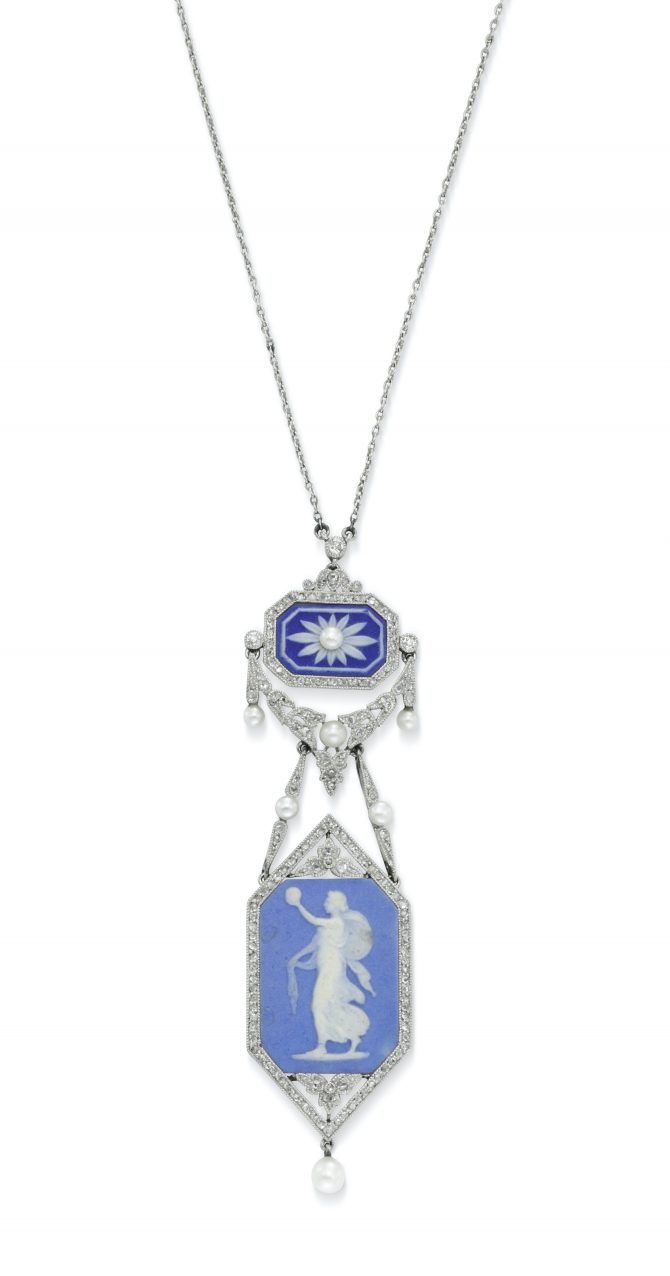 It was made in 1905, so the date and design are not true to the period, but the look would still be quite nice. Plus cameos were very popular during the Regency era.” 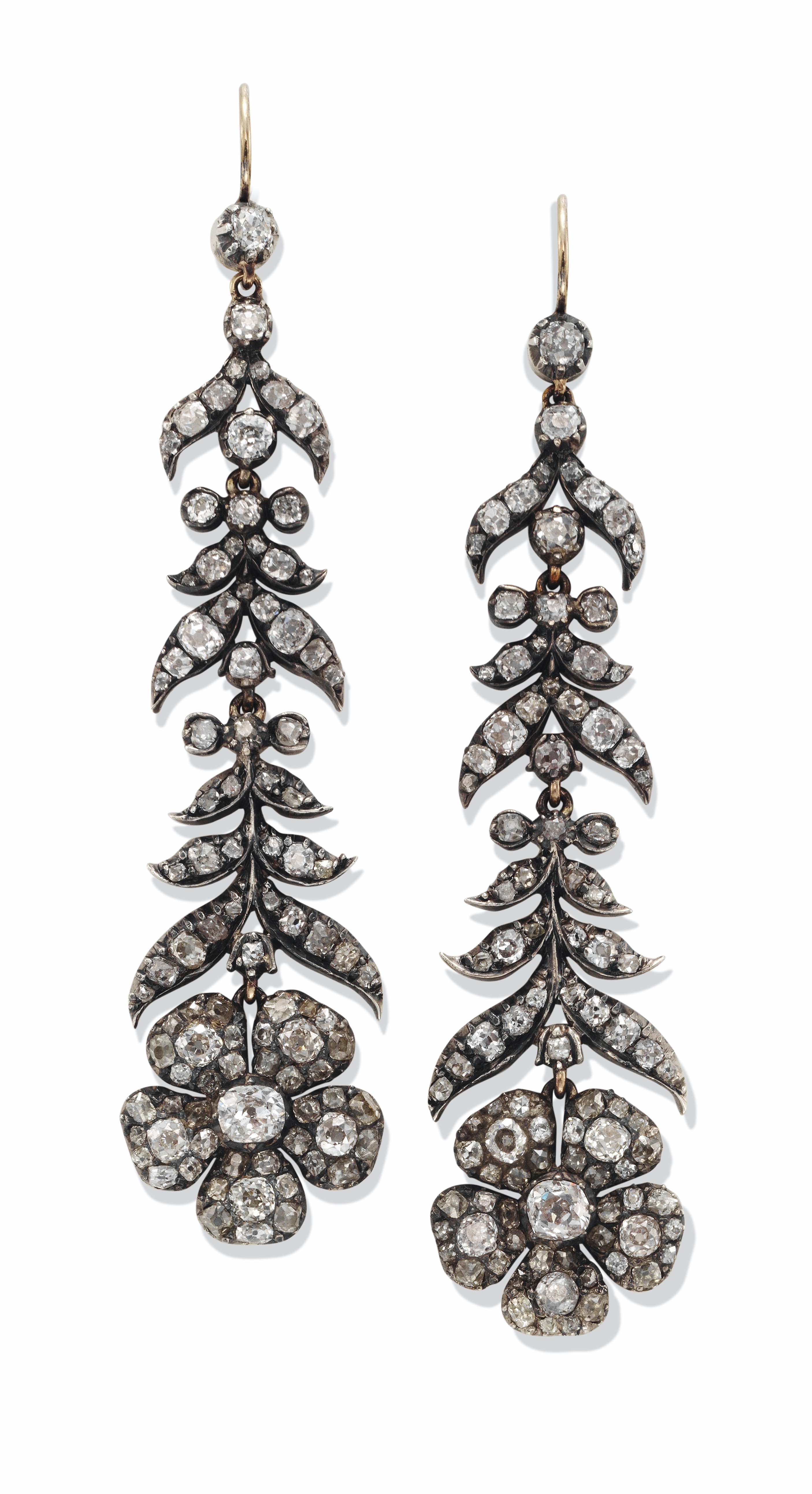 Daphne is described as “a diamond of the first water” in Lady Whistledown’s gossip reports so I think she should have diamond earrings befitting that description for evening events. We have a beautiful pair with a floral motif from the period.” 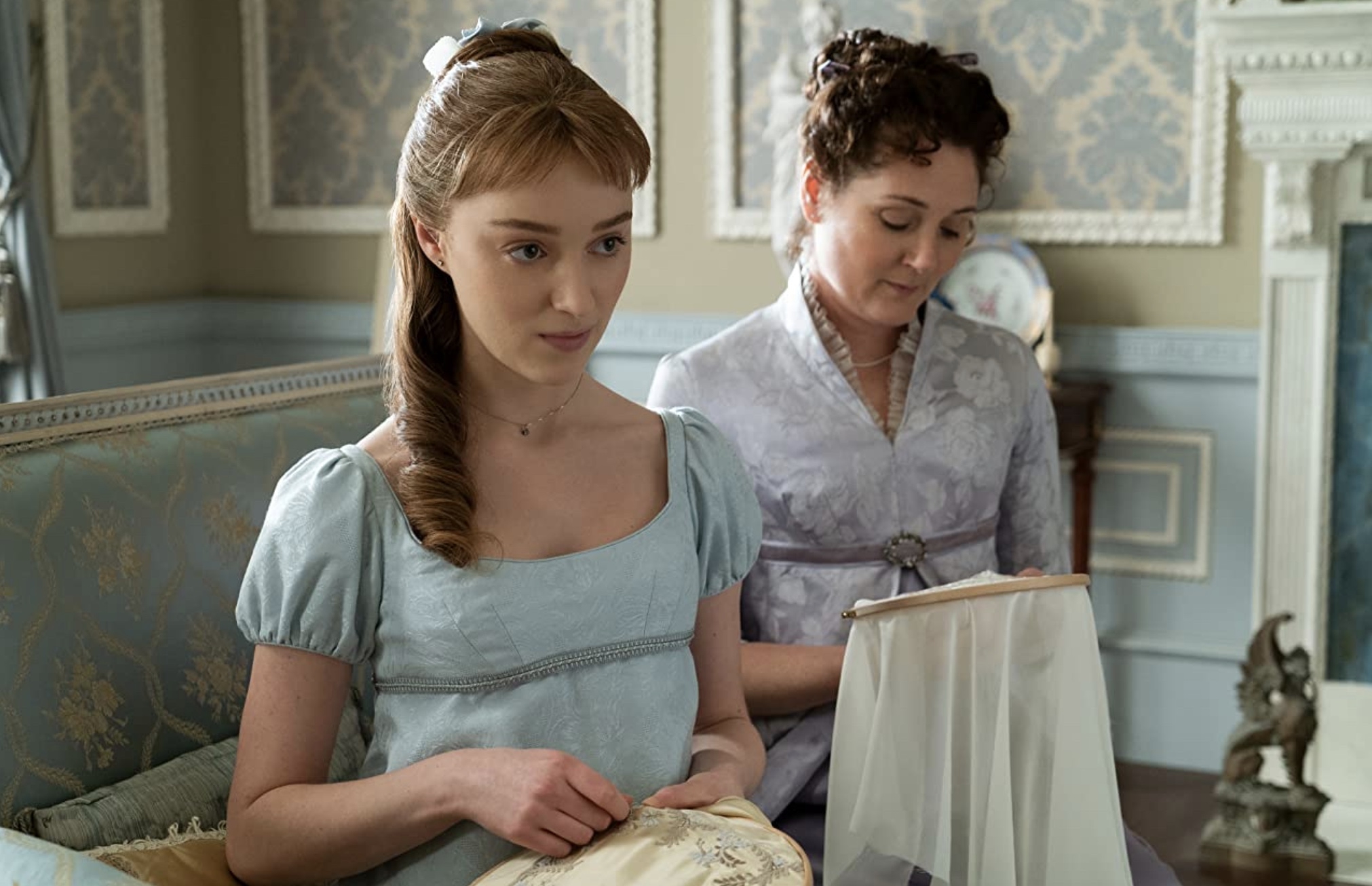 “Daphne’s mother, Violet is very kind and married for love. She has excellent taste but is also very comfortable in her skin,” says Christine. “For her jewelry, it would be lovely if she had some amethysts to match the color cue in her name.” 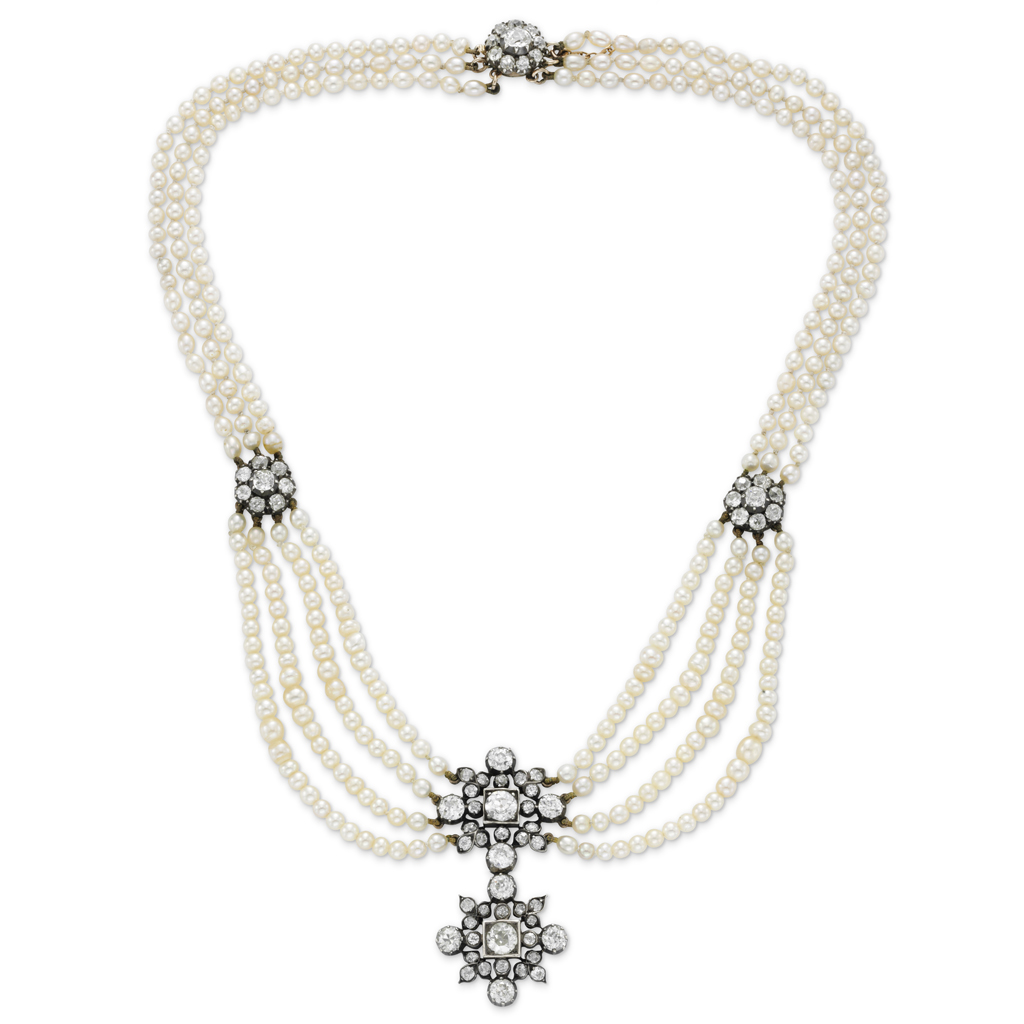 “I could also envision Violet in our triple strand natural pearl and diamond necklace made around 1860.” 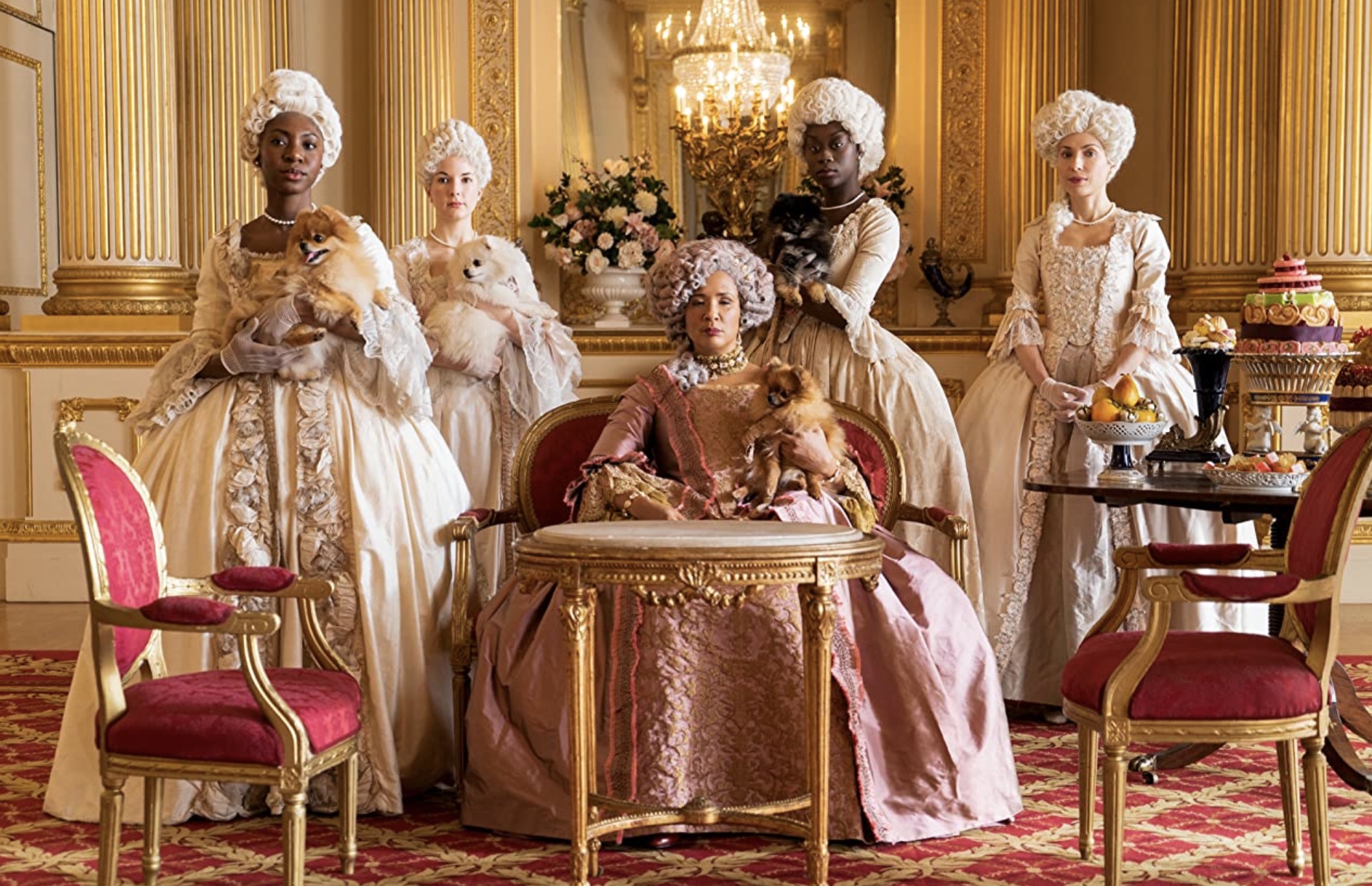 “Queen Charlotte should get some major drip, because she is all about opulent fashions and formal court life,” explains Christine. “She is concerned with the welfare of the upperclass and very plugged in and curious about everything.” 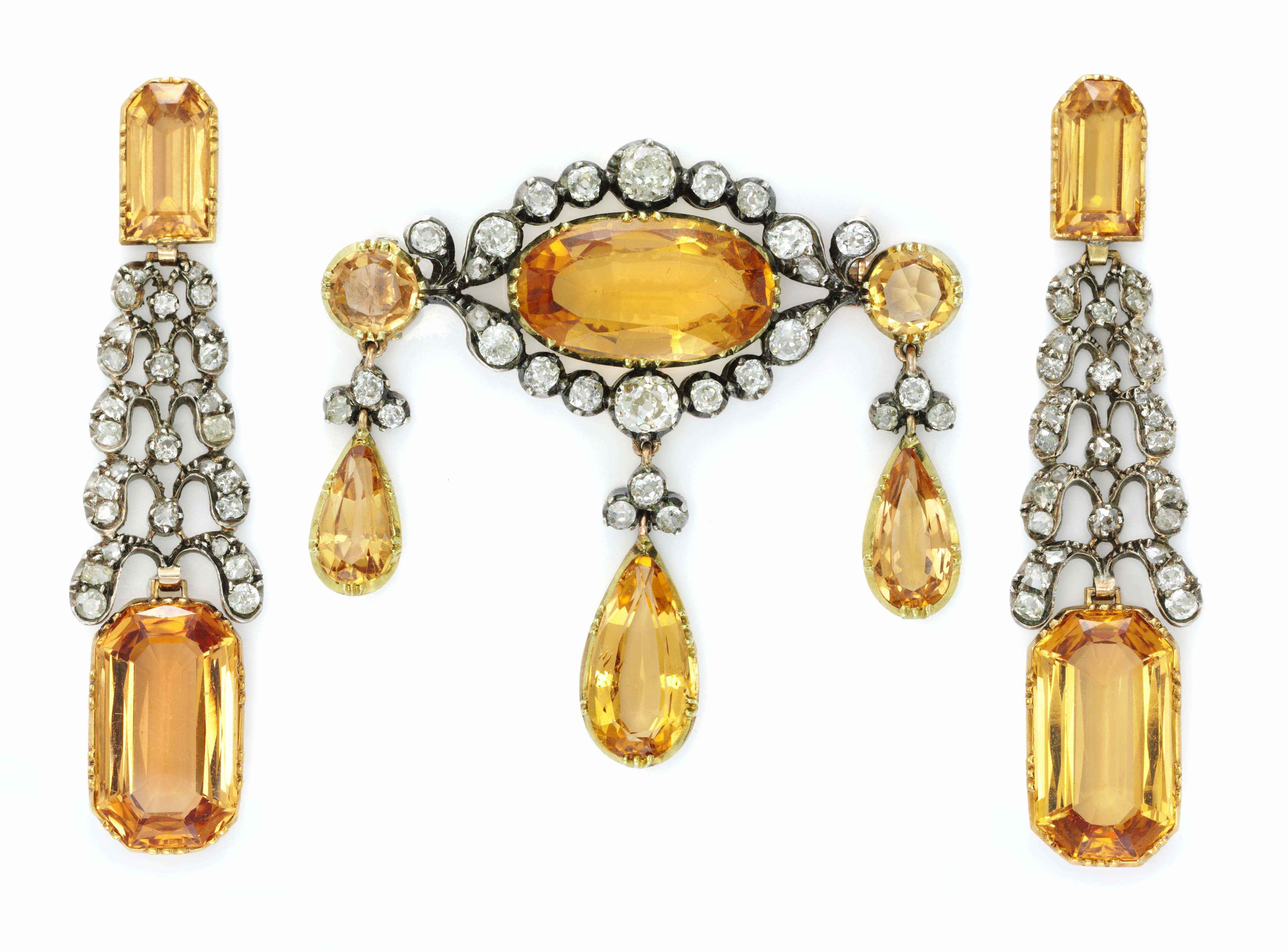 “We have a lot of jewels that would work well on her, but if I have to pick one it would be our antique Imperial Topaz and diamond demi-parure that was made around 1770,” says Christine. “The color matches her attire and the gold tones in one of her sitting rooms.” 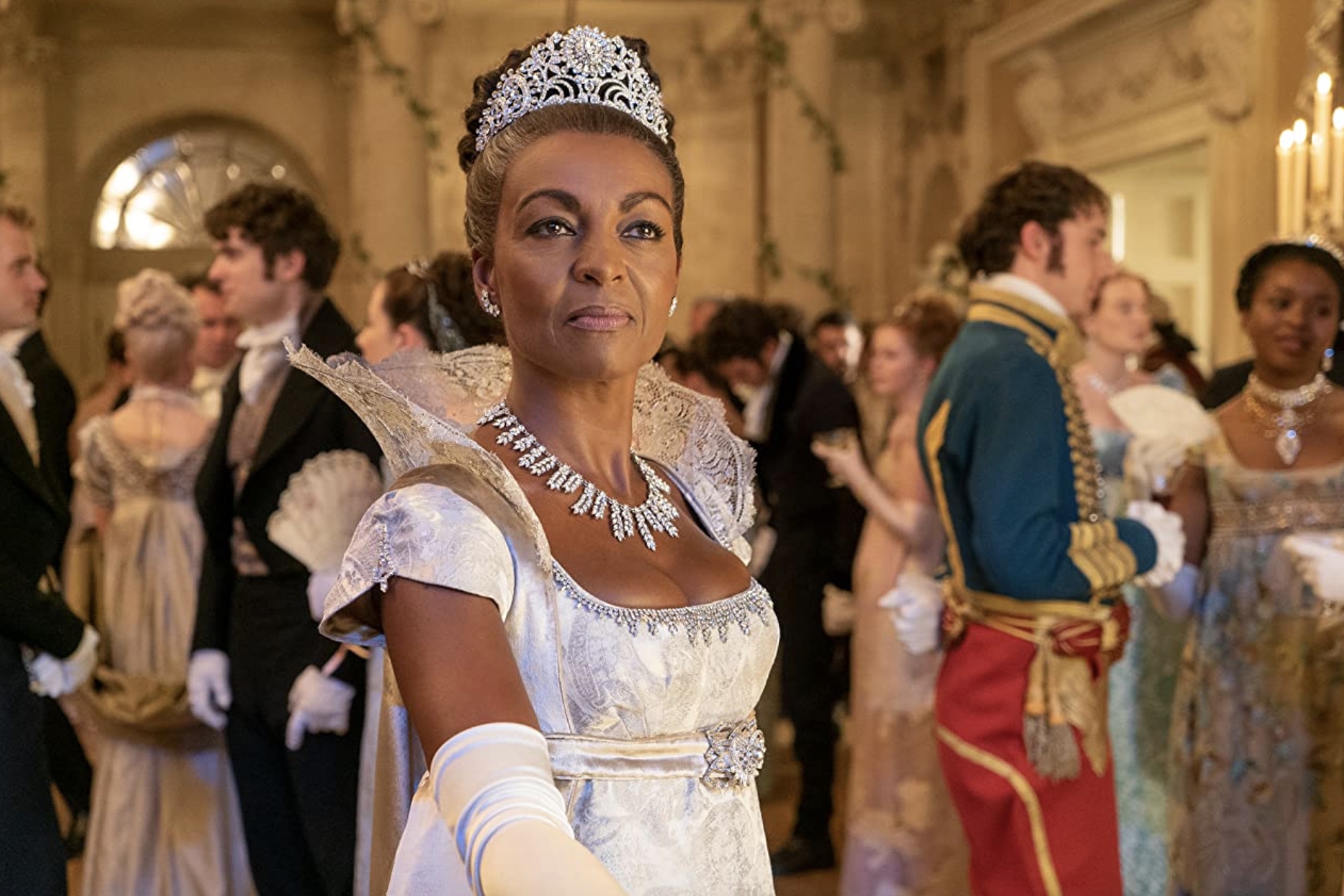 “Lady Danbury is a grand dame of society and a mother figure to the duke,” explains Christine. “She has a formidable, regal manner and guides him in a commanding way.” 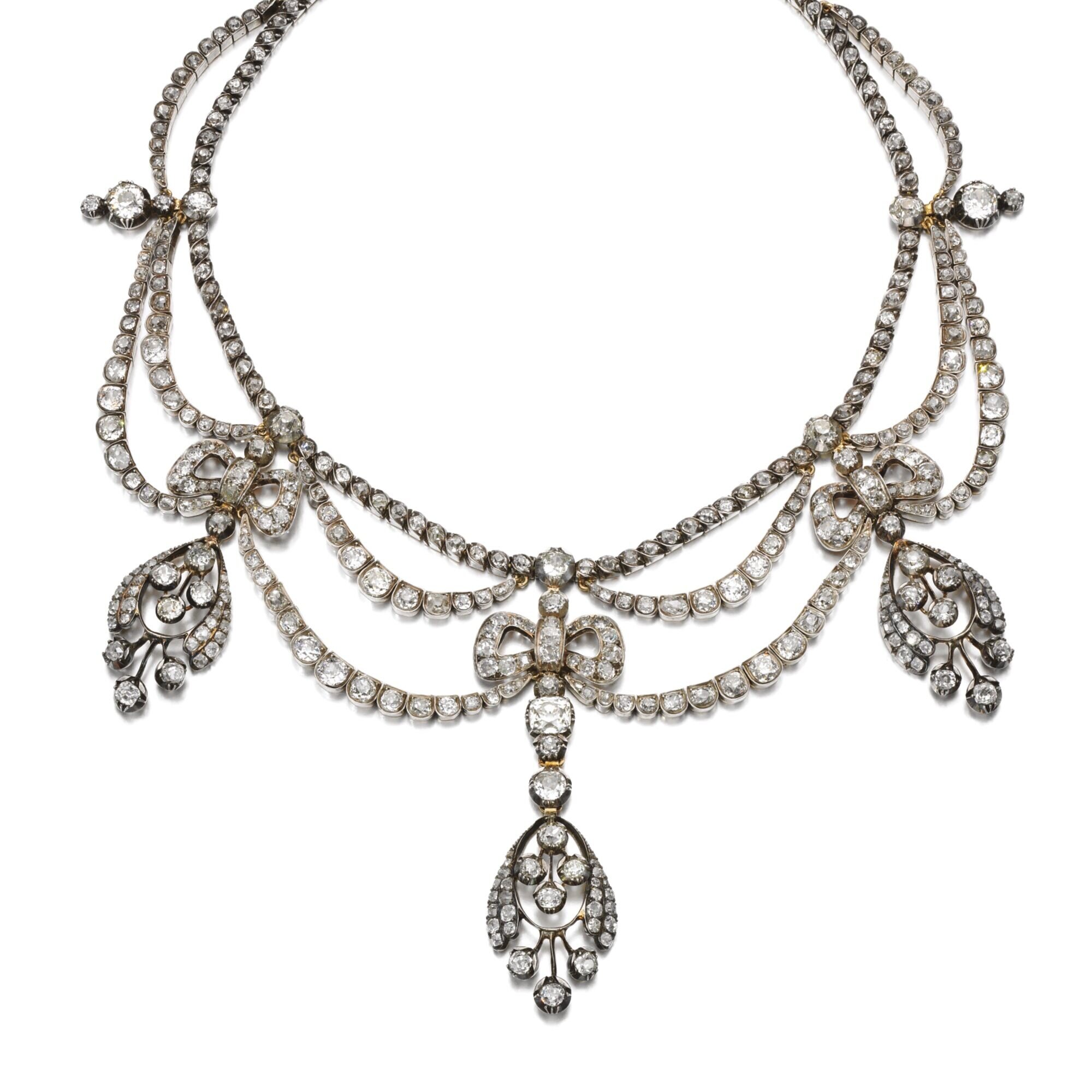 “Our antique diamond necklace with ribbons made around 1840 would be a perfect statement piece for her,” says Christine. “It was made in France and has the same type of romantic ribbons and swags found in Georgian jewelry.” 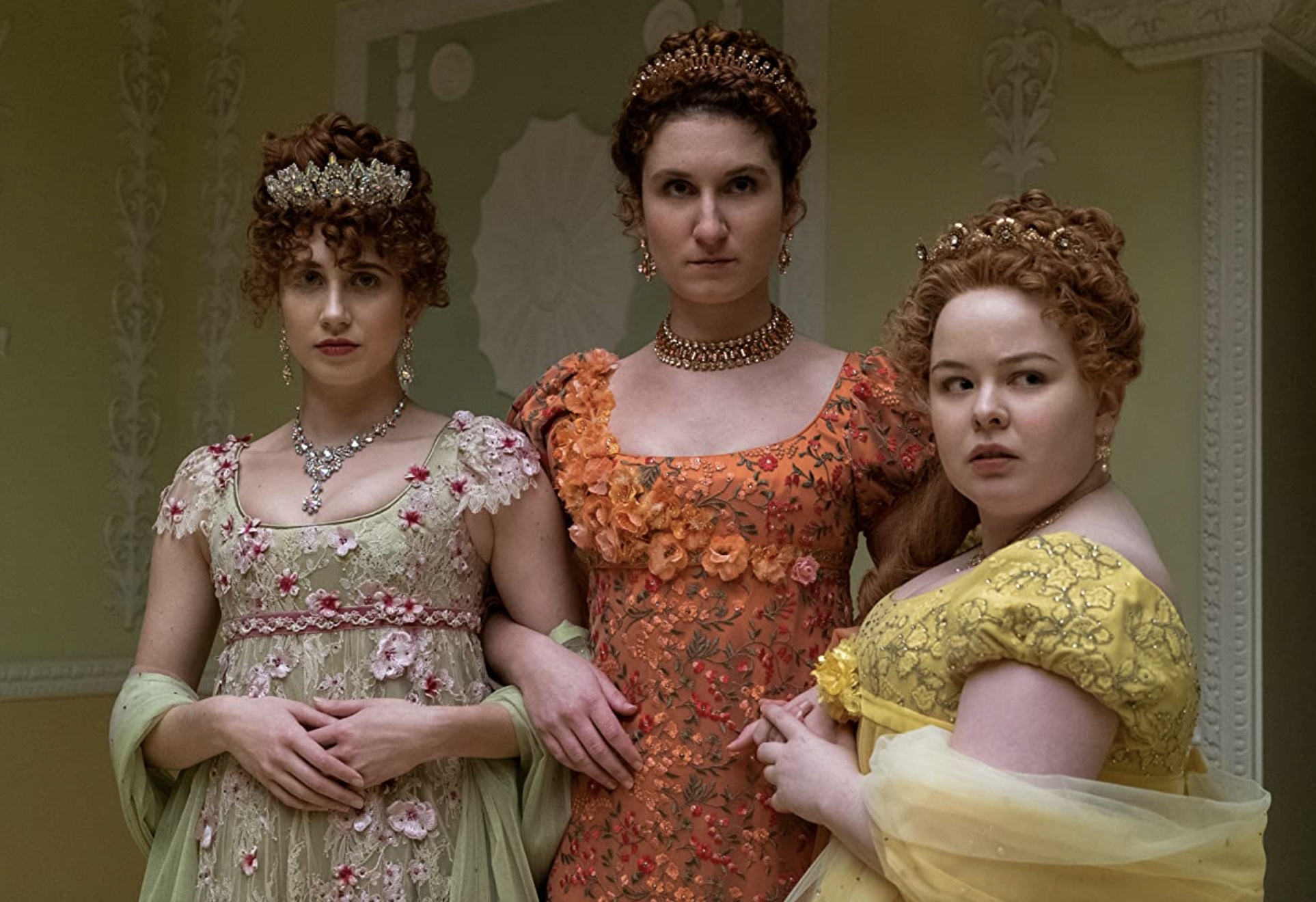 “The Featheringtons are all very colorful,” explains Christine. “They are like the step sisters in Cinderella but the girls are not evil. They are just empty headed.” “Considering their name contains the word feather, a feather aigrette [hair ornament] would be perfect for any one of them,” says Christine. “Above and beyond that so much Georgian jewelry is colorful; there is a lot to choose from for their looks.”

“We have a pair of Renaissance revival earrings that would be perfect for Penelope.” “Our Georgian paste parure with earrings necklace and a brooch would be nice for the matriarch of the Featherington family, Portia.” says Christine. “Paste was a popular type of costume jewelry during the Georgian period. The imitation gems in the jewels are composed of cut glass.” “Cressida is a ‘mean girl’ and Daphne’s ‘competition’ for the duke,” explains Christine. “She isn’t smart, but she is stylish. “Our paste and silver necklace made around 1890 would work well for her.” “Marina arrives as a guest of the Featheringtons seemingly to debut on the marriage market and search for a husband,” explains Christine. “The jewelry she wears, however, reveals her heart is most likely already taken. In an early scene she wears a lover’s eye pendant.

Generally, a lover’s eye jewel depicts a person who is close to the owner’s heart. But there was no explanation about it in Bridgerton. I suspect more will be revealed next season.”

Editorial note: Unfortunately, a picture of this jewel on Marina wasn’t available.

A Boivin Ball Ring I’d Like For New Year’s

Lust: The Secret Language of Flowers In Jewelry