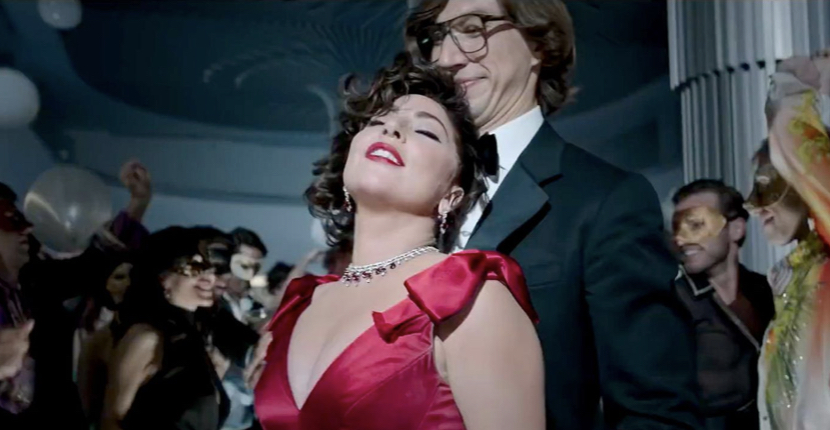 Adam Driver with Lady Gaga who is wearing Bulgari jewelry in 'House of Gucci.' Photo MGM

The star sports masterworks from the Heritage and High Jewelry Collections

August 2, 2021—Lady Gaga serves some wonderfully wicked lines in an Italian accent during the first trailer for Ridley Scott’s House of Gucci. “I don’t consider myself to be a particularly ethical person, but I am fair” is the one that immediately whirled around the internet. Another popular line was the moment when Gaga vows to keep a promise making the Sign of the Cross as she says, “Father, Son and House of Gucci.”

The movie is based on the book, The House Of Gucci: A Sensational Story of Murder, Madness, Glamour, and Greed, by Sara Gay Forde. It revolves around the true story of Patrizia Reggiani and Maurizio Gucci (played by Gaga and Adam Driver) who gained control of the fashion label and spent lavishly and then sold the company over the course of the 1980s and 1990s. “I would rather weep in a Rolls-Royce than be happy on a bicycle,” is one infamous and real-life statement from Patrizia that has as much spice as Gaga’s scripted lines.

As you might imagine, some of the extravagance of the Gucci family is captured with over-the-top ensembles. Costume designer Janty Yates had full access to the Gucci archives. She tossed in some vintage and contemporary clothing from Max Mara and Ungaro, among other labels. And Janty had dresses in the style of Reggiani’s couture recreated.

Jewelry finishes off the lavish looks. While there are a lot of brash baubles you can see in the tantalizing trailer, the most flamboyant are Bvlgari. It makes perfect sense that Bvlgari would be the go-to jeweler for the film. Bvlgari’s larger-than-life colorful creations, similar to Gucci, went beyond the borders of Italy. Bvlgari set the tone of jewelry styles in the 80s and 90s.

A necklace from Bvlgari’s Heritage Collection can be seen on Gaga for a second in the trailer. The masterpiece was made in 1991 and originally owned by the Princess Yasmin Aga Khan, the daughter of actress Rita Hayworth and Prince Aly Kahn. It has specially cut amethysts and citrines set in a triangular pattern punctuated by emeralds, pink tourmalines and sapphires and lit up by diamonds.

The necklace was the hero piece of the 2019 exhibition BVLGARI: The Story, The Dream. The jewel was featured on the cover of the book and the posters for the epic exhibit that was installed in two museums in Rome.

The other big Bvlgari jewels in the House of Gucci trailer are a necklace and coordinated earrings from Bvlgari’s new Le Magnifiche collection. The necklace is set with 11 oval rubies weighing 24.92-carats and 77 round brilliant cut diamonds. The pieces are coordinated with a red dress with big bows on the shoulders. Internet fashion sleuths have figured out the gown is a recreation of a pink silk faille gown with built in corset from Chanel’s 1987 Haute Couture collection that belonged to Patrizia Reggiani.

Get a glimpse of the looks in the trailer for House of Gucci below. The movie is scheduled to be released in the United States on November 24.

The Jewels Ben Affleck Gave Jennifer Lopez for Her Birthday