Sarah Jessica Parker wearing a Solange Azagury Partridge necklace while filming "Sex And The City 2" on the streets of Manhattan in 2009. Photo by James Devaney/WireImage

Remember that episode of Sex and the City when Carrie is trying to buy her apartment and Miranda does a little simple fashion math to inform her where her money has gone? Then Carrie, in her singular way, realizes a down payment on her real estate is in her closet. “I’ve spent $40,000 on shoes and I have no place to live?” she asks rhetorically. “I will literally be the old woman who lived in her shoes.” While the shoe expenditure was impressive, the truth is Carrie could have found a lot more money in her jewelry box.

In celebration of the 20th anniversary of the television series, I am taking a look back at some of the most memorable jewels Sarah Jessica Parker wore in her signature role on the television series and in the Sex and the City movies. The pieces the brilliant costume designer Patricia Field put together for Parker to wear were an amazing blend of emerging designers, big names, uptown and downtown styles. The mix was not only a reflection of Carrie’s character, it made for a fresh look that has not aged since the show aired or the movies premiered. 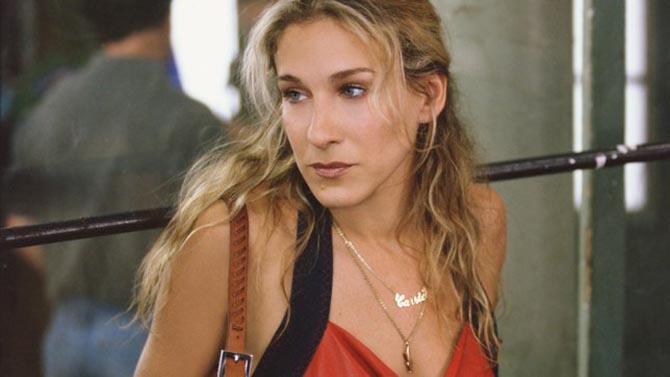 Like a thread line through the series, the Carrie Necklace was something Sarah Jessica Parker wore for years. When she lost the jewel while living in Paris with Aleksandr Petrovsky (Mikhail Baryshnikov), you just knew it was an ominous sign the love affair was doomed. It didn’t even matter that he replaced the piece with a delicate diamond bead necklace. The Carrie Necklace was sentimental. Patricia Field told me when I interviewed her a few years ago, the jewel was inspired by the script necklaces shoppers at her East Village boutique had been wearing. Pat still sells the style online. 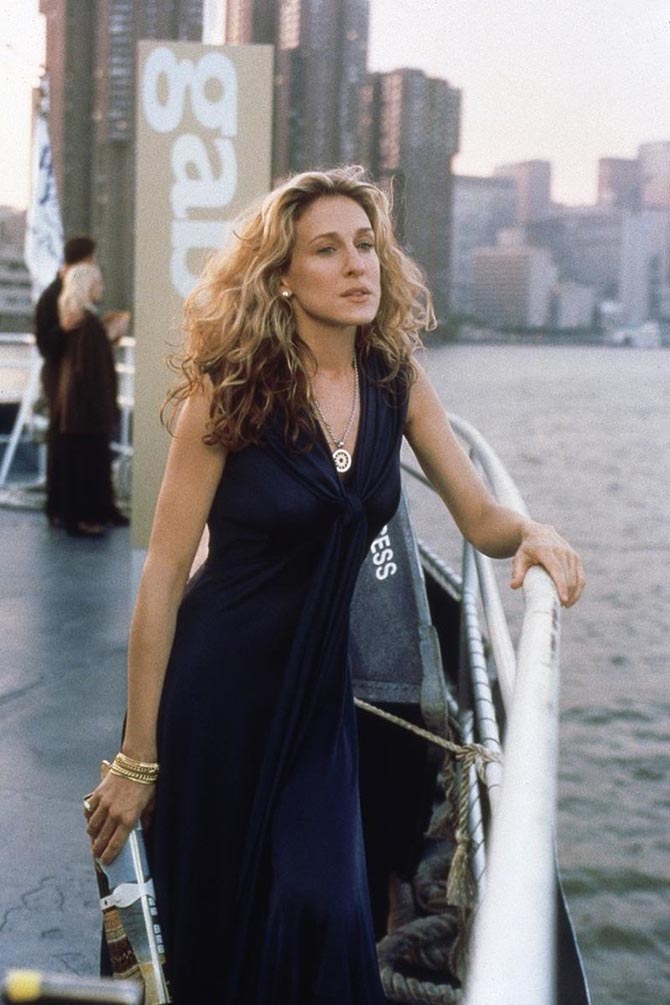 There was a period around Season 3 when Carrie began to wear a lot of Bulgari gold jewelry. One of the pieces she had on repeatedly was the Tondo Necklace on a gold chain. She also sported a Bulgari-Bulgari 18K gold watch steadily during the same period. For those tabulating the value of the jewels, when I wrote about the timepiece for InStyle in 2000 it cost $18,200.

Most women who truly love jewelry like Carrie Bradshaw have costume mixed in with their treasures. Pat Field sourced lots of interesting pieces for the show from Kenneth Jay Lane. The most memorable was the filigree gold tone butterfly necklace Sarah Jessica wore during Season 3. The piece made famous by the show is still widely available today for $138. 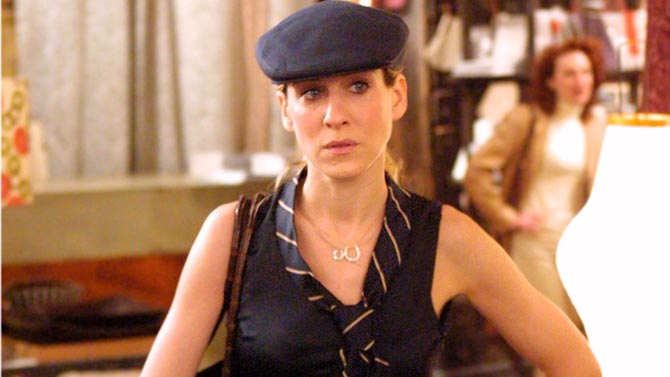 In Season 4 Pat Field called in the entire jewelry collection from Mia & Lizzie, a young design team. Their diamond horseshoe necklaces that retailed for around $2,000 made the cut. “Sarah Jessica liked the horseshoe because it was feminine, and as a fan of vintage, she loved our take on the Victorian charm,” Lizzie Scheck told me at the time. As a matter of fact, the designers were thinking of Parker when they created it, explained Mia Koniver. “We’re such fans of her style. She inspires us.” Sarah Jessica wore the pieces repeatedly on the show. 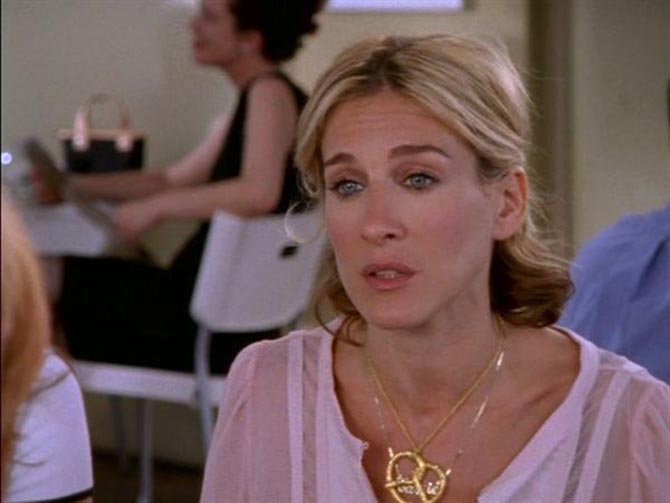 Sarah Jessica Parker often spoke of New York City as being one of the most important characters in Sex and the City. She symbolically showed her love for Gotham when she wore Yossi Harai’s gold pretzel necklace studded with diamonds intended to look like salt. The twisted bread sold on the street corners in midtown Manhattan is a culinary symbol of the city like coffee in a paper cup or a slice of pizza. 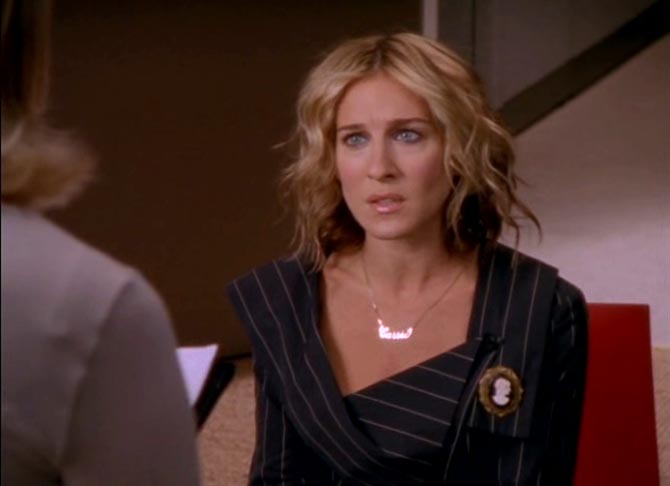 Sarah Jessica Parker had a meeting at Vogue wearing her Carrie necklace and a cameo pin. Photo

Pat Fields imaginative way of blending something old and something new was perfectly captured in Carrie’s meeting with a Vogue editor during Season 6 of Sex and the City. For the appointment Sarah Jessica wore a pinstripe suit by Vivienne Westwood with her Carrie necklace and a large vintage cameo pin. 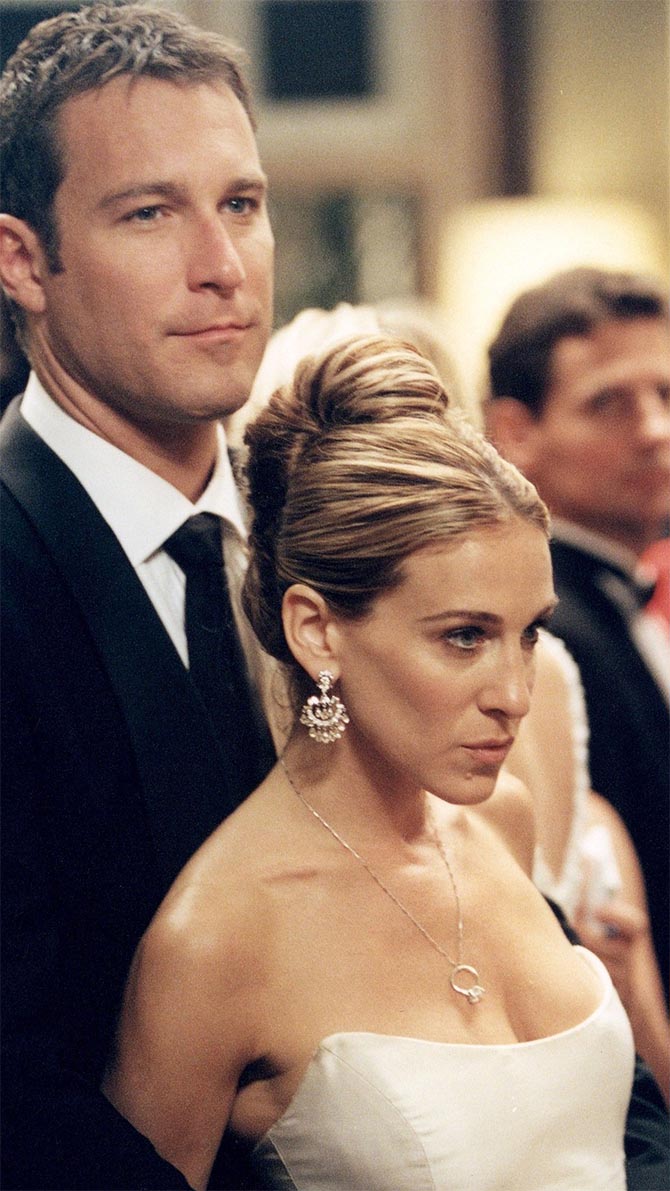 During the heyday of Sex and the City, indeed to this day, the way Sarah Jessica Parker dresses in real life was more or less the same as Carrie. She wore the Fred Leighton diamond chandelier earrings from Season 4 repeatedly on the red carpet. Only Carrie Bradshaw, however, would take a stunning Asscher Cut Diamond Ring and toss it on a simple necklace. At the time she told her fiancé Aidan it was “closer to her heart,” but we all knew she wasn’t ready to walk down the aisle. 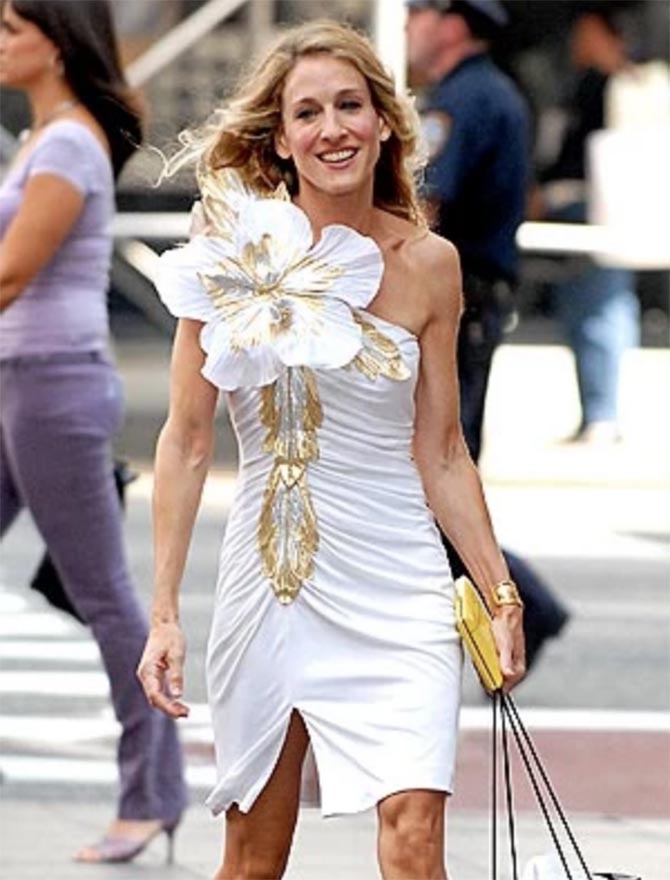 The opening scene of the Sex and the City movie echoed a thought so many people had about Carrie Bradshaw. She was like a modern-day Audrey Hepburn in Breakfast at Tiffany’s. Sarah Jessica’s voiceover played while she took a stroll around the landmark store wearing a Eugene Alexander dress and a gold Elsa Peretti for Tiffany Bone Cuff. 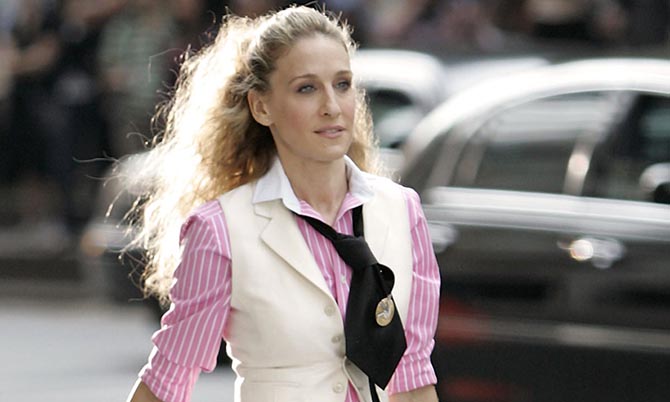 Menswear made feminine with jewelry was an ongoing theme in the Sex and the City costumes Pat Field put together. For the Sex and the City movie, Sarah Jessica Parker’s tie was pinned up with an epic Verdura gold and diamond Target Brooch. The $23,500 jewel was originally created in 1940 and worn by New York society ladies Millicent Rogers and Dorothy Paley who were the Carrie Bradshaws of their day. 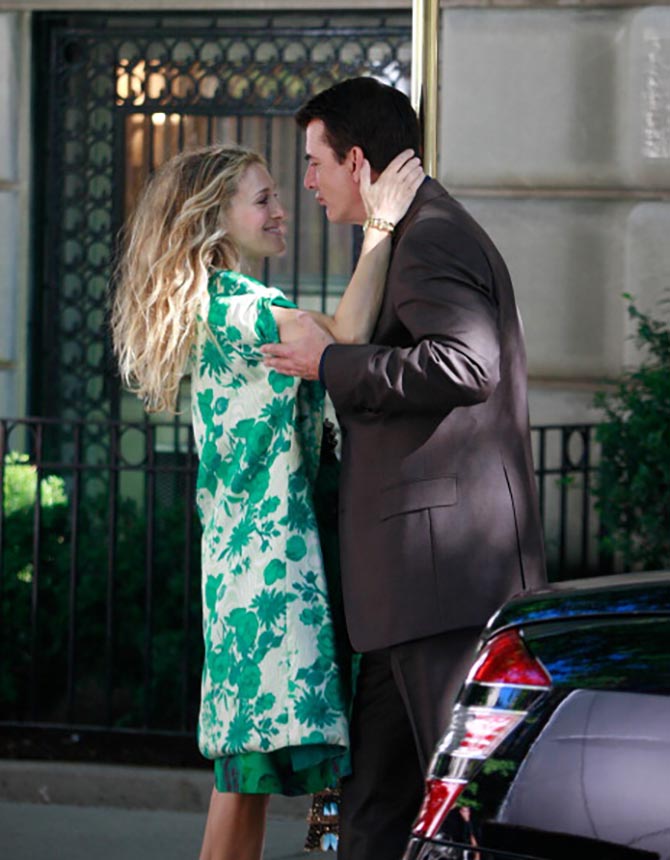 In the first movie, Sarah Jessica wore a Verdura Curb-Link Bracelet with a green printed coat and dress. The classic jewel was originally designed in 1941 and worn perpetually by silver screen star Greta Garbo. 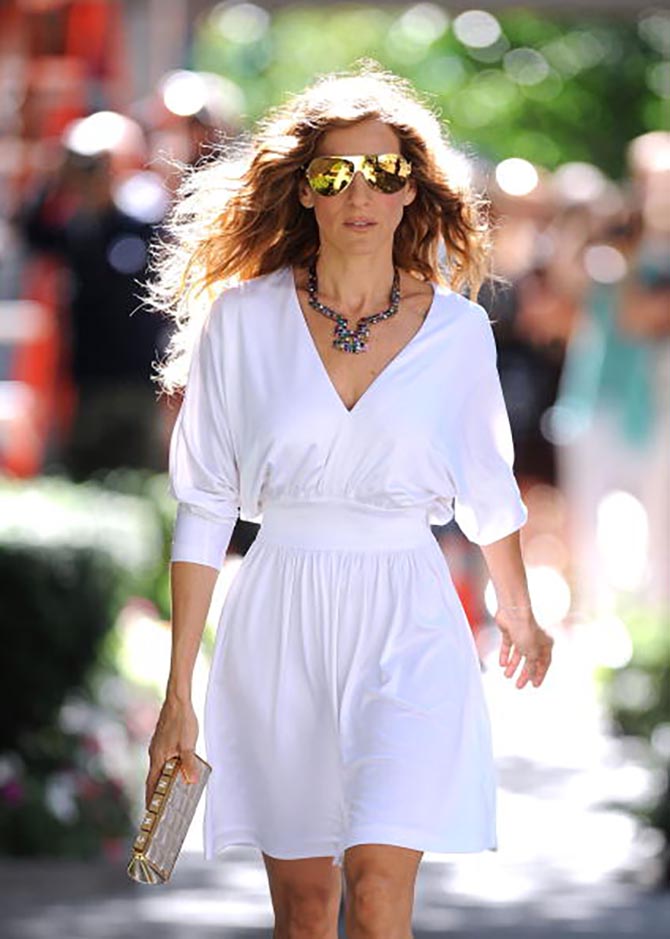 In the second Sex and the City movie, Pat Field paired Solange Azagury-Partridge’s magnificent Random Necklace with a simple white dress and gold aviators creating the iconic image of Sarah Jessica Parker for the production. The jewel, that has the same silhouette in front as a Space Invader from the old video game, is set with square and princess-cut diamonds, emeralds, amethysts, rubies, black spinel and yellow, blue, orange and pink sapphires in blackened 18K white gold.  The price is upon request, which means it probably costs about as much as an apartment in New York City. 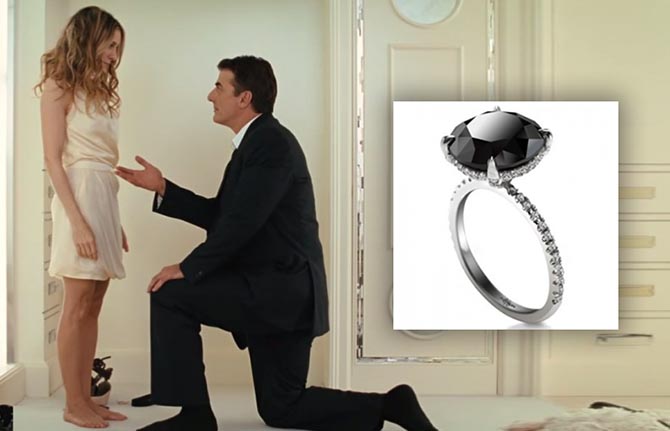 When Mr. Big finally presents Carrie with an engagement ring, a proposal years in the making, the jewel is totally unique. He says “because you are not like anyone else” as he gives her a 5-carat black diamond set in a white diamond and 18K white gold ring. The Italy Malkin jewel was chosen from any number of designs from countless designers that were submitted for the proposal scene by Sarah Jessica Parker, the writer and director Michael Patrick King and, of course, Pat Field.

A Look Back At Ellen Barkin’s Jewelry