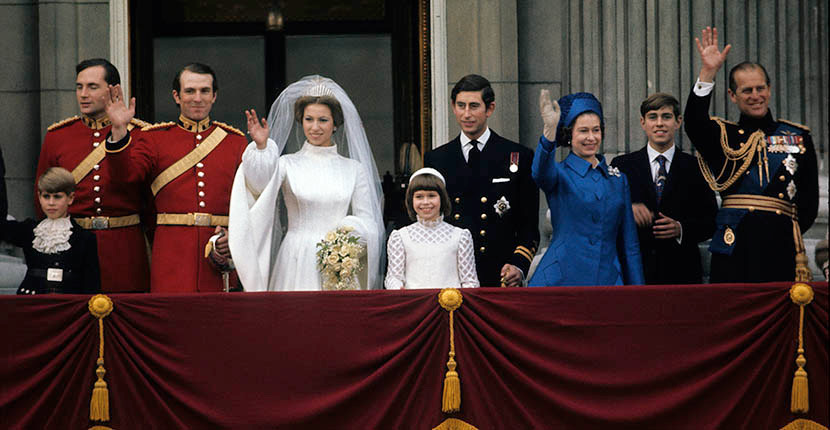 After their 1973 wedding, Princess Anne and Captain Mark Phillips as well as Queen Elizabeth, Prince Charles, Prince Philip and other members of the royal family and wedding party waved to the crowds from the balcony of Buckingham Palace. Photo Getty

All the Details on Princess Anne’s Chic Wedding

Princess Anne literally storms into her first important scene of The Crown in Season 3, Episode 4 and steals it. The perfectly cast actress, Erin Doherty, who only has cameos throughout the rest of series gives a masterclass in unimpressed faces when she is speaking or just seen on camera. She serves up sarcasm with style to the senior members of the family and is foxy with every man who crosses her path. She drives into her last important scene, that goes down in Episode 9, singing along to David Bowie’s Starman. I know I am not alone when I say, I wish there had been a lot more of Anne.

Extraordinary things happened to Princess Anne during the timeframe when Season 3 takes place from the late 1960s to 1977. A little action-movie energy could have been added to the drama with the story of the attempted kidnapping of the royal in 1974. An episode could have dealt with Anne’s achievements as an equestrian. She competed with the British team in the 1976 Olympics in Montreal. 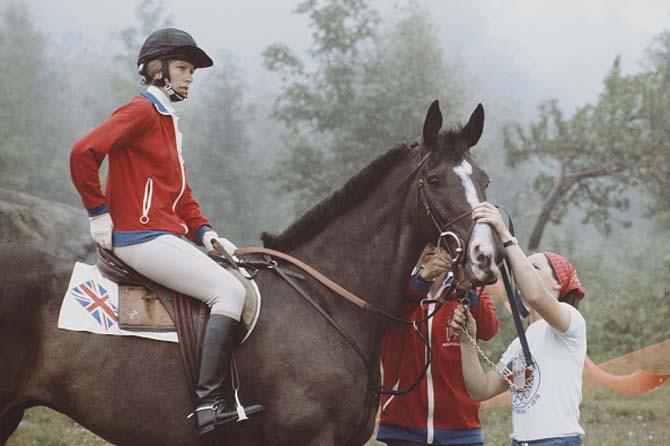 The equestrian episode could have covered her romance and wedding to Captain Mark Phillips. The couple met in 1968 and bonded over their mutual love of horses. They announced their engagement on May 29, 1973. During the official photocall, which one suspects Anne did not relish, she showed the press her engagement ring from Garrard.

The design featured a round sapphire center stone flanked by two round diamonds. The carat weight of the gems has never been revealed, but the jewel was significantly smaller than the flashy sapphire Princess Diana received from Prince Charles in 1981 and Kate Middleton wears today. Anne’s comparatively modest jewel was respectful of the financial hard times the country was experiencing when she was engaged as well as a reflection of her sporty lifestyle. 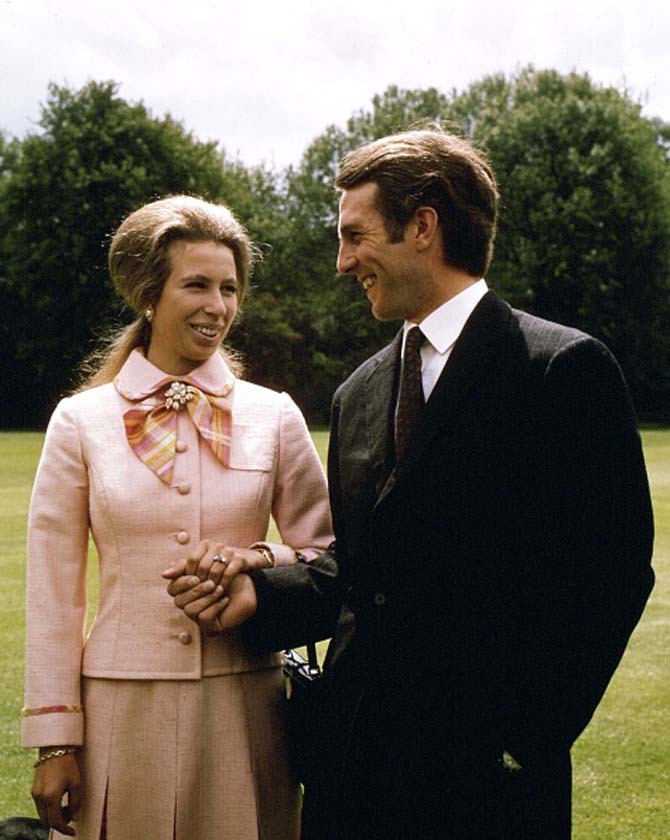 Princess Anne wearing her sapphire and diamond engagement ring from Captain Mark Phillips for a meeting with the press at Buckingham Palace on May 30, 1973 the morning after their engagement was announced. Photo Getty

For the couple’s royal wedding at Westminster Abbey on November 14, 1973, the princess wore a Tudor-inspired gown by Maureen Baker, the chief designer at Susan Small. It had a high-neck and long dramatic foresleeves and cuff sleeves. Anne secured a veil to her updo with Queen Mary’s Fringe Tiara.

The tiara is the same one Queen Elizabeth wore at her 1947 wedding to Prince Philip. It was created in 1919 for Queen Mary by the manufacturer E. Wolff & Co. who worked for Garrard. The popular Fringe style was loosely inspired by kokoshnik headdresses and jewels made for Russian nobility. According to Hugh Roberts, the author of The Queen’s Diamonds, the gems in the Fringe Tiara were taken from a jewel Queen Victoria gave Mary as a wedding present. 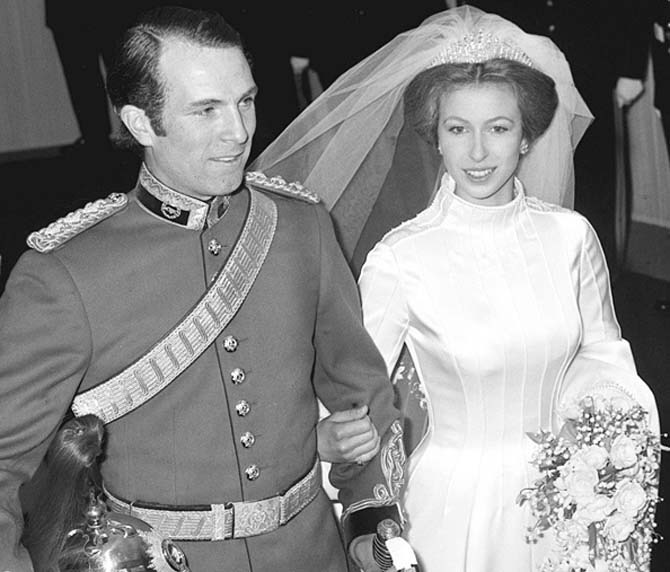 The Fringe Tiara measures 2.5 x 7.4 inches. It has 47 graduated brilliant and rose-cut diamonds set in tapering bars, divided by 46 narrow diamond studded spikes. It is composed of silver topped gold. Like most tiaras made during the period, it can be taken off of its frame and worn as a necklace. The convertible feature caused a mishap during Queen Elizabeth’s wedding. 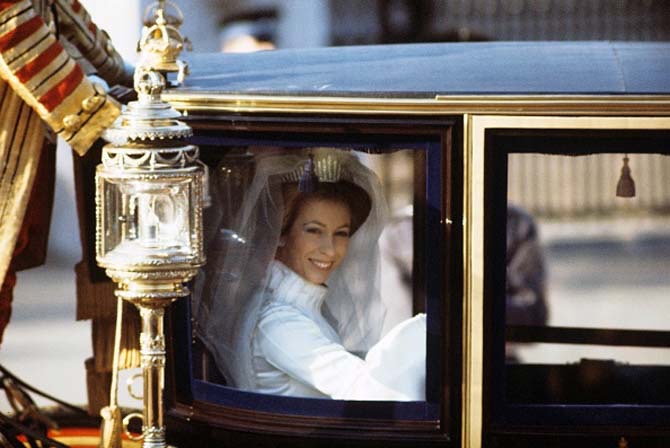 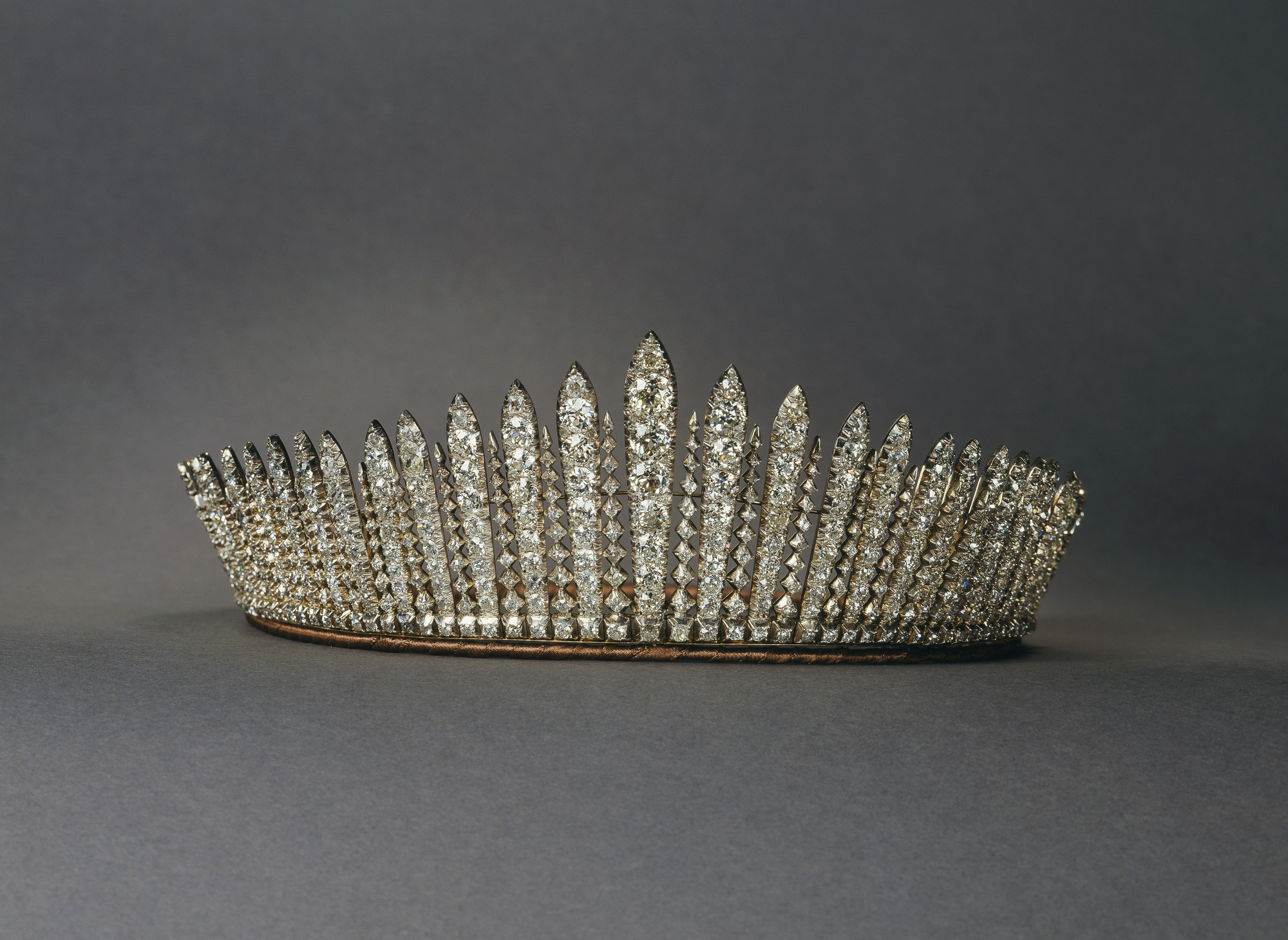 The marriage of Princess Anne and Mark Phillips ended in divorce after a long separation in 1992. The same year she entered into a happy union with Timothy Laurence who had been her mother’s equerry. Anne’s second wedding was a private affair attended by around 30 people. While the romance may not have had the public glamour of her first wedding, I am sure I am not alone in hoping the story of the union, if not other details about Anne’s life feature into future episodes of The Crown.

Helena Bonham Carter Wore Her Own Jewels In ‘The Crown’