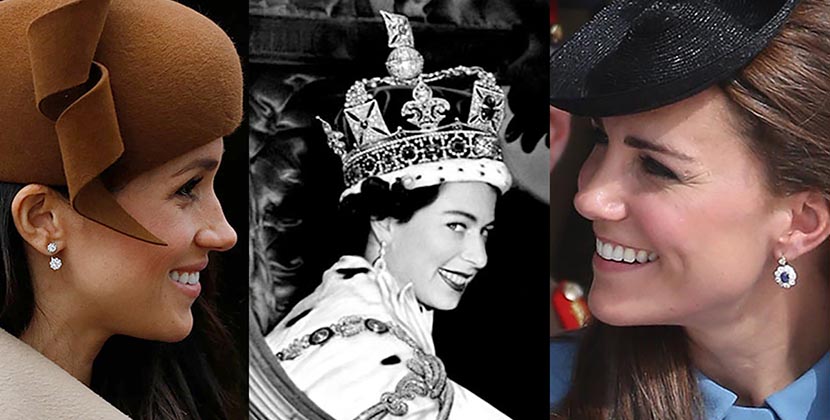 The royal engagement, ‘The Crown’ and so much more

If The Crown has taught us anything, it’s that the popularity of the British Royal Family ebbs and flows. In 2017 the interest in English nobility was, metaphorically speaking, flooding over the River Thames.

At The Adventurine, we covered all of the news from the jewelry angle. Links to our stories are below.  Next year with the royal wedding of Prince Harry and Meghan Markle on May 19 promises to be even better and we can hardly wait. 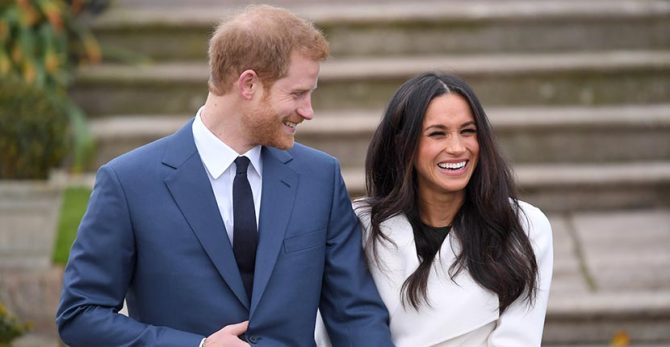 Prince Harry and Meghan Markle officially announce their engagement to the press at Kensington Palace. Photo by Karwai Tang/WireImage

It was the best kick off to engagement season ever. On November 27, 2017, Clarence House put out a statement that read, “His Royal Highness the Prince of Wales is delighted to announce the engagement of Prince Harry to Ms. Meghan Markle. The wedding will take place in Spring 2018.” At the official photocall at Kensington Palace, Meghan gave the public the first look at the ring Harry designed with one of the Queen’s jewelers… Read more 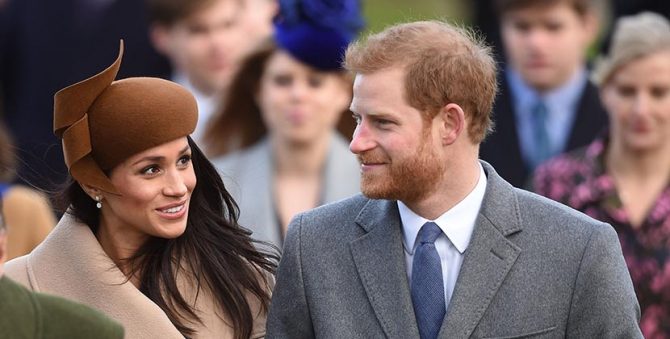 On Christmas Day, Meghan Markle joined Prince Harry and the royal family for a service at St. Mary Magdalene Church in Sandringham. For the traditional event the American actress added a bit of sparkle. Diamond earrings, from the Canadian jeweler Birks, lit up her neutral toned ensemble… Read more 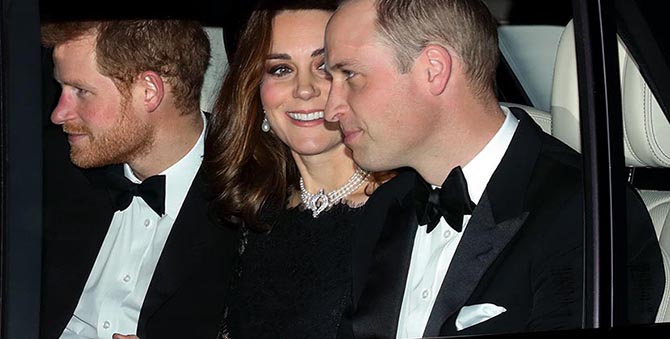 Kate Middleton may have access to one of the best jewelry collections on the planet but historically she has chosen to wear jewelry from her personal collection unless it’s a state occasion. Well in 2017 she begun to dip into the royal treasury slightly more frequently. Some professional royal watchers have hypothesized that it’s part of a royal makeover… Read more 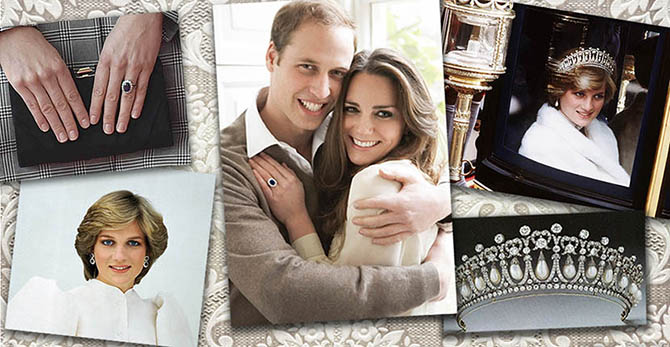 Contributor Caroline Dweck took a look at how Kate Middleton pays tribute to Diana with jewelry. She did so before this summer marking the 20th anniversary of Diana’s death and she will surely pass the tradition right on to Princess Charlotte. Of course, Kate’s everyday Diana jewel is her beautiful engagement ring, but there are also several other stunning pieces… Read more 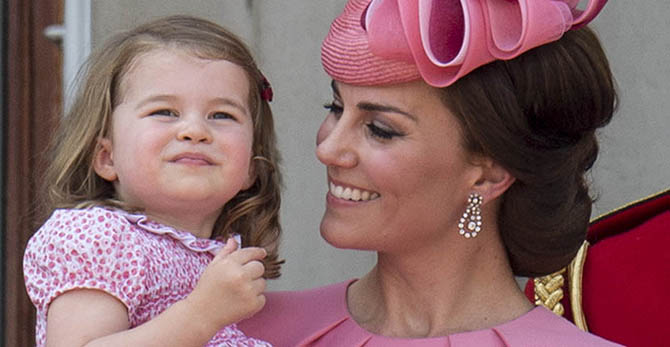 Princess Charlotte and Catherine, Duchess of Cambridge wearing antique earrings for the 2017 Trooping of the Colors Photo Mark Cuthbert/Getty

At the Trooping of the Colors on June 17, 2017, when the entire royal family gathered together on the balcony at Buckingham Palace to watch the pageantry of the parade, Kate Middleton looked sensational in a millennial pink Alexander McQueen dress and elaborate updo that created the perfect canvas for a pair of antique diamond earrings… Read more 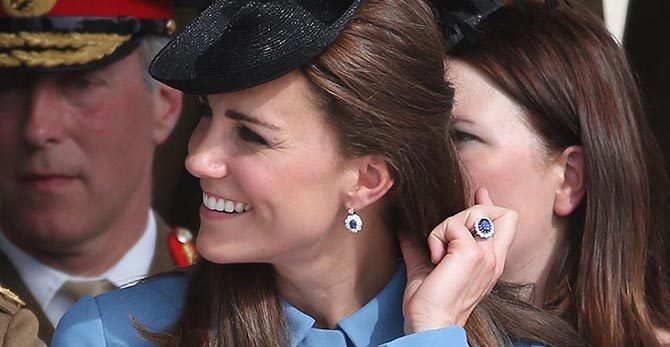 In honor of Prince Harry and Meghan Markle’s engagement we took a look back at Kate Middleton’s engagement ring that once belonged to Princess Diana and uncovered 10 things you may not know about the jewel. While the design is instantly recognizable all the many stories behind it are far from common knowledge. Indeed, some facts surrounding the engagement ring are a mystery… Read more 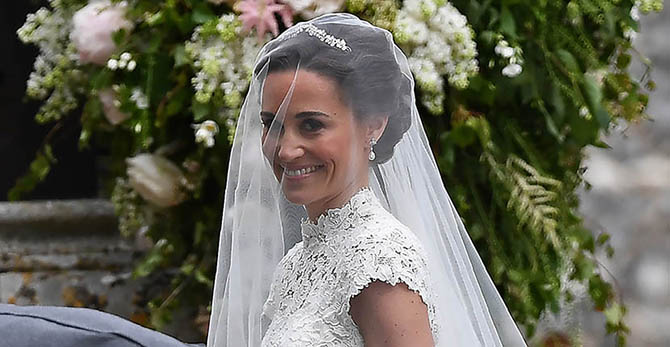 Pippa Middleton’s wedding to James Matthews on May 20, 2017 may not have been a royal wedding but it felt like one. The bride dazzled the crowds and press in a lace gown by Giles Deacon with a high neck and cap sleeves.  Her updo was accented by a Maidenhair Fern tiara and her earrings that could have been her ‘something old…’ Read more 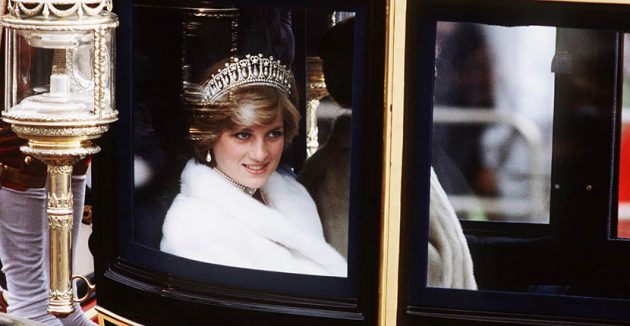 It seems almost impossible that 20 years have gone by since Princess Diana died at 36-years old in a car accident in Paris.  To mark the somber anniversary, the royal family celebrated her life with various activities throughout 2017. One of the most highly publicized events was the exhibition Diana: Her Fashion Story at Kensington Palace. The presentation got us to thinking about Diana’s jewelry style. While all the reviews of the exhibit mention how her clothes changed from demure designs, at the time she married Prince Charles in 1981 at the tender age of 20, to confident glamour looks, her taste in jewelry remained more or less the same… Read more 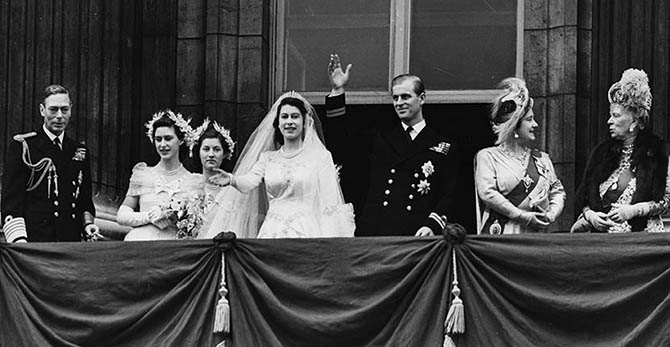 Princess Elizabeth and Prince Philip with the royal family on their wedding day. On the left is King George VI, Princess Margaret. On the right are Queen Elizabeth, Queen Mary Photo Popperfoto

One of the many fabulous things about the Netflix historical drama The Crown is all the behind the scenes views of royal family life. In the first episode of Season 1, ‘Wolferton Splash,’ the politics surrounding young Princess Elizabeth’s wedding to Prince Philip and her steely resolve play into the plot. What was left out of the story was the drama surrounding her engagement ring and wedding jewelry. We covered it in detail… Read more 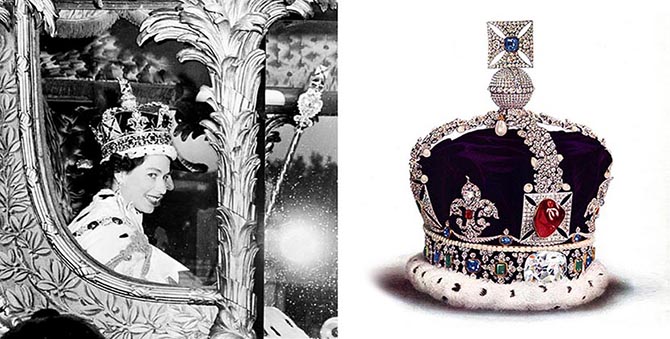 Queen Elizabeth II in the royal carriage wearing the Imperial State Crown after her coronation on June 2, 1953 and a rendering of the crown. Photo STF/AFP/Getty Images

In anticipation of season 2 of The Crown, which began streaming on December 8, 2017, we took a closer look at the Imperial State Crown of England. Featured dramatically in the opening credits of every episode, it is at once a physical symbol and a metaphor of the British monarchy… Read more It’s not exactly a spoiler to reveal Princess Margaret finally makes it to the alter in The Crown. Even if you haven’t watched Episode 7 of Season 2 yet, you are probably aware the rebellious sister of Queen Elizabeth married photographer Tony Armstrong. What might come as a complete shocker—facts that are not reviewed in the Netflix series—is that the tiara Princess Margaret wears for her wedding was bought shortly before the occasion… Read more The Duke and Duchess of Windsor on their wedding day June 3, 1937 Photo Getty

In celebration of the Duke and Duchess of Windsor’s wedding, 80-years ago on June 3, 1937, we took a look back her engagement ring which was really a rebellious jewel… Read more 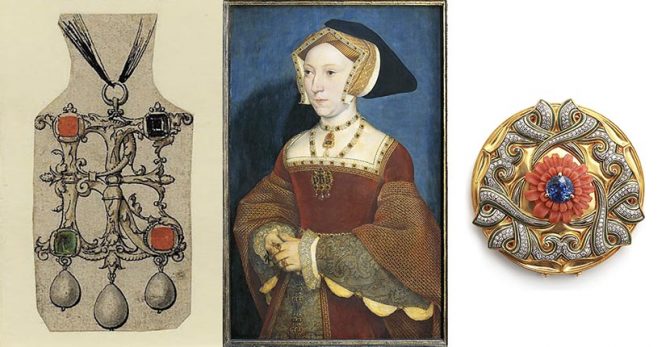 While researching the provenance of a fifteenth-century drawing in the collection of the British Museum, contributor Emily Selter came across one of the most famous items in the institution’s Prints and Drawings department, the ‘Jewellery Book’. She was intrigued by the name of the volume, and learned that it contained drawings of jewels that were designed under the patronage of King Henry VIII by the artist Hans Holbein, the monarch’s favorite jeweler… Read more