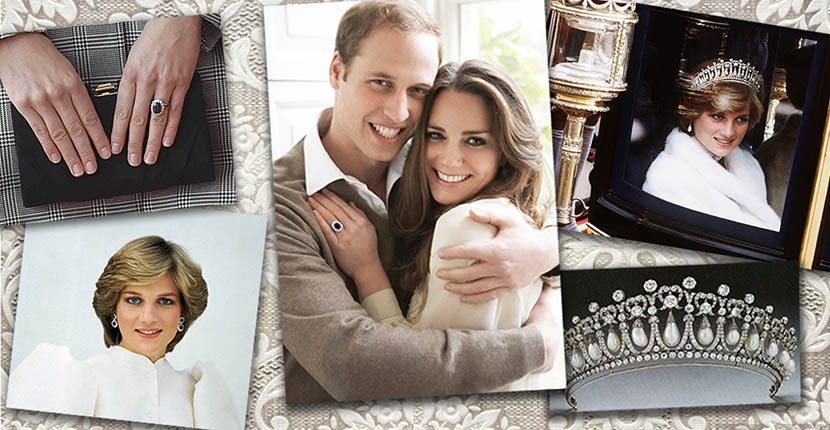 When news broke a couple of weeks ago that Pippa Middleton had given Kate an engraved pendant in 2013 to celebrate the birth of Prince George from the same jeweler, Merci Maman, and in a similar style as a piece Prince Charles gave Diana when William was born, it literally made headlines around the world. (Read the jeweler’s blog post that started the excitement here.)

Well, the fact is Kate Middleton pays tribute to Diana constantly with her jewelry. She did so before this summer marking the 20th anniversary of Diana’s death and she will surely pass the tradition right on to Princess Charlotte. Of course, Kate’s everyday Diana jewel is her beautiful engagement ring, but there are also several other stunning pieces. Following are details about Diana’s jewels that Kate wears most frequently with a little bit of history on each one. 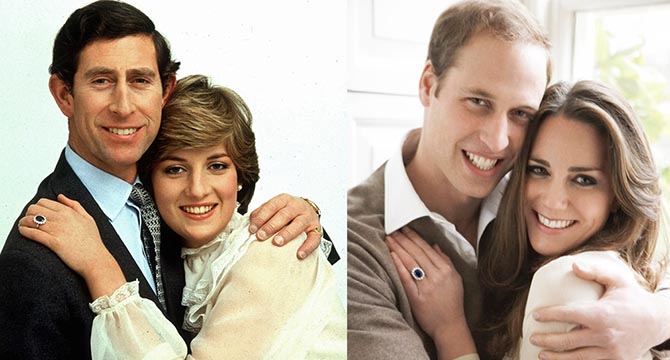 Official engagement portraits: Charles and Diana in 1981 and William and Kate in 2010. Diana’s sapphire and diamond engagement ring from Garrard shines in both images. Photo Getty

Diana’s most iconic jewel was the engagement ring she received from Prince Charles during a romantic candlelight dinner at Buckingham Palace in 1981. While it is customary for royal brides to have a bespoke ring made, Diana broke with that tradition when she chose from a tray of rings by the crown jeweler Garrard.

There are a few theories on why she passed on a traditional diamond engagement ring and went with the 12-carat oval blue sapphire surrounded with a halo of 14 diamonds. Some believed the queen actually chose the ring as the best jewel for Diana. Others theorize Diana selected the sapphire because it matched her eyes and she loved the stone. Diana herself was quoted as saying she picked her ring from the tray “because it was the biggest.”

The design of the ring was inspired by a sapphire and diamond brooch presented to Queen Victoria by Prince Albert in 1840 on the day before their wedding.

When Diana died in 1997, the ring was given to Prince Harry who gave it to William for Kate Middleton in 2010. At the announcement of the couple’s engagement, William told the press, “As you may recognize now, it’s my mother’s engagement ring and it’s very special to me, as Kate is very special to me. It was only right the two were put together.” 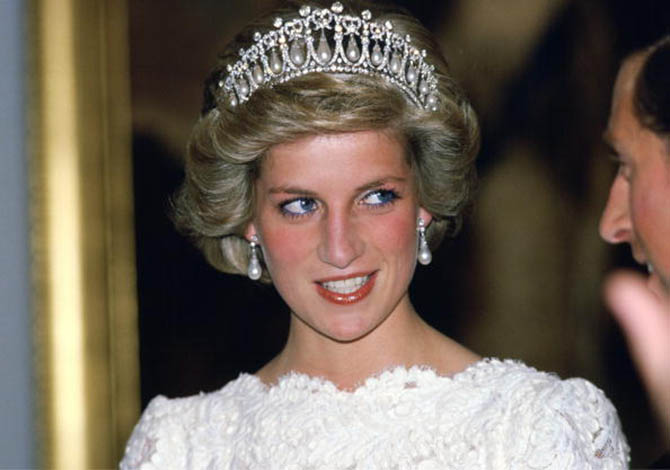 Princess Diana wearing the Cambridge Lover’s Knot Tiara and earrings by Collingwood Jewellers on November 11, 1985 in Washington, D.C. at a reception at the British Embassy Photo by Tim Graham/Getty Image

The Cambridge Lover’s Knot Tiara was one of Diana’s favorite formal pieces. She paired it with pearls and white gowns for a very modern regal effect on several official trips. The history of the jewel extends back to Queen Mary who originally commissioned the stunner in 1914 from Garrard.  It was modeled after a Gothic Revival tiara owned by her grandmother, Princess Augusta of Hesse, the Duchess of Cambridge. The neo-classical design has 19 openwork diamond arches, each enclosing an oriental pearl drop from a diamond lover’s knot bow surrounded by single diamonds. 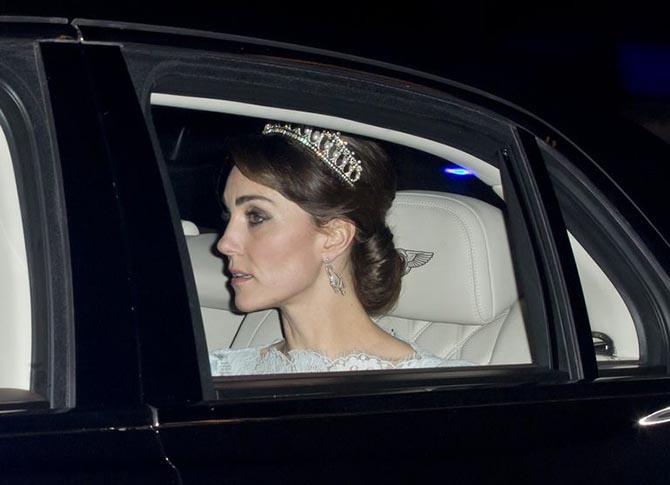 Kate Middleton wearing the Cambridge Lover’s Knot Tiara to a reception in December, 2016.

Queen Mary left the tiara to her granddaughter, Queen Elizabeth. In 1981, the queen gave the tiara to Diana on a sort of permanent loan among her wedding presents. When Diana and Charles divorced in 1996, the piece was returned to the royal family’s jewelry collection. Now, the tiara has come back into the public eye on Kate who has worn it on multiple occasions. 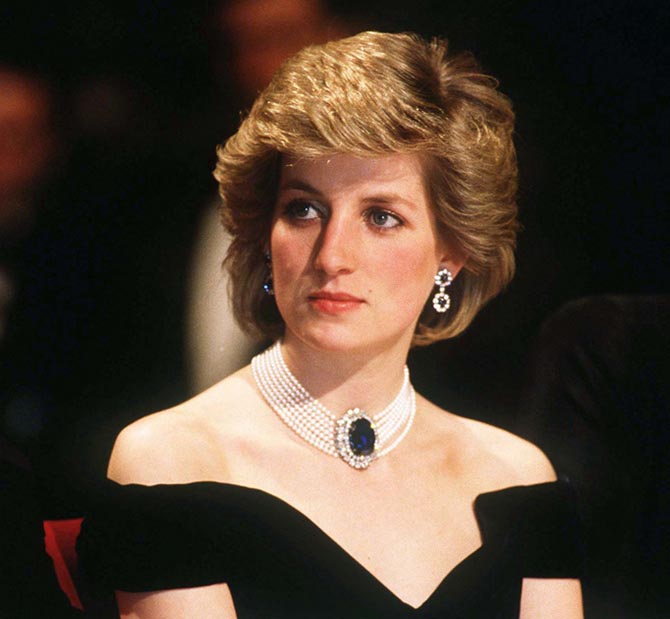 Diana wearing her double drop sapphire and diamond earrings and sapphire and pearl choker in October, 1986. Photo by Anwar Hussein/WireImage

Diana loved sapphires.  Among her favorite pieces with the blue stone were her oval sapphire and diamond double drop earrings. They matched her engagement ring, striking blue eyes and stood out against her cropped blonde hair.

Kate received Diana’s diamond and sapphire earrings from Prince William shortly after their 2011 wedding. They were refashioned into single drop earrings suspended from a diamond lever. The Duchess wore them on the first of many occasions for the couple’s official portrait for their 2011 North American tour. 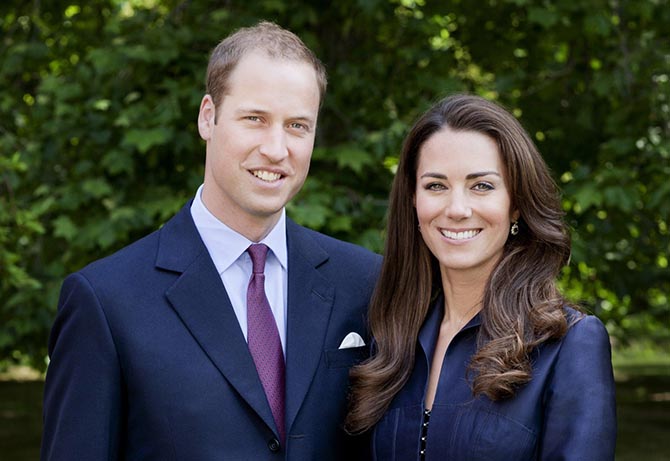 The Duke and Duchess of Cambridge’s official portrait for their 2011 North American tour. Kate is wearing the altered rendition of Diana’s sapphire and diamond earrings. Photo by Chris Jackson/Getty Images for St James’s Palace

Perhaps the most personal piece Kate has worn from Diana’s collection is her pearl bracelet. It is believed Diana commissioned the triple strand pearl bracelet with circular stations from the British crown jeweler Nigel Milne in 1988. Famous for her love of pearls, Diana wore this bracelet on multiple occasions. Perhaps the jewel’s most high-profile appearance on Diana was during the 1989 royal tour of Hong Kong when she paired it with the Catherine Walker outfit dubbed the ‘Elvis Look.’

The bracelet was spotted in July on Kate for the first time during the royal tour of Germany.  It was a touching tribute to her late mother-in-law among all the summer of 2017 celebrations of Diana’s life marking the twentieth anniversary of her death. 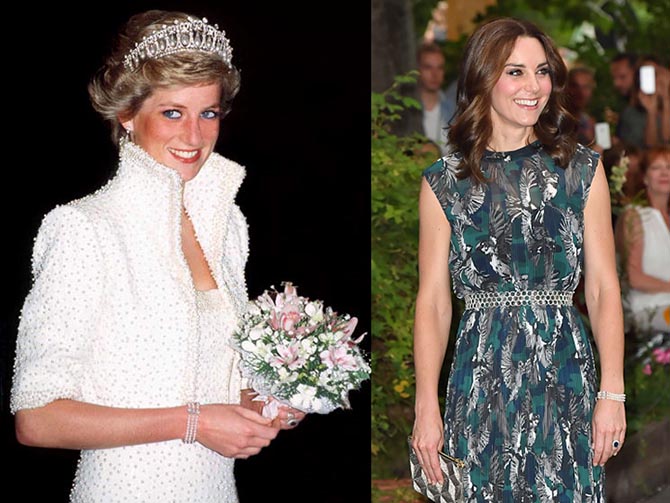