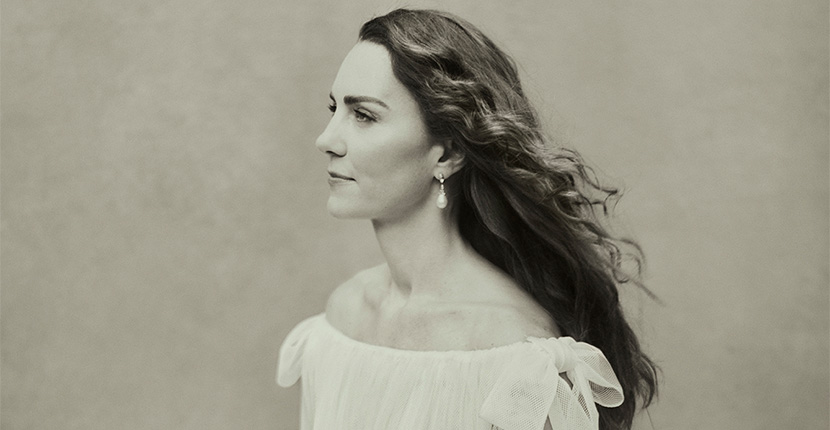 January 9, 2022—I have often quibbled about Kate Middleton’s low-key jewelry ways. The future Queen has full access to one of the greatest and most expansive collections on the planet, yet she barely bothers to put any of it on, even for important occasions.

Recently, for example, she wore costume to the premiere of No Time To Die. (It felt like she was trying to kill me.) Way back in 2016, she tossed on a pair of $100 earrings with one of the Queen Mother’s diamond jewels at a royal reception. (I am still not over it.)

My problem with these jewelry offenses is not some old idea of etiquette. It’s that these types of choices don’t draw the thread-line through the royal family’s history that the antiques do when they are worn. I think I speak for many when I say it would be nice to see more pomp in her circumstance.

Anyway, I am calling a truce on my grievances for Kate’s 40th birthday today. To celebrate the milestone, Kensington Palace released three official portraits of Kate taken by Paolo Roversi. Even though they are light on the jewelry, they are also dreamy. I do wish she had worn a tiara in at least one of them, but there you have it.

Find out about the jewels Kate wore in the photos below.

This breathtaking black and white image reminds me of the 19th century photos of the royal family but it has a lot more movement.

It’s a lovely detail the way Kate is delicately holding a ribbon from her Alexander McQueen dress. The gesture highlights her sapphire and diamond engagement ring that (of course) originally belonged to Diana.

Kate also has on the pearl and diamond pendant earrings the London jeweler Collingwood gave to Princess Diana as a wedding present in 1981. Kate has worn the earrings many times over the years. They were among Diana’s favorite jewels.

The forward glance in the black and white series of images just shows the pendant part of the Collingwood pearl earring and a very joyful moment.

All of the images seen here, which were taken in Kew Gardens, are going to become part of the National Portrait Gallery. The Institution where the Duchess is a patron also houses images of Diana. In one taken by Terence Donovan in 1990, the jewelry loving Princess paired the same earrings Kate is wearing with the Lover’s Knot Tiara. (Clearly, it’s hard to call a truce.)

Kate paired a red Alexander McQueen gown with antique diamond earrings from the Queen’s collection for the image above. These earrings have been in Kate’s main rotation of jewels for years. While I have never come across the exact acquisition story of the designs, they appear to be from the Georgian or Victorian era.

Kate looks spectacular in them and they bring a little bit more umph to her style then small jewels she wears so often. (I know, I am still quibbling.)