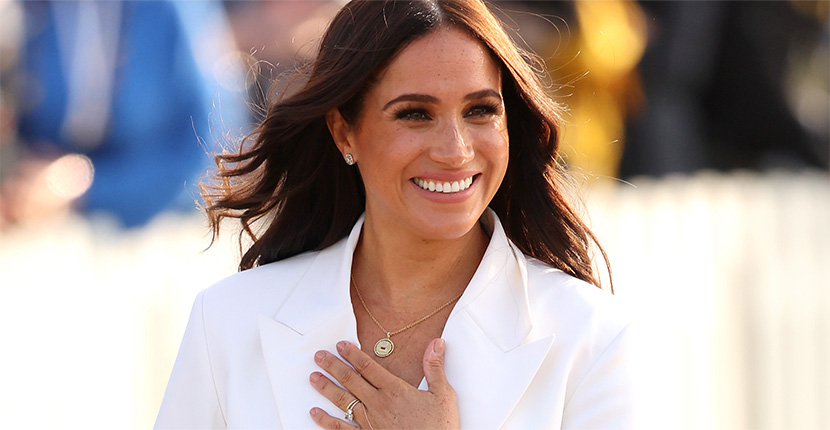 April 16, 2022—I am not sure anyone has ever quite expressed so much of their life story in jewels the way Meghan Markle did when she hit the yellow carpet at the Invictus Games in the Netherlands yesterday. I am not exaggerating here.

Through her jewels, set against the backdrop of a white Valentino suit, the Duchess managed to bring in her life and style before marrying Prince Harry, acknowledge key parts of her royal experience, and express the sentiment of her love story as well as the charitable component of this new chapter that defies categorization. Let’s map it out.

The Galanterie de Cartier studs were a wedding gift Meghan debuted in 2018 a few weeks in advance of her royal wedding. I remember it vividly because I thought they were a touch more formal than the jewelry she had been wearing.

I went so far as to predict she was wearing her wedding earrings in a story. I was right about it and wrote another story (okay it was a victory lap) diagraming how I knew she would wear Cartier on her wedding day.

On her wrist, Meghan is sporting a gold Cartier Tank Française. Many believe this is Princess Diana’s watch and a gift from Harry. I believe that is the case because, as I am pointing out here, Meghan messages with her jewelry and bringing up Diana is always a winning move.

Some have quibbled Meghan’s watch might be the timepiece she bought herself when she was filming Suits. According to reports, however, that watch is a two-tone steel and gold model.

The wispy gold chain covering Meghan’s hand is a Kitten Mitten from Catbird in Brooklyn. The $238 bit of chain feels like an act of defiance against the royal etiquette code of dress Meghan had to follow when she was an HRH living in London. Always loyal to the designers she loves, Catbird was responsible for the little thread rings Meghan routinely wore before she was married.

Naturally, Meghan is wearing her three-stone diamond engagement ring. The jewel, which was redesigned by Harry and Lorraine Schwartz while Meghan was pregnant with Archie, ignited a round of ridiculous outrage. Even some royal reporters bizarrely acted as though the couple, or more specifically Meghan, had altered a crown jewel. They somehow completely forgot about the long history of royalty altering personal pieces in their collection.

The engagement ring is paired with Meghan’s wedding band made of Welsh gold and gifted by Queen Elizabeth.

As far as I know the Love Pendant necklace by Sophie Lis is a new jewel for Meghan. The diamond, ruby and 22 Karat gold vermeil design has a charitable component like many of the jewels the Duchess has worn over the years. Ten percent of the proceeds benefit the Wild at Heart Foundation funding animal welfare projects.

The romantic 19th century French poem by Rosemonde Gérard, “Eternal Song,” that inspired the pendant has been inspiring jewelry designers since it was written. In the vintage world, the pieces are referred to as “+ qu’hier – que demain,” the same words on the front of the Lis jewel.

The famous couplet of lines from the poem are: “For, you see, each day I love you more, Today more than yesterday and less than tomorrow.”

Did Harry give the jewel to Meghan? Most likely he did. The message certainly feels apropos to their union that has remained strong against all odds.

How I Knew Meghan Would Wear Cartier on Her Wedding Day

Meghan’s Jewels Say A Lot During the Oprah Talk