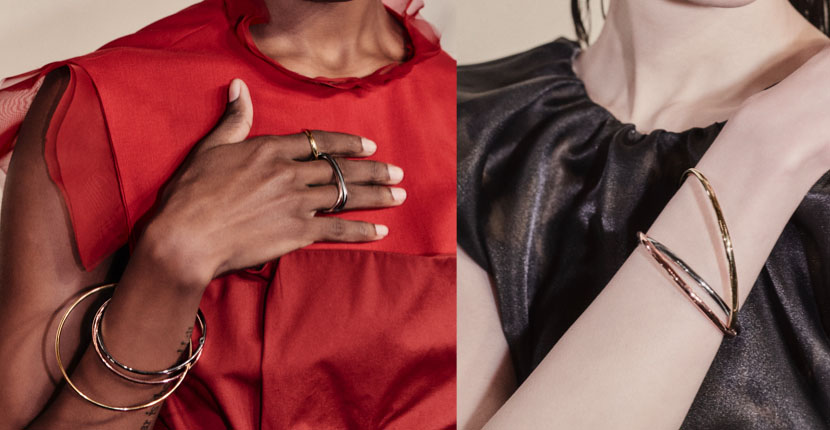 March 9, 2022—Cartier’s Trinity ring has been given a radical makeover by the French jeweler and Japanese fashion designer Chitose Abe of Sacai. While the capsule collection is small, just six pieces, it’s a big deal to play around with the iconic design in such a dramatic way.

The striking new Trinity jewels alter the scale and proportion of the original. Single bands in bracelets are blown up over the arm. Rings have parts spread out over several fingers. Earrings stretch over the lobe. All the new jewels make use of the movement of the three interlocking bands in the classic Trinity ring.

Some might say the new looks are overdue. Others might be aghast. The original Trinity, after all, is a beloved classic with roots going back almost 100-years at Cartier.

In 1924, Louis Cartier oversaw the creation of the Trinity ring with three intertwined bands of white, yellow and rose gold. The colors of gold symbolize different qualities. The white stands for friendship. The rose represents love. And the yellow is for loyalty.

It’s a romantic idea and one that aligns with one of the first, if not the first person, to own a Cartier Trinity ring, Jean Cocteau. The French poet layered two of the rings on his pinky finger.

Other luminaries who have owned the gender free Trinity Rings include Hollywood stars of the silver screen Gary Cooper and Grace Kelly.

While the Trinity for Chitose Abe collection marks the first time Cartier has worked in concert with a fashion on the iconic design, it’s not the first time the jeweler tweaked it. Over the years, the three rings have been transformed into bangles that echo the original interlocking bands. They have been made into hoop earrings.

Trinity has also functioned as the stations on a chain necklace. Catherine, Duchess of Cambridge (aka Kate Middleton) wore hers shortly before the London Olympics in 2012 and the fashion press interpreted the piece as a hat tip to the Olympic rings.

A couple of days ago in Paris, the Cartier Trinity for Chitose Abe jewels publicly debuted at the fashion designer’s Sacai Fall/Winter collection presented at the Hôtel de Ville. Cartier’s signature red color inspired some of Chitose’s clothes seen here on the models.

The display marked a culmination of the collaboration that began in 2019 when Cyrille Vigneron, the President and CEO of Cartier, and Chitose began their “creative exploration” of the Trinity collection.

The limited-edition Cartier Trinity for Chitose Abe collection will be rolled out slowly around the world during 2022. It will drop in Japan during the Summer, then be available in Paris, London, New York and Seoul in the Fall.