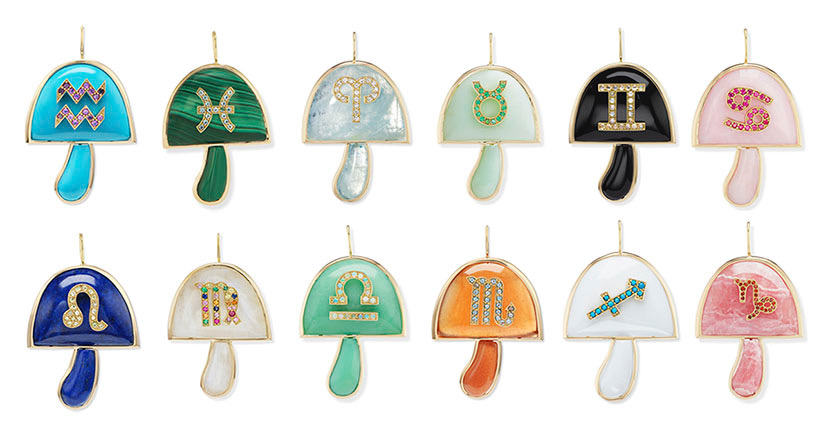 The designer has reimagined her signature lucky charm

July 13, 2021—Talismans are as integral to jewelry as gems and precious metals. Like so many things in jewelry-land, they can be dated back to the dawn of time. Quite possibly their peak in popularity was the Victorian era when the jewelry-loving Queen of England brought so many lucky charms into vogue.

With all the various types of amulets made over the millennia it’s hard to come up with something new and different today.

Yet, Brent Neale has managed it with her magic mushrooms. While there have been mushrooms made by jewelry designers in the past, no on one has transformed the fungi into an amulet in quite the same way.

Colorful, cute and borderline camp, Brent made her first shroomie in 2018.

“They were part of a collection called Down the Rabbit Hole,” explains Brent. “It was inspired by Lewis Caroll’s Alice in Wonderland. I was thinking of motifs I could pull from the story. The Queen of Hearts occurred to me but then I thought I want to do something really different and the mushroom popped in my head, the one the caterpillar sits on. And there is the sculpture in Central Park inspired by the story that has Alice sitting on a mushroom surrounded by her friends, the Mad Hatter and the White Rabbit. All of it made me think, mushrooms are cool.”

Brent’s first shroom was composed of moonstone and diamonds. “It sold immediately then I made four more right away,” says Brent. The mushrooms rapidly became the designer’s most successful motif. Blake Lively is among the style’s legions of fans of the collection.

Each pendant is one-of-a-kind and composed of specially cut colorful gems. Often they are sprinkled with small round stones that look like the polka dots that exist on some mushrooms.

Brent’s newest crop of mushrooms sparkle with gems in the shape of zodiac motifs. You could say she is layering lucky charms in one emblem and you’d be right. And why not? The signs of the zodiac add a layer of personalization.

Like many of her clients, Brent feels the mushroom pendants are her lucky charm. For Brent, they take her back to memories, or actually the mood she felt when she first read Alice in Wonderland. “It is fantastical, when you are little those things almost seem like they could happen. Having mushrooms so large that you can sit on them.”

“I have worn one every day since we made them and I am now superstitious about them,” explains Brent. “In fact, at an out-of-town trunk show someone bought the one I had been wearing right off of me. For the flight home I borrowed one they had at the store to wear on the plane then shipped it back. I didn’t want to fly without one.”

So, what’s the moral of this story on lucky charms? Well, I could say a lot, but my favorite part is that these mushrooms, the joy and comfort in jewelry that makes us feel a sense of security and wonder.

Oh, and I have a bit of a coda to this jewelry fairytale. If you want a Brent Neale talisman, but for whatever reason a mushroom isn’t right for you, she makes hamsas too. Gwyneth Paltrow sported her Brent Neale rendition of the ancient talisman recently in a video for Vogue.