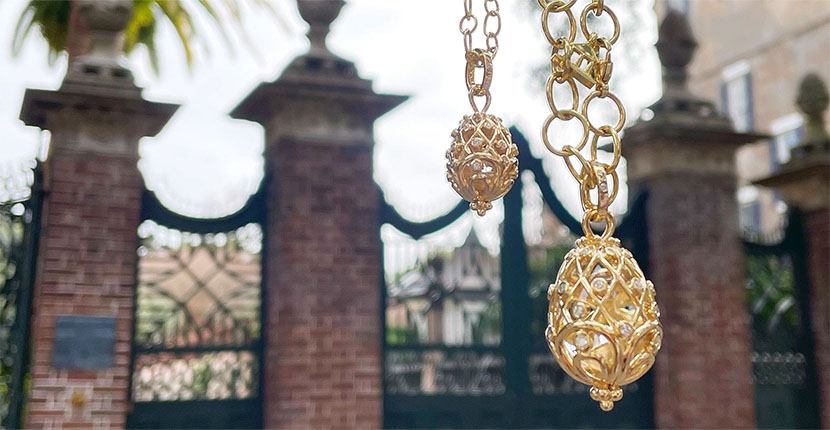 April 11, 2022—”These diamonds have always brought me luck.” So said the late great Dame Elizabeth Taylor in the 1991 television advertisement for her best-selling fragrance, White Diamonds. Since prehistoric times (way before Larry Fortensky), jewelry has been worn around the world for its talismanic powers, and its abilities to attract good fortune and repel bad luck. More recently, Andy Warhol secretly wore elaborate diamond jewels underneath his signature black turtleneck, believing the stones would ward off evil.

Temple St. Clair, the inimitable designer known for her mystical-inspired creations, has been making her signature rock crystal amulet for more than 30 years. Legions of jewelry lovers around the world adorn themselves with Temple’s “wearable treasure,” often piling on multiple charms for additional and luxurious armor.

Temple says she is “never without” her own rock crystal amulet. Now she has added three special editions of the luminous bauble, each inspired by the architectural details of enchanted locations in Charleston, South Carolina and available exclusively at Croghan’s.

“My relationship with Charleston goes back to my teens when my family moved from Virginia to South Carolina,” explains Temple. “While living in Italy in my twenties, I would always come home to Charleston. I showed my first creations and established my first collectors in my mother’s house on Legare Sreet!”

Charleston is known as one of the most popular travel destinations in America. The Holy City’s charming streets of colorful antebellum architecture are lined with Spanish moss hanging (somewhat ominously) from towering Oak and Cypress trees; church bells ring regularly from high steeples marking the skyline.

One would be well advised to wear multiple Temple St. Clair pendants for protection and security. Each of the new amulets are tied to a particularly spooky Charleston story.

The intricate scrolls and swirls of 18K yellow gold that wrap around Temple’s Sword Gate Amulet pay homage to the iron gates that enclose the Sword Gate House.

Built in the early 1800s, the house became a girls’ school, governed by Madame Talvande. The strict headmistress felt dejected and humiliated after one of her students scaled the school’s walls and managed to escape and elope with an inappropriate boyfriend. In hopes of preventing any copycats, she contrived a haunting and gruesome plan, and built a high wall around the school topped with broken glass bottles.

Temple’s Sword Gate Amulet will avert any malice brought on by Madame Talvande, who is said to still be wandering the halls of the house, keeping a watchful eye on her girls!

The gate of another historical Charleston home, the Simmons-Edwards House, is topped with finials in the shape of Italian pinecones which are mistaken by most people for pineapples. In fact, the house is nicknamed Pineapple Gates. It inspired the crown-like design of Temple’s Pineapple Gate Amulet. Bezel-set diamonds are stunningly mounted within the spaces of lattice-like 18K gold.

Hold on tight to the amulet when visiting the Simmons-Edwards House, where an unknown and shadowy couple has been reported walking hand in hand on the street.

And finally, there is the Rainbow Row Amulet.

Rainbow Row is, just as it sounds, a stretch of colorful (some of Charleston’s oldest) houses originally built in the 1600s. Rainbow Row’s proximity to the water made it a prime location for pirates and sailors. The Pink House was believed to have been at times a tavern and brothel, undoubtedly a place that witnessed rampant boozing and hustling.  A crooked pirate has been spotted walking up and down the stairs and hallways; sometimes mysterious handprints appear on the windows, and one can hear the sound of footsteps.

Temple’s Rainbow Row Amulet is set with aquamarine, pink and yellow sapphires, peridot, tanzanite and amethyst (all over rock crystal), and is a dazzling and kaleidoscopic miniature of the houses. I suspect it will bring just the type of good juju Elizabeth Taylor had with her diamond earrings!