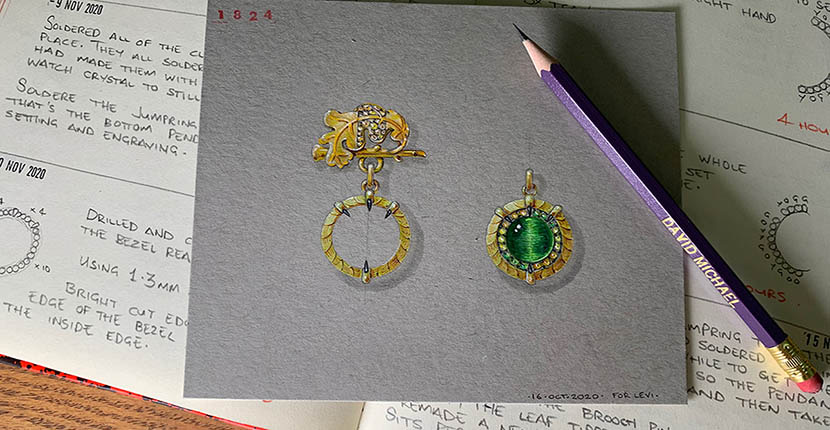 David Michael rendering of the jewel made for Levi Higgs on top of a work diary. Photo courtesy

This is the story of a jewel, from inception to completion. I wanted to chronicle a story that has helped me focus on something outside myself during this past difficult year. I keep referring to the idea as “pandemic jewels,” but there must be a better moniker to dub it. Imagine scooting to Christie’s, Sotheby’s, or Phillips in the year 2135 on your hoverbike, dodging Jetson-like cab-mobiles and robotic pedestrians along the way, and coming to a halt under a holographic banner for their December Magnificent Jewels Sale, “Great Pandemic Jewels of the 2020s.” One recurring theme during this episode of drudgery is that treasured objects, specifically jewels, have had the power to become beacons of hope, amulets against the whirling vortex of nonsense and sadness out in the world in 2020, and I knew I wanted one for myself. 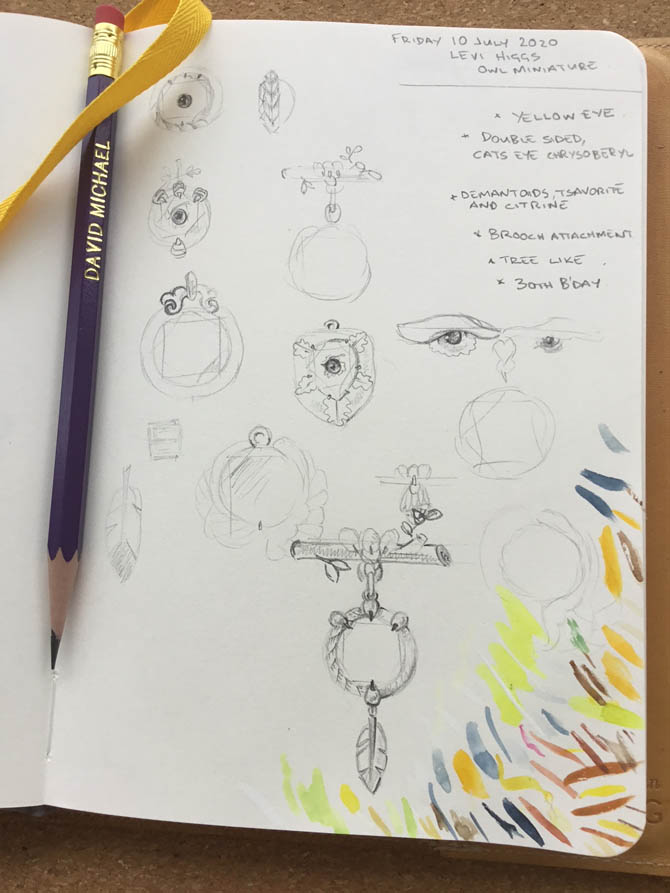 What will define our time in quarantine? We have seen so many protective talismanic pieces, zodiac pendants, and personal emblems of empowerment and they couldn’t be more appropriate. My own jewelry journey this year started nearly nine months ago, in fact, while researching an article on Lover’s Eyes, what I considered to be the perfect Pandemic Jewel. They were originally meant to convey messages of love while those one cared about most dearly were away for long periods of time. I interviewed Elle Shushan, a Philadelphia-based dealer of portrait miniatures who contributed to the 2012 book, The Look of Love: Eye Miniatures from the Skier Collection.

I also interviewed Michael Robinson, one of the twins behind David Michael Jewels based in Australia. Michael is a fan of portrait miniatures and lover’s eyes as well, and has been known to paint very detailed dream jewels-to-be, featuring the favorite stone combinations of the recipient, as well as a poignant eye. The Adventurine’s Marion Fasel has one with her dog Hunter’s adorable eye rendered in the center along with a jeweled H, and I have a hand-painted and bespeckled Mark Rosen’s eye, my partner of ten years, done with kunzite and amethysts. 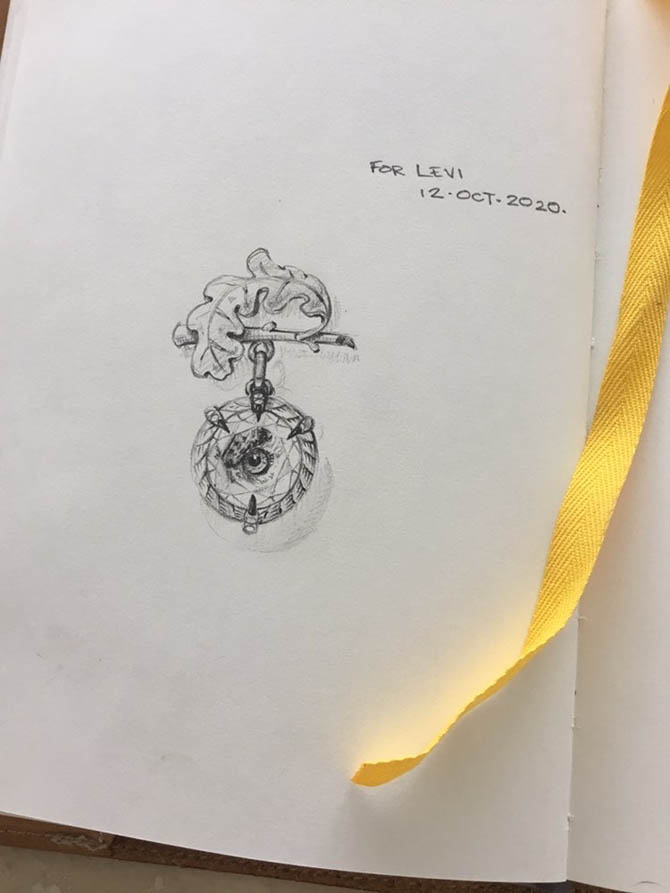 After the article was written and published in May on The Daily Beast, I couldn’t stop thinking about the portrait miniatures and lover’s eyes. Michael paints so beautifully, as you may have recently seen his Winter Koi Pond brooch at Sotheby’s that sold for $52,920. The jewel features a hand-painted koi fish on black mother-of-pearl under icily-included rock crystal.

I knew they took special commissions, and with my 30th birthday approaching in mid-September, that was justification enough for me. Besides, all the taxis not taken, plane tickets and hotels not booked, and nowhere to wear the new clothes I hadn’t bought added up. I think every friend I spoke to during lockdown had had big plans this year, and it felt like it was going to be a pivotal time in many of our lives, in our careers, and with big ideas supposed to come to fruition. Little did we know. 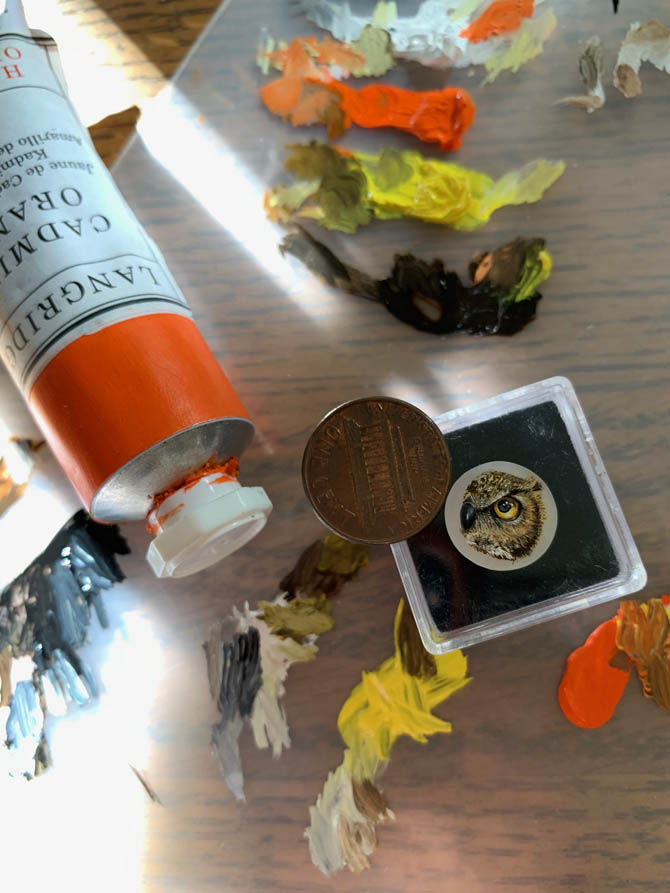 All through June and July Michael and I spoke via DM and text, just floating the idea of what a custom portrait jewel could entail. I wanted it to be unique, which any piece by David Michael Jewels would be by default. One of the jewels I had included in my article had a double-sided rock crystal watch face that had the eyes of the owner’s beloved dogs. I liked the symbolic nature of having an animal’s eye incorporated into the piece, so naturally, we came to the idea of an owl’s eye.

I have always liked owls, but only recently began talking about them. If I had to pinpoint events that lead to this being so, I’d say perhaps the interest stems from spotting one huge barn owl out my window one snowy morning in Wyoming growing up, sitting high atop a telephone pole. To me, they represent the forest. I’m a Virgo, an Earth Sign, and I feel most at peace while hiking through a mountain path, the mist retreating in my wake. While researching the exhibition (now on hold until 2021) A Walk in the Woods for David Webb in 2019, we included many fabulous owl jewels from David Webb’s archive. This is what spurred the creation of my owl coin ring that I had made at David Webb when we finished the catalogue. 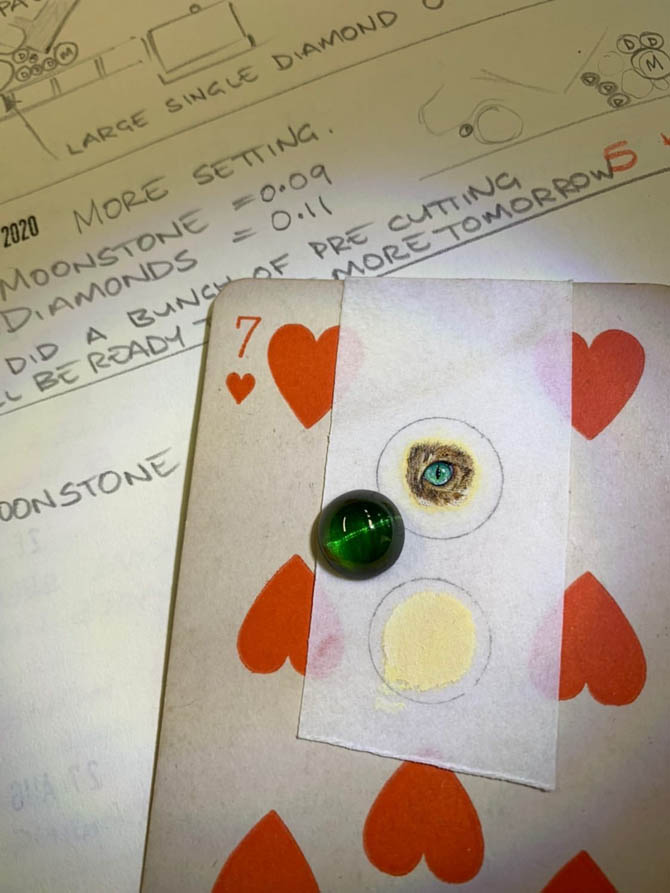 As Michael and I turned our talk of painted eyes to owls, more ideas for the piece emerged. I was fascinated with a cat’s eye chrysoberyl that could potentially be the other side of the pendant. I was interested in the duality of a stone that could represent a fiercely yellow owl’s eye glinting through the fir boughs, while also sporting a portrait of an eye on the reverse. I loved that the stone was optically like an eye, but also sort of a mysterious green color, like something that would loom out of the forest’s undergrowth in the moonlight. It had a vaguely Art Nouveau aesthetic to it as well, which I liked for its connection to nature.

I started to ask around in the gem dealing community, looking for a stone that would be appropriately colored, sized, and have a strong cat’s eye effect. The consensus came back that I should look into a cat’s eye tourmaline for better hue and scale. I was put in touch with a dealer in Brazil, and the WhatsApp-ing commenced. I went back and forth on several sizes and variations of green, but finally chose the exact right stone. It was shipped to Australia in late summer, and by September, the jewel was underway with Michael’s expert guidance. 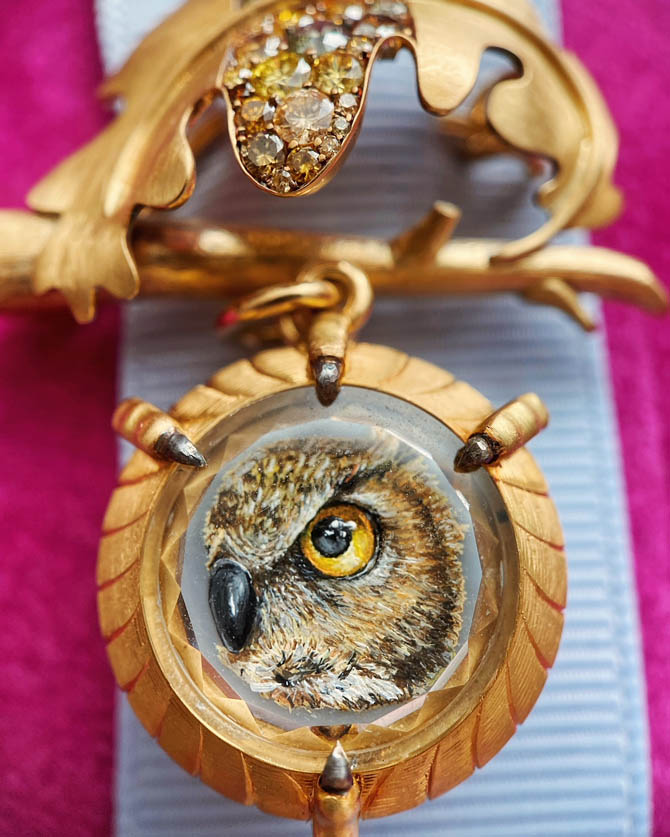 I had approved the designs, but every once in a while over the course of the autumn, I’d get a text that would show an obscured angle or darkened picture (so as to not reveal too much of the finished piece) and I’d get to weigh in or approve an option. We got to talk about pinbacks, closures, secret details only I’d notice. Michael also chronicles his daily work at the bench with a diary entry for each day, so he can keep track of his work and time. He doodles mechanical schematics of the jewels in the margins and it is a truly unprecedented look into a master’s process and mind that every historian wishes existed from their jewelers. 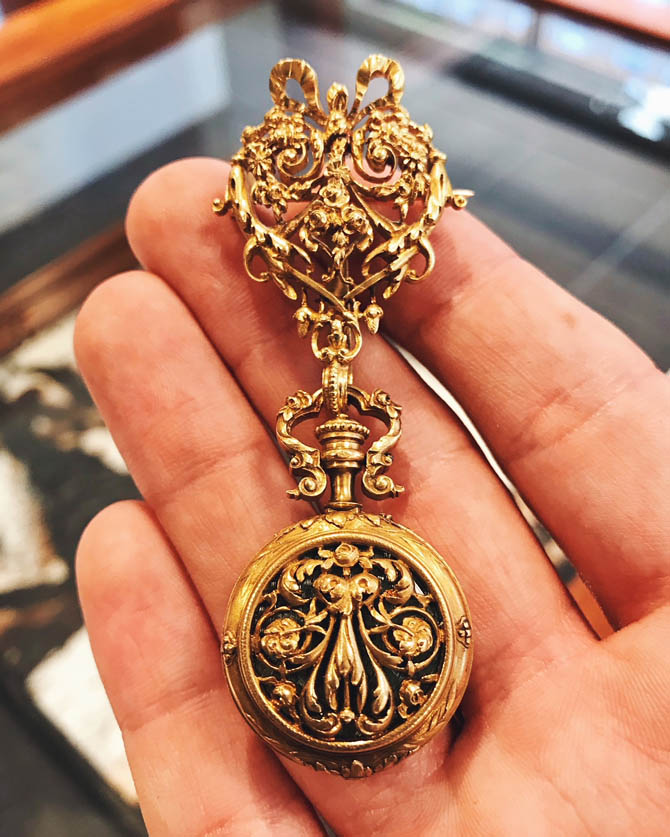 We also came to discuss the idea of being able to wear the pendant as a brooch, with an extra fitting allowing for the pendant to hang down, like a heraldic medal or a watch brooch, similar to this style illustrated above by Boucheron. 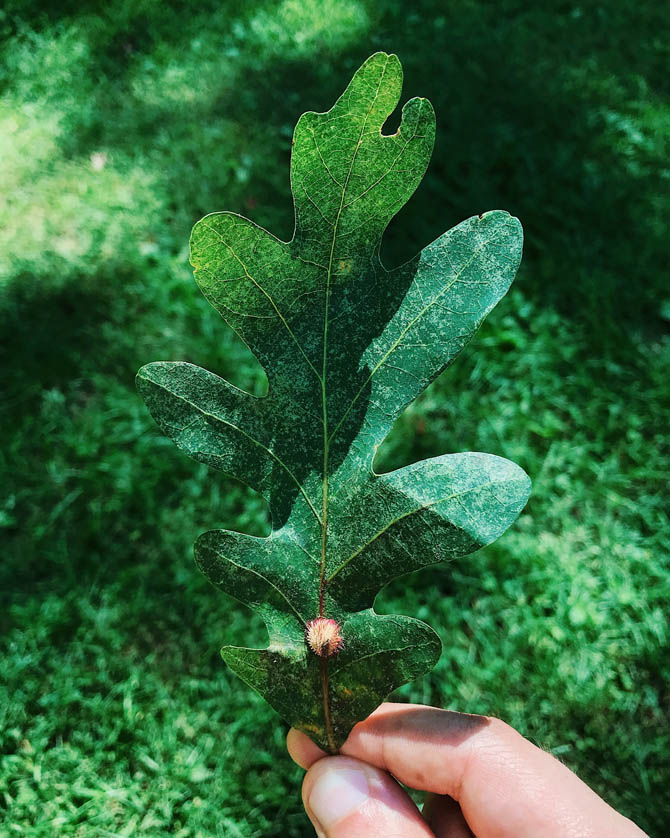 On a trip to Storm King in August for my partner’s birthday, I picked up a perfect oak leaf and sent the image to Michael for inspiration for the brooch top. Oaks are the eldest and mightiest kings of the forest, and have been used symbolically for powerful families like the Gilded Age Vanderbilts. I thought it was an appropriate leaf for an autumnal-inspired brooch. 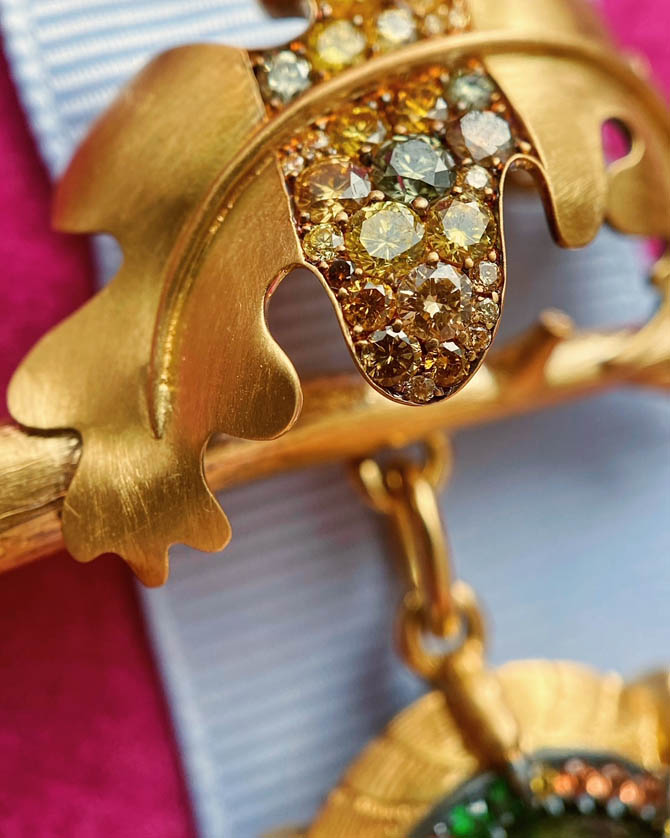 The cat’s eye tourmaline and painted owl eye now were planned to hang off a textured gold branch with a swooping oak leaf above that would serve as the brooch fitting. The tourmaline would be surrounded with yellow and orange sapphires, and tiny bright green tsavorites, and the oak leaf would be set with a melee of autumnal-colored Australian diamonds. 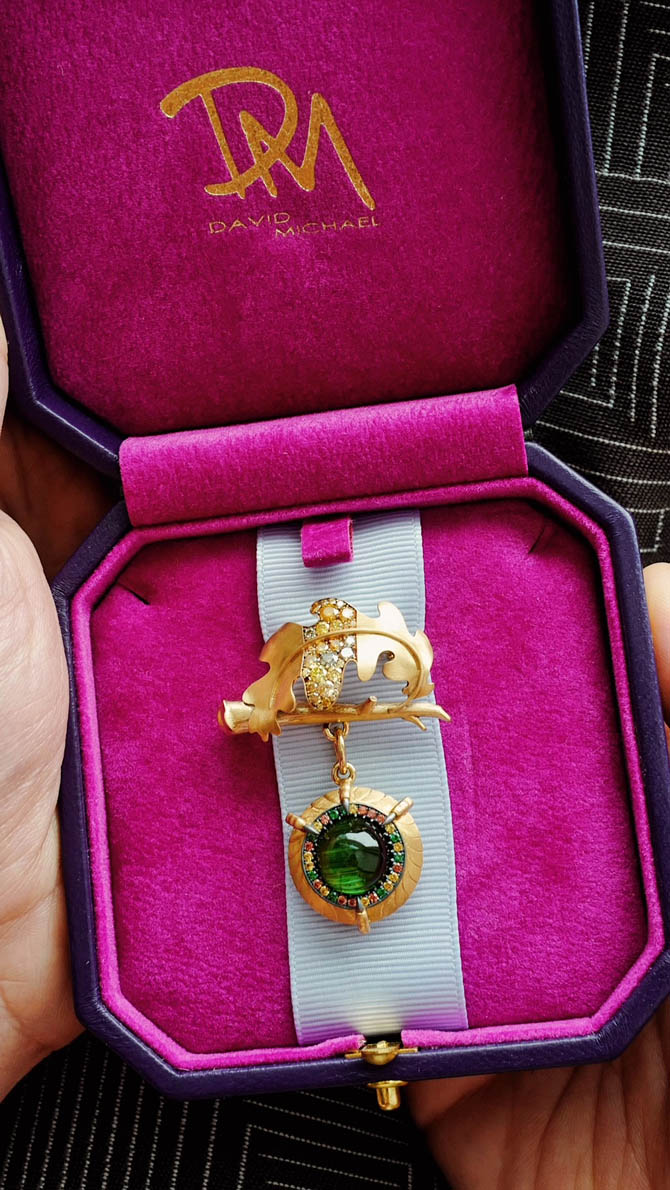 Front of the jewel made by David Michael for Levi Higgs. Photo courtesy

Once it was all finished and shipped, I was mad with excitement. Months of planning and anticipation had built to this. Seeing the piece in person for the first time was so thrilling. Together we had come up with this beautiful object I will treasure forever. It will mean all the symbolic things I wanted it to mean, it will be a grand 30th birthday gift to myself, but it will also be a testament to the fact that even in this year of hardships, good things can be birthed out of a shared creativity. 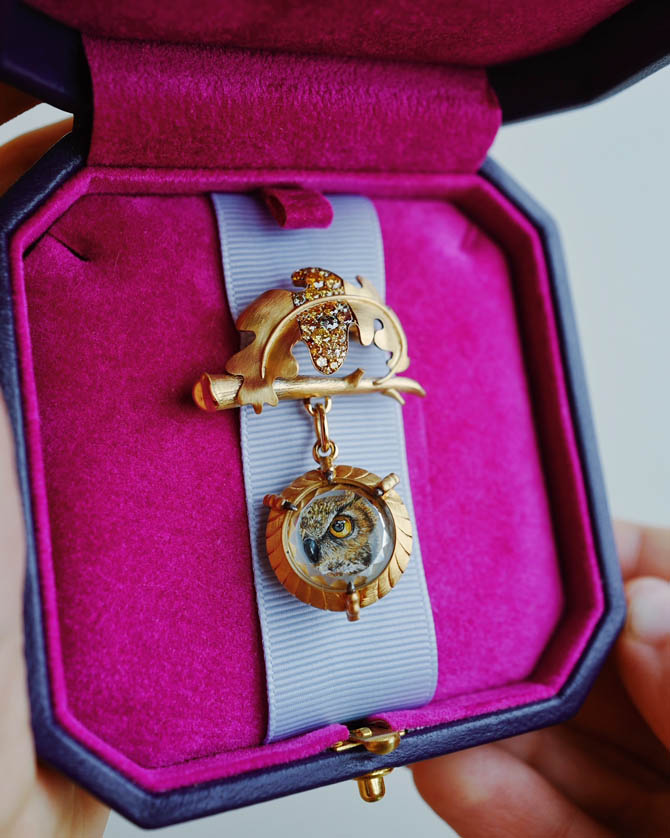 Image showing the owl on the reverse of the pendant in the David Michael commissioned by Levi Higgs. Photo courtesy

Becoming a patron of your favorite artist or jeweler or designer is a wonderful way to support them in this time, and fill the world with more fascinating jewelry the public can one day ponder from a completely removed context of the mess of 2020. Here’s to a fruitful, healthy, and calm 2021, with even more collaborations and commissions.

Jewelry Designers and Influencers on Talismans