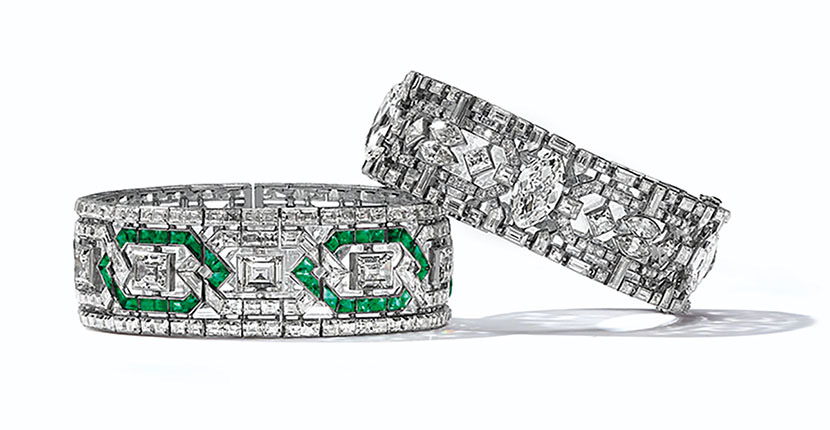 Falling in Love with Jewelry All Over Again

It happened at Christie’s

July 27, 2020—For so many of us in the jewelry field, it is as much of a passion as a profession. I started working in jewelry as an archivist immediately after I graduated from college. My enthusiasm has only grown over the years as I have handled and had the chance to study way more than my fair share of treasures.

During the decades I worked for Ralph Esmerian who, at the time had one of the finest jewelry collections ever assembled, it would not be unusual for me to have Empress Eugénie’s bow brooch by Kramer (currently housed in the Louvre) on my desk or any number of masterworks that are now in the Cartier Collection, the Van Cleef & Arpels Collection and the Tiffany Archives.

In the course of writing nine books on the history of 20th century jewelry and just generally being around for big events, I have had the opportunity to closely review a long laundry list of pieces. I vividly remember every instance when I have been able to hold Elizabeth Taylor’s 33.19-carat Krupp Diamond that was rechristened The Elizabeth Taylor Diamond when it was sold at Christie’s in 2011.

I spent a lot of time in Rome working with the archivists at Bvlgari while I was writing the Bvlgari Collection trilogy of books Serpenti, Monete and Bvlgari-Bvlgari. Lately, I have been working with archivists at Boucheron, Cartier, David Webb, Mellerio and Verdura among other places on the exhibition I am guest curating at the American Museum of Natural History, Beautiful Creatures: Jewelry Inspired By The Animal Kingdom.

The truth is handling treasure has been so much a part of my professional life, I really believed not being able to do so for a few months wouldn’t bother me. But it did. 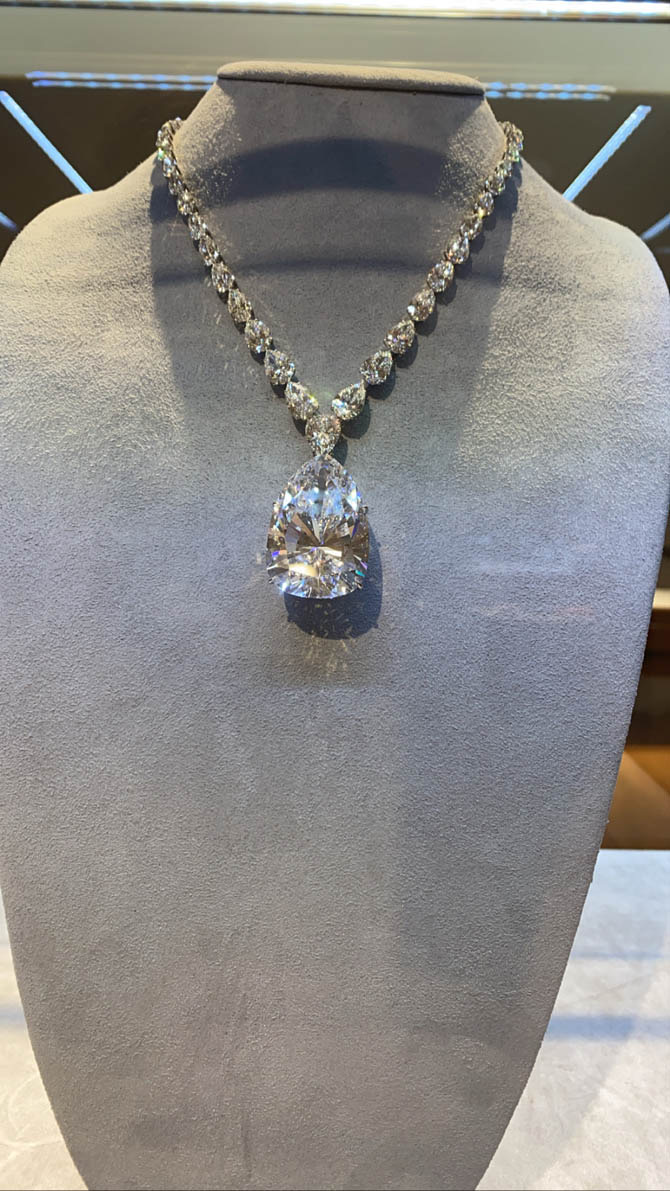 The last time I had a chance to peruse beautiful jewels was March 10 in Los Angeles with Neil Lane who I first met in 1992 when Penny Proddow and I were curating the Hollywood Jewels exhibition at the Academy of Motion Picture Arts and Sciences based on our book about the history of fine jewelry in the movies and the collections of movie stars.

At his boutique, Neil and I talked about jewelry history, as is our wont. He kept calling out, to no one in particular, while standing over cases filled with scores of jewels, “Where is all the jewelry? We don’t have anything here!” Obviously he did, it’s just when Neil and I get together we deep dive and he was looking for treasure with a capital T.

You see those of us that are passionate about jewelry want to study it and talk about it and share our stories about how it was made and where the gems come from. We like to really get into technique and every single element. Those of us who love it will travel to the ends of the earth to see it. Because we know there are few places in the world devoted to displaying the type of jewels we want to see, so we have to go out and find them. 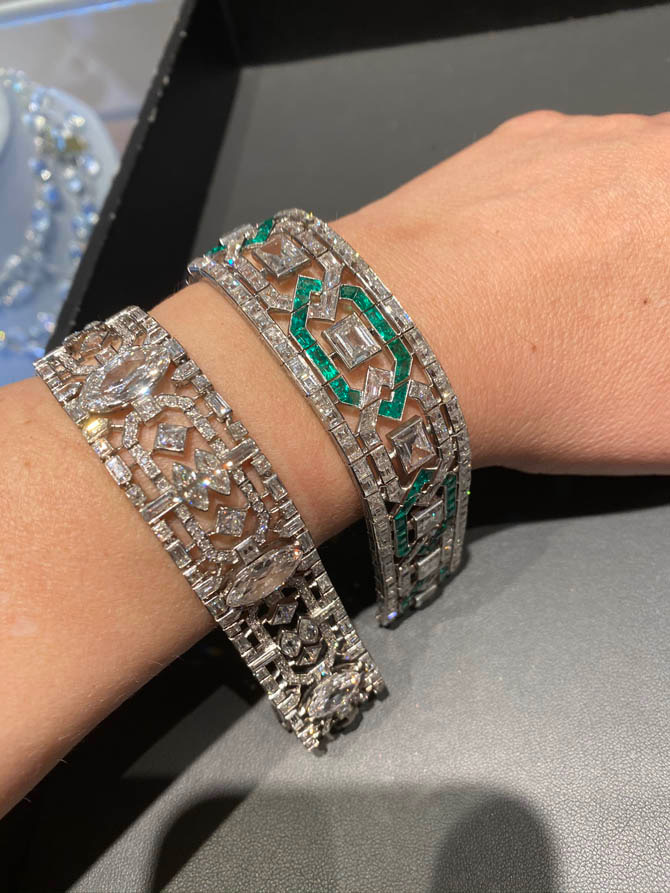 Anyway, I didn’t realize how much I missed looking at jewelry in real life until I learned Christie’s was taking appointments for the Magnificent Jewelry auction that is being held on July 29. I was a little too excited about the idea of going to see it. I had already previewed the sale for the press on Zoom, so I think the publicist was surprised when I asked if I could come in, but she also totally understood why I wanted to and graciously granted me a time slot on Sunday at 3pm.

The sale is astonishing, especially considering it was put together during a pandemic. In terms of logistics all safety measures were, of course, in place and the numbers at the viewing were kept purposely very small. With so few visitors, it was easy to see, more than ever before, all the staff that is required to put on a viewing. It’s a lot. And I couldn’t help but instantly equate the number of people with jobs and the fact that they were helping to make Midtown Manhattan less of a ghost town.

Before I headed up to the preview I had read in The New York Times about 1271 Avenue of the Americas, a building around the corner from Christie’s at Rockefeller Center that has been almost completely empty since the pandemic shutdown, because people are working from home.

The lack of workers, not to mention tourists, has been detrimental for the retail establishments, restaurants and food trucks in Midtown. I know the neighborhood and the 1271 building well. It was where the Time & Life publishing empire was located until relatively recently. I frequented it for years as a contributing editor of InStyle magazine. Mad Men used the mid-century modern building as a location. But I digress. 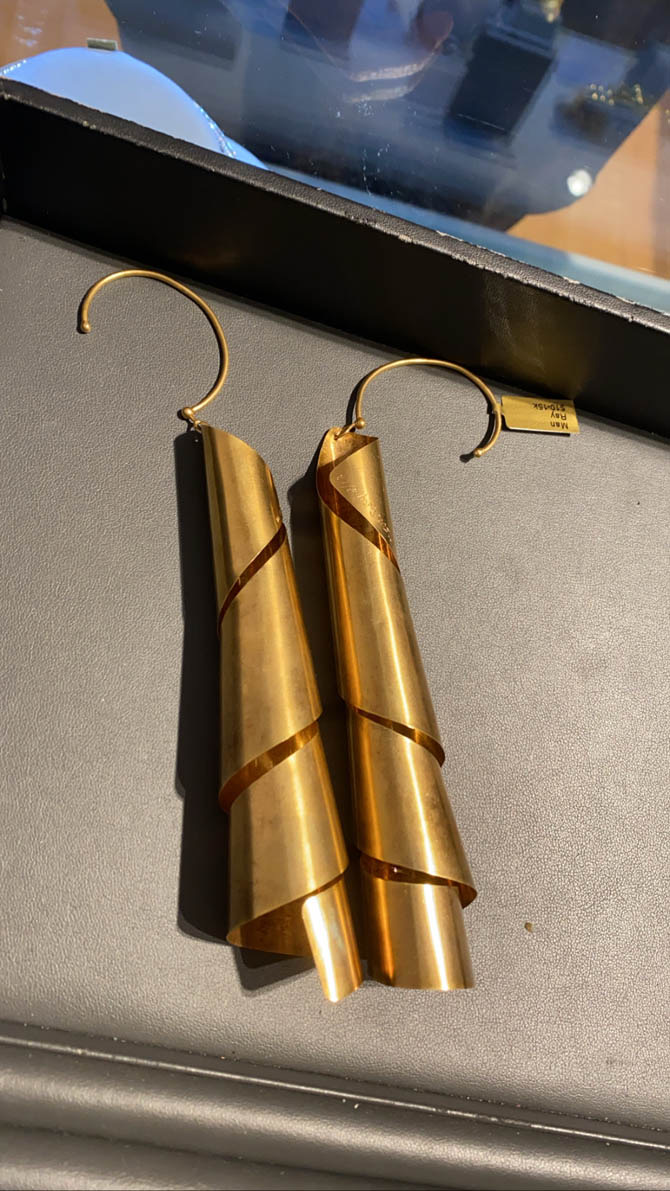 I had the pleasure of walking through the Christie’s sale with the brilliant Daphne Lingon, Christie’s SVP, Head of Jewelry Americas and wunderkind Claibourne Worth Poindexter who can easily give you chapter, line and verse of major and minor moments in jewelry history.

Next, we switched gears entirely and looked at the artist Man Ray’s pendant earrings created in 1968, a version of which was once worn by Catherine Deneuve. I had never seen a pair in person and was surprised to learn they were made of gold and not brass. 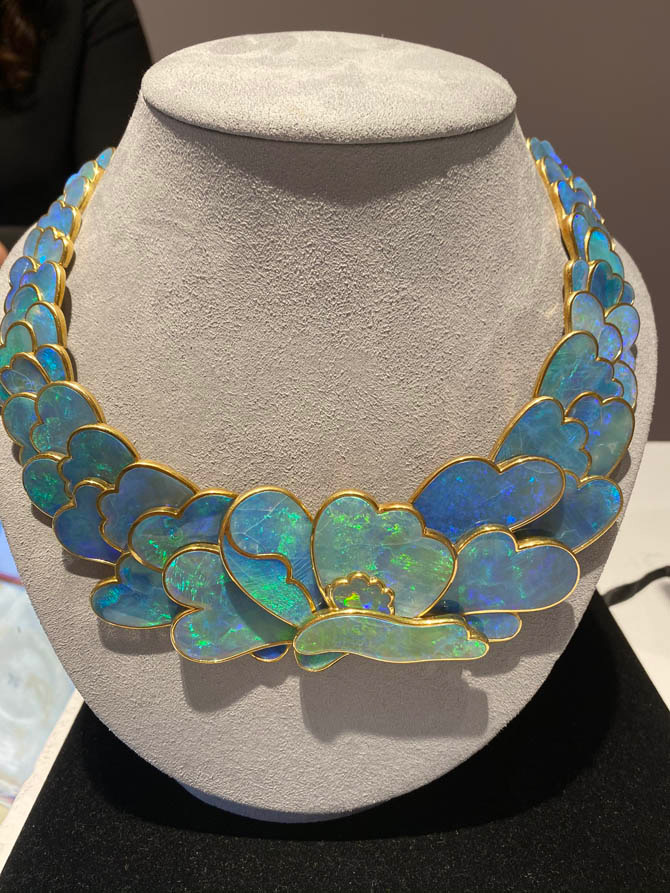 Then we jumped to the Jazz Age with two textbook wide bracelets by Lacloche Frères. The designs exhibited all the hallmarks of the Art Deco movement with geometric and fancy shaped gems and a lot of rhythm in the way the stones were set.

We slide over to a case filled with Gloria Manney’s eye-popping collection of jewels set with opals. Among all of them a necklace designed by Angela Cummings for Tiffany in 1982 with specially cut opals was my favorite. It is the type of jewel that gives 80s style a good name. Claibourne quite rightly pointed out how it had the same spirit as the vintage Cummings necklace Greta Gerwig wore at the Golden Globes. 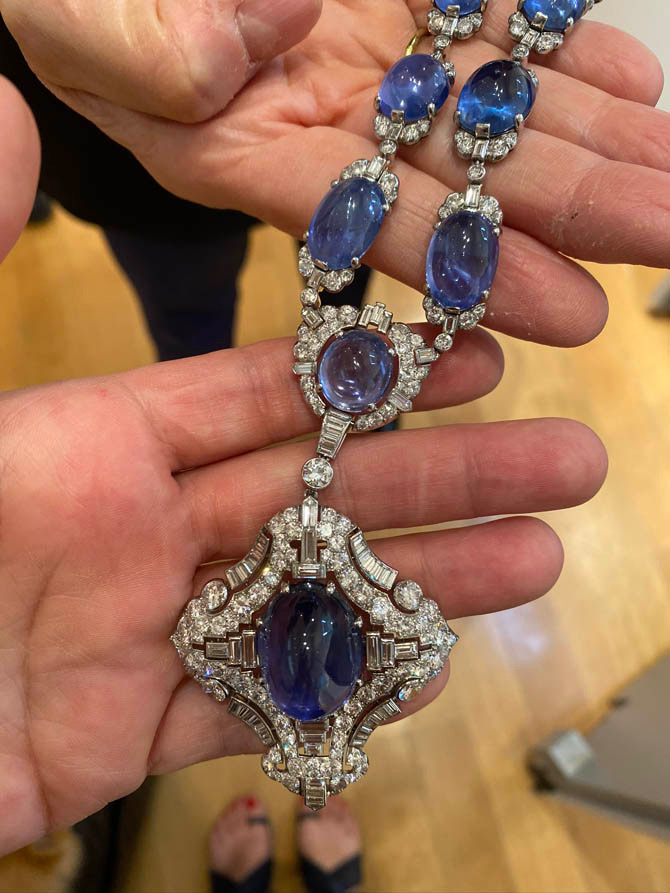 In the second room, we spent some time pouring over a Bvlgari Art Deco necklace. Bvlgari made some spectacular Art Deco jewelry, but most of it doesn’t have the signature look we think of from the Italian jeweler today. This necklace, however, does. It is a long sautoir set with dreamy cabochon sapphires that mostly came from the storied mines in Sri Lanka. The silhouette and the cabochons became signatures for the House during the 1970s.

There were lots of other great jewels in the sale we reviewed including pieces by Belperron, Flato and JAR. All of the best and the brightest jewels in the auction once again put into sharp focus why I have been so passionate about the subject for so long. These designs hold up a mirror to culture and society. They are a tangible treasures that take us on amazing journeys through the past.

Jewelry Fantasy Shopping During A Pandemic